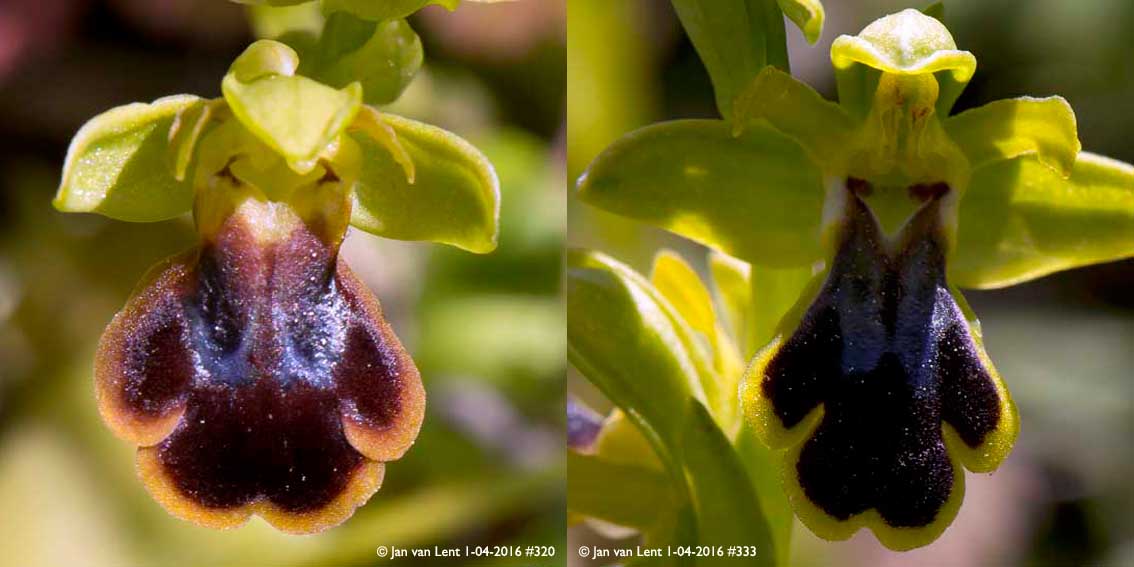 HUNTING: For the last 4 years I’ve been hunting in the area behind Avlonas and next to a steep path going to nowhere there are olive groves strewn with orchids. It is a very cosy gathering there; members of the Ophrys fusca family, the complete Ophrys umbilicata family, members of the oestrifera family, Ophrys homeri, Orchis morio with its small child picta, Neotinea maculata, hundreds of Serapias, and a complete set of different looking Ophrys blitopertha. It’s a lot of heavy work there, on the knees, spending hours making photographs and measuring the bloody lips and hoping that a pollinator will be so kind to mate with one of them, but in vain, no pollinators around. I always thought Ophrys blitopertha is easy: reddish or yellowish brown lip, yellow or orange lip edges, and a straight, flat, wedge-shaped prolapsed lip. There are tens of variants of course, and sometimes difficult to determine because of the hybrids with other members of the fusca family and the confusion with its sister species Ophrys persephonae.

And after hours of staring at my computer screen and comparing and comparing I came to the conclusion that there is a black sheep in wolf’s clothes in between those blitopertha. This intriguing other species, with an almost black lip and a vivid yellow edge around the lip, almost the same yellow-green colour as the sepals and petals, not plump but elegant, some dark blue in the speculum and often with two black lines in the stigmatic cavity which look like mascara. What could it be? Who is the only other one in this group – made by PAULUS in 2001? Ophrys persephonae of course, the queen of the underworld! But, but… 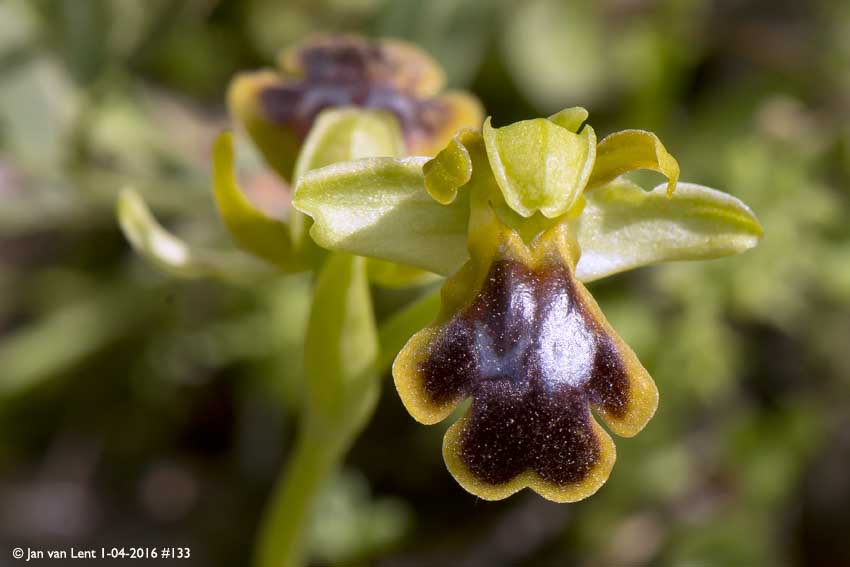 Look at the photographs I made on the 1st of April this year (and no, it’s not a joke) the very colourful almost circular lip of the left Ophrys compared to the slim, almost black lip of the Ophrys on the right; the same taxa? Both Ophrys blitopertha?

That description also almost fits my ‘black’ persephonae, but it is not spindly, much taller, it has more flowers and the lip is definitely more slender. 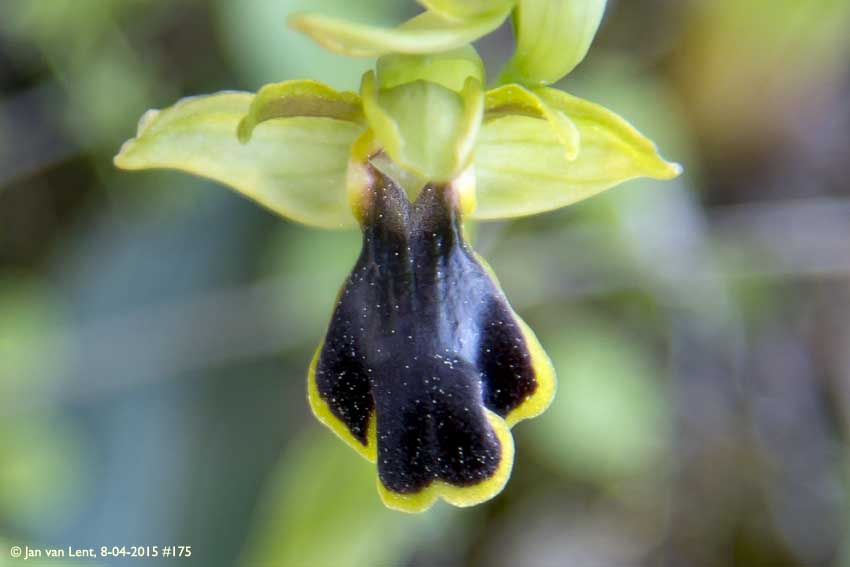 DELFORGE (2005) Ophrys persephonae: ’As O. blitopertha but robust, 30-40cm tall; 4-5 (-9) flowers, more brightly coloured; lip (near) horizontal, appearing a little less straight, slightly more transversally convex in centre, 9-13mm x 8-10.5mm; lip hairs denser, much darker, speculum larger, contrasting, shiny, entirely pale blue or blackish blue, purplish, and with 2 pale blue crescents at tip, forming a large, contrasting W; stigmatic cavity larger.’
KREUTZ (Rhodes & Karpathos 2002): ‘Ophrys persephonae is distinctly taller, has more flowers and usually grows in light woods. Ophrys blitopertha is in contrast a smaller, more delicate plant with few flowers, which mostly grows in very sunny fields. The colour of the speculum on Ophrys blitopertha also hardly stands out from the very dark labellum and rarely reaches up to the stigma.’
ANTONOPOULOS (2009): ‘It (O.persephonae) differs from the latter (O.blitopertha) in that it prefers different habitats (semi-shaded locations to thin coniferous forest), the colours of its speculum are stronger, it has a taller stem and exhibits a slightly stronger curve of the lip on the long axis. It also flowers a little earlier than Ophrys blitopertha.)
PETROU et al (2011): ‘Ophrys blitopertha may be confused with O. persephonae, which, however, is a robust plant, and its lip has an obvious, shiny speculum without an orange base, and an orange border. Ophrys persephonae may be confused with O. blitopertha, which, however, is a slender plant, with light-coloured lip base, a dull speculum and a yellow border.’
ALIBERTIS (2015): ‘It (O. persephonae) is a taller plant than O. blitopertha (up to 35 cm) and with more flowers (3-6). Green perianth. Small/medium-sized lip, barely more longish, +- horizontal, less stretched, without a base-relief and with a small transverse curve at the mid-point. Pilosity of lip brown-violet, denser and darker. Speculum wider, maybe shinier, pale gray-blue or blue black-violet, with two crescents at the top that form a W blue or bluish, +- discernible. Wide edges, totally leveled throughout all the contour of the lip, orange to brown-orange, but also green-yellow that a little before the stigmatic cavity seem as though they are fins. Pollinator: It remains unknown.’

In the literature you will only find Ophrys blitopertha and persephonae, but if you go on the Internet you will find that there is a new phenomenon – to remain in sub-scientific style – in the group, since 2009, answering to the name Ophrys urteae. Urteae? Not Ureae? Was it not this yellow-green colour which inspired PAULUS (2009) to name this species urteae? Because it was not the beetle Urtea graeca, a species of beetle in the family Lymexylidae, which inspired him for this new name; he wrote that the black bug Blitopertha nigripennis should be the perpetrator. Well, at least the black colour you can find back on the lip of my ‘Avlonas’ species.

PAULUS (2009): ‘Close to Manavgat – Serik in Anatolia two populations of an Ophrys very close to O.blitopertha but differing by smaller flowers and another pollinator. O. urteae is a plant 6 – 15 cm tall bearing 1 – 3 (- 6) flowers. The very flat and dark lip is 9 – 12 mm long (m = 10.5 mm) which is significantly smaller than the lip of O. blitopertha, the length of being 12 – 15 mm (m = 12.9 mm).Both species are pollinated by Coleoptera, Scarabaeidae and Rutelinae; O. blitopertha by Blitopertha lineolata  and O.urteae by Blito-pertha nigripennis. B. lineolata is distributed in south-east Europe, in Aegean Anatolia and on the eastern shores of the Black Sea. On the other hand, B. nigripennis inhabits Cyprus, southern Anatolia east of Antalya and some regions of the Middle-East. The two areas are close together in Antalya but don’t overlap as far as is known for the time being. The Antalya meridian seems to mark the limit between the two species, with O. blitopertha in the west and O. urteae in the east.’

BOTTOM-LINE: From all the Ophrys descriptions in the books, the description of Ophrys persephonae is the most vague and the photographs of the researchers – who ‘did’ the queen of the underworld – are all different.
ALIBERTIS (2015): ‘The plethora of new names unfortunately creates all these problems and as a result there are many who name plants that apparently are not those that their photographs show. We noticed that on the internet as well as in recently published books-guides.’
Is that maybe also the reason that HENNECKE & MUNZINGER (2014) intuitively & completely forgot Ophrys blitopertha, persephonae & urteae in their ‘Neue systematische Gliederung der Gattung Ophrys: subgenus Ophrys’?

Also the pollinators are very different according to Paulus & the books, Ophrys blitopertha is said to be mated by the males of a small cockchafer, Blitopertha lineolata and the pollinator of persephonae is not known. But to remain in mythological style: probably the bee Andrena hadesae*. Even Paulus didn’t find a pollinator for his queen: maybe it died immediately after the – pseudo – copulation, that happens sometimes in nature…

There are not so many orchid researchers who described Ophrys persephonae, let alone Ophrys urteae, but everybody described Ophrys blitopertha and showed some photographs. And there the confusion starts – with the photographs. Questions: Is the light or dark brown plant Ophrys blitopertha? And is the fat, or the elegant black plant Ophrys persephonae? Come on, why should you give a fat brown Ophrys with a wedge-shaped lip the name of the queen of the underworld who – in every illustration – is portrayed as a beautiful lady? And why give the almost black and most elegant ‘fusca’ looking Ophrys of the group the name of this ugly fat lineolata bug? Or is also on Lesvos – once upon a time part of Anatolia – the bug Blitopertha nigripennis around, armed with his black ‘feathers’ – to paint Ophrys blitopertha black to create a new species: Ophrys urteae**?

*The lyrics of the song ‘From The Underworld’ are based on the story of Orpheus and Eurydice in their flight from Hades. In Greek mythology, Eurydice was a woman or nymph, and was the wife of Orpheus. While fleeing from Aristaeus, she was bitten by a serpent and died. Distraught, Orpheus played such sad songs and sang so mournfully that all the nymphs and gods wept and gave him advice. Orpheus travelled to the underworld and by his music softened the hearts of Hades – the king and Persephone – the queen of the underworld, and even made the Furies weep. Orpheus was allowed to take Eurydice with him back to the world of life and light. Hades set one condition, however: upon leaving the land of death, both Orpheus and Eurydice were forbidden to look back. The couple climbed up toward the opening into the land of the living, and Orpheus, seeing the Sun again, turned back to share his delight with Eurydice. In that moment, she disappeared for ever. Later on Orpheus was killed by the wild woman of Thrace; his head was thrown in the river and floated out to sea to the island of Lesvos. The muses of Lesvos found his head – still singing, with his lyre – on the beach near Andissa and buried it on the foot of Mount Olymbos (actually a cave on Mt. Fouga, between Andissa and Lapsarna). To this day, the nightingales sing more sweetly there than anywhere else. (see Blog 35: Orchis purpurea on Mt. Fouga: www.janvanlent.com/blog/?p=2819)