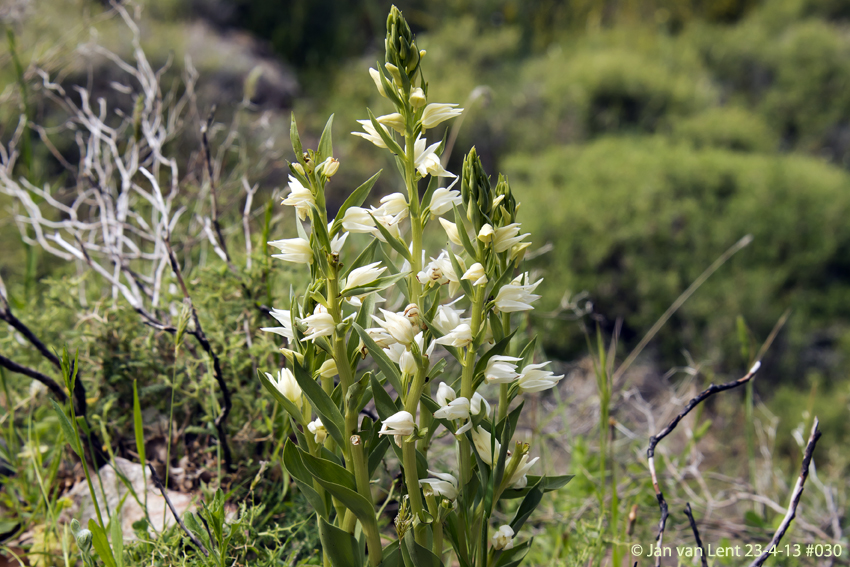 REMARKS: The last blog I started with the sentence that ‘it was not so long ago that Ophrys iricolor was hunted down for the first time on Lesvos; it was in 1978 and P.PEISL and H.R. REINHARD were the hunters’. Now I have to start with: It is already very long ago that Cephalanthera longifolia was spotted for the first time on Lesvos. It was in 1897 by the French explorer P.C. CANDARGY under the name C.ensifolia. Cephalanthera epipactoides had to wait almost 70 years (until 1969) before E. STAMADIADOU discovered the plant on Lesvos. And then, in 1995, G. BLAICH described a C.longifolia variation under the name Cephalanthera longifolia var. chlorotica. 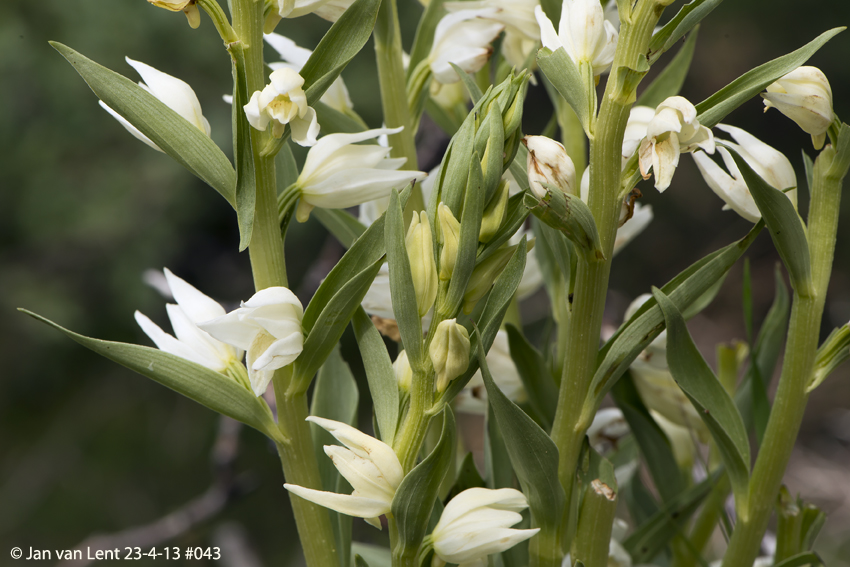 HUNTING: You don’t have to hunt the Long- or Sword-leaved cephalanthera on Lesvos; if for instance you walk the path from Agiasos up to Olymbos in May you almost stumble over them. And also in the Chestnut forest you can’t miss those white flowers with the long leaves in front of all the green. C.epipactoides is another story. I have been hunting almost 5 years for this taxon (like I still do for C.damasionum and C.rubra: still didn’t find them) behind the airfield of Mytilini but it never appeared. And if I look in the ‘Big Biel’* I only see a hamlet and a small fishing harbour with the name Kratigos appearing as the habitat of C.epipactoides. The last time anyone saw it ‘live’ was B. Biel on 16.05.1996: ‘70m W border Kratigos (=?Agrilia Kratigou), steep mountain slope in light Pine forest and Olive tree border: Anacamptis pyramidalis, Cephalanthera epipactoides, Cephalanthera epipactoides var. chlorotica, Ophrys mammosa.’
Until last week; in Eftalou.
And not in a (light) Pine forest but on a cliff in the middle of the phrygana up from the beach with almost the same view of Turkey as I have when I walk to my beach, so at a distant of 2km from my house. The plants were discovered by Leon Boogaart and Anke Sinnema, who came for the first time to Greece, for the first time to Lesvos, on their first day and on their first walk. And there it was: Cephalanthera epipactoides. Yep. And they thought that it was quite normal to find a Helleborine-like cephalanthera in Eftalou, that is, until they met me the next day for a 3 day orchid hunt… 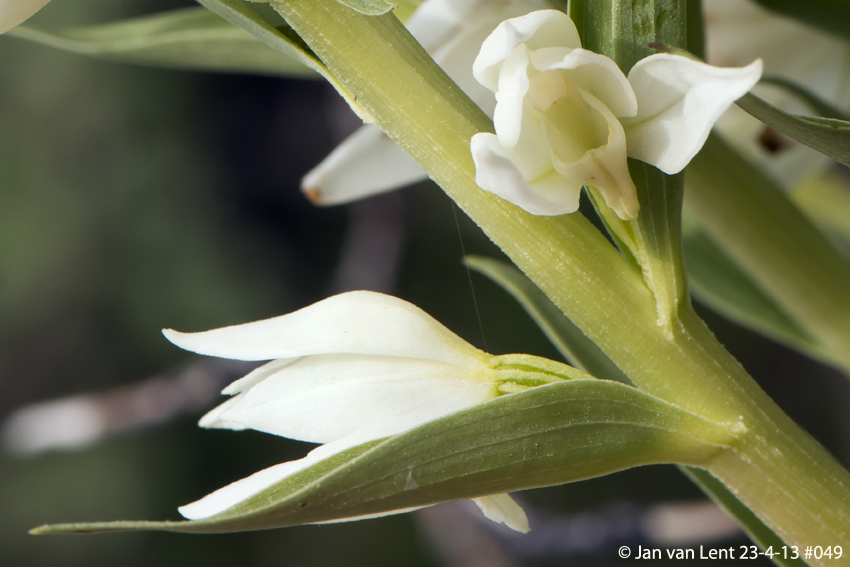 RESEARCH: In SUNDERMANN (Europäische und mediterrane Orchideen, 1980) I didn’t find an orchid with the name Cephalanthera epipactoides, but I found Cephalanthera cucullata ssp. epipactoides, actually the same plant if you look at the photographs and read SUNDERMANN’s descriptions: ’25-100cm, lower leaves bag shaped, the higher ones often flat and sticking out; the stem is often already from the lower fifth filled with up to 40 flowers; flowers white; spur 3-5mm long.
Habitats: ‘Eastern Aegean islands, Turkey (from the Galipoli peninsula eastwards approx. to the Mersin province in the South, in the North to Artvin.)’ He has 3 more subspecies of C. cucullata: ssp. cucullata (only in the Ida mountain on Crete); ssp. kurdica (in the east of Turkey, the north of Syria and Persia) and ssp. floribunda (east Pontus, Kaukasus). And of course he described C.longifolia (no subspecies here), C.rubra and C.damasionum with ssp. caucasica and kotschyana. 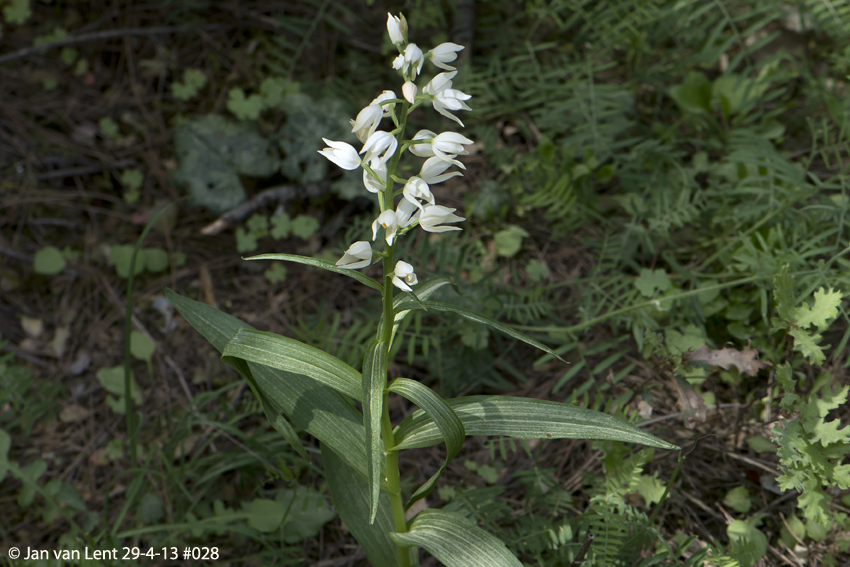 So far, so good. But which of those is this Cephalanthera on the right picture then? 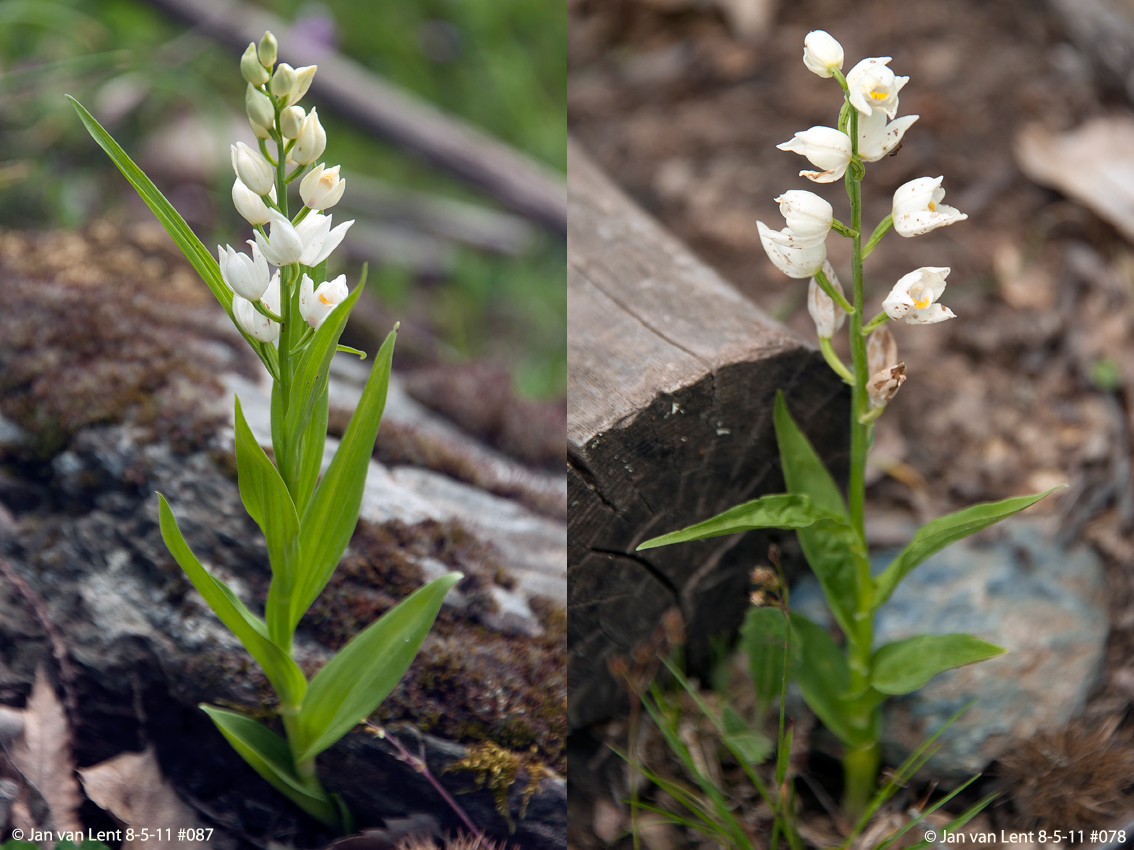 BOTTOM-LINE: And I should have known when I looked closely at the photographs that some plants had already completely vanished and that a lot of leaves had been nibbled. But I thought that the sheep maybe didn’t like Cephalanthera epipactoides and that they wouldn’t come back. But they did in the next days and finished all Cephalanthera completely, down to the ground. Two days later it was Greek Easter. I ate as much sheep as I could that day but I don’t think it helped to preserve those epipactoides next year.

But then I got a message from friends that they found yesterday a bunch of not yet eaten (because they were hidden under a garbage dump) C. epipactoides opposite of the Sanatorio above Agiasos! So here they are, standing in the rain in the immaculate forest … 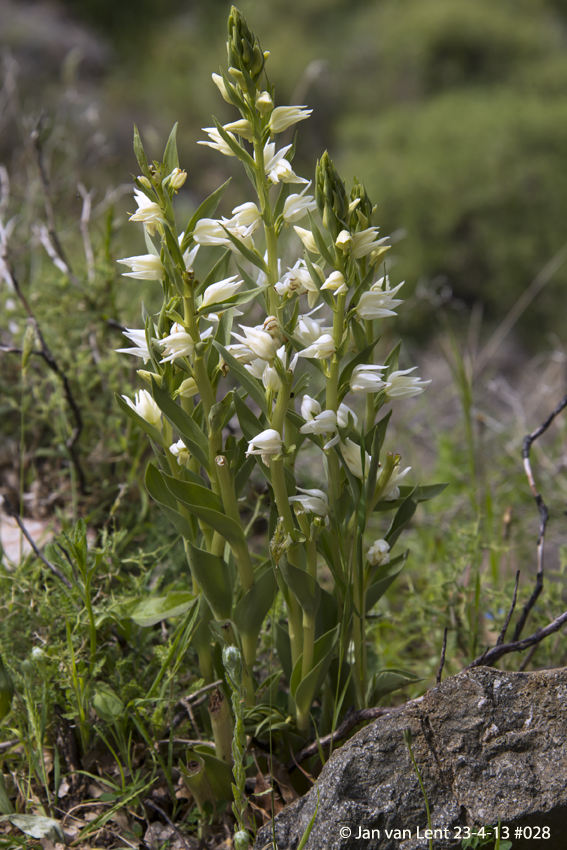 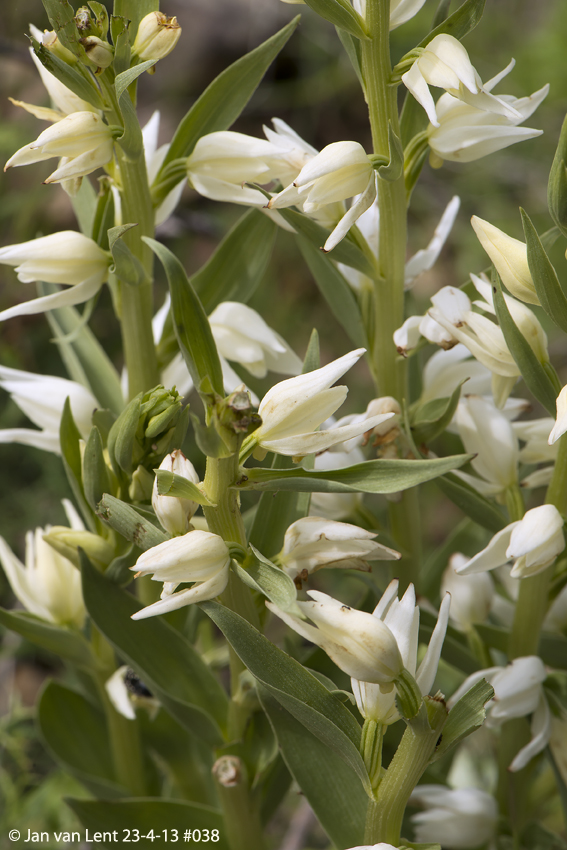 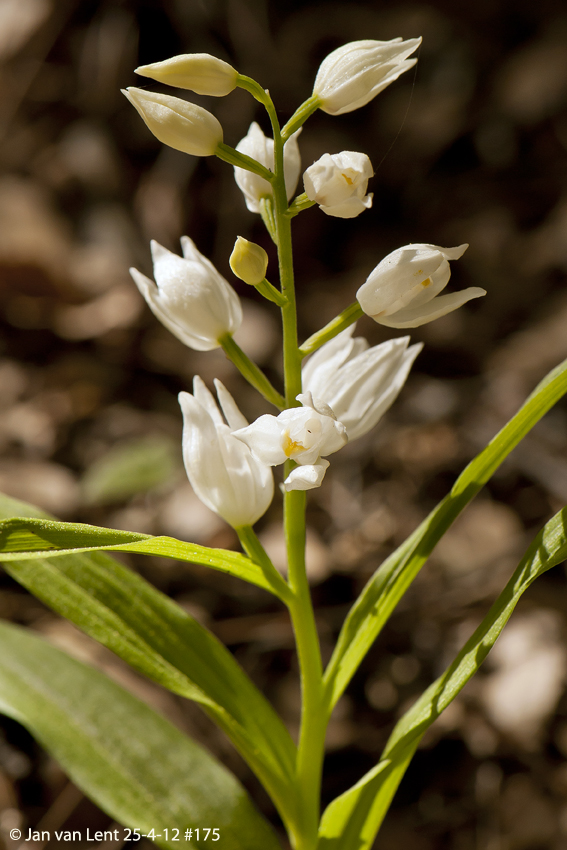 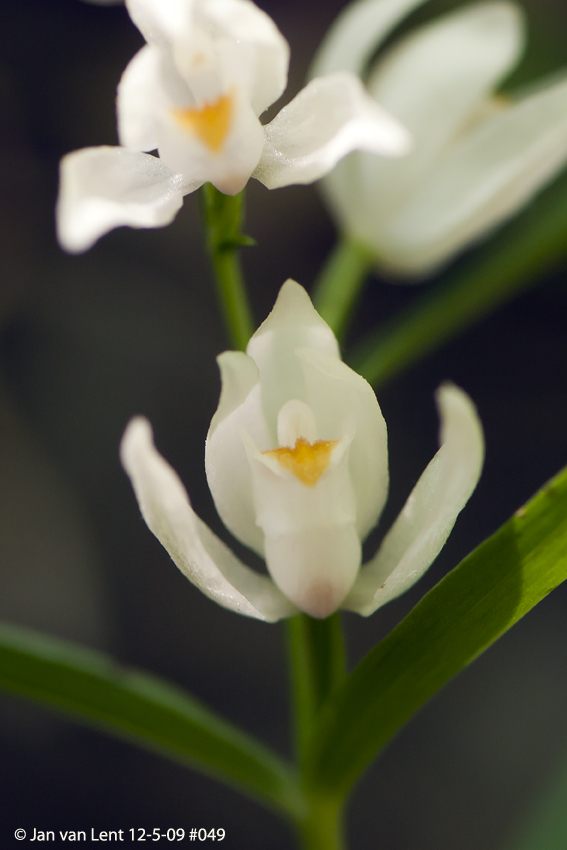 NAMES: Richard, Louis Claude Marie (1754-1821, L.C.Rich.) was a French botanist who collected between 1754 and 1821 plant specimens in South-Central America and the Caribbean. By returning in France he was named professor of botany at the École de médicine in Paris where he founded a botanical garden and began to working with rare and exotic plants, notably orchids. He wrote o.a ‘Demonstrations botaniques’ (1808), ‘Orchideis europaeis’ (1817), ‘Commentatio botanica de Conifereis et Cycladeis’ (1826) and ‘Musaceis commentatio botanica’ (1831). His son Archille Richard (A. Rich.), was also an remarkable and important botanist and orchidologist. (Source: JSTOR PLANT SCIENCE: http://plants.jstor.org/person) 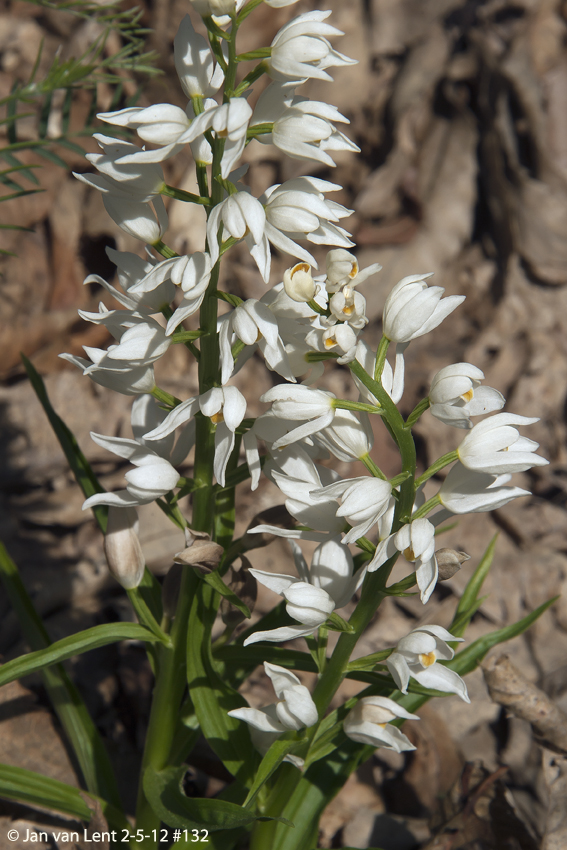 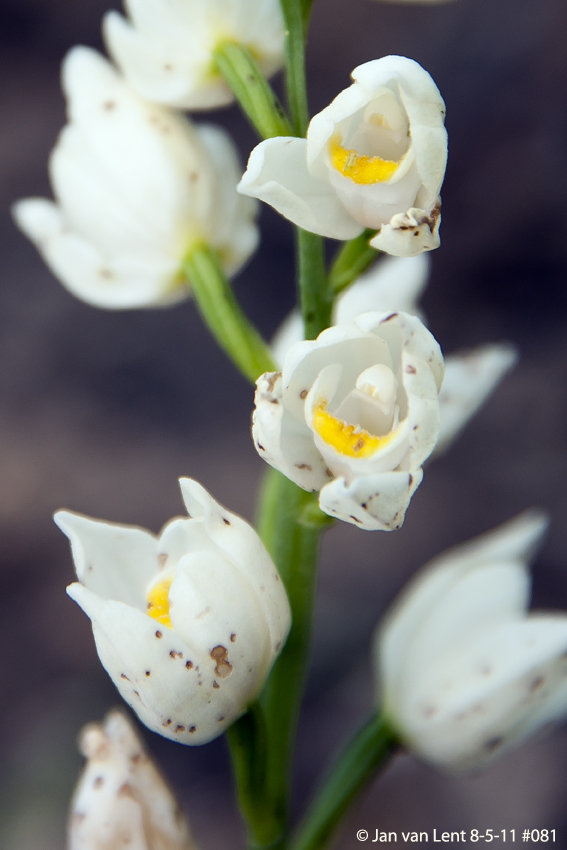 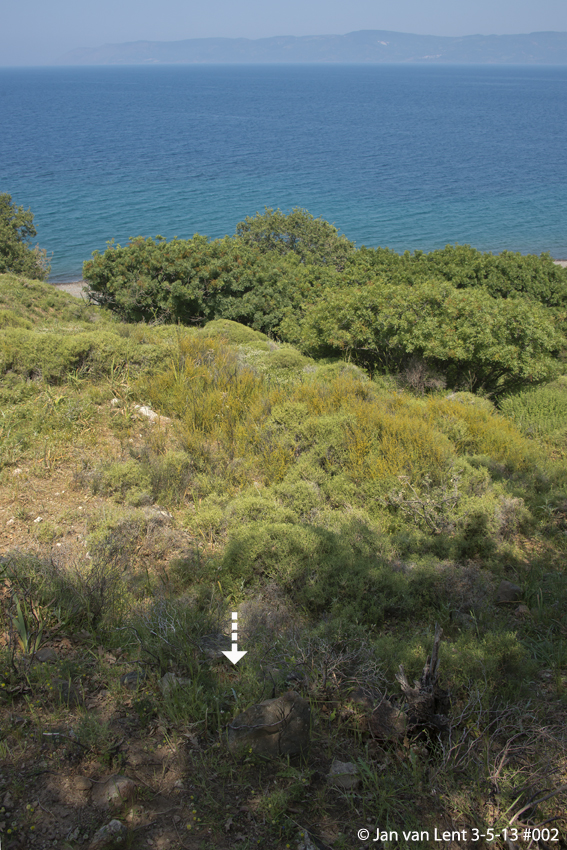 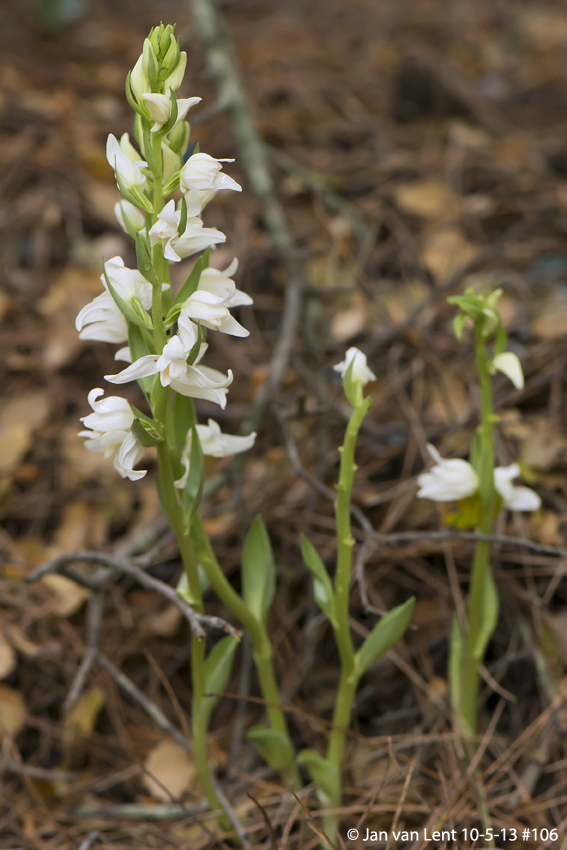