HUNTING: It’s not so long ago that Ophrys iricolor was hunted down for the first time on Lesvos; it was in 1978 and P.Peisl and H.R. Reinhard were the hunters.The thing is that it is almost impossible to miss Ophrys iricolor when you’re out there hunting. It’s big (the lip is between 16 and 25mm), the blue colour on the lip so loud and shiny that even if you want to ignore it, it still attracts you eye. And actually you want to ignore it because IF you want to be sure it’s Ophrys iricolor you have to turn it upside down to see the colour of its bottom (see Blog 3 Ophrys mesaritica: ‘Bottoms Up’), and that is a dangerous thing to do because ‘normally’ Ophrys iricolor has only two flowers on the stem so you don’t want to break one off. Stems with 4 or 5 flowers are seen rarely on Lesvos and then it maybe indicates that its predecessor and sister species Ophrys mesaritica is or was around in the neighbourhood. Or is it ‘politically’ more correct to say that the pollinator of O. mesaritica, Andrena nigroaenea, is maybe still around in April on the same habitat? Or maybe it just IS a very late O. mesaritica with the looks of O. iricolor?In other words: is it an Ophrys in disguise? 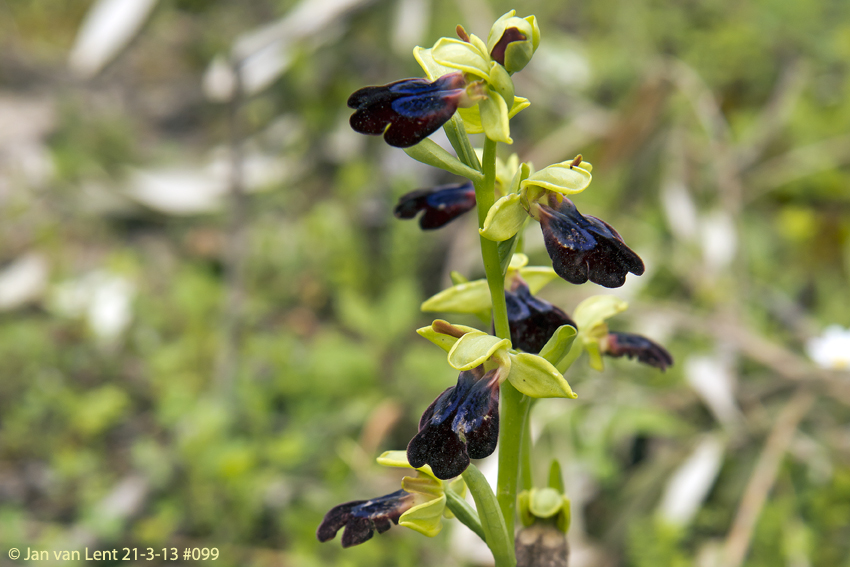 RESEARCH: Questions, questions, questions. So let’s first read in the books the description of the colour of the underside of the iricolor lip: PETROU: crimson; DELFORGE: entirely purple; ANTONOPOULOS: purple; PEDERSEN/FAURHOLDT: wine-red; KRETZSCHMAR: brilliant red ‘rainbow colours’; BAUMANN: brown-red; SUNDERMANN: brownish; KARATZA: red; KREUTZ: intense reddish to reddish brown. Does this mean that everybody sees something different or describes something different? And I have to say that after turning around hundreds of mesaritica and iricolor I also don’t see (it) clearly anymore. So let’s look at the next photographs of an Ophrys iricolor with an almost white bottom. Or is this again a very late O. mesaritica in a very early season? And the no’s 236, 242 & 241 are in my opinion also O. mesaritica but with a blood-red ‘iricolor’ bottom. If this is the case than maybe O. mesaritica is not only a very early taxon but it can flower also until mid-April.

But let’s see what my latest acquisition about Greek orchids (PETROU et al 2011) has to say about the lip (or labellum) of Ophrys iricolor: ‘Lip constricted at its base, nodding to, usually, horizontal, broadly rhomboidal, velvety, tri-lobed, dark reddish-black; lateral lobes rounded, reaching the tip of the median, which is short and bi-lobed. Speculum almost black, with shiny mauve-blue iridescent spots and a shiny W-shaped edge; it is divided in two by a vertical black line, and reaches the middle of the lip. FLOWERING: from February to April.’

Ophrys mesaritica: lip pendant, constricted at its base, rhomboidal, velvety, tri-lobed, dark brown-black, lateral lobes rounded, median considerably longer and slightly bi-lobed. Speculum brown-black, with dull, grey blue iridescent spots and a grey-blue W-shaped edge; it is divided in two by a vertical black line, and exceeds the middle of the lip…..Underside of the lip is whitish-green with red edges. FLOWERING: from December to February (March).

But this season a group of Ophrys iricolor felt the need to buy a new speculum in the Pseudophrys shop, to make the iricolor-group a little bit more interesting. Or is this flushing red colour of the speculum an indication that they are ashamed that I always look at their bottoms? Are they shy? Then I suggest that I (and everybody else) should leave the undersides of iricolor and mesaritica in peace, because maybe it doesn’t say anything about the difference between the two sister species, and you can’t tell them apart (on Lesvos) by looking at their bottoms. 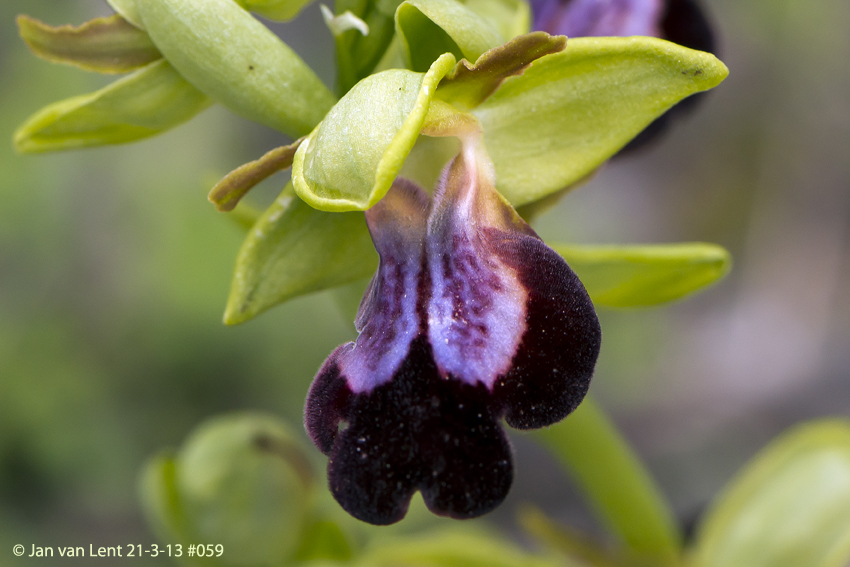 But the question remains why those Ophrys mesaritica/iricolor suddenly have a red speculum this year at the Larisos corner (see Blog 3 Ophrys mesaritica: ‘Bottoms Up’).
Can this be by reason of pollinator shift? In other words: Is here another pollinating Andrena bee involved? This will be another nice subject for a study of scholars like PHILIPP M. SCHLÜTER, PAULO M. RUAS, GUDRUN KOHL, CLAUDETE F. RUAS, TOD F. STUESSY and HANNES F. PAULUS. Because in their study from 2009: Genetic patterns and pollination in Ophrys iricolor and O. mesaritica (Orchidaceae): sympatric* evolution by pollinator shift, they declared: ‘Ophrys iricolor and O. mesaritica are a pair of morphologically similar, closely related sexually deceptive orchids from the eastern Mediterranean. Ophrys iricolor is known to be pollinated by Andrena morio males and the specific pollinator of Ophrys mesaritica is determined as Andrena nigroaenea. Amplified fragment length polymorphism revealed O. iricolor and O. mesaritica to be genetically intermixed on the whole, although populations of O. iricolor and O. mesaritica in geographical proximity are strongly differentiated, suggesting that specific pollinators locally differentiate these taxa. Based on the available biological data and the system of pollinator attraction operative in Ophrys, we hypothesize that O. mesaritica may have arisen from O. iricolor by pollinator shift and that this is more probable than scenarios invoking hybridization as a result of mispollination by rare, non-specific flower visitors or specifically attracted insects.’ 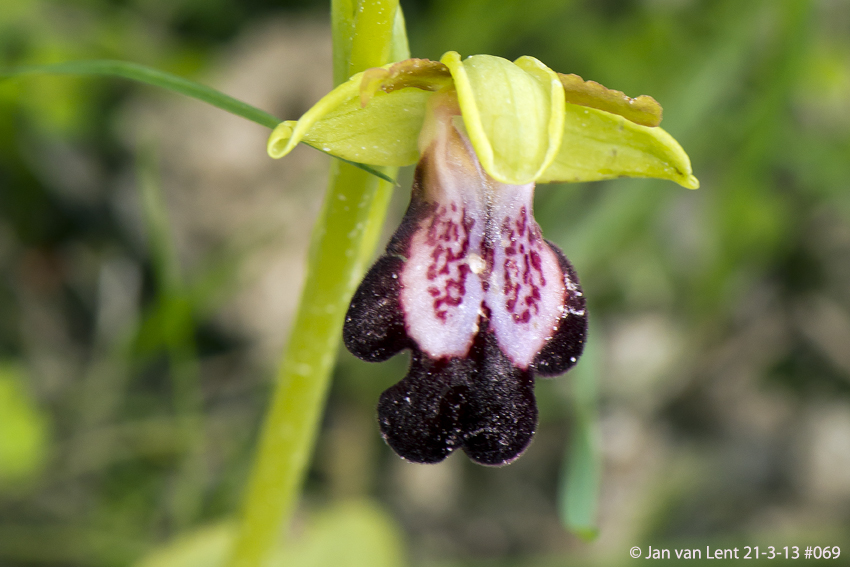 Okay, but then we read also Shuqing Xu, Philipp M. Schlüter, and Florian P. Schiestl  2011: ‘Pollinator-Driven Speciation in Sexually Deceptive Orchids’.
‘In our metastudy, we did not include floral colour, because most descriptions of floral coloration are based on observations by human eyes and not on insect vision models. After the pollinator has landed on a flower, floral morphology such as labellum shape, size, and texture may have a strong influence on pollinator behaviour. In orchids, precisely removing and delivering pollinia is highly dependent on the match of shape and/or size of the pollinators’ body and the floral labellum. Besides floral scent, floral phenology* and floral morphology* may also play a role in floral isolation among closely related species. Some species pairs show no overlap in flowering time in sympatry*, (e.g., O. iricolor and O.mesaritica on Crete). Among such species pairs, floral phenology may act as a strong reproductive barrier. However, as most closely related species pairs (∼90%) of sexually deceptive orchids do overlap in their flowering times to a certain degree, floral phenology alone is usually not the primary reproductive barrier. Differences in floral labellum length between closely related species pairs may contribute to mechanical reproductive isolation as well.’ 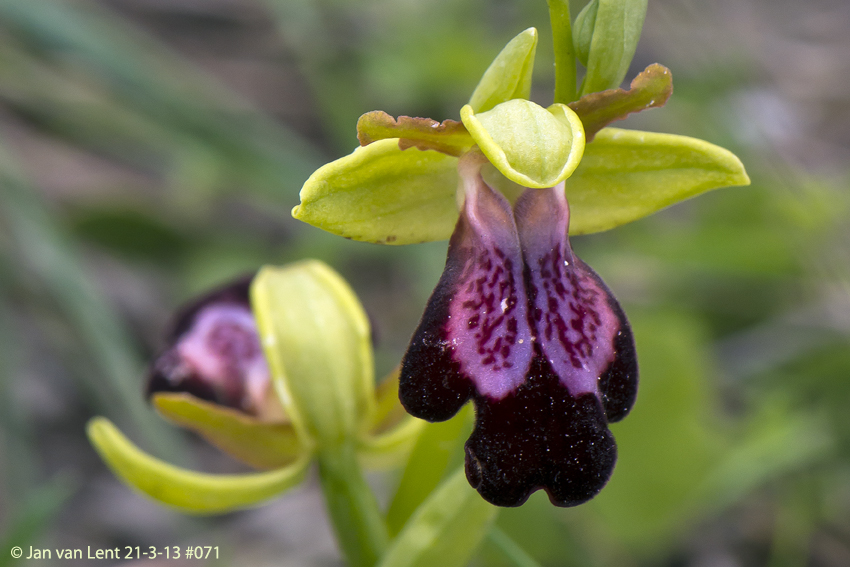 BOTTOM-LINE: I think that the pollinator bees of orchids and especially the Andrena bees of the Pseudophrys-group can be sexually very, very deceptive! In other words: they are as perfidious as human beings and they commit adultery all day and all of the night! Maybe that’s why those Ophrys are flushing…

*Phenology is the study of periodic plant and animal life cycle events and how these are influenced by seasonal and interannual variations in climate, as well as habitat factors (such as elevation). In the scientific literature on ecology, the term is used more generally to indicate the time frame for any seasonal biological phenomena, including the dates of last appearance (e.g., the seasonal phenology of a species may be from April through September). (Source: Wikipedia.)

*Sympatry: In biology, two species or populations are considered sympatric when they exist in the same geographic area and thus regularly encounter one another. (Source: Wikipedia.) 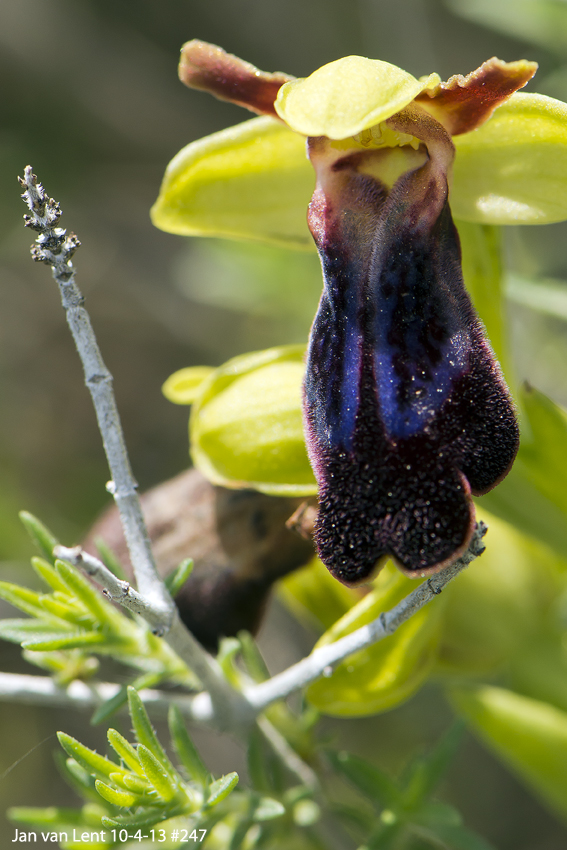 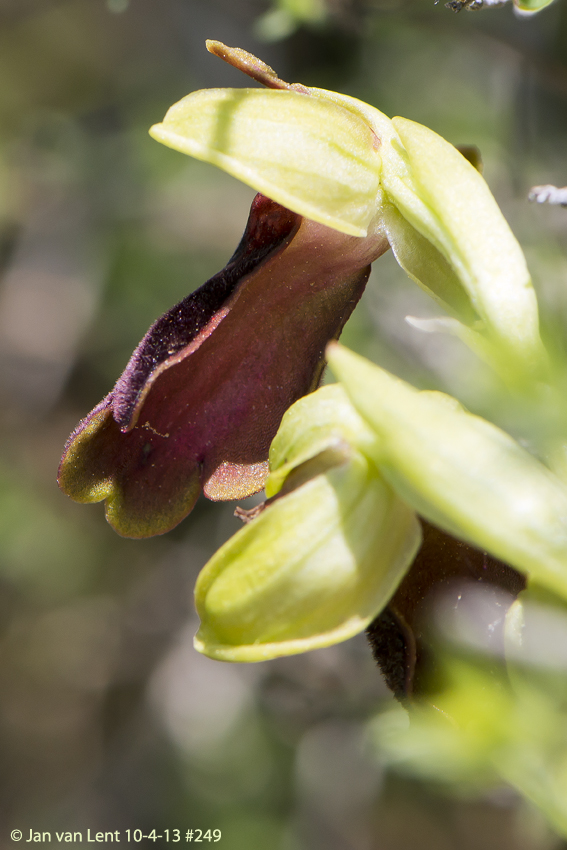 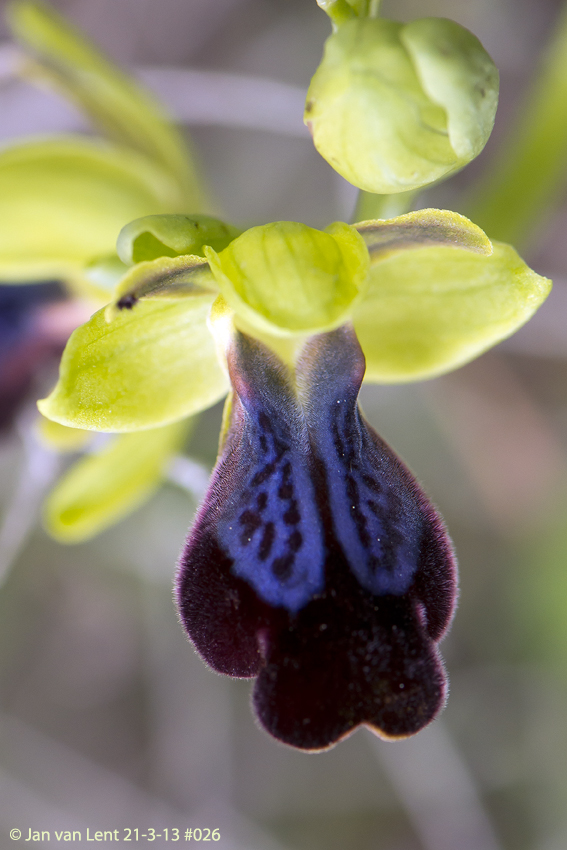 ETYMOLOGY: Iri-color: from the shiny (iridescent) blue colour of the speculum. 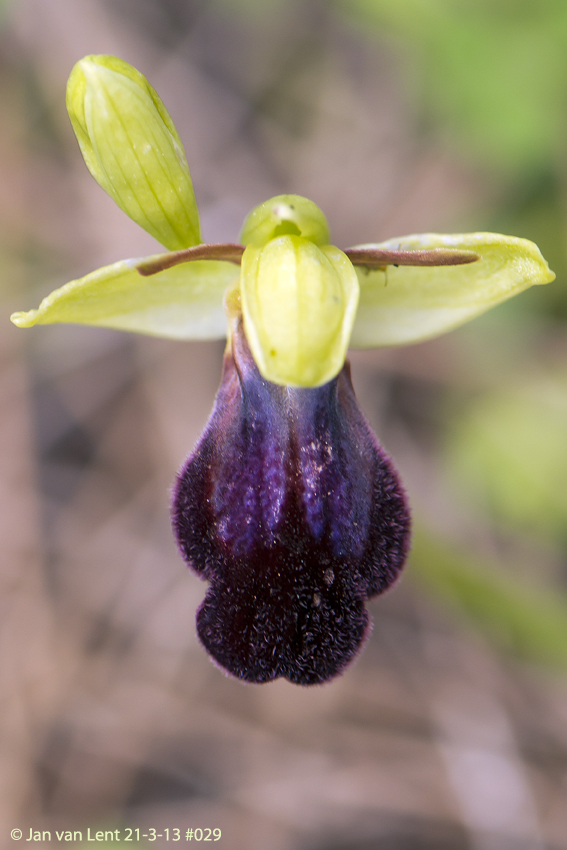 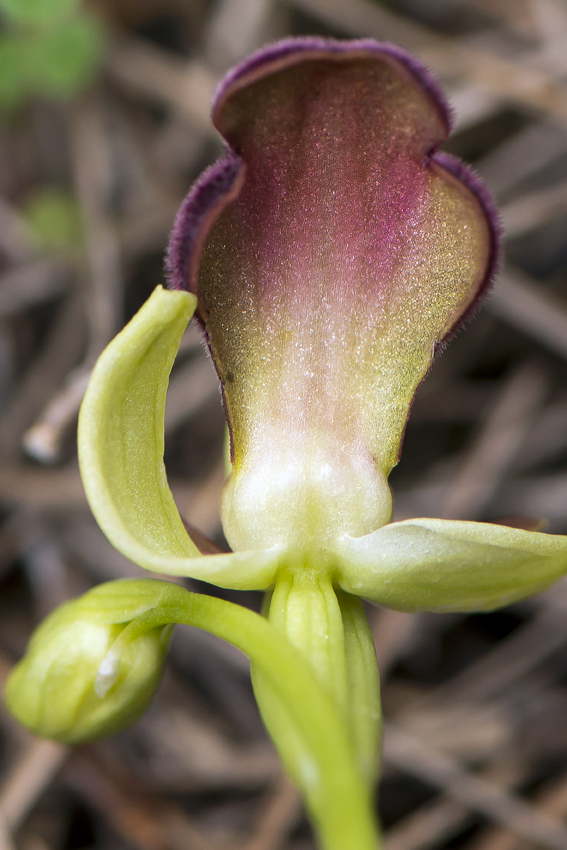 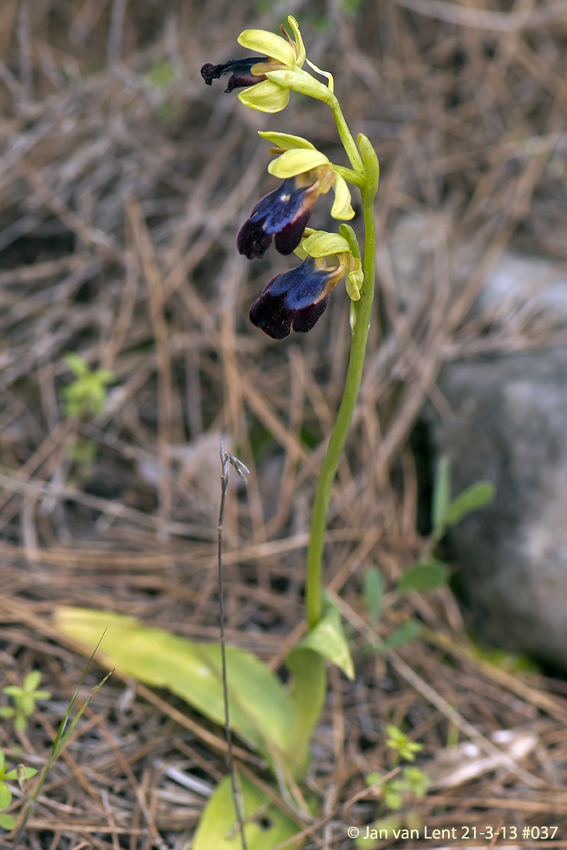 NAMES: René Louiche Desfontaines (1750-1833), French botanist, professor of botany and director of the Jardin des Plantes in Paris. Desfontaines spent two years in Algeria and Tunisia, and explored the region from the seacoast to the Atlas Mountains. He returned with a huge collection of plants which became part of the herbarium of the Natural History Museum and was described in his great work, Flora Atlantica, 2 vols. (1798-1799). In it are descriptions of 1,520 species and of more than three hundred genera previously unknown to botanical science, like Ophrys iricolor. 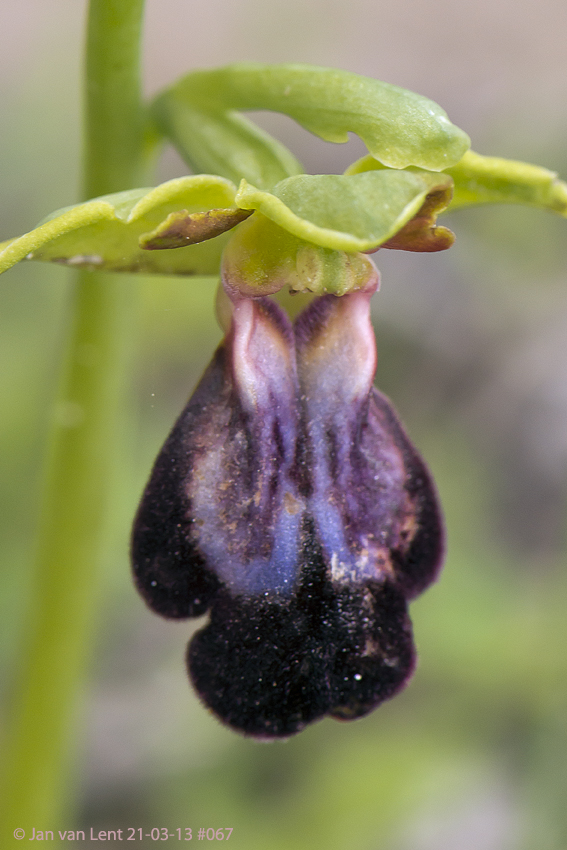 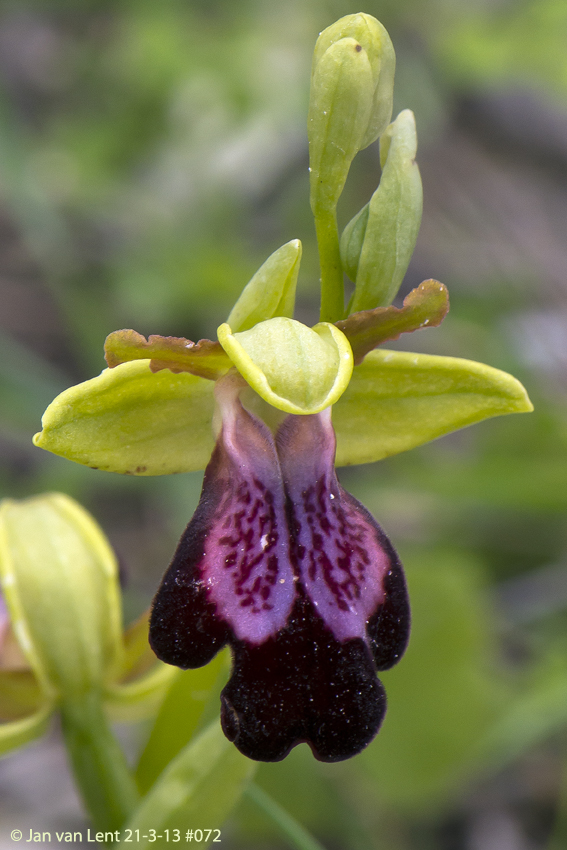 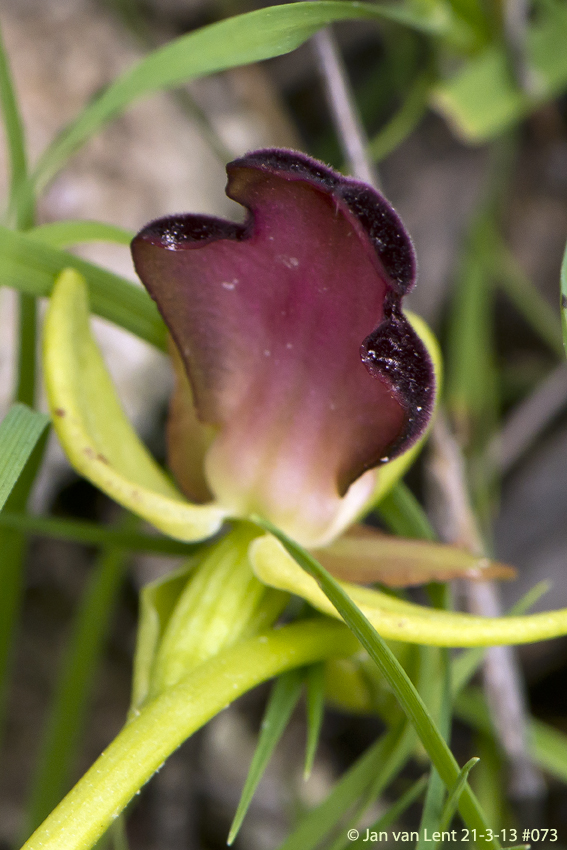 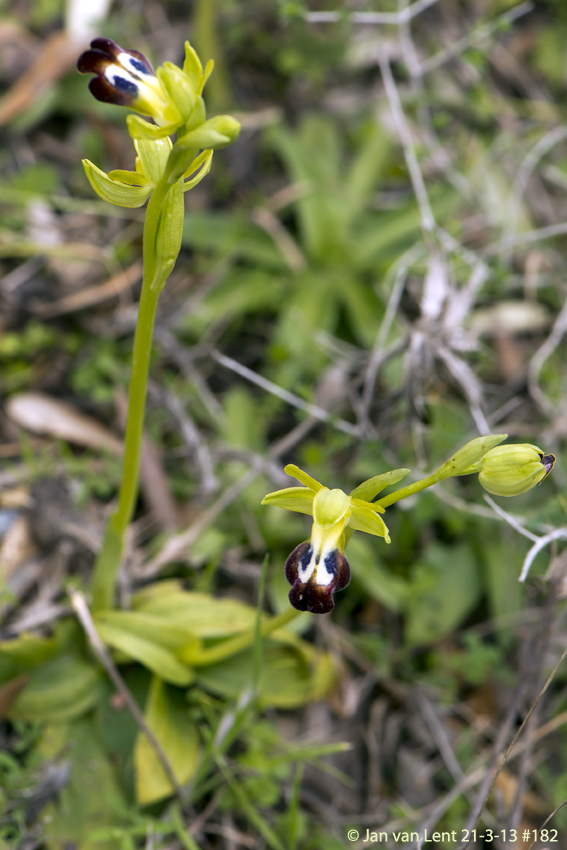 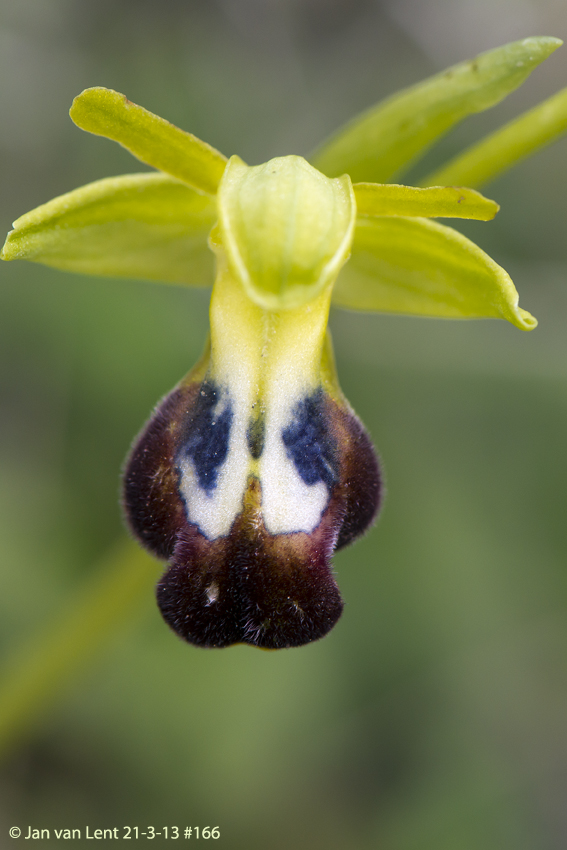 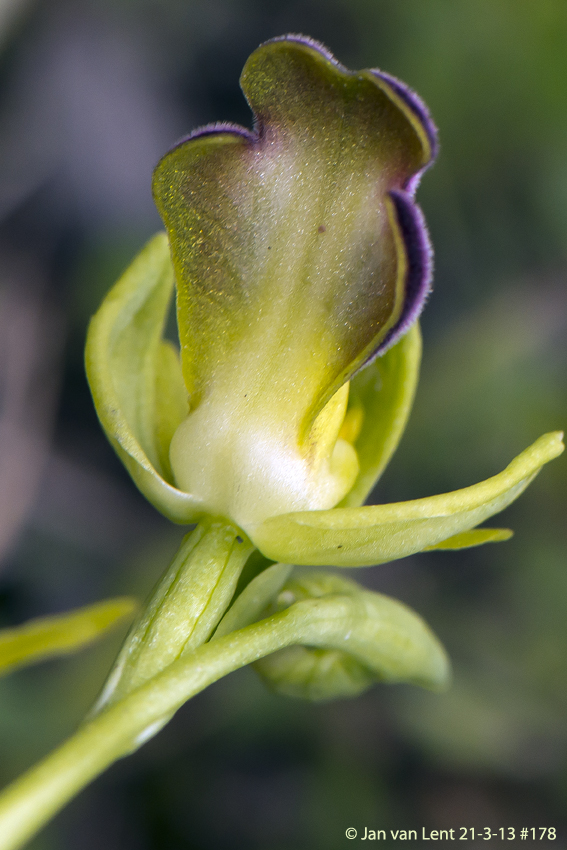