HUNTING: Well, what I have to do to ‘shoot’ O. cinereophila is not actually hunting!
I just have to drive towards Mytilini and take the first exit to Alifantá because I can only find Ophrys cinereophila there, above Alifantá and not in large stands but only a few. BIEL (1998) described this plant with the very tiny flowers from a few more habitats on Lesvos like Moria, Skopelos, Pigí and above Mytilini. But the city of Mytilini made a new road, connecting the ‘highway’ to Mytilini and the east coast, actually to the electricity power plant. But on this new road there is nowadays a gypsy camp on the habitat described by BIEL (MD.52.98) so I couldn’t check that one out. KARATZÁ (2008) described this Small Flowered Brown Ophrys from a lot of places in the east (in the triangle between N. Kidoníes, Thermí and Pigí), in the deep south (between Plomári – Mágeiras and Tárti) and west from Mytilíni (Mória, Alifantá, Loutrá). MANNING found Ophrys cinereophila at Andissa, Pigi, Loutra, Anemomilos and the Koumari hills. S. & K. HERTEL (2005) found just 4 plants and 1 hybrid on Lesvos near Mytilini (Alifantá?), but 20 plants on Chios and not one on Samos or Ikaria.

RESEARCH: Let’s see how the names and authors of this ‘friend of the ash coloured’ changed through the last 30 years.
1980: SUNDERMANN (Europe). No cinereophila in sight in 1980: only O. fusca with iricolor, omegaifera, pallida and atlantica.
1998: Ophrys cinereophila is described in Jour. Eur. Orch by PAULUS & GACK.
Also BIEL (Lesvos 1998) already differentiated between Ophrys cinereophila-fusca, flavipes-fusca, blithopertha-fusca and O.attaviria in his essay ‘Die Orchideenflora der Insel Lesvos’, which he published (by chance?) in the same issue of Jour. Eur. Orch. as the article of PAULUS & GACK (1998) in which they described Ophrys cinereophila.
KREUTZ (Turkey 1998 – from the same year) instantly made a remark about Ophrys cinereophila H.F. Paulus & Gack 1998 about getting confused between Ophrys funerea and Ophrys cinereophila but: ‘According to Paulus & Gack (1995) O. funerea is a clearly defined species, which occurs only on Corsica and Sardinia’.
2001: The ANDERSONS (Lesvos), famous (or notorious) for their walking books, didn’t mentioned Ophrys cinereophila in their booklet ‘Orchids Of Lesvos’, they only mentioned the ‘sombre bee orchid’ Ophrys fusca, flowering from the first week of February until the second week of April. But: ‘On Lesvos, some of the challenges within the genus Ophrys include distinguishing O. attaviria, O. sitiaca and O. fuscain the Ophrys fusca group. Yeah, can we go back to those times when the names of orchids were simple, well defined and understandable…
2002: KREUTZ (Rhodos, Karpathos, 2002). Large stands of Ophrys cinereophila.
2004: KREUTZ (Cyprus 2004). Large stands and many habitats of Ophrys cinereophila (synonym: O. fusca ssp. cinereophila (H.F. Paulus & Gack 1998) N. Faurholdt 2002. Faurholdt? What does he has to do with Ophrys cinereophila? Ah, he was the great inventor in 2002 of ‘fusca ssp.’ between Ophrys and cinereophila, eight letters which really make the difference…
KRETZSCHMAR ET AL. (Crete & Dodecanese, 2004): Ophrys cinereophila is common on all the islands.
2005: DELFORGE* (Europe North Africa & the Middle East). Ophrys cinereophila H.F. Paulus & Gack. And he made a note: ‘The more western reports of O. cinereophila (Peloponnese, Gulf of Corinth, Ionian Islands) often refer to O. perpusilla or a related taxon. Plants very similar to O. cinereophila but identified with difficulty as O. fabrella flower also in the Balearics.’
2006: BAUMANN ET AL. (Europe). I even don’t have to look it up; it certainly is Ophrys fusca ssp. cinereophila Paulus & Gack. And yes it is. Synonyms: O.cinereophila and O.thriptiensis. And they specified the area where it grows: Ionian Islands, the South of Greece, the South-Aegean, Crete, southwest Turkey and Cyprus. And actually those are the places where they grow in ‘large stands’.

2007: PEDERSEN H./FAURHOLDT N. (Europe). Also here I don’t have to look it up because KREUTZ 2004 had already this synonym for Ophrys cinereophila: Ophrys fusca ssp. cinereophila (H.F. Paulus & Gack 1998) N. Faurholdt 2002. ‘The distribution is eastern Mediterranean, but insufficiently known, as this plant was not recognised systematically until 1998. Reliable records exist from parts of mainland Greece, a number of Aegean islands, Cyprus, Syria and areas in western Anatolia. Personally, we have seen subsp. cinereophila in Chios, Crete, Rhodes, Samos and Cyprus.’
I know that they also visited the island so I can make only one conclusion: they couldn’t find Ophrys cinereophila on Lesvos…
2008: DELFORGE (Samos 2008) writes that O. cinereophila is a very local taxon on Samos and that it is the first mention for Samos of this Ophrys.
2009: ANTONOPOULOS (Greece). Ophrys cinereophila H.F. Paulus & Gack, 1998. In their schematic drawing of Greece everything is green in the Aegean, except Lesvos (Limnos & Tasos). ‘This species is found in the Cyclades, Dodecanese, east Aegean islands and on Crete; it also exists on Evvia. In central mainland Greece and the Peloponnese its distribution is unclear since it intermixes with the similar appearing Ophrys perpusilla.’

2010: DEVILLERS ET AL. (Lesvos): ‘In the early season of 2010, we (FB, LD) found only one plant in bloom, again in the same area, on 8 April………..Both in 1990 and in 2010, we found around the Olympos massif plants that had flowers of similar size to those of 0. cinereophila but were not entirely characteristic of the species. They were in mixed stations with other plants of the 0. fusca complex in the western periphery of the massif, above Achladeri (FB, LD, 11 April 2010), and on the northern slopes of the massif below Agiasos (PD, JDT, 13 April 1990). We have too few documents to allocate them.’
2011: PETROU ET AL.* (Greece). I’m always a little bit afraid to look in the register of their book (which I really like) because you never know which orchid became in the meantime another genus (see Blog 19 & 20). I’m lucky this time, Ophrys cinereophila is in their opinion Ophrys fusca subsp. cinereophila (Paulus & Gack) Faurholdt. DISTRIBUTION: ‘A taxon of the eastern Mediterranean, distributed from Greece to Syria(well, I hope so with this civil war going on there); it occurs in central Greece, The Cyclades, the Dodecanese and Crete.’
2012: TAYLOR (Chios). Ophrys cinereophila Paulus & Gack is widespread and frequent throughout Chios.

Not Fade Away, Rolling Stones 1964.
http://www.youtube.com/watch?v=6dZSOXZcQfQ

Or the original song by Buddy Holly & The Crickets 1958.
http://www.youtube.com/watch?v=HRlOI3N7Hao

*DELFORGE and PETROU ET AL. noted in their list of synonyms: O. ‘cinereophila-fusca’ Paulus & Gack nom. prov.! Nom. prov. stands for ‘nomen provisorium’: a temporary name. PETROU: ‘A name that has not been effectively published, but is used provisionally by many people when referring to a taxon, until the correct name is defined’. Well, the correct ‘official’ name is published in IPNI[1] and KEW’s WCSP[2]:

[3] Basionym: the first name published in association with a type, forming the foundation of a new nomenclatural combination.

ETYMOLOGY: Cinereo-phila: -phila is derived from the Greek word ‘o philos (m) and ‘I fíli’ (f) friend or maybe ‘i filía’, friendship; cinereo-: the ashy coloured (the specific epithet of pollinator Andrena cinereophila).

Auct. non (auctorum non): used for misapplied names that are given habitually to a taxon, maybe as a result of a misidentification that no one noticed.

NAMES: H.F. Paulus = Dr. Hannes F. Paulus (1943- ), is an Austrian biologist and professor at the University of Vienna, department of Evolutionary Biology. He studies the pollination biology of European and Mediterranean orchids and published many articles about the pollination and signal evolution in Ophrys. 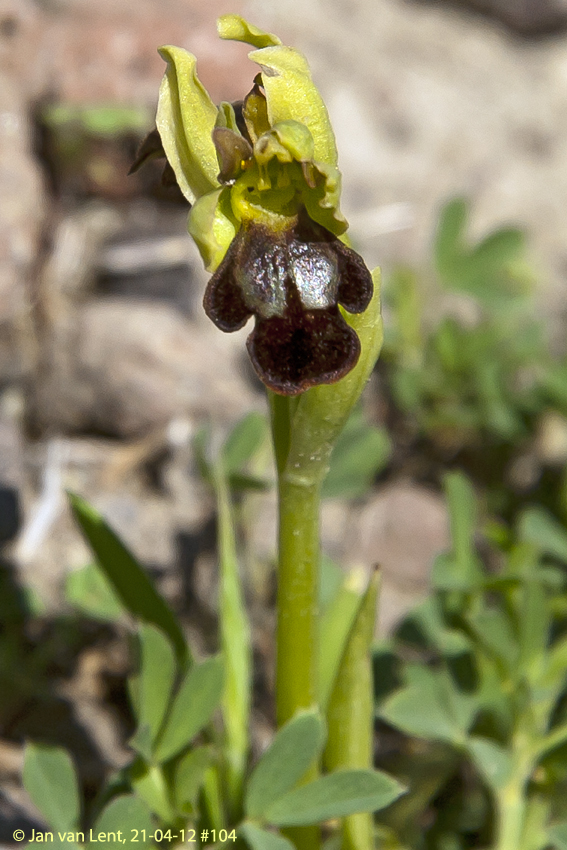