HUNTING: It can be Greek to (synonym for: seem strange to) go out in the Orchid Paradise when the chance to get wet is almost 100%. But after days of heavy rains you sometimes have to take your chance if you want to go out and photograph Orchids when it is dry, even though it will be just for a few hours. So on the 12th I jumped into my car and drove quickly to Lambou Mili – in the centre of Lesvos – to continue photographing a series of Pseudophrys (among others the new Ophrys sancti-isidorii – see blog 18) next to a parking spot in the pine forest just before the old village itself. After shooting them I decided to walk (with complete camera equipment) to the entrance of the track leading to the old Roman Aqueduct, because the sun was shining, the birds were singing and everywhere you looked I saw masses of beautifully coloured Anemones. So maybe there are also some early orchids to shoot, I thought bearing in mind that in this habitat I found in recent years Ophrys umbilicata, leucadica, sitiaca, pelinaea, leochroma, minutula, Orchis morio picta, lactea and papilionacea.

HABITAT: Coming into the fields leading to the aqueduct and walking down hill I saw tens of Orchis lactea, the Milky Orchid, flowering between the olive trees, no sign of others – or let alone Pseudophrys yet. So bearing in mind the phrase ‘first come first served’ I decided to work on the Milky Orchid. When I almost reached the aqueduct an enormous bang shuddered through the valley, I looked up (normally I look down, kneel down or I lie down) and saw that the sky was completely black. (I should have seen that before because the existing light was quickly fading away and I had to open my lens more and more and revalue the iso-rating). So I grabbed my equipment (I had already once had a not so pleasant thunder & lighting experience up from Agiasos – see Blog 13 ‘Just A Forest’) so I started running up hill. Well, too late; the first very big raindrops were already hitting me & my camera. In short: before I had reached my car I was soaking wet and my camera still dry. But I had my shots of those very beautiful, just opening and fresh Orchis lactea. 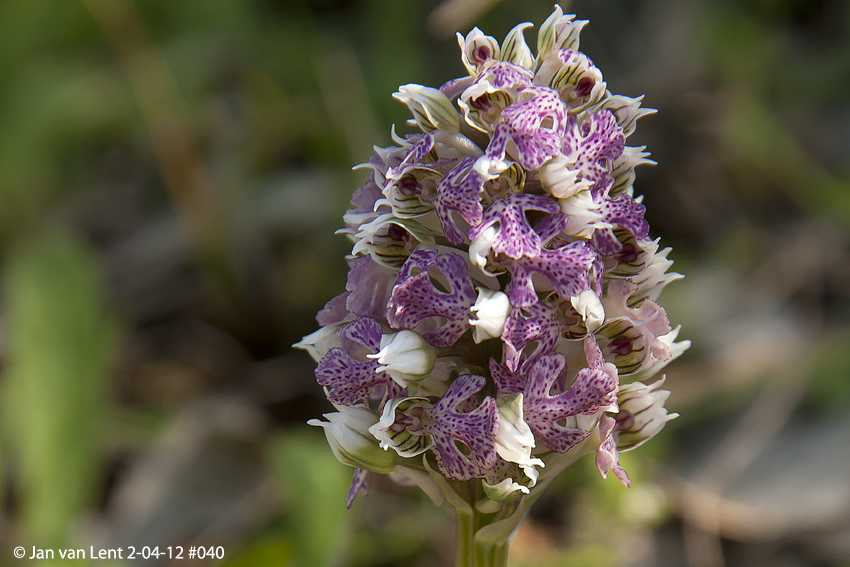 RESEARCH: Until recently I was quickly done with my research on the Milky Orchid, because ‘everybody’ agreed on the morphological appearance, the name, date and author of Orchis lactea Poiret 1798. But ‘things’ are maybe changing because in 1997 R. M. BATEMAN, PRIDGEON & M. W. CHASE reshuffled a lot of species in the genera Aceras, Anacamptis, Neotinea, and Orchis (see also blog 19 ‘Heroes’, Orchis papilionacea). But apparently not everybody was so enthusiastic about this genetic-approach, because until 2007 the authors below did not change the species generic names. So let’s have a quick look at the history of the Orchis lactea name since 1980: 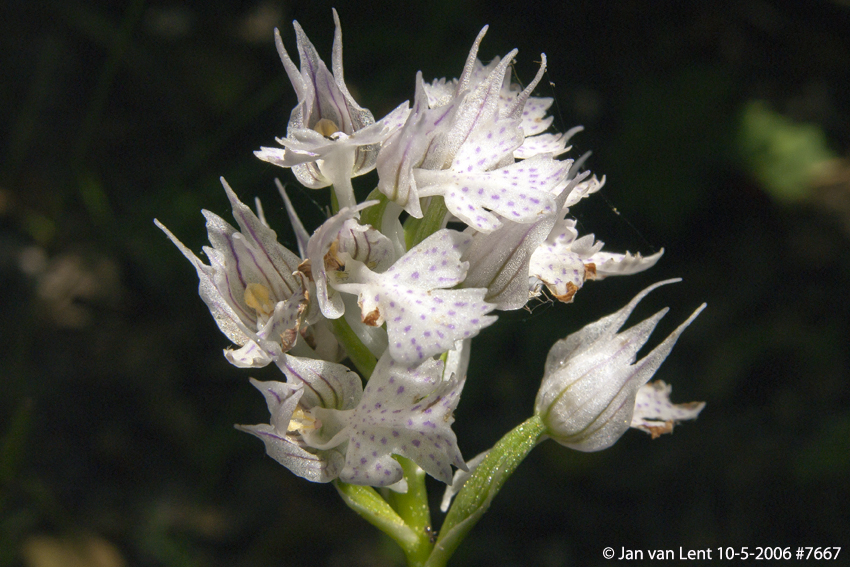 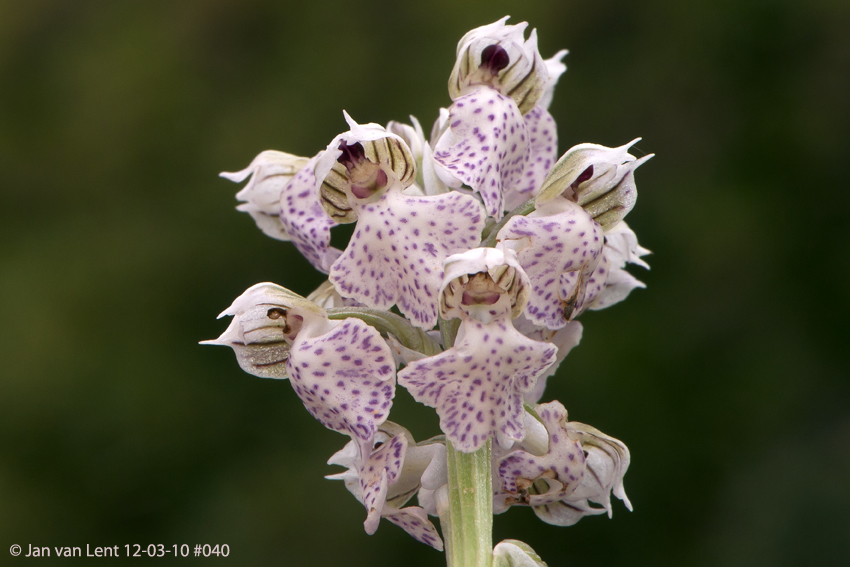 So we have only SUNDERMANN who wrote O. tridentata ssp. lactea; 7 orchidologists who go for Orchis lactea and two who adapted BPC*’s 1997 lactea  switch from  Orchis to Neotinea.

BOTTOM-LINE: Two years ago I was (on the same date) hunting orchids on the road to Palios, as I approached the Kafkares habitat where I found the year before a lot of Orchis morio and Orchis lactea. Now this habitat was full of cows because some farmers have the habit to put all their livestock – goats, sheep, cows, calves and bulls – into ‘waste’ land, thus: nature. I’m not so afraid of the bulls but if cows have small calves they can mercilessly raise their horns at you. And they eat and trample of course MY orchids into the ground. But I start really looking under and IN the bushes and oh yes, there they were: Orchis lactea. So cows, sheep, milk and Milky Orchids can merge together. And maybe, one day, there will be a new orchid on Lesvos: Neotinea fetanea.

‘No Milk Today’ by the ‘famous’ Greek singer Vassilikos (2011).
http://www.youtube.com/watch?v=CJ4HKWl1wRA

And for people who wish to see the original: ‘No Milk Today’ – Herman’s Hermits 1966.
https://www.youtube.com/watch?v=pdw4Ed2sR9c 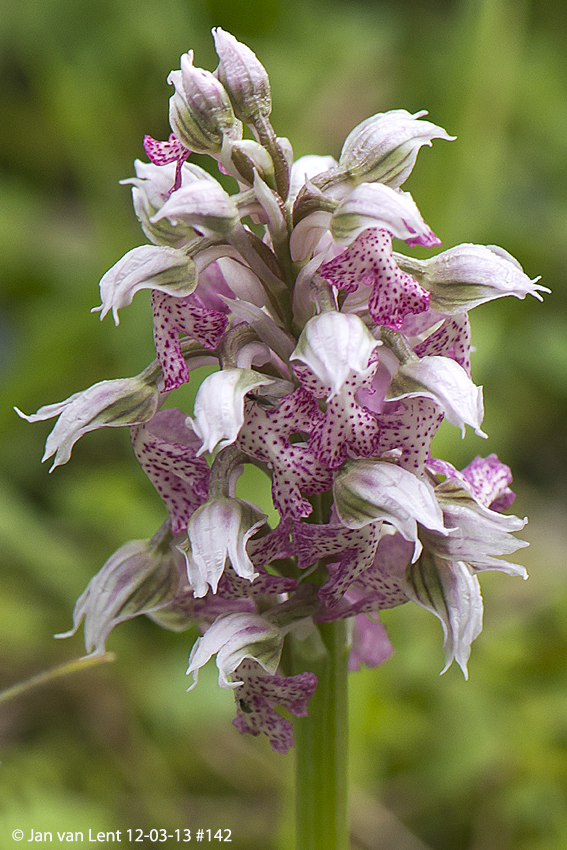 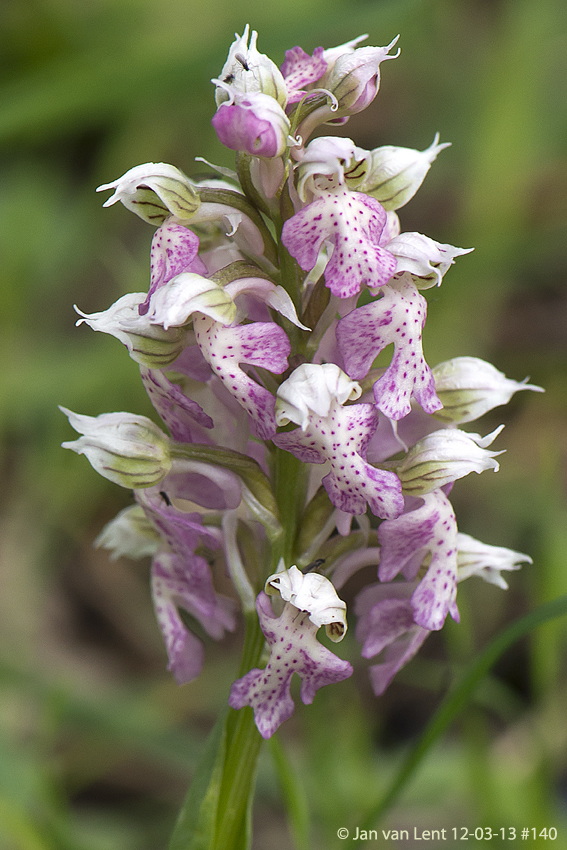 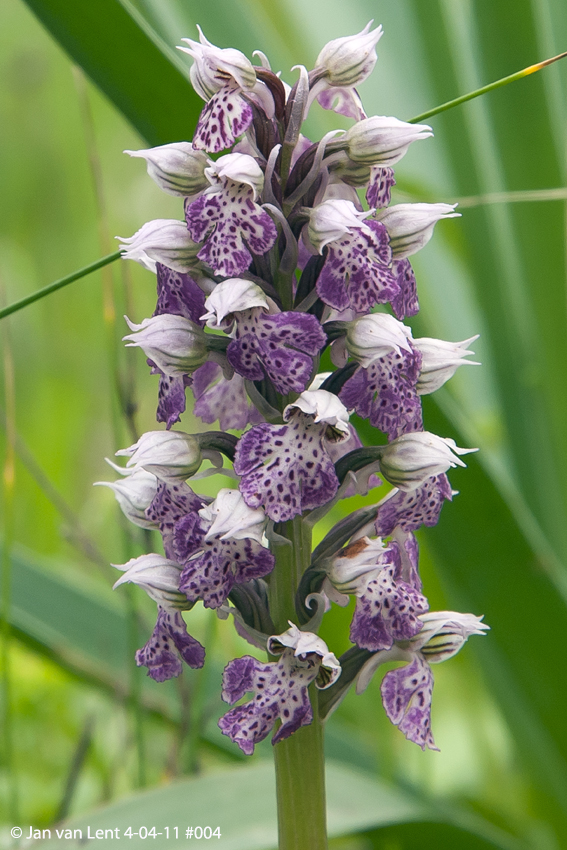 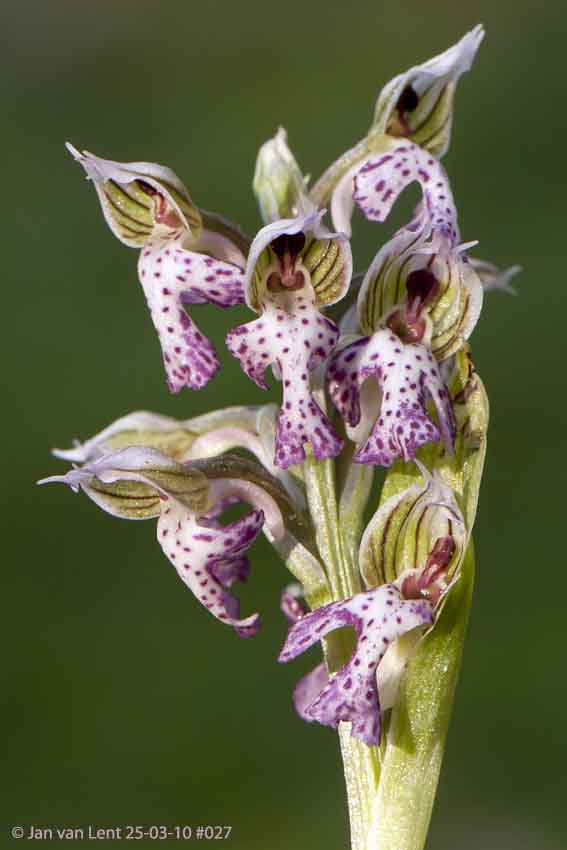 NAMES:  Poir. = Jean Louis Marie Poiret (1755-1834) was a French clergyman, botanist and explorer. From 1785 to 1786 he was sent by Louis XVI to Algeria to study the flora. After returning he published a collection of his letters about this journey with the title: ‘Voyage en Barbarie (1789)’. After the French Revolution he left the Church, married and became a professor of natural history at the Écoles Centrale of Aisne. He was co-author of M. Lamarck’s ‘Encyclopedie méthodique Botanique’. Poiret was a very productive writer, he produced a series of 7 books about economical plants and in 1819 he published ‘Lecons de Flore’ as counterpart of Chaumeton’s ‘Flore Medicale’. The subtitle was: ‘an complete course in botany, followed by a botanic iconography’ illustrated with colour illustrations by the famous J.F.Turpin.
(Source: Wikipedia) 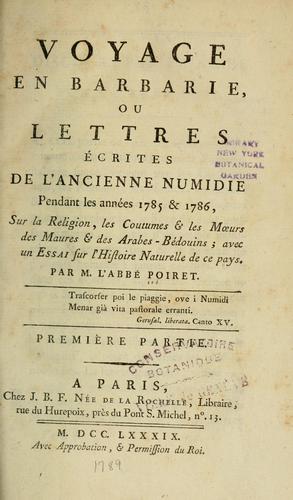 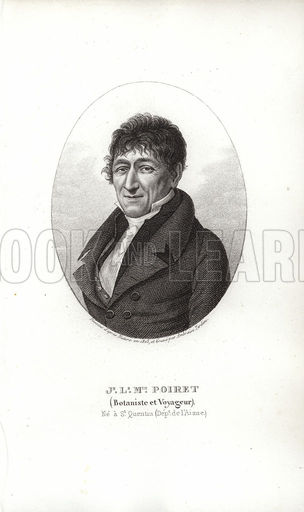 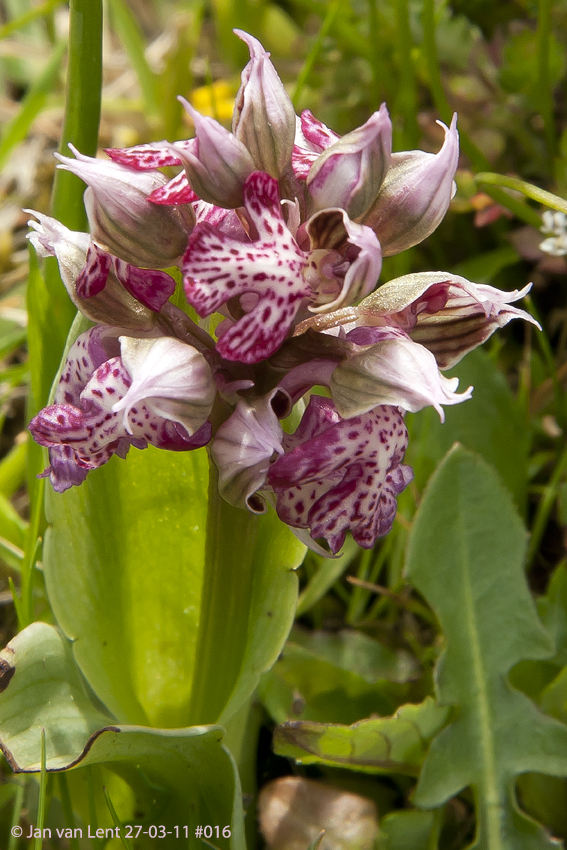 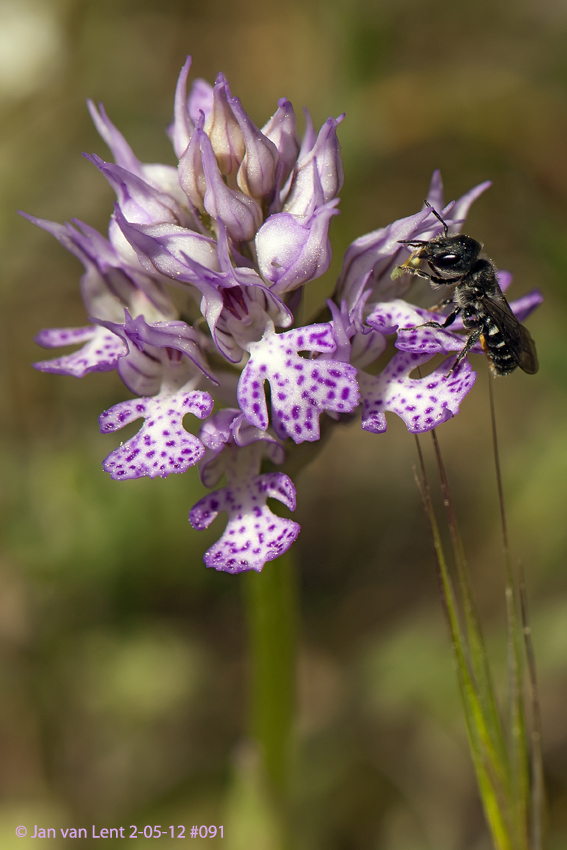 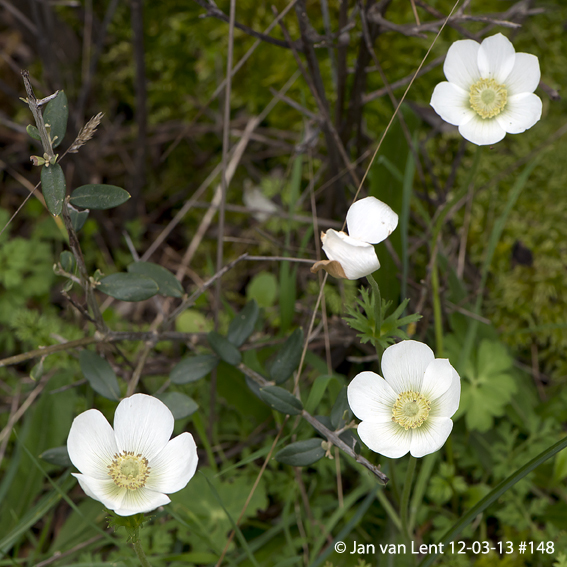 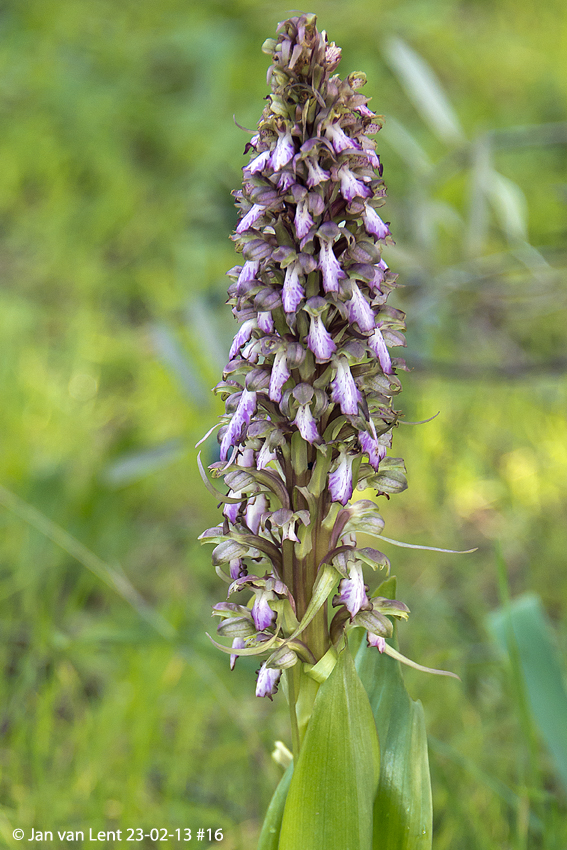 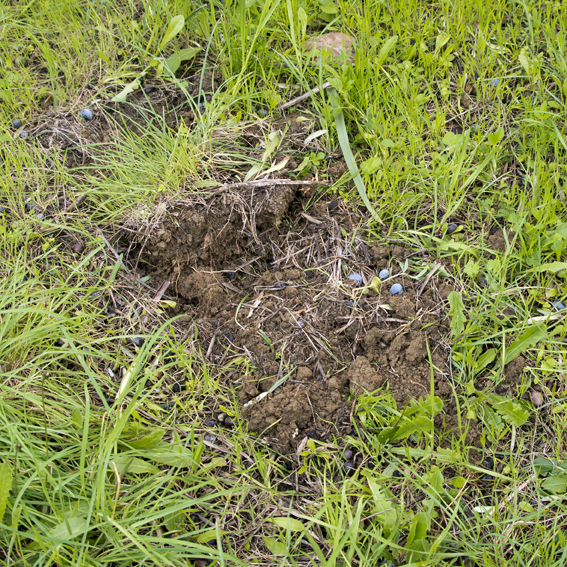