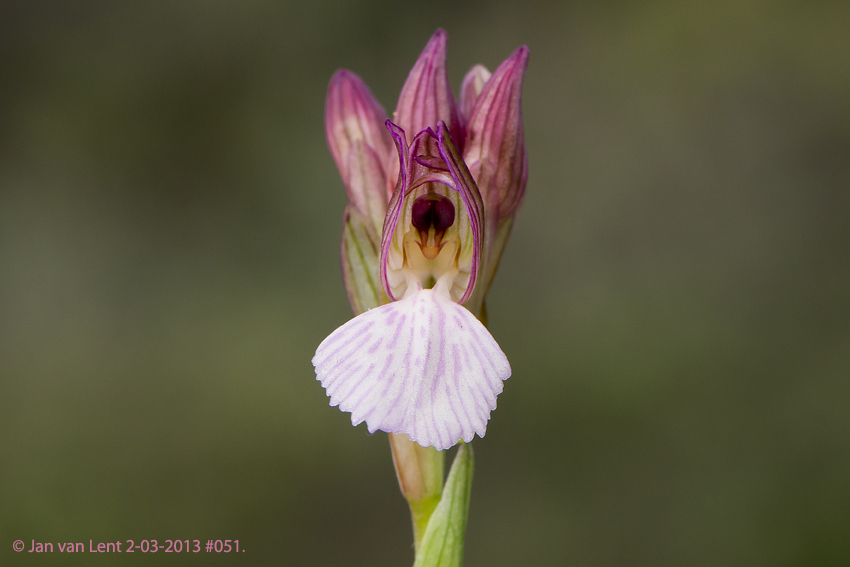 HUNTING: You do not have to hunt for papilionacea because you can find them on the whole island. Moreover, it is difficult to miss them; between March and May you almost stumble over them. The earliest Orchis papilionacea species I discovered was in the middle of February in the neighbourhood of Palios, the most northeastern part of Lesvos (see Blog 3. ‘The Romans are still here!’). Now I went there on the 2nd of March, but in 2011 I was already there on the 21st of February and on that date O. papilionacea, O. morio s.l. and Dactylorhiza romana were doing the Miss Orchid 2011 beauty contest, finally won by miss Dactylorhiza romana. This time it cost me a lot of effort just to find THREE flowering Butterfly orchid on those habitats and Orchis morio s.l. was very NOT around. And except for my two ‘old pals’ Dactylorhiza romana behind the rotten trunk, they were also not around in such numbers as they were two years ago. So after all this is maybe not such a very early orchid season? (Another remarkable observation: there was not ONE O. papilionacea around on the 1st of March 2010, only Dactylorhiza and Orchis morio s.l.). 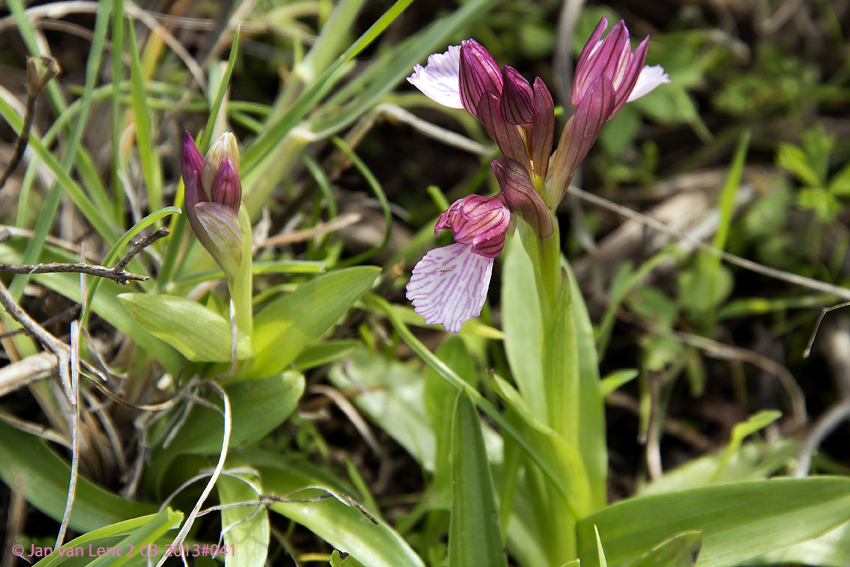 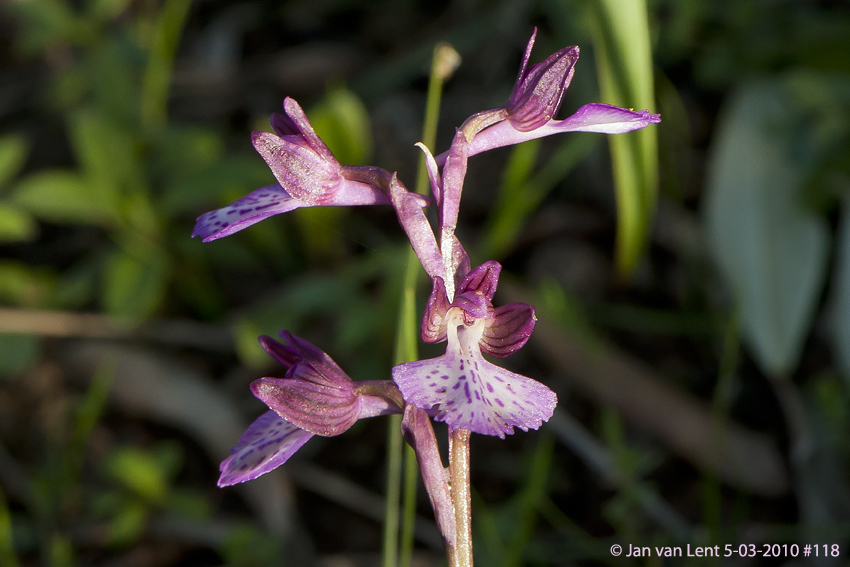 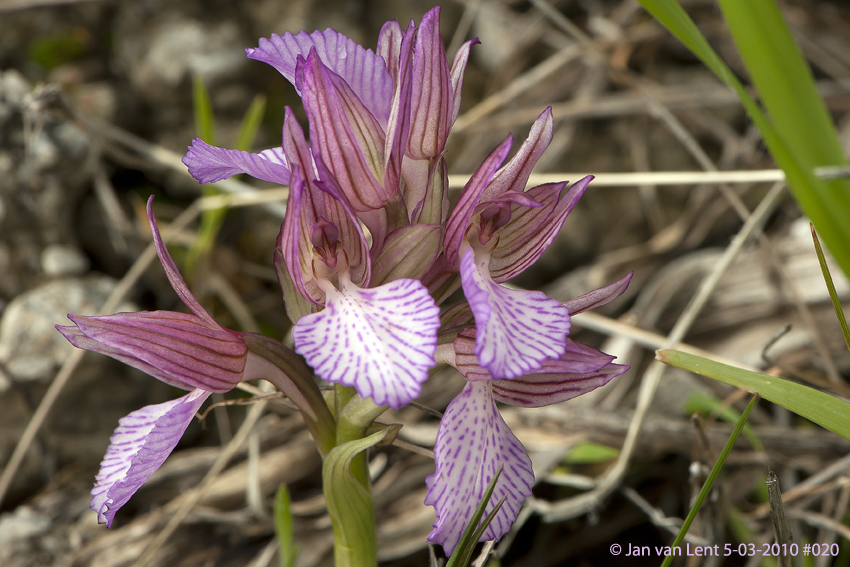 PETROU et al. (2011): Anacamptis papilionacea (L.) R. M. Bateman, Pridgeon & Chase. Ah, back to just papilionacea and they agree on the name change from Orchis to Anacamptis. But: ‘The species show great variability and a lot of local, possibly habitat-dependent, forms that have been treated by various authors alternately as subspecies, varieties or forms, often without sufficient evidence, creating great confusion.’ And: ‘Delforge (2005) reduces all these subspecies to varieties (yes, that was a clever move of Delforge, another 4 orchids on his name – JvL), we tend to agree, since we believe that their differences are not important enough, and most of them are probably local, habitat-dependent variants.’
Actually, I tend to agree too, because after going through all my papilionacea photographs between 2007 and 2013 – and I clearly see all the different varieties - I cannot put a determinative name on them, not even on heroica, not even just for one day…

BOTTOM-LINE: So Orchis papilionacea should now be Anacamptis papilionacea (L.) R. M. Bateman, Pridgeon & Chase? Because they rearranged Orchis and put 11 Orchis members in the genus Anacamptis in which, until now, only the solitary Anacamptis pyramidalis was living? And Orchis morio is now also Anacamptis morio, and which orchids more? Palustris, elegans, laxiflora, picta, boryi, coriophora, fragrans, collina and sancta…Moreover, by doing so they put their names in one big swap behind 11 Orchis taxa… brilliant! And also Kretzschmar et al. (2007) are swapping around with species and genera: ‘Within orchids in particular, it was found that two groups of species, up to now belonging to the genus Orchis, in fact belong to the genera Anacamptis or Neotinea, whereas only one species of the genus Aceras needs to be integrated into the genus Orchis.’
My God, all those name changes! Just because some species in the genus Orchis don’t want to intermingle with other members in the genus? Only with Serapias? Or are there other very important reasons – which I don’t know yet – for all these genus changes?Come on Orchid heroes Delforge, Baumann and Devillers-Terschuren: don’t let this pass unpunished, do something! Chase them, ignore them or – on my part – make up a subgroup or so, problem solved!
Oh, TYTECA & KLEIN (2008) did that already when they split the genus Orchis into four genera: Herorchis, Androrchis, Orchis s.str. and Odontorchis! PETROU (2011) made a remark on those ‘proposals’: ‘(it is) a view that has not met any acceptance.’ At this moment, my view on this whole genera name swapping matter is the same: it does not (yet?) meet any acceptance in my mind! Because subsequently I have to rename over 10,000 photographs in my computer… So come on; there are much more sensible things to do in life, let us hold on to Orchis papilionacea Link 1799… flowering from February until the middle of May. Piece of cake!

* The name Orchis is derived from the Greek word ‘ópxis’, meaning testicles, in reference to the two ovoid tubers of the plants.

David Bowie with Queen, after the death of Freddy Mercury 1992: ‘Heroes’.
www.youtube.com/watch?v=2JOvgfOkxgQ&playnext=1&list=PL584D6948A536FD59&feature=results_video 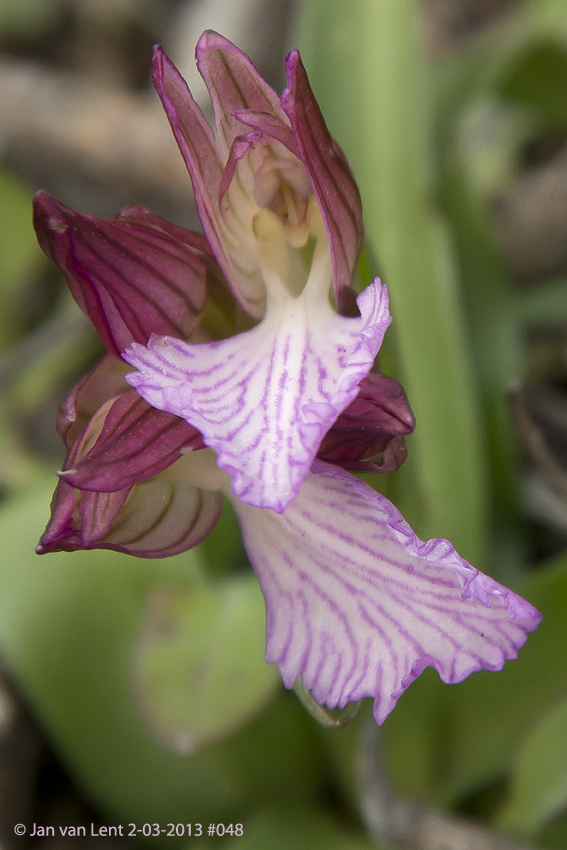 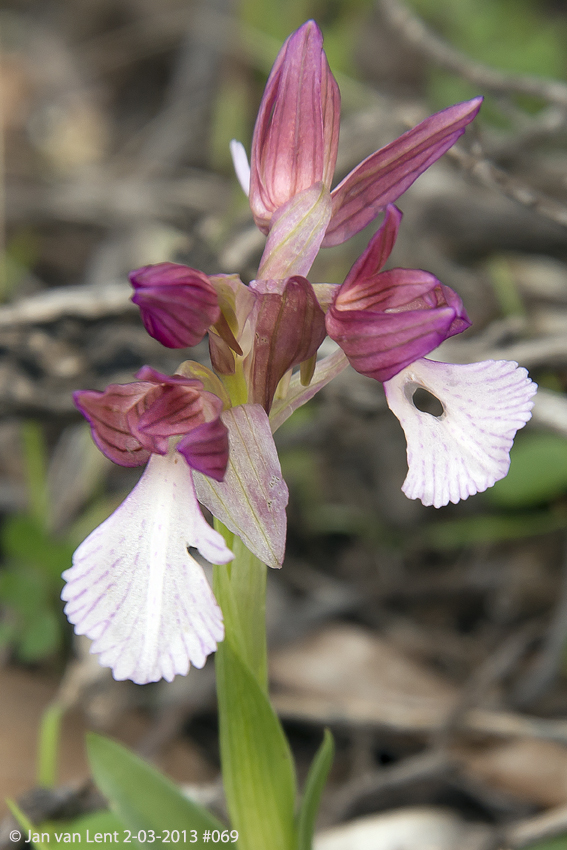 ETYMOLOGY: papilionacea: in the shape of a butterfly; heroica: heroic (An allusion to ancient heroes of the Trojan war). 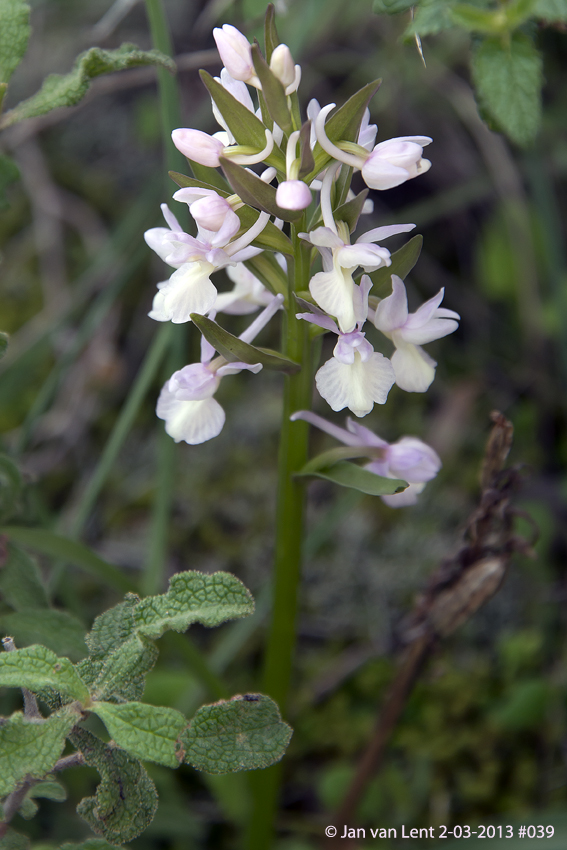 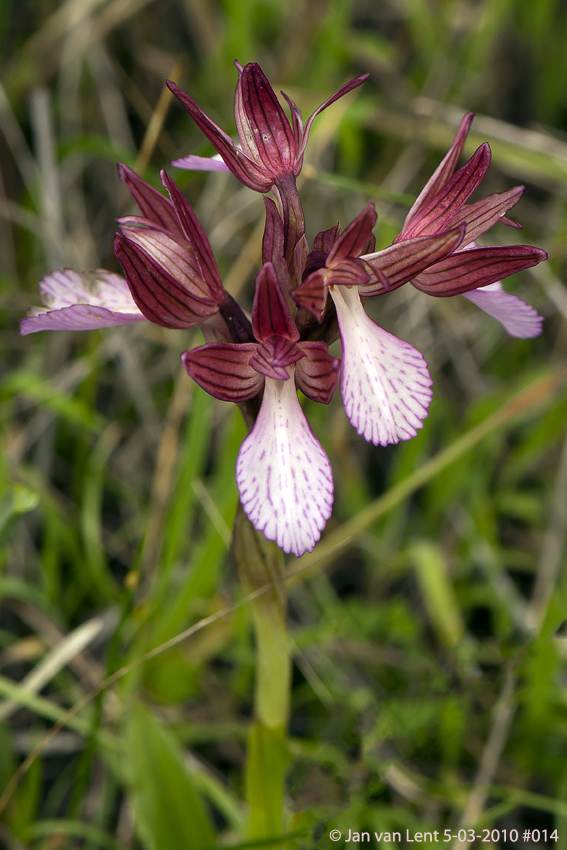 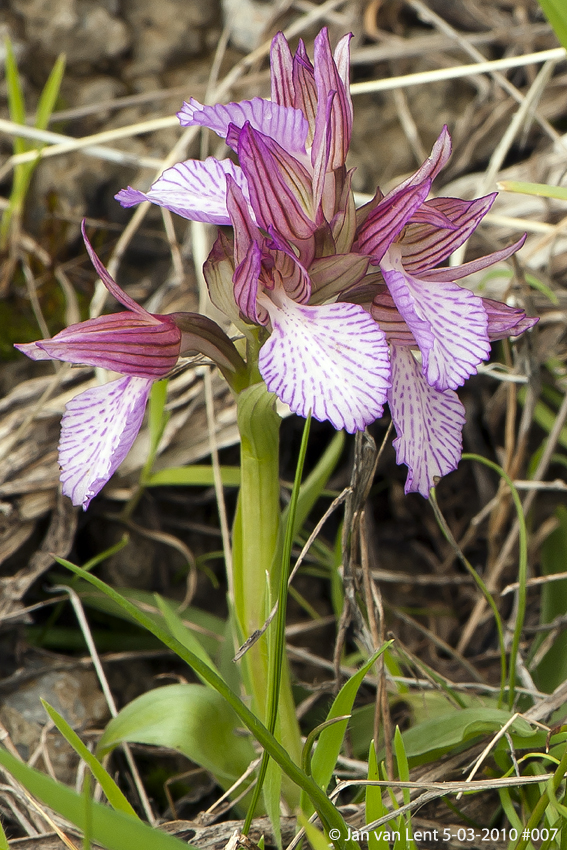 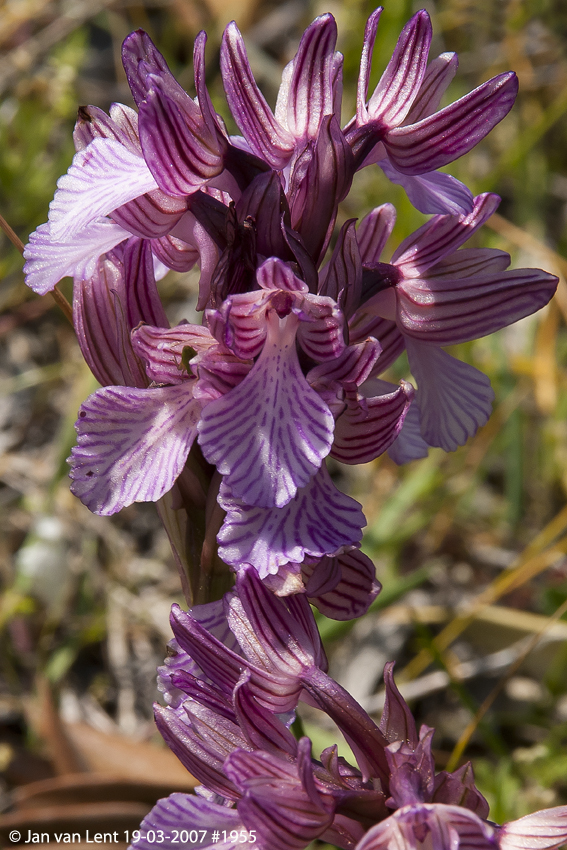 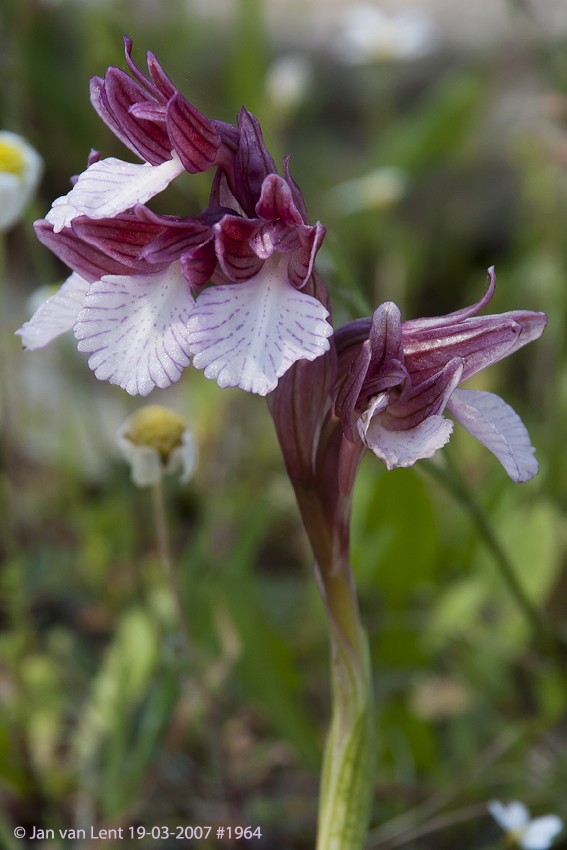 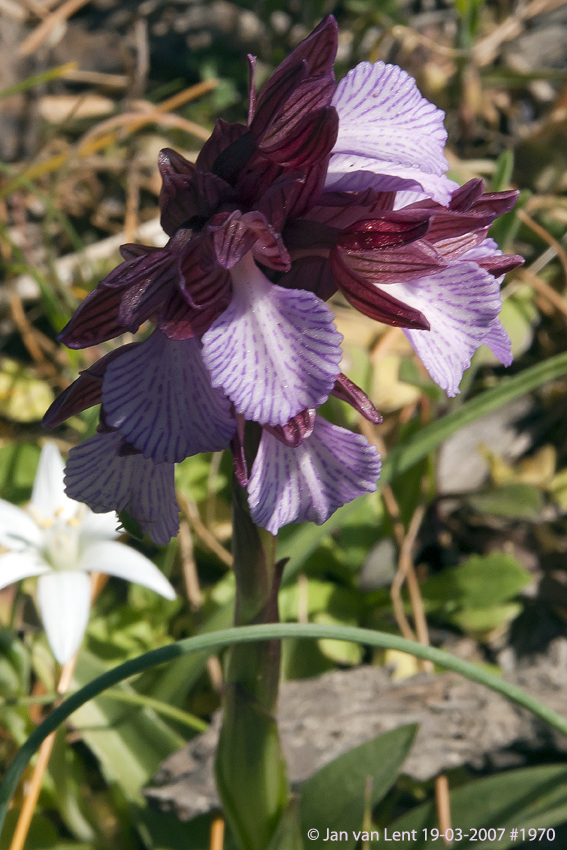 NAMES: E.D. Clarke = Edward Daniel Clarke (1769-1822). Clarke was a British mineralogist, archaeologist and globetrotter. Following a tour of Scandinavia in 1799, he travelled through Russia, reaching Constantinople in 1800, where his party devoted time to discovering the site of Homer’s Troy. Clarke was also an antiquary and while touring Greece he collected marbles, coins and vases and purchased a large ancient statue at Eleusis. Upon his return to England, Clarke presented his Greek marbles to the University of Cambridge, which later deposited them in the Fitzwilliam Museum. Clarke’s journals provided the content for six volumes of his Travels, published between 1810 and 1823. 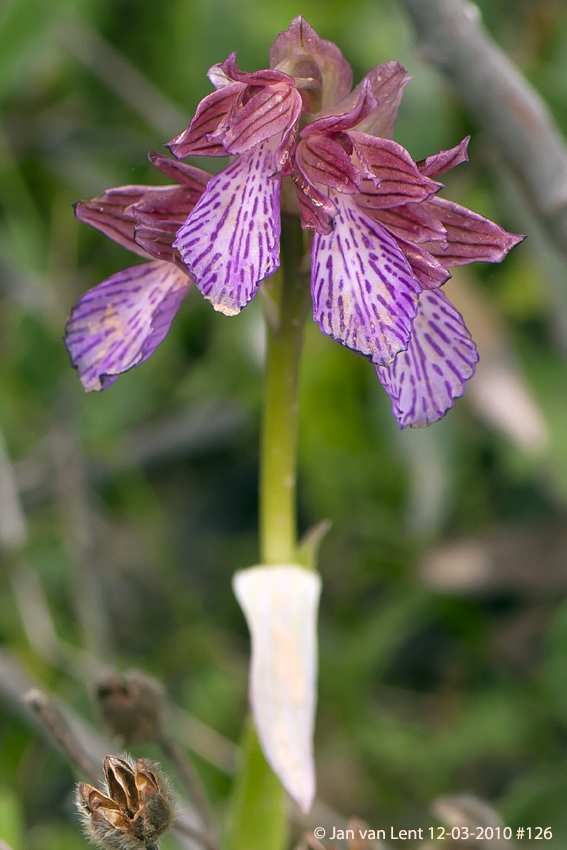 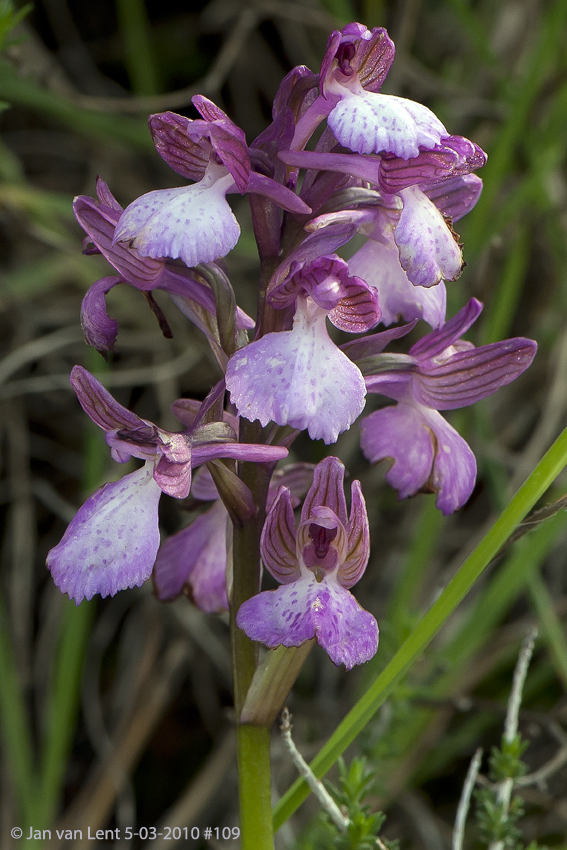 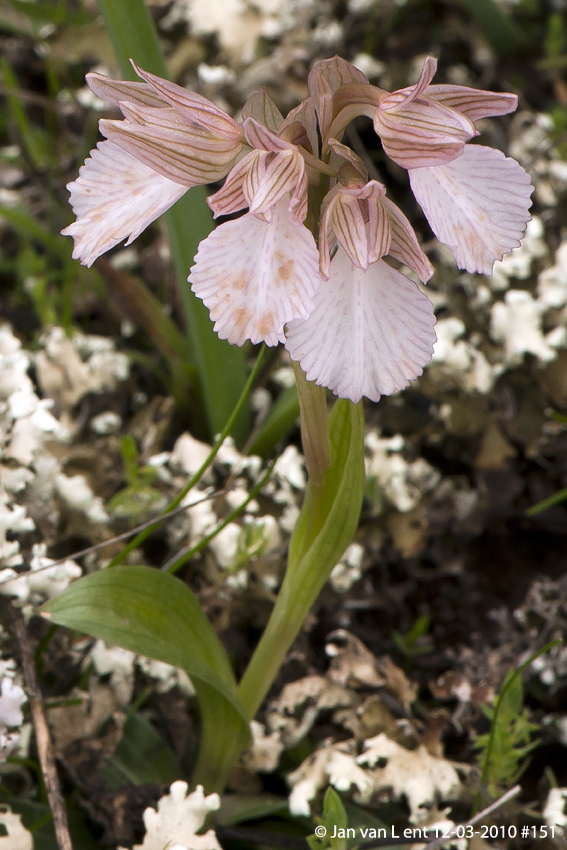 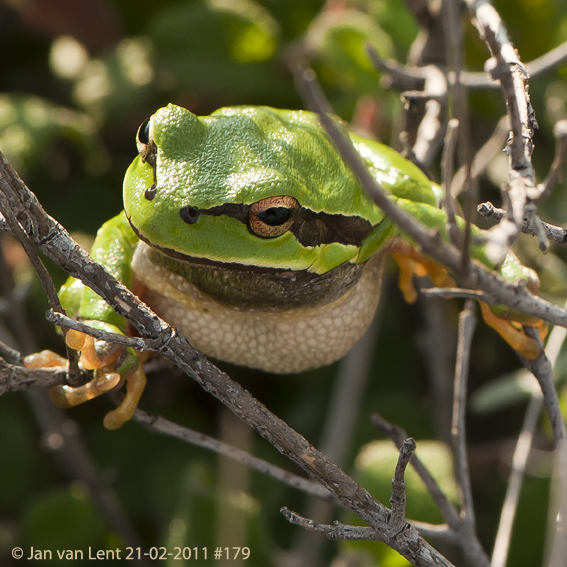