REMARKS: As a follow-up to my blog 17: ‘Ophrys fusca: that was only yesterday’, about the earliest of the Orchids on Lesvos, Ophrys sancti-isidorii Saliaris & Alibertis, I immediately went out hunting again to see if my theory is correct: that the first Ophrys from the Pseudophrys complex which are flowering on Lesvos is now Ophrys sancti-isidorii, followed by Ophrys sitiaca and the oriental version of Ophrys leucadica. And I also had to check if the Ophrys at Plakés (in the middle lobe of the island, between Vatera and Nifida) were already flowering and, if so, if they also had a red instead of a yellow edge on the lip.

HUNTING: But driving to this Plakés habitat so early this year was not easy because the dirt roads and tracks were so filled with mud and water, that even in a four-wheel drive it was too dangerous to drive to the spot (and not able to reach it, I had to go backwards all the way back up a steep hill with a stinking clutch), so we walked. For the first minute or so you don’t see the orchids, your eyes have to focus on them, like on mushrooms and wild asparagus, but after we climbed up to the higher olive grove suddenly the Ophrys were there, all around us, tens of them, we counted more than 60 plants on this spot. At this time of year there were no other flowers or orchids around on this isolated habitat, only the small brown Ophrys of the fusca-complex!

And it was not only just-opening plants, the Ophrys above (#057, #074, #070) which is in my opinion Ophrys sancti-isidorii, was 34 centimeters high and had 5 flowers (Saliaris mentioned a height of 7-17cm and between 1-4 flowers); they don’t grow so high in just one week so they had to have been there already for 2 weeks, so from the end of January. This big Ophrys had a yellow border on his lip, but looking around us we saw also a lot of Ophrys with a red border, for instance the Ophrys below. But this one was certainly not an Ophrys sancti-isidorii! To me this looks like the Ophrys leucadica (which according to some experts does not exist in the eastern Mediterranean)… And observe this beautiful speculum! I saw this speculum also this year on the Alifantá and Anemomilos Ophrys leucadica orientalis.

Looking around I saw between those 60 or so plants, apart from Ophrys sancti-isidorii, 4 different looking maybe hybrid species but no Ophrys sitiaca! After taking a lot of photographs and measurements  I went down to the track where my companions were waiting impatiently because there, in the channel next to the road and even on the road there were again tens of Ophrys flowering, which I (we) hadn’t noticed earlier… and if you compare this Ophrys with the ones from the same habitat last year and from the sitiaca from recent years in Alifantá you can’t ignore it: this is not Ophrys leucadica nor sancti-isidorii, those were for sure Ophrys sitiaca!

RESEARCH: The research on Ophrys sancti-isidorii (Blog 17) is almost the same as on Ophrys leucadica orientalis because until last year they were considered to be the same taxon. Ophrys sitiaca I researched already last year (see blog 2: ‘Boxing lessons’). And if the Ophrys leucadica here in the east of the Mediterranean are molecularly so different to the taxa in the west-Mediterranean, they still really look and are described alike. So to ‘delete’ O. leucadica in favor of O. sancti-isidorii, O. sitiaca or even O. pelinaea is in my opinion unfounded.  O. leucadica is a more ‘potent’ plant; the lip is just a little bit bigger than O. sancti-isidorii and more rounded, rhomboidal at the base. And Ophrys pelinaea flowers later, from the beginning of April (on Lesvos).

BAUMANN ET AL. (2006) Ophrys fusca ssp. leucadica: ‘Lip somewhat curved, brown, often yellow edged. Swellings at the base of the lip raised, side borders extended; east-Mediterranean. Synonyms: O.creberrima, Crete; O.cressa, Crete; O.eptapigiensis, Rhodes; O.leucadica, W-Greece; O. lindia, Rhodes, O.punctulata, W-Greece.’
So in their opinion Ophrys leucadica is west-, Ophrys fusca ssp. leucadica east-Mediterranean. Well…
But let’s stay today with the latest ‘Greek’ Orchid literature, ‘Orchids of Greece’ by PETROU ET AL. (2011) Ophrys fusca ssp. leucadica: ‘A taxon distributed from Dalmatia to Turkey; it occurs in the central and southern mainland, and the Ionian and Aegean islands.’  And their description of the lip: ‘slightly constricted at the base, nodding to pendant, rhomboidal, velvety, trilobed, reddish brown, with narrow yellow border.’ And about the speculum: ‘metallic blue, often with darker or white spots, its edge forming a broad, shinier or white ω; it often reaches the sinuses of the lateral lobes, and is bisected by a deep brown groove.’  This deep brown groove on the speculum I see only sporadically on the Lesvos Ophrys leucadica.
ANTONOPOULOS (2009) about Ophrys leucadica: ‘With a wide distribution, this is the earliest-flowering Ophrys of the fusca group, blooming before the other members in March in the Ionian Islands, southern Greece and the Aegean basin. It has a medium-sized lip, usually dropping and forming an angle of 45° with the stem, and has two semi-circular white areas at the lower edge of the speculum.’ And: ‘Ophrys leucadica is considered as an ancestral species, forming many local variations all over Greece.’
And yes, KARATZÁ (2007) also described Ophrys leucadica in his book. He saw them apparently around Pigí (on the Gulf of Gera), Thermí, Mória, Alifantá (yes!), Megalochóri and around Mésouna above Plomári (yes!), flowering from the beginning/middle of March until the middle of April.

So when I go through all my Orchid literature I’ve noticed that most Greeks, Germans and Dutch stayed with the name Ophrys (fusca ssp.) leucadica. Only the Belgians, French and some English ‘deleted’ Ophrys leucadica in favor of a new species and a new name.
And that again corresponds with a new book that I got this week, ‘Ophrys d’ Italia’ by ROMOLINI, SOUCHE & DOTTI (2012).The authors never mention one of the (east-Mediterranean) known Pseudophrys species in their book; they have completely different names for all of the species in the Italian fusca group except for Ophrys calocaerina Devillers-Terschuren & Devillers, which also flowers on Lesvos. Not made up by them (well Ophrys romolinii was made up by SOCA: ‘en homage au naturaliste Italien contemporain Rolando Romolini…ouch!), but a lot by Devillers-Terschuren & Devillers and Delforge. So if the Spanish orchidologists also make up their ‘own’ fusca-names the Tower of Babylon will be complete!
And my eyes felt unintentionally on this paragraph: ‘La plupart des nouvelles descriptions apparues depuis dix ans ont été réalisées par des amateurs non botaniste, avec parfois un manque de connaissance des plantes dans leur ensemble, de la bibliographie et tout simplement du Code de Botanique qui laissant perplexe. Il en résulte un nombre de synonymes assez consequent.’
In translation: ‘Most of the new descriptions that have appeared in the last ten years have been produced by non-botanist amateurs, with sometimes such a lack of knowledge of the plants’ families, of the bibliography, and of the basic Botanic Code, that it leaves one perplexed. The result is a significant number of synonyms.’
Again ouch, shame on you Romolini & Souche, almost all new Orchid descriptions and new fantasy names come from ‘professional’ botanists like Devillers-Terschuren & Devillers and Delforge, because (and then I have to guess) they want their name in Orchid history…
Nevertheless: a stunning book with beautiful drawings and lots of very interesting and historical background information on Italian orchids. (Only in French and Italian) 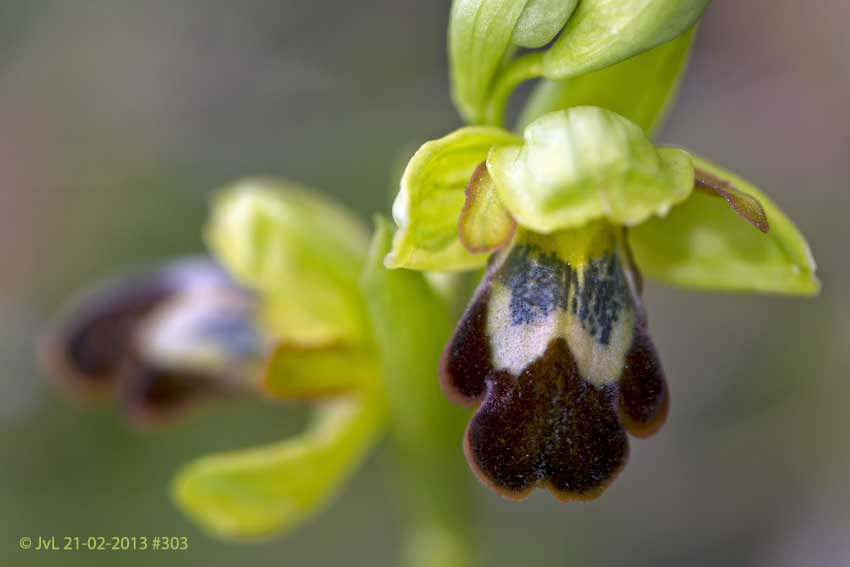 BOTTOM-LINE: For a final February hunt I went out on the 21st of February to check out the habitat where I found Pseudophrys (and Neotinea maculata) last year: the Aspros Glaros, the ‘White Gulls’ between Kalloni and Lambou Mili. And I also went again to Lambou Mili, Alifantá and Anemomilos to see what was new or what was changed in the last week.
In Aspros Glaros I found (as well as tens of beautiful white Crocuses, the first – not orchid – flowering plants except Anemones and Dandelions) again a group of already flowering Pseudophrys, 11 taxa, but only one of them could I identify as Ophrys sancti-isidorii (with a yellow edge on the lip). The others I still have to study carefully, they are maybe hybrids between Ophrys sancti-isidorii, sitiaca, leucadica orientalis and lindia.
On the parking spot near Lambou Mili nothing had changed, the 3 flowering Ophrys were still flowering, the 6 not yet flowering Ophrys were still not flowering.
And above Alifantá O. sancti-isidorii was also still flourishing, but also some newcomers were trying to get their flowers out: Ophrys leucadica orientalis!
At Anemomilos the group of O. sancti-isidorii was still there, but also some new ones had came up almost on the track, and there was this big newcomer: Ophrys leucadica, orientalis of course.

As ‘dessert’ one of the pictures I made – two weeks ago – of the already flowering Himantoglossum robertianum (ex Barlia robertiana – see Blog 5: ‘The big and the beautiful’ and Blog 7: ‘Lost in Wonderland’) in the ‘down under’ Eftalou olive grove. But will it last for another two months as it did last year? Because the lower flowers of this Robert’s Giant Orchis are already eaten… And I noticed that also a lot of Pseudophrys were already half eaten. Is there not enough food around for the insects, reptiles and the tortoises that they have to eat the orchids? Is the Greek human crisis also expanding to the ‘animal’ society? No money, no honey? 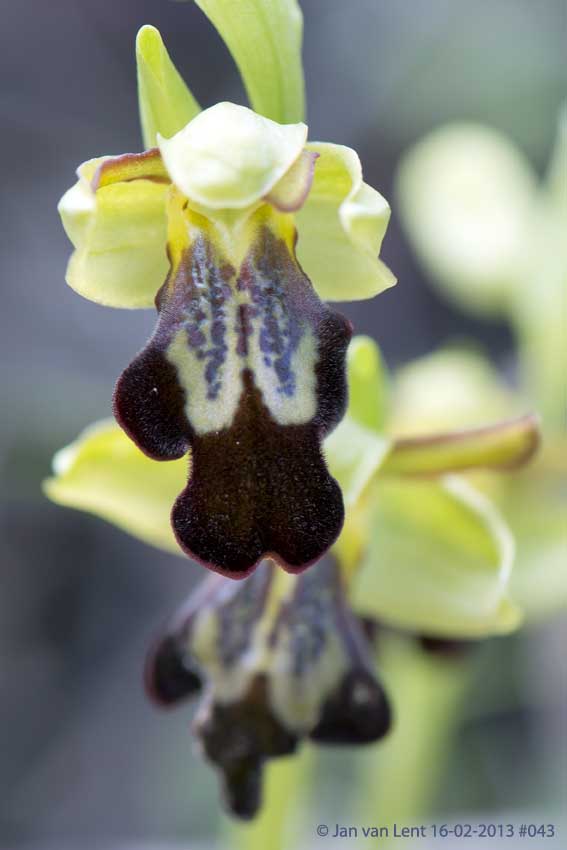 ETYMOLOGY:
Leucadica: from the island of ancient Leucada, nowadays Lefkada (one of the Ionian Islands).

ARTICLES & WEBSITES:
See blog 17: 'Ophrys fusca:
That Was Only Yesterday'. 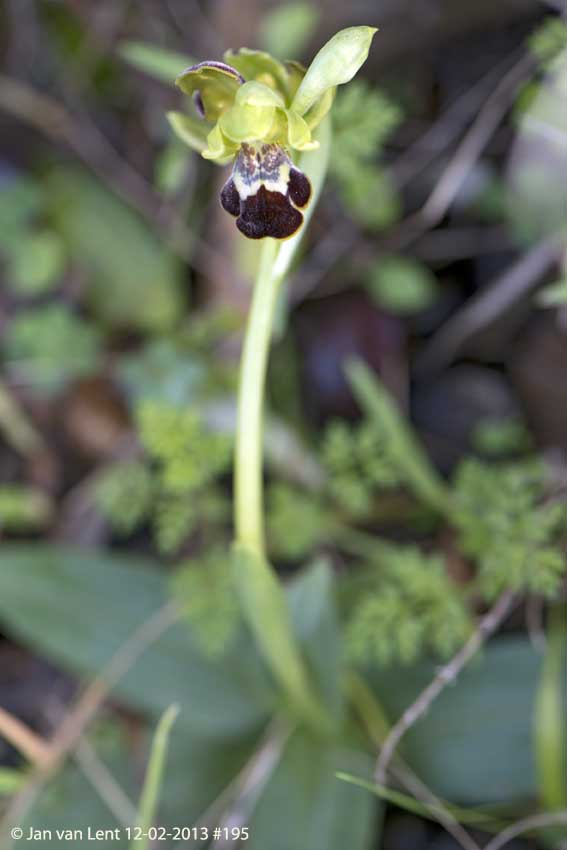 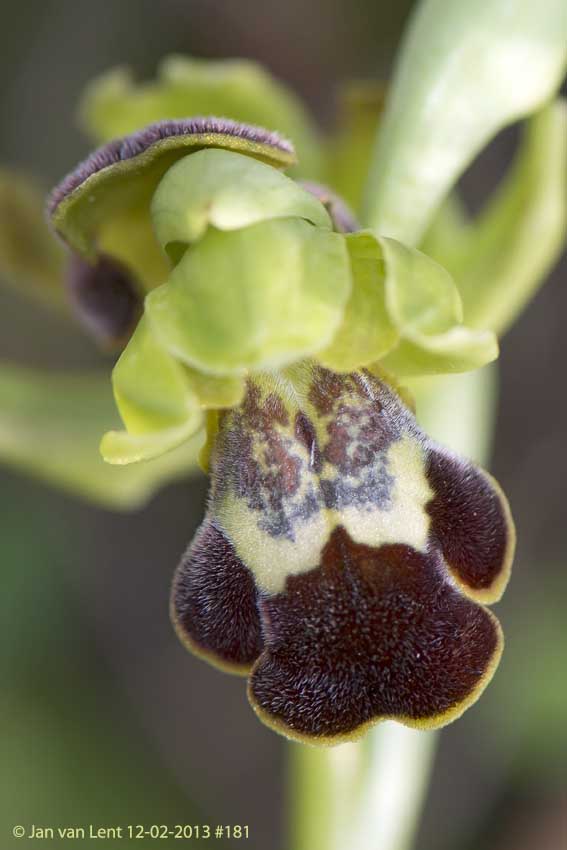 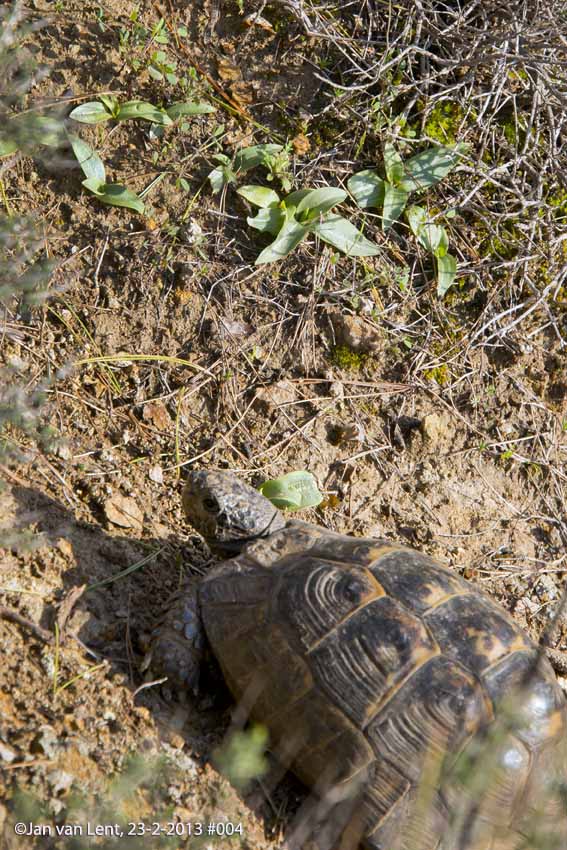