REMARKS: This will be the story of an ‘ordinary’ Ophrys fusca group, somewhere next to a parking spot in a Lesvos pine forest in the neighborhood of Lambou Mili, about the geographic middle point of the island. For three years now I’ve been following and photographing this group of the ‘Brown Bee’ Ophrys a few times a year – between January and May – to see how those thirteen Ophrys develop through the weeks and months. Are they all the same taxa – Oph. fusca subsp. fusca (PEDERSEN/FAURHOLDT, KEW*) – or could it maybe possible that there are more taxa around? And if so, then sooner or later we have to decide how ‘we’ should call them. Let’s do an exploratory expedition to the roots of Ophrys fusca s.l. 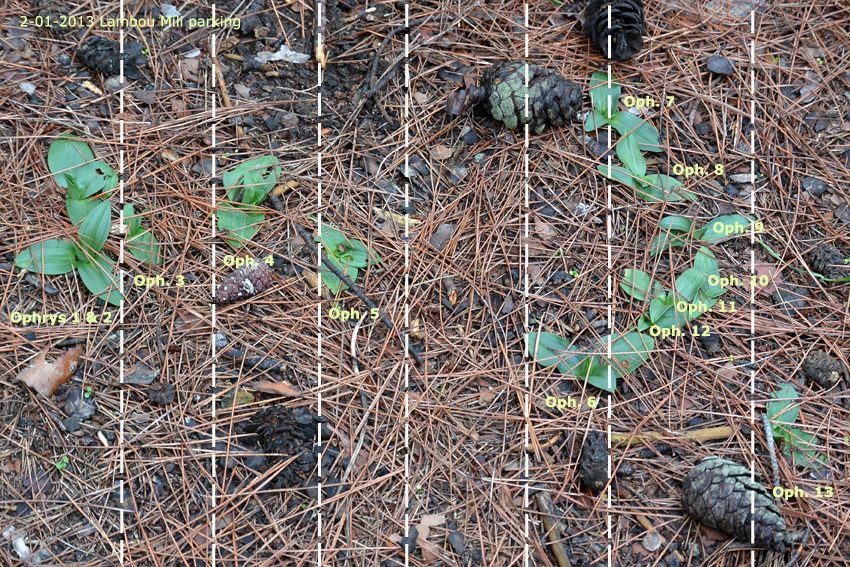 HABITAT: Although this story started on a beautiful spring morning in March 2011 when I, driving to Lambou Mili, had to stop in a parking space for a pee, jumped out of the car, walked into a ‘skoupidia’,  (a place where people illegally drop their waste in the countryside, an old tradition on Lesvos) and almost stumbled over a small group of Ophrys, thirteen taxa in total, some flowering, some just in bud, some showing only their rosettes; I will start this Ophrys fusca (subspecies) investigation in the darkest days of the year – on the earliest January days of 2014. 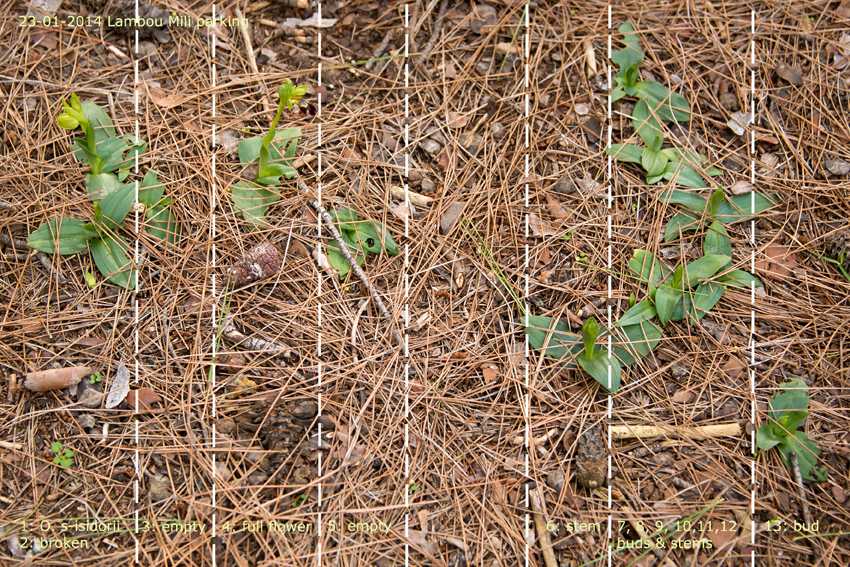 PART 1: So I went back to this parking place a couple of times in 2011 and 2012, a lot of times in 2013 and now in 2014, I went in on the 2nd of January to photograph the rosettes.
I estimated that I had to wait a month or more before the first flowers should appear but I was wrong, on the 23rd of January two of the thirteen species were already flowering; Ophrys 1 and 4, from Ophrys 2 the flower was broken off and lying on the ground. Most of the other Ophrys already had a stem. The question now is of course: Which are the first 2 species to flower on this habitat and what do I call them? For the regular readers of my blogs this will not be a surprise: I call them Ophrys (fusca subsp.) sancti-isidorii (see Blog 17: Ophrys fusca: ‘That Was Only Yesterday’ & 29: ‘DNA, NAMES, the GOLDEN ORCHID AWARDS & Ophrys sancti-isidorii.) 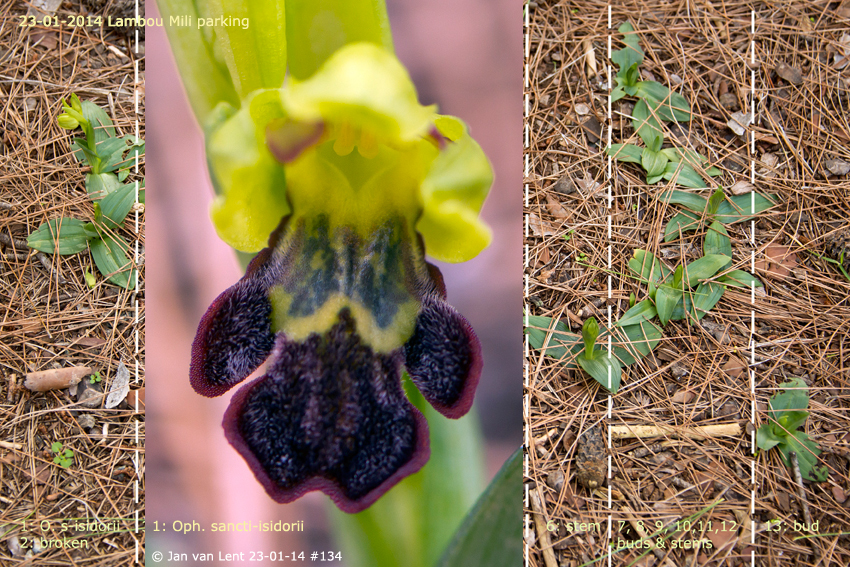 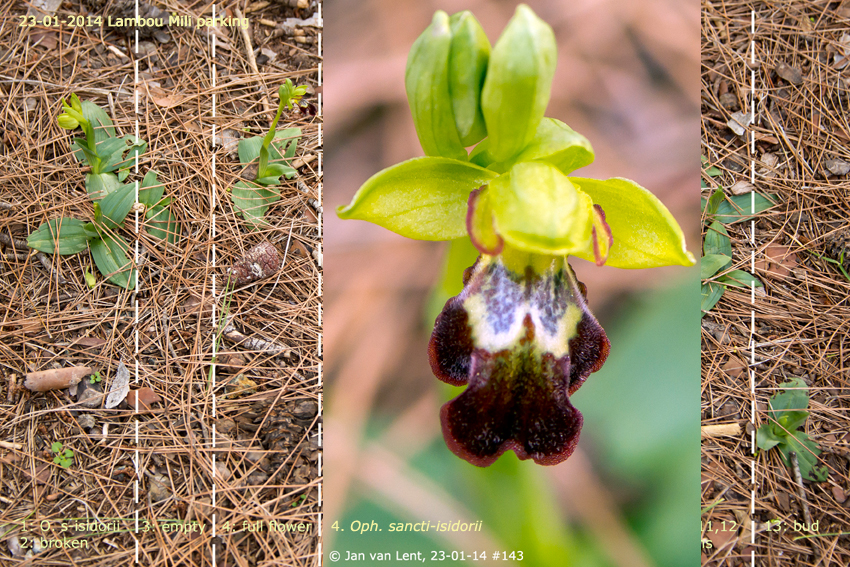 BOTTOM-LINE: Before SALIARIS & ALIBERTIS described Ophrys fusca subsp. sancti-isidorii from Chios in 2010 I called them –with a working name – Ophrys prin-pelinaea. Prin  = ‘before’ in Greek, and pelinaea should be its name because DELFORGE decided in 2007 that there were no Ophrys leucadica anymore in the eastern Aegean (only in the western Mediterranean) and that the name should now be Ophrys pelinaea, flowering from the middle of April. So then there was a very big time gap between my first flowering Ophrys in January – without a name – and Ophrys pelinaea from the middle of April. My God, by that time the Ophrys season on Lesvos is already almost finished…So when SALIARIS & ALIBERTIS came up with Ophrys fusca subsp. sancti-isidorii I finally could give those Ophrys prin-pelinaea on Lesvos a real name. And now I’m waiting for the first Ophrys (fusca subsp.) leucadica to appear, orientalis by all appearances…

Appearances can be deceiving: Mat Kearney 2011: ‘Sooner or later’
http://www.youtube.com/watch?v=YfF3BKLJjJ8

The Fusca-group is one of the six groups (ANTONOPOULOS 2009) of the section Pseudophrys which flower on Lesvos; the other groups are: the Iricolor group, the Attaviria group, the Blitopertha group, the Lutea group and the Omegaifera group.

The Ophrys fusca-group on Lesvos exists (so far as I know, beginning of 2014) of 9 species: Ophrys sancti-isidorii (blog 17 Ophrys fusca: ‘That Was Only Yesterday’ & blog 29: ‘DNA’), Ophrys leucadica (blog 18: ‘No Money, No Honey’), Ophrys cinereophila (blog 21: ‘Not Fade Away’), Ophrys lindia, Ophrys attaviria, Ophrys parosica and/or phaseliana, Ophrys pelinaea and Ophrys calocaerina. 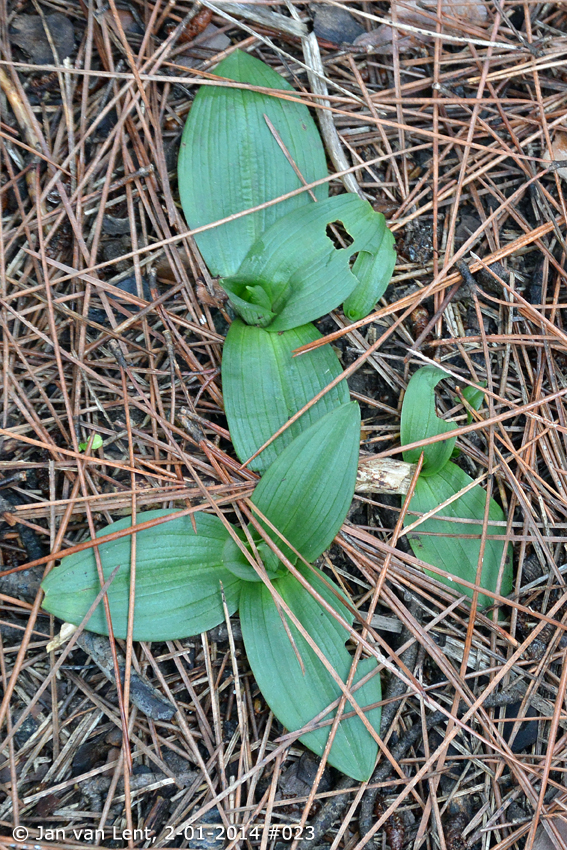 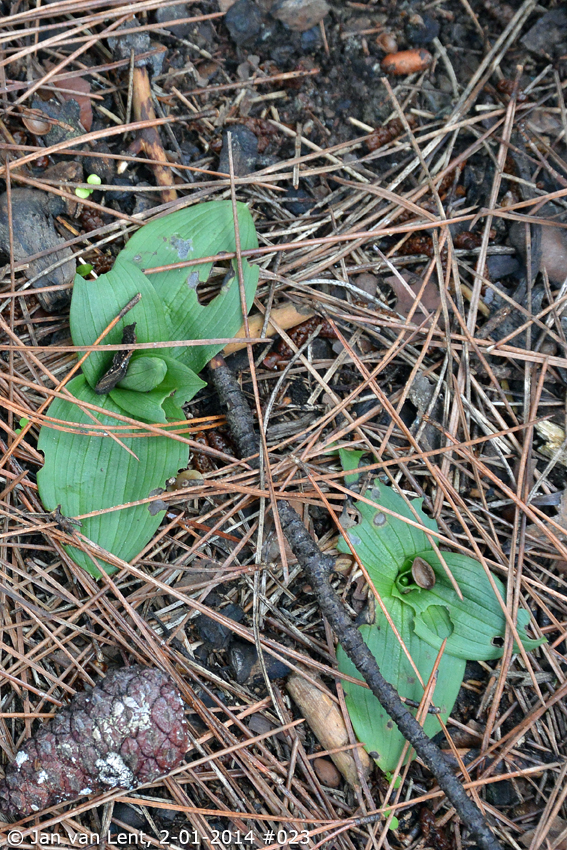 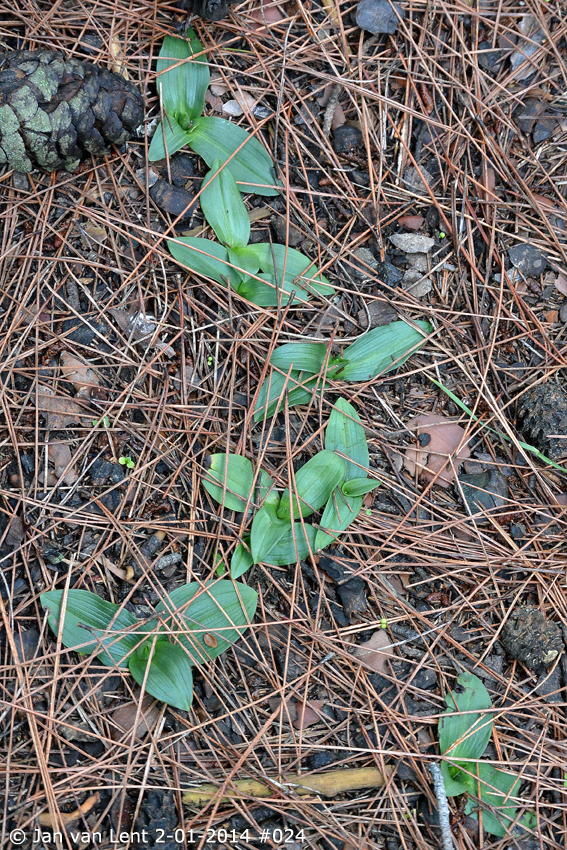 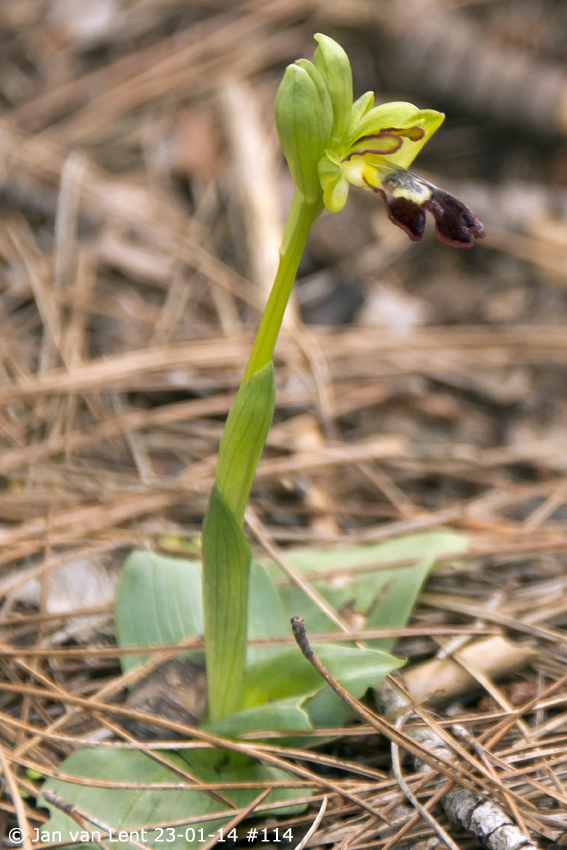 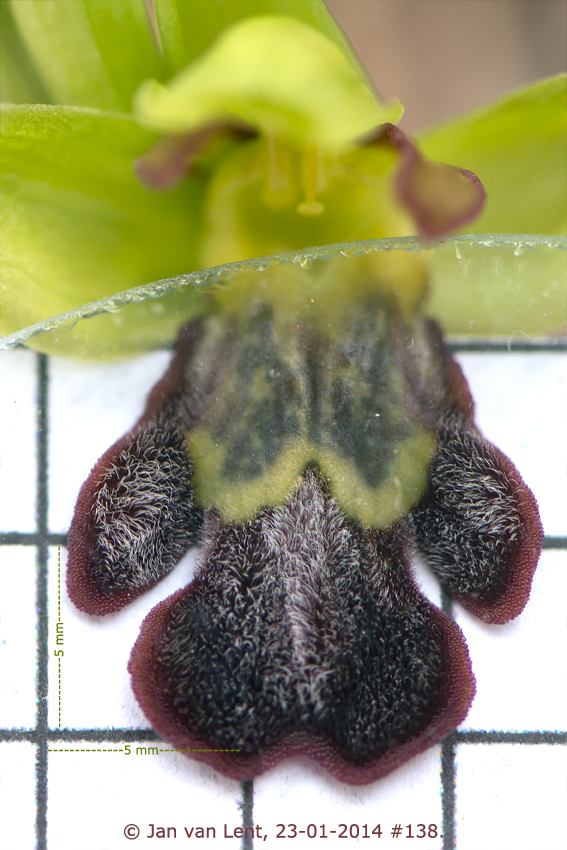 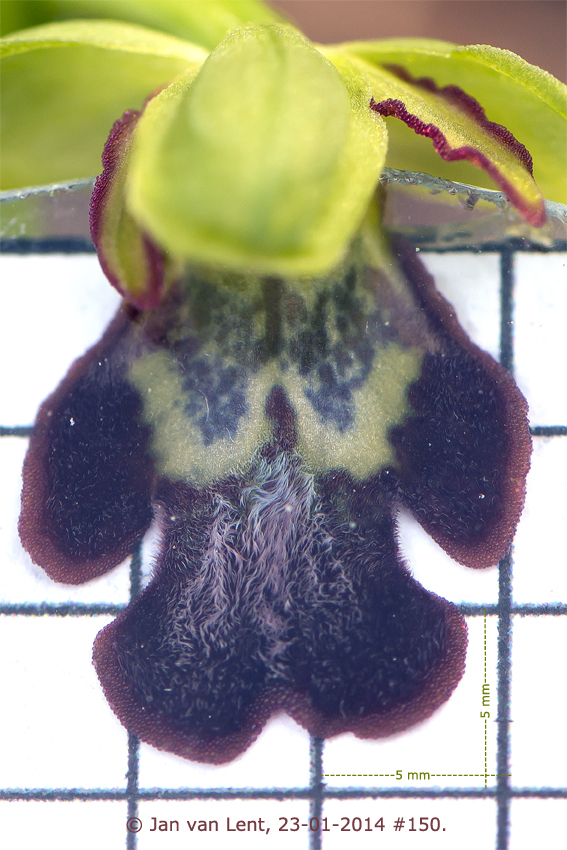 New this year will also be my new method to measure the size of the flower and to have a better view of the form of the side lobes: on 5mm squared paper. But the ‘old’ measuring method will also be maintained. 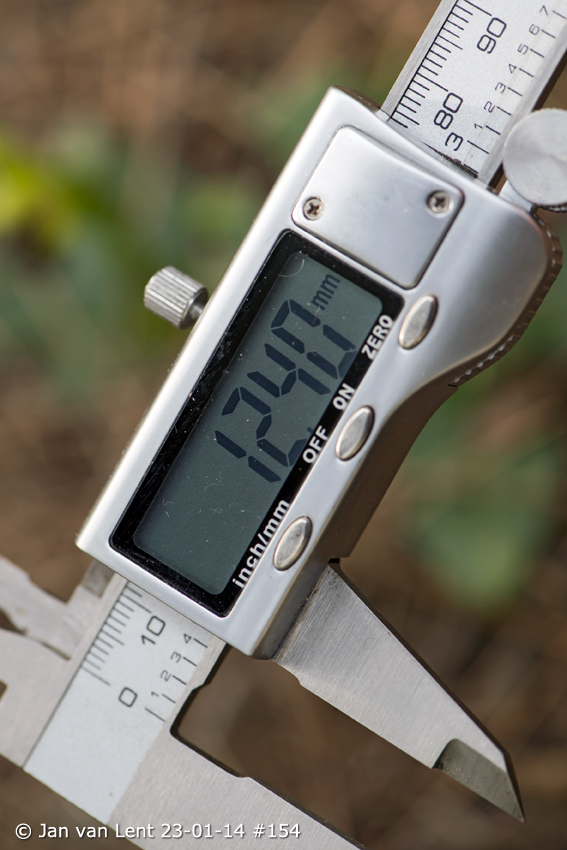