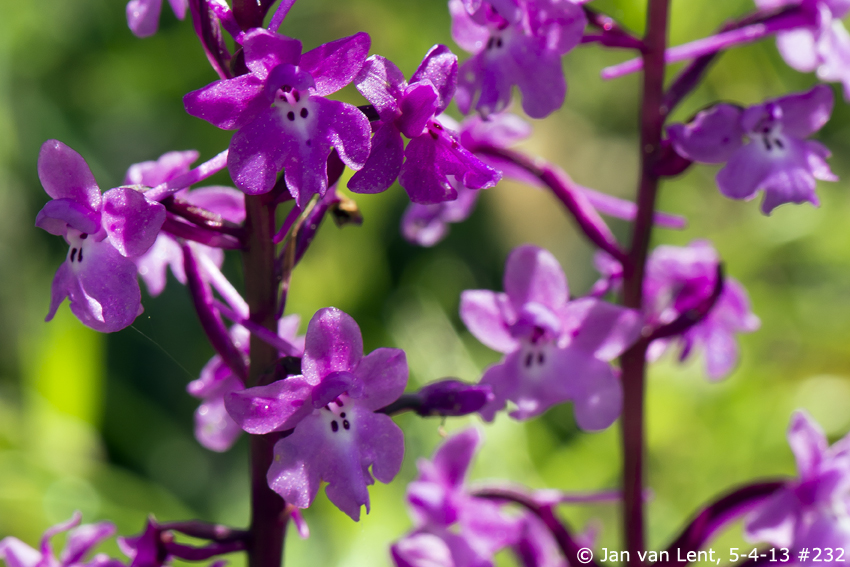 REMARKS: Most European and Greek orchid books mention only Orchis provincialis and Orchis quadripunctata from the Orchis mascula-group (DELFORGE 2005) as flowering on Lesvos. Daredevils like BAUMANN ET AL. in 1991 already featured  Orchis sezikiana as an autonomous sister taxon next to O. quadripunctata, but later on they declared it a subspecies. The experts are not sure about the existence of Orchis anatolica on Lesvos and almost nobody (except BIEL 1998 and KARATZÁS 2008) mentioned Orchis pinetorum as flowering on the island…
Already at the end of the 19th century CANDARGY (1897: O. anatolica) & (1898: O. quadripunctata) was apparently not too sure about the characteristics of and the differences between O. quadripunctata and Orchis anatolica on Lesvos.

As wasn’t BIEL (1998), because he didn’t list O. anatolica (nor O.sezikiana) as flowering on the island, only Orchis quadripunctata. And that was and is a surprise because he studied the island flora very thoroughly during 10 years. So didn’t he find Orchis anatolica on Lesvos? Well (translation by JvL): ‘The habitats known by the author contained mainly typical examples of O. quadripunctata, besides also individual divergent examples within the population with for instance a slightly elongated shape of the lip, with rounded lobes and 5 or 6 dots at the base of the lip. In addition 2 surveying groups reported 1 to 3 sites with O. anatolica. One report could be checked on the basis of surviving pictures. This turned out to be a very differently example of O. quadripunctata to the variation already described by RENZ in RECHINGER (1943): “O. quadripunctata is in the form and division of the lip very variable, rarely round and undivided. The inflorescence is occasionally elongated…” The second report was withdrawn by the finder after discussion of the sort norm (also divergent single examples).’ So a lot of confusion about O. anatolica and O. quadripunctata through the years, maybe O. quadripunctata is an Orchis in disguise… 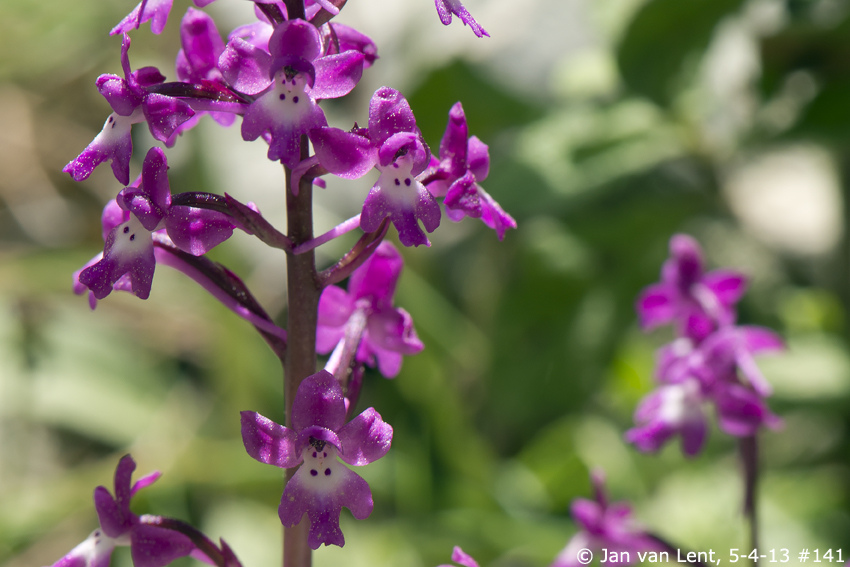 And was it all just about counting the dots? The ‘normal’ Orchis quadripunctata (which means of course four points or dots) should have 4 to 6 dots. This generally small Orchis has a dark red/purple stem and rosette leaves also with dark dots. The flowers are small and vary between pink, purple and white. The lip has 3 almost equally lobes, and is lighter in colour or white towards the base. The spur is long, thin and should be curved downwards. But to make it more difficult: I’ve seen quadripunctata with just 2, 3 or 5 dots or no dots at all and we don’t call them duopunctata, trespunctata or quinquepunctata. Well, chorispunctata I’m using for the taxa without dots.

HABITAT: One occurring problem is that sister species (or subspecies) Orchis (quadripunctata ssp.) sezikiana is almost always around on the same habitat as quadripunctata. This taxon should have between 8 and 12 dots, longer sepals and a longer lip, a thicker and somewhat ascending spur which should be even as long or a little bit longer than the ovary (BAUMANN ET AL.). And because both taxa are flowering on the same habitat at the same time there are a lot of hybrids between them (see #492 & #487). Actually almost every habitat on Lesvos has its own hybrids between quadripunctata´s and sezikiana´s. And to find a ‘normal’ Orchis quadripunctata was exceptional difficult this year as you can see in the above photographs #141 (spurs thin and curved downwards, middle lobe longer than side lobes) and to the right #041 (spurs pointing upwards and green stem). 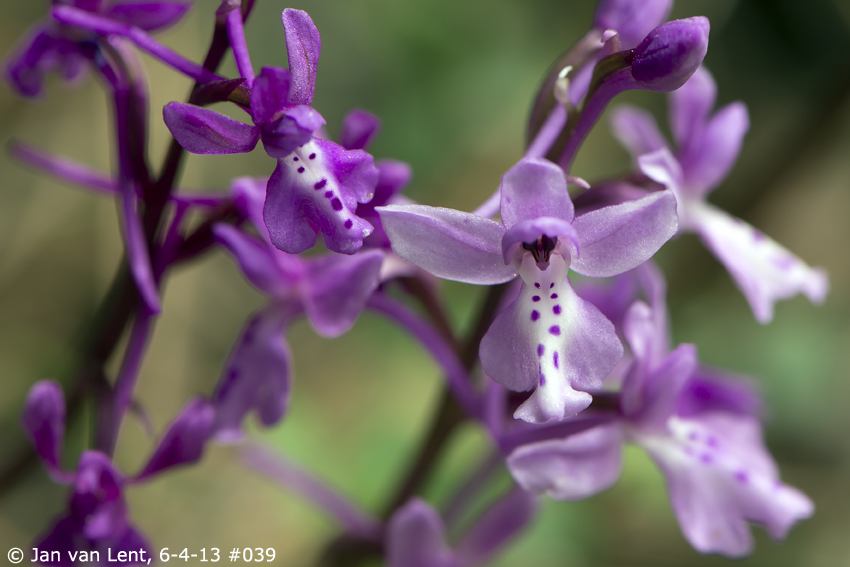 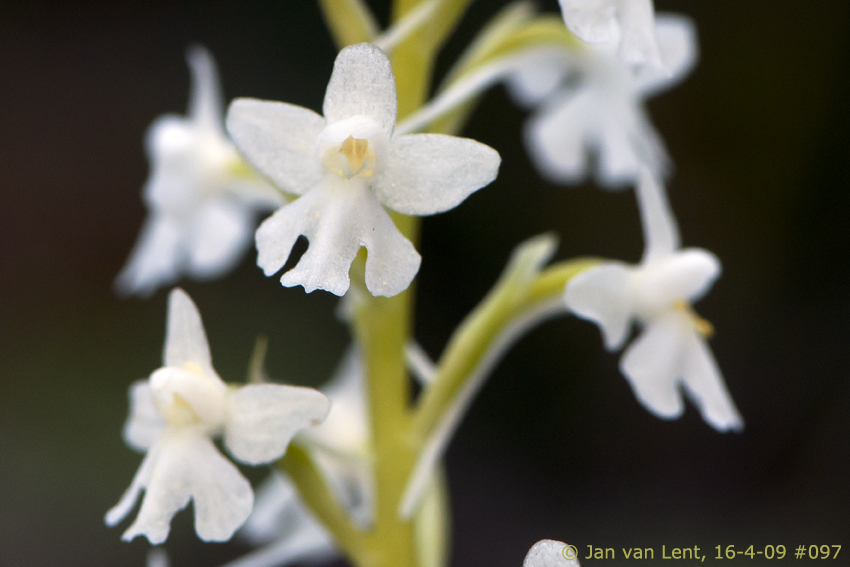 And besides the hybrids there are also the pure white ones with red dots: var. albiflora SUNDERMANN, although only SUNDERMANN (1980) and KRETZSCHMAR (2004)have photographs of those variations. But Lesvos wouldn’t be Lesvos if we didn’t have other quadripunctata specialities like a pure white var. albiflora without red dots.
And I also found  a bicolour pink version with a dot-less lip that looks like Orchis quadripunctata var. brancifortii (BIV. 1813 p.sp.) BOISS. 1882 or in DELFORGE (2005) just Orchis brancifortii BIVONA-BERNARDI 1813 from Sicily and Sardinia, but mine has a bigger middle-lobe. If I should give this Orchis a (working) name then I go for var. theophrastinii after Theophrastos from Lesvos* instead of the Italian Prince Branciforti. Unfortunately I found them only once, so actually I can’t make two new taxa out of them… 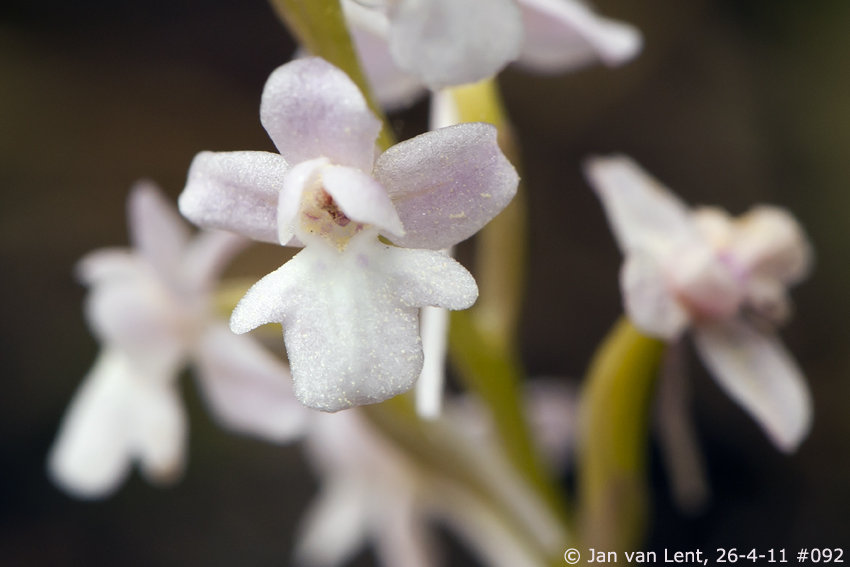 SUMMARIZING: So reports of the existence of ‘real’ Orchis quadripunctata exists only from mainland Greece, the Peloponnese, Lesvos, Chios maybe and Crete. Not on Cyprus or Rhodes. And in Turkey only from one isolated spot in the north. 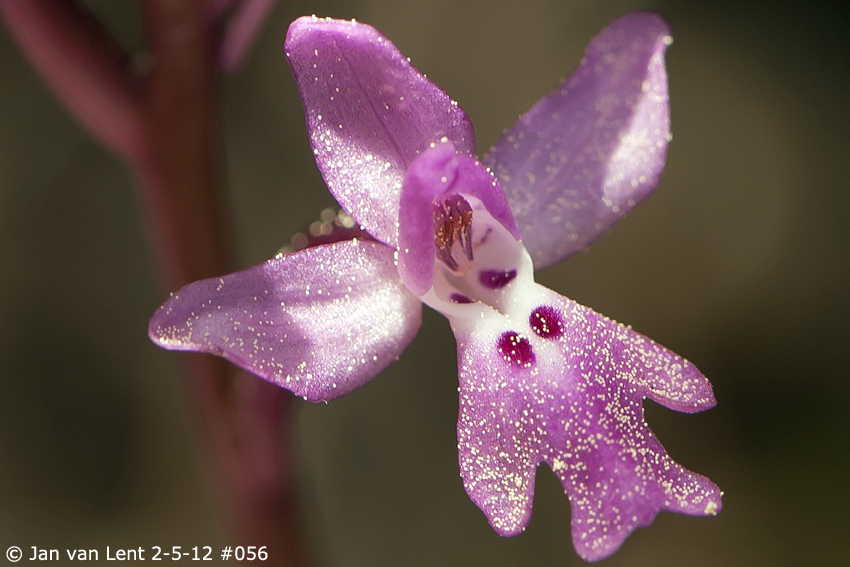 BOTTOM-LINE: In an isolated spot in the Pine forest around Sanatorio Agiasos I found on 2-5-2012 a group ‘quadripunctata’, indeed with four spots, but the form of the lip is not quadripunctata nor sezikiana nor anatolica; it looks more like a small mascula or pinetorum. Pinetorum? Wasn’t it BIEL (1998) and KARATZAS (2008) who mentioned (as the only ones) O. pinetorum as flowering on Lesvos? Let’s have a look: ‘The species is probably very rare on the island, with until now 2 finding places (5 reports) with each time very few examples in the higher sites at the Olymbos mountain. They grow as well in the Pinus brutia forest on serpentine as also in the Chestnut forest on schist.’ (Abb.23: O.pinetorum Boiss. & Kotschy. 14.05.93 M. Parsons, Agiasos.) But Biel’s picture is so dark (and in black & white) that I even couldn’t recognize my mother if she was on it…
KARATZÁ’s 4 photographs (I suppose from Sanatorio and surprise, Vasiliká) are much better but I only recognize O.pinetorum in 2 photographs, the 2 others are in my opinion hybrids between O. anatolica and O.pinetorum. When I came back this year (on 29-4-2013) to exactly the same spot as on 2-5-2012 to look for ‘my’ pinetorum I was almost too late; almost all orchids were withered because of the sudden heat wave in the middle of April this year. 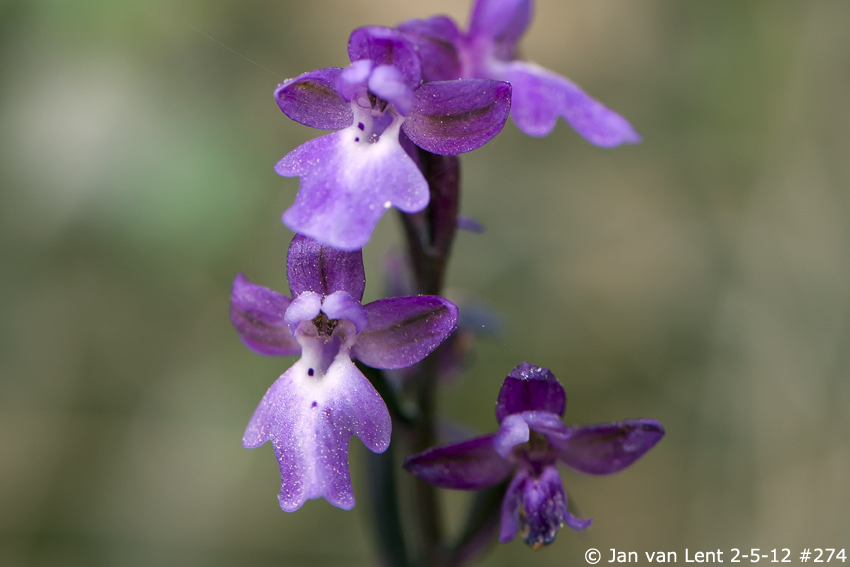 I drove on that day through the Chestnut forest in the direction of Karionas. In the corner of a small hill I stopped for another quadripunctata shoot, at least that was what I expected. But those mascula-group species didn’t look like a recognizable taxon either, maybe another Orchis in disguise, Orchis pinetorum or var. theophrastinii? Or is it again Orchis sezikiana which is maybe slowly, slowly absorbing Orchis quadripunctata on Lesvos?

*THEOPHRASTOS or THEOPHRASTUS (Lesvos, 372-287 BC), the “father of botany” was born on Lesvos and the first author to have used the word «orchis» (in ‘De Historia Plantarum’ [On the Natural History of Plants]).