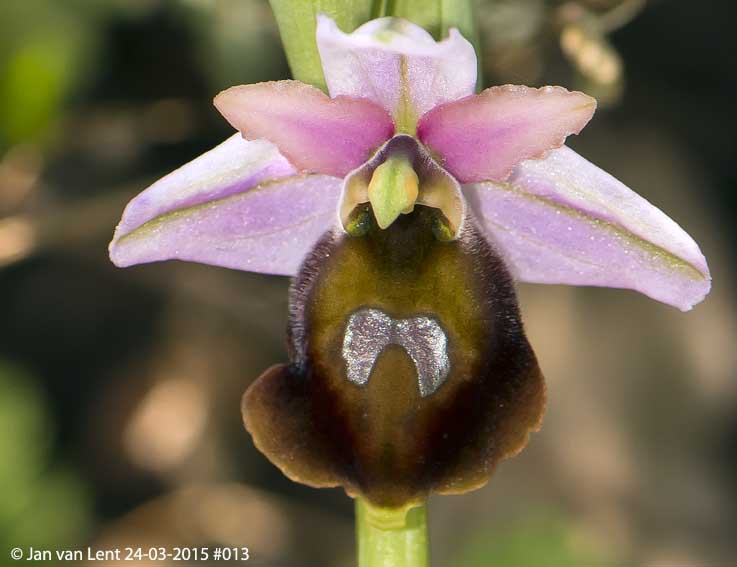 HUNTING: Ophrys lesbis is not rare on Lesvos, but you have to know where to look and you have to be lucky with the time and your charter flight… because this Ophrys is flowering from the middle of March to the middle of April. There are no charters around so ‘early’ in the season so if you take a regular flight you don’t have to fight with other orchidologists to secure THE spot for your photograph of Ophrys lesbis. And talking about where to look: I knew that Ophrys lesbis was flowering around Andissa in the west of Lesvos but it was not so obvious that I could find it immediately.  It took me two years ‘with a little help from my (orchidologists) friends’ to hunt it down for the first time. When I found her she (I think the word lesbis should be female) was growing on a steep slope on the side of the road which is leading from Andissa to Gavathas. 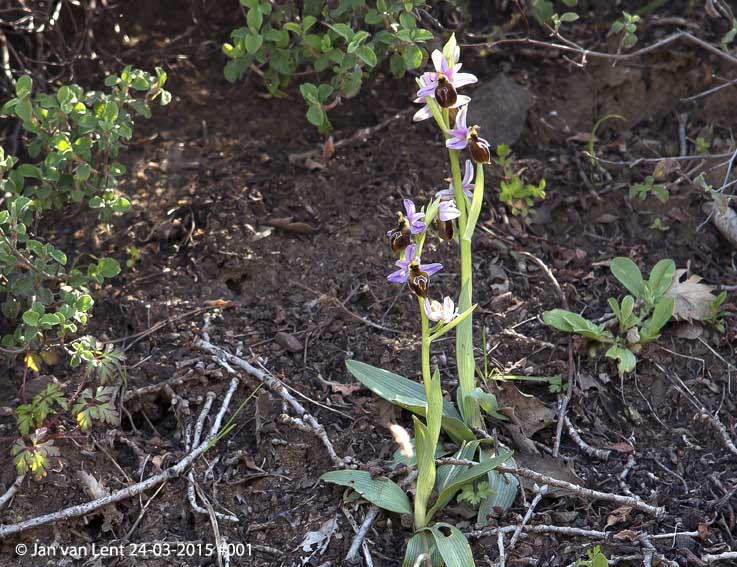 HABITAT: But I don’t know how long those habitats will survive when I see the recent road building activity in the west, not only between Sigri and Andissa but also between Andissa and Gavathas… Strangely enough there were (almost) no orchids in sight on the Andissa habitat this week. Only one very small Ophrys sicula peeped up between the thorny bushes.  I was surprised because normally I find tens of orchids on this Andissa slope, and not only the ‘lesser’ genera like Orchis collina & sancta but also the ‘upper class’ like Ophrys lesbis, bucephala, oestrifera s.l. (cornutula?), fusca s.l. (lindia?), mammosa and sicula. Anyway, after I finally found one ‘lesbis’ habitat it was not so difficult to find more in the surroundings: on a sidetrack from the road to Lapsarna and on the Lapsarna road itself. But this week (24-3-2015) I also found a solitary Ophrys lesbis in the old oak forest where last year I found Ophrys apifera and – next to the road – Orchis purpurea: on Mt.Fouga. 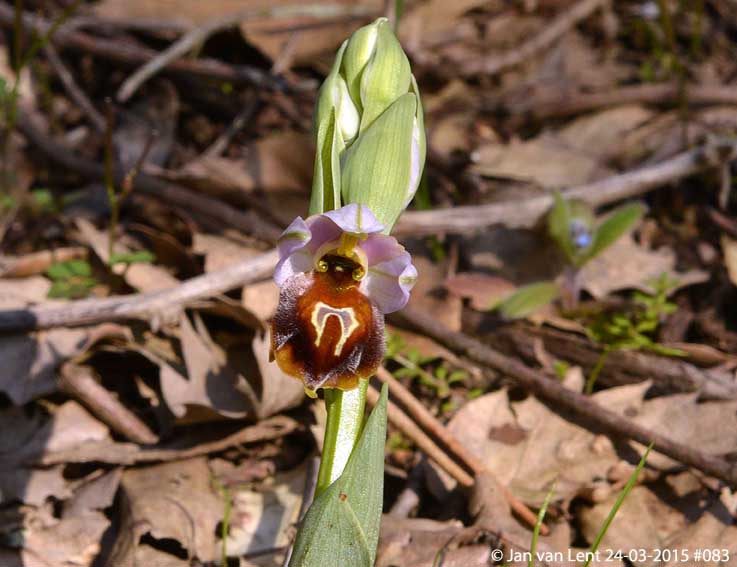 So which ‘challenge’ do we have to encounter on looking at and photographing Ophrys lesbis? First the name: is it a subspecies from Ophrys argolica or is it an autonomous taxon? And anyway, should anybody in the field – lying in the mud between snakes & thorny bushes – care about this? 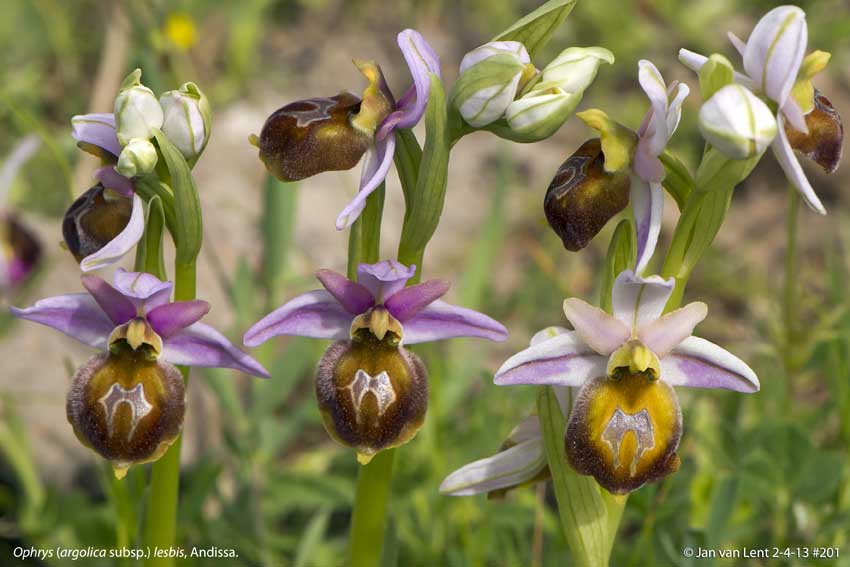 RESEARCH: In the days of SUNDERMANN (Europe & Mediterranean, 1980) there was only Ophrys argolica from Greece and maybe also from the south of Turkey. Interesting is the observation from Sundermann that: ‘it looked like Ophrys ferrum-equinum, with which it partly conjoint, but whose lip has in every part only very short hairs and doesn’t (with only a few exceptions) have the white hairs on the ‘shoulders’. Also in 1980 Ophrys argolica H. FLEISCHMANN ap. VIERHAPPER 1919 was described from Argos in Greece. KALTEISEN & REINHARD described in 1987 Ophrys aegaea from Karpathos and Ophrys lucis from Rhodes. GÖLZ & REINHARD described in 1989 Ophrys lesbis from Lesvos.

GÖLZ & REINHARD (1989) the authors of O. lesbis themselves: ‘Ophrys lesbis belongs to the Ophrys aegaea-argolica complex (cf. Kalteisen und Reinhard 1987). We have for this reason put them under Ophrys argolica with the addition that it presents as a distinctly divergent relative from the type of O. argolica. (transl. JvL)
BIEL (1998): ‘Ophrys lesbis (described as type from Lesvos) is relatively rare with 9 sites (22 reports) and each time only with a few individuals on the site. They are limited on the calcareous, fine sandy habitats in the west of Lesvos’. (transl. JvL)
But a lot of orchidologists were not amused with those names: in BAUMANN ET AL (Europe, 2006) we find Ophrys lesbis back under the name Ophrys ferrum-equinum subsp. lesbis. And you almost can’t guess my surprise when I looked at the authors: H. BAUMANN & R. LORENZ.
And here we arrive directly at the essence of the ‘problem’: is Ophrys lesbis a member of the argolica group or a member of the mammosa group and a sister of ferrum-equinum and labiosa?  If you compare the darker species of O. lesbis (in the middle) with ferrum-equinum and labiosa you maybe could think so.

But PEDERSEN/FAURHOLDT (2007) thought different: for them it is Ophrys argolica subsp. lesbis H. PEDERSEN & N. FAURHOLDT.
Also PETROU & ET AL (Greece, 2011): ‘O. argolica subsp. lesbis, a taxon of the eastern Aegean; it occurs in Lesvos, Chios, Samos and south-western Anatolia.’
And then also H&M (2014) – Manfred HENNECKE & Stefan MUNZINGER –wanted to make a point about the Ophrys argolica subspecies. It’s a pity that they always forget their camera (I never see any pictures) when they are in the – their?- field and that they also forgot to integrate Ophrys lesbis in their biospecies concept: ‘According to molecular-genetic data the subsection Argolicae belongs into the section Araniferae. Within this subsection seven species are defined: Ophrys argolica, climacis, delphinensis, elegans, icariensis, lucis and morisii; last six species are of hybridogenous origin’.
What happened with Ophrys lesbis H&M? Lost? Never saw it in the field gents? Never been on Lesvos? And what about Ophrys aegaea, also lost in biospecies space? 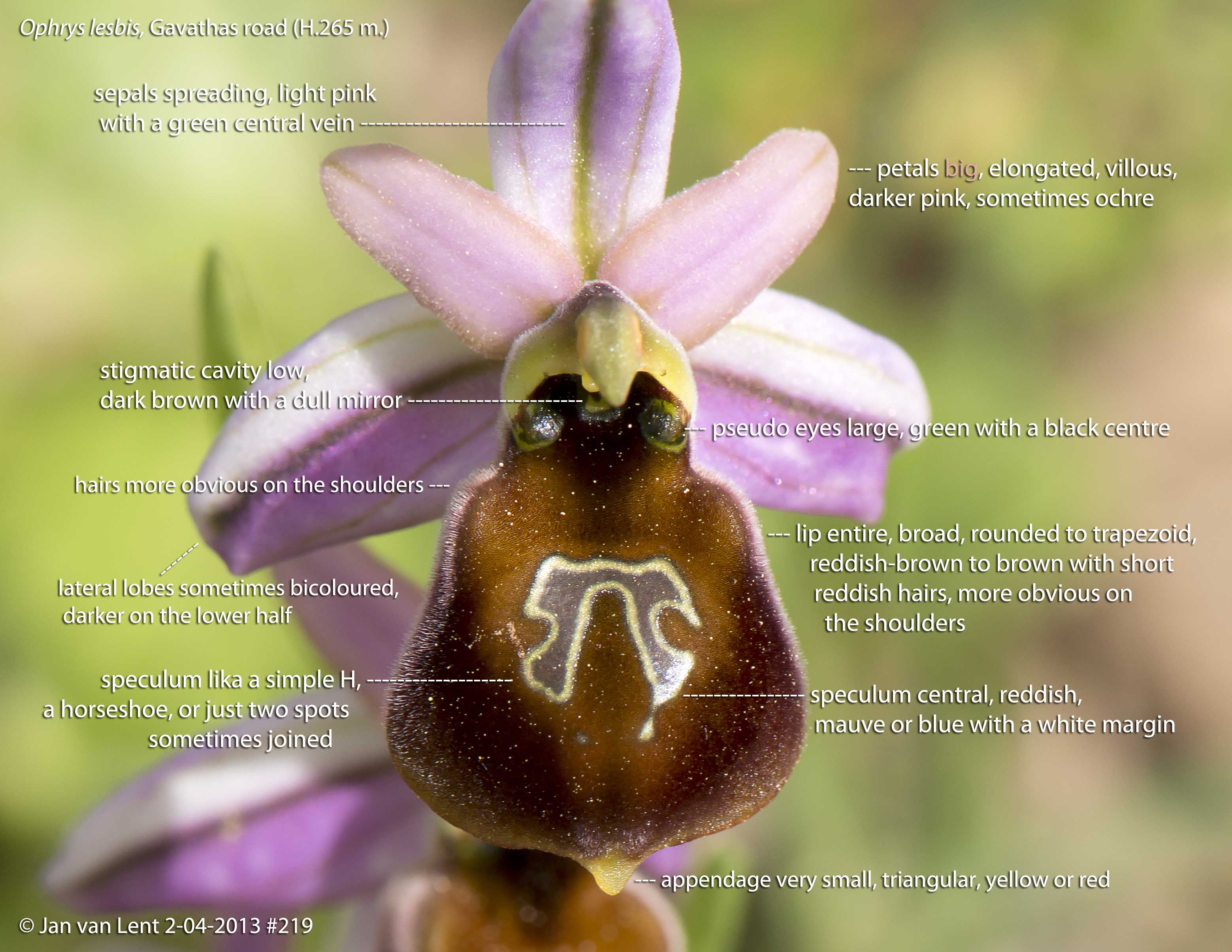 BOTTOM-LINE: Meanwhile, as far as Ophrys lesbis is concerned, nothing has changed in the last 25 years. She is still there, she doesn’t mind if we call her a species or a subspecies and if she is in the section Araniferae (likely in the sense of REICHB.F.1851) and/or in subsection Spegodes. But maybe she is afraid that we call her Ophrys lesbian instead of Ophrys lesbis. So, if you want to see her on Lesbos you have to go west – like in the old days when you wanted to visit the famous lyric poet Sappho – because that is the only place where she is (for Sappho: was) flowering. And I actually have to write still flowering because I noticed that ‘they’ are building a new asphalt highway to the west – also planned over the habitat of Ophrys lesbis on the road to Gavathas, maybe cutting the ‘famous’ Andissa corner and the road to Lapsarna. Then the only place where you still can see the Lesvos Ophrys will be in the Petrified Forest (but then you have to pay to see her…) or you will have to crawl in March through the oak forest on Mt. Fouga; the habitat where I found one Ophrys lesbis this week.