HUNTING: There are years when you can’t find her, and there are years when you can. This year (2012) you could, if you were there. Almost everywhere you looked between a thousand metres before Sanatorio and the top of Olympos, she was there. And ‘she’ is the very rare, very strange and very beautiful Komper’s Orchid. So there is hope. Because in my ‘early’ years as orchidologist I searched those forests up from Agiasos for years; in vain I have to admit. Until that day at the end of May 2009 when I stopped my car next to the road, got out, climbed just up the bank at the left and immediately saw her standing there, directly in front of me. Okay, it was an old girl, but she was still wearing her long hair with dignity. 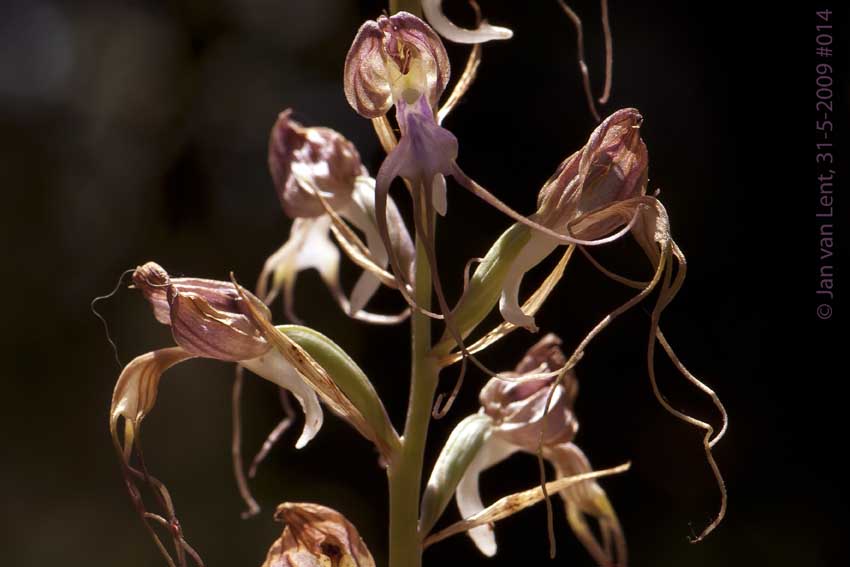 The next year I looked again on this spot but she wasn’t there anymore. A farmer, (yeah, who else) had laid a rubber waterline through this forest to water his pigs and by doing so cut a lot of trees and bushes. Frustrated I climbed down and searched the area for possible comperiana. And then, walking on the right side of the road, a few hundred meters back there she was again: standing between the bushes under a fence and in full flower. 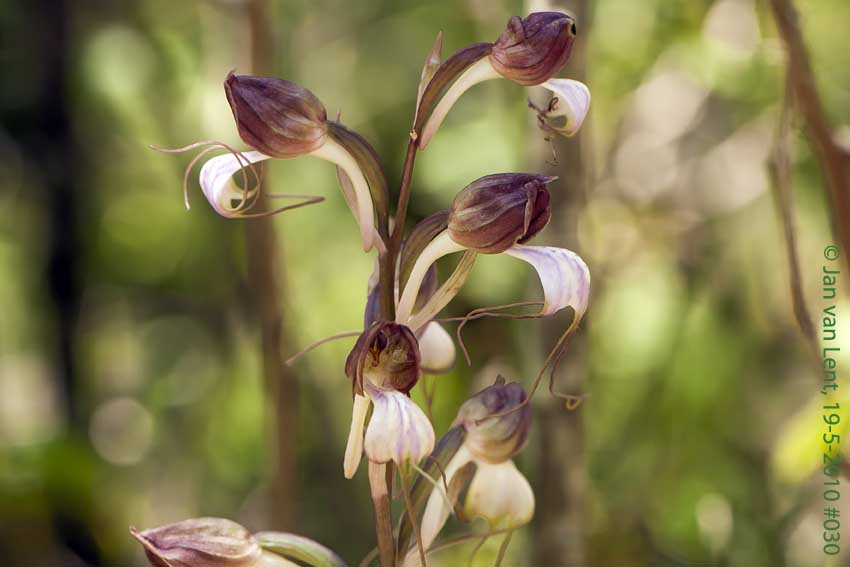 But again that was the only one that year. Last year I was luckier, or was this already the pattern of things to come? I stumbled over 3 comperiana on 3 different habitats, Megalochori, Spides and Sanatorio, all in full flower. 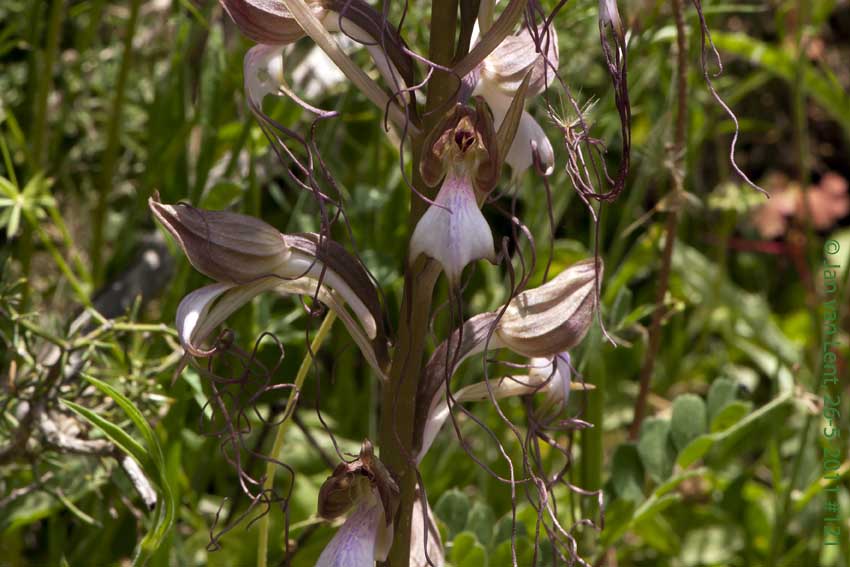 And this year I found 13 Himantoglossum comperianum or if you prefer, Comperia comperiana on 6 different habitats: on the parking place where I parked my car in 2009, (I really had to avoid a comperianum which was standing in the centre of the parking spot; when I stopped and got out of the car to look at her I saw that I had parked my car centimetres from an Ophrys reinholdii. Pfft…) When I came back to this spot (can you really call a parking place a habitat?) on the 22nd of May, she was knocked down. I tried to rescue her (put a stick in the ground and tied her up) but a week later she vanished completely. As was the Ophrys reinholdii. Fortunately one of my friends walked up to the spot where I found my first comperianum in 2009 (I told her about that first find) and there she was again, small but in full flower (#070). The other 4 habitats were: a side path of the road to Sanatorio (1); along the road between Sanatorio and ‘the corner’ (4); on the track to Olympos (4); and above Megalochori (2). 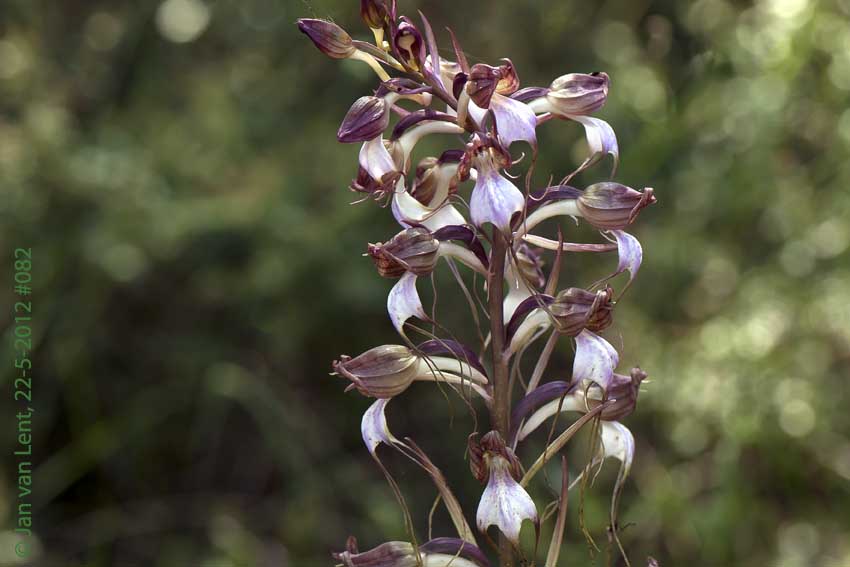 RESEARCH: Well, there is not so much to research on Himantoglossum comperianum. The naming I already mentioned. Maybe the places besides Lesvos where they should be growing are interesting to look at.
SUNDERMANN (Europe 1980): ‘This plant (Comperia comperiana) belongs to the most extreme oddities in our area: Aegean islands (Samos, Lesvos), Turkey, Crimea, Lebanon, Persia, Kurdistan and Luristan’ (Central mountain region of West-Iran).
KREUTZ (Turkey 1998): ’Regrettably in Turkey this formerly widespread species is now in great danger because of the digging up of the tubers for the making of Salep*, overgrazing, and the agricultural use of the sites. Therefore you will find the most specimens only in old graveyards. But unfortunately also there already the plants got increasingly hacked away in the last years.’
KREUTZ (Rhodes & Karpathos 2002): ‘Recent findings of Comperia comperiana (on Rhodes) have not been confirmed for the last few years now. Probably the species was able to colonize Rhodes after the reforestation had been carried out by the Italian administration. From then on Comperia comperiana had its south-western boundary in the southern Aegean region and is very rare at its habitat boundary. Comperia comperiana can therefore be classified as being extinct on Rhodes.’
KREUTZ (Cyprus 2004). No Comperia comperiana or Himantoglossum comperianum on Cyprus.
KRETZSCHMAR & Eccarius (Crete & Dodekanensis 2004): ’(Comperia comperiana) has not been observed on Rhodes with any certainty for several years.’ Nor on Crete or on Karpathos.
DELFORGE (Europe e.a. 2005): ‘(Himantoglossum comperianum) centred on Southern Anatolia: west to the Aegean (Lesvos, Samos, Kos, Rhodes), north to the Crimea, south to Lebanon and east to Iranian Kurdistan. Very local and very rare, greatly threatened in Turkey by its harvesting for salep*.’
BAUMANN/KÜNKELE/LORENZ (Europe e.a. 2006): ’(Comperia comperiana) Aegean islands (Lesvos, Rhodes), Iraq, Crimea, Turkey, Iran, Lebanon.
TAYLOR (Chios 2012): A single Himantoglossum comperianum was found on Chios in May 2009 and it appeared again in 2010, but in 2011 there was no sign of the plant anymore.
KARATZÁ (Lesvos 2008): Sanatorium Agiasos, the whole Olympus region, Megalochori and Plomari. 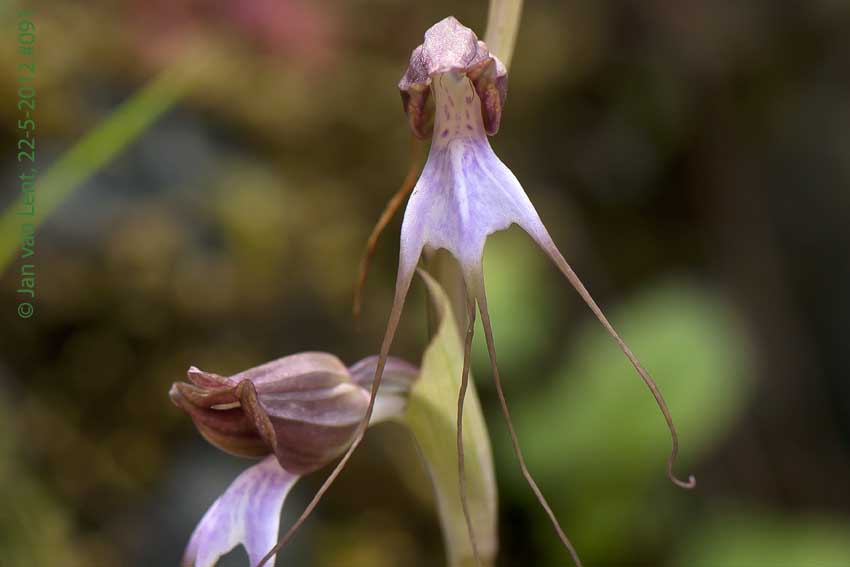 BOTTOM-LINE: It will be not easy to mix up this typical and big plant with a small Orchis, a big Ophrys or even with the other Himantoglossum on the island. Only with the special mix from ‘on the corner’, the hybrid between H. comperianum x H. montis-tauri = Comptoglossum agiasense Karatzá 2004 or Himantoglossum veraii (Manning) you have to look more carefully but no doubt you will definitely see the differences.
So comperiana are not around on the Greek mainland, nor on Crete, nor on Karpathos. She is extinct on Rhodes and Kos. But on Samos there is this year one new find, on 14-5-12. On Chios there was one found in 2009 and again in 2010, but in 2011 there was no sign of the plant anymore. So then it is even more special that you still can see ‘her’ standing there, ‘everywhere’ above Agiasos. At least this year…

* Salep or salepi: In Turkey (as it was once in parts of Europe) the making of Salep, a kind of hot ‘sharkfin soup’ made of milk, cinnamon and the tubers of orchids (hence the name: Orchis means testicles in Greek), is the most important cause of the perishing of large numbers of orchid species and even complete genera. Between 1,000 and 4,000 tubers are needed to produce 1 kg of Salep, so between 500 and 2000 orchids have to be ‘slaughtered’ for maybe 10 or 20 cups of this drink.
To my surprise, no to my bewilderment, I saw tens of salepi handcarts (old ice-cream carts) appearing in the centre of Athens last winter, mostly pushed by refugees from Afghanistan, Iraq and Iran. I hope that this will not be a new trend in the Greek crisis:
in Europe it is forbidden to dig out orchids… 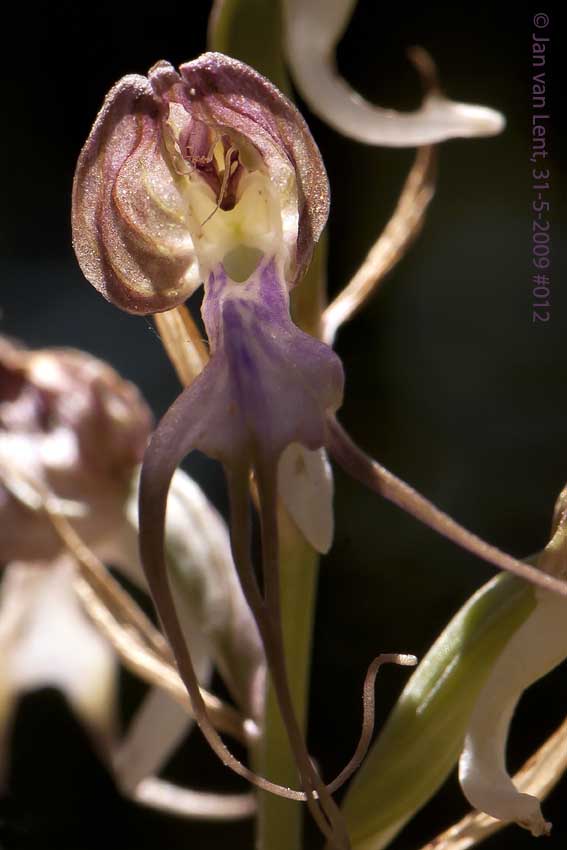 ETYMOLOGY: Himantoglossum: Himanto-: strap; -glossa: tongue.
Comperia/comperiana/comperianum: Named after Compére, a French landowner and colonist in the Crimea who collected this plant. 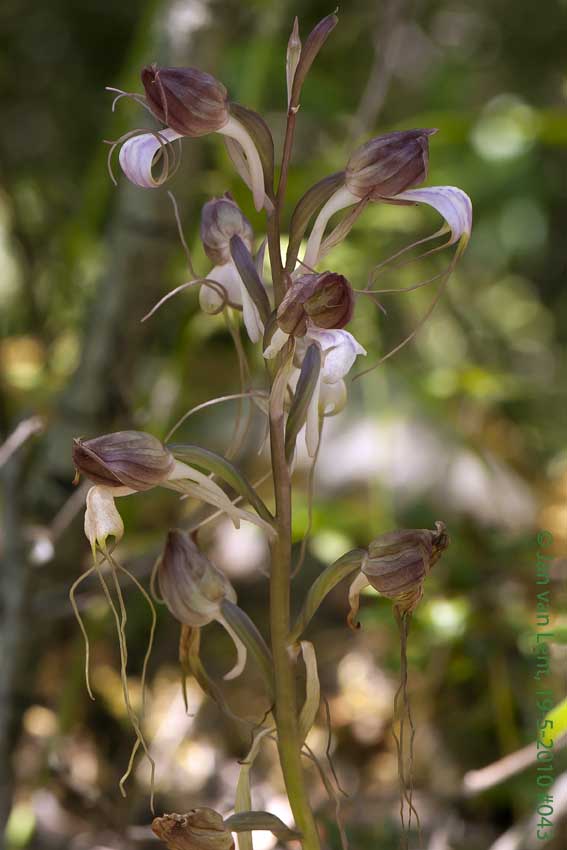 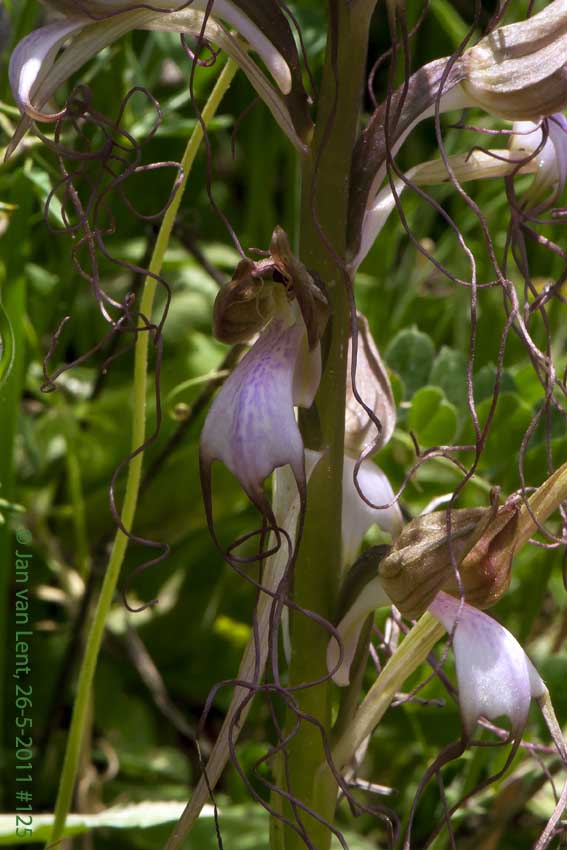 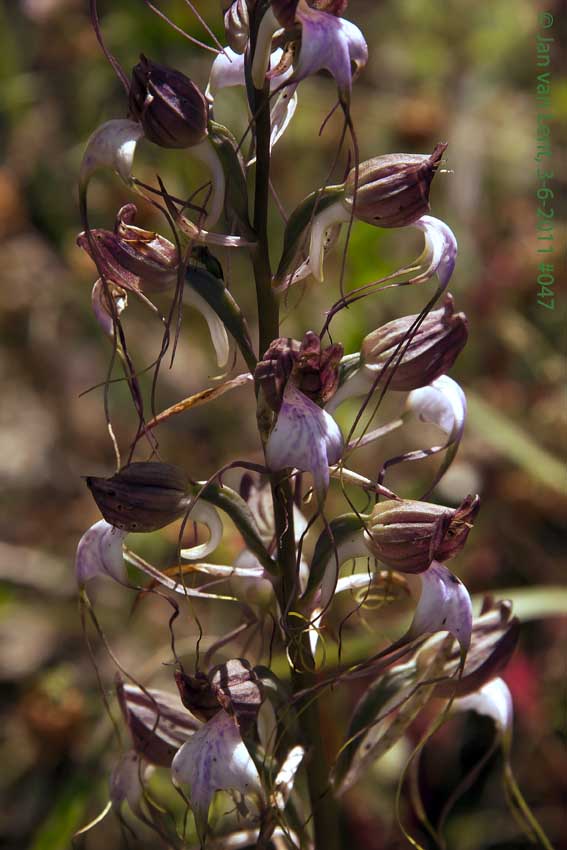 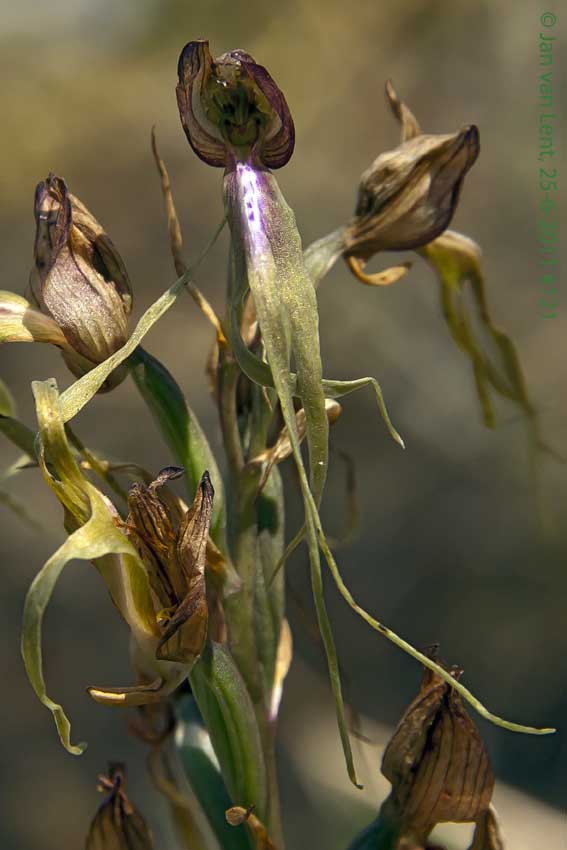 NAMES: STEVEN = Christian von Steven (1781-1863), Finnish born Russian, Ukrainian-Russian doctor, botanist and entomologist. He studied medicine in several areas including St. Petersburg and Jena and worked with MARSCHALL von BIEBERSTEIN from 1800 on. He travelled in the Caucasus, the Crimea and southern Russia and became director of the botanical gardens in Nikita (Crimea) in 1812.
Travelled to the botanical centres of central and western Europe in 1821 - 22.
(http://www.uni-goettingen.de/de/187070.html) 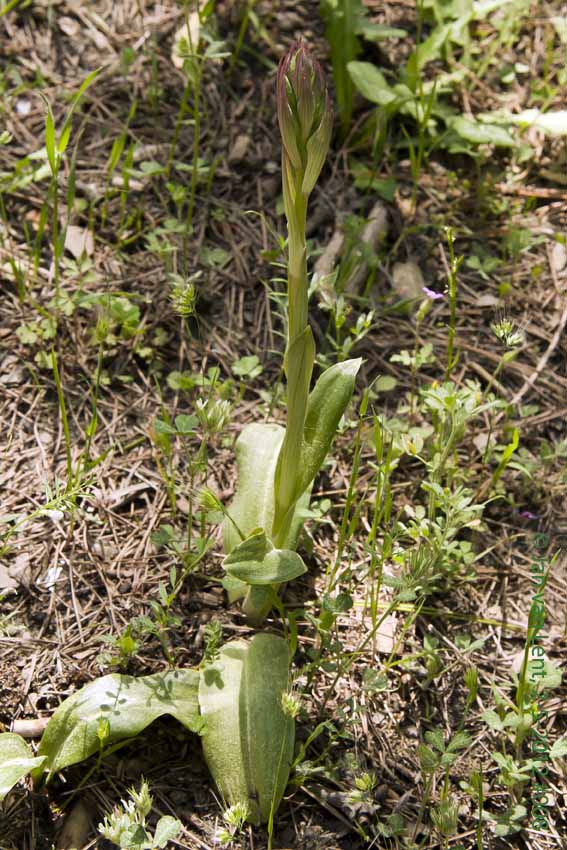 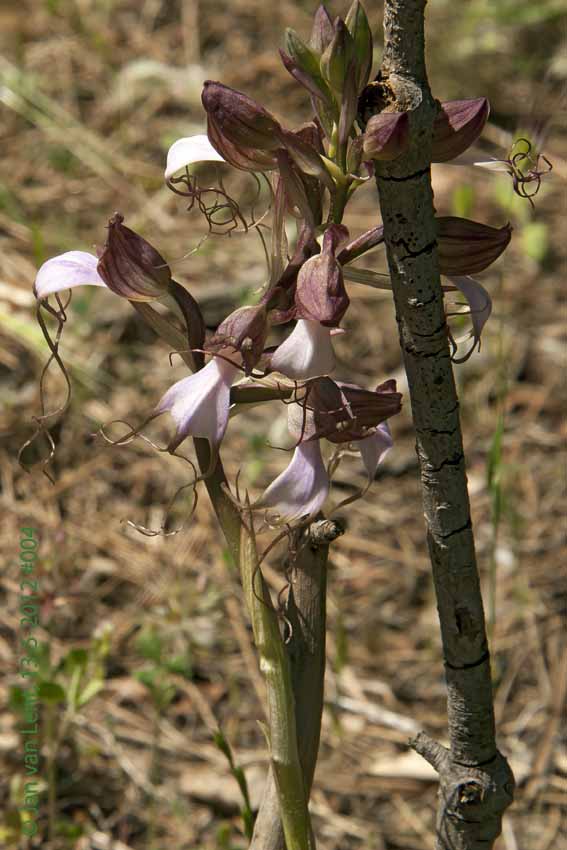 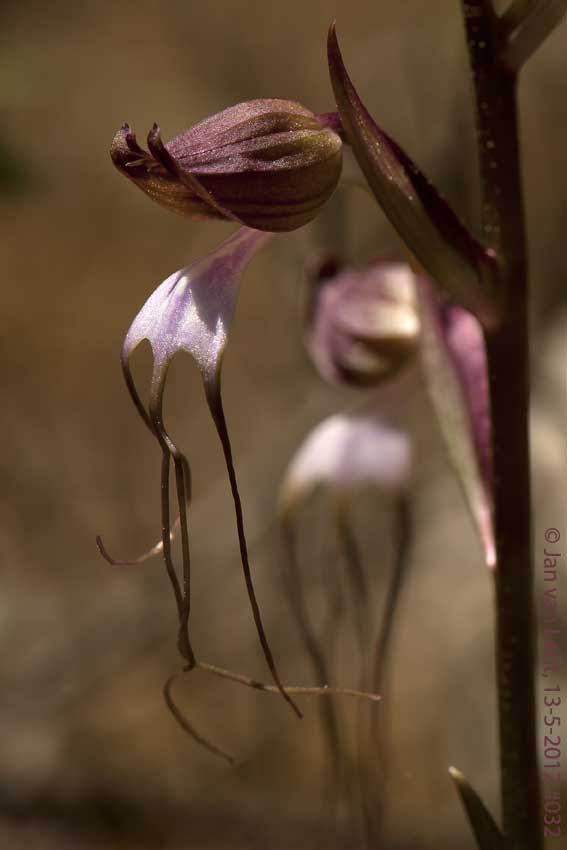 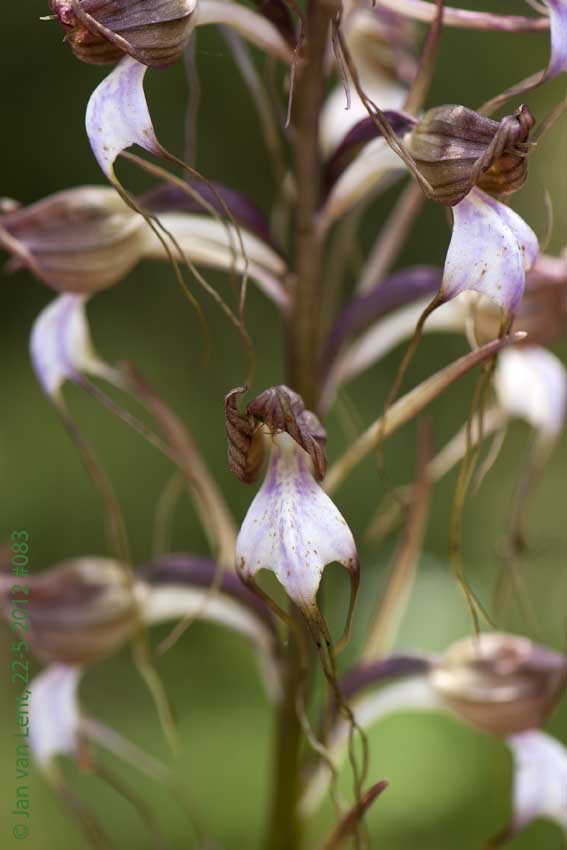