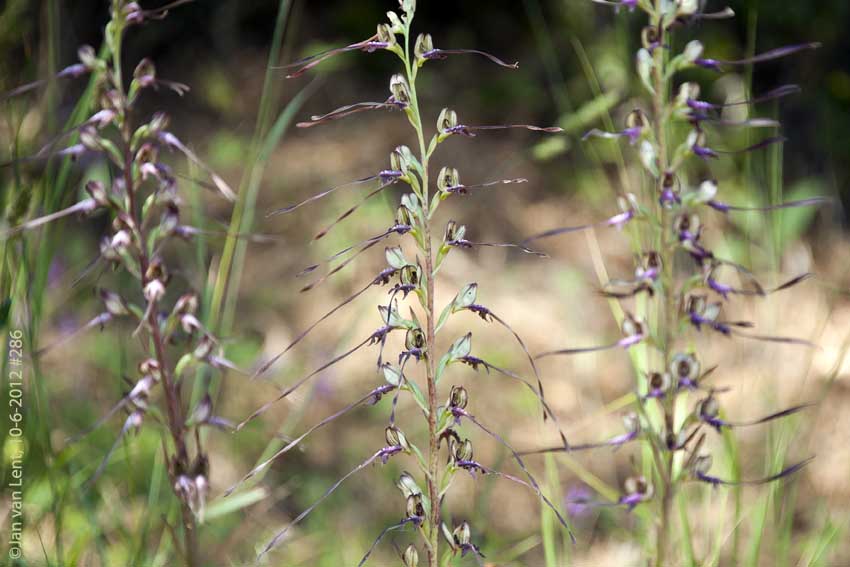 HUNTING: Hunting for the last orchid species of the year means going to very deserted places in very hot conditions. The Himantoglossum-group is especially infamous for this because they grow up from Megalochori in the mountains (630m) on a small gravel track which has, when you finally have reached it, always the burning sun straight on your head (and on the plants) and a hot wind starting to blow the lips of your Himantoglossum in all directions. After photographing those plants for 2 hours or so you are dead meat. Fortunately there are only 6 or 7 plants standing there every year in June (except this year, 2012, because I found 16 Himantoglossum on this track), unfortunately often inside the prickly blackberries and wild roses, so they are very difficult to photograph properly. Until this year this Megalochori track was also the only habitat where I found Himantoglossum. With some internet help, I have to admit. So this year was different. When I went up on the 10th of June to ‘the corner’ above Sanatorio where I hoped to see the two Comptoglossum agiasense Karatzá (or Himantoglossum veraii Manning) species which are standing there, they had been eaten by goats. It is not so special that goats eat Himantoglossum because caprinum and also hircinum means ‘(with the scent of) goat’. So I suppose goats are especially attracted to those plants. Anyway, between three small rocks I discovered here on this corner one small Himantoglossum.

Small, because normally these are big plants, reaching sometimes 80-100cm. But this one was small because the goats had eaten the complete top of it. But it was still flowering and had an unusual beautiful purple colour with dark blue accents; ‘normally’ it is more brownish-red. And this time it was not standing against a wall and not inside prickly bushes, so I took my chance. But which Himantoglossum has this colour? 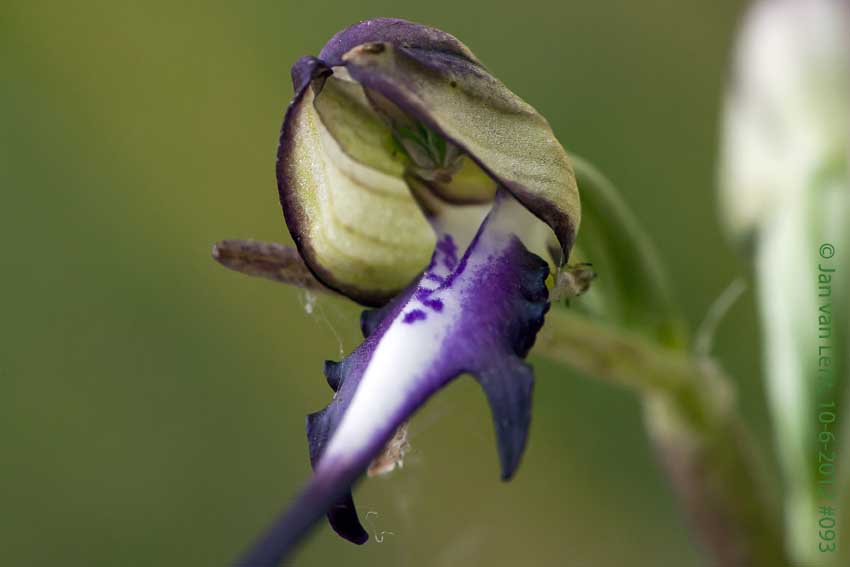 RESEARCH: In 1980 SUNDERMANN mentioned 5 different Himantoglossum in his book: H. hircinum with ssp. hircinum, ssp. caprinum, ssp. calcaratum, ssp. adriaticum, ssp. affine and Himantoglossum formosum. The last one we can forget about because if it exists then only in the eastern Caucasus and south-eastern Transcaucasia (Georgia, Armenia and Azerbaijan).
Hircinum; in Europe, but I don’t see Greece or Turkey on his countries list.
Caprinum: yes, also Greece and northern Turkey.
Calcaratum: maybe also in Turkey.
Adriaticum: No, not in Greece or Turkey.
Affine: Peloponnese, western and southern Turkey, Iraq, Syria, Lebanon, Israel, Persia.

But: ‘those 5 subspecies (of hircinum) will be judged very differently and classified mostly as species, although they are often connected to each other through transitional forms, because all important diagnostic characteristics (length of the spur, length of the side lobes, length and split of the middle lobe and the colouring of the flowers) vary strongly.’ Okay, so perhaps we have H. caprinum and H. affine on Lesvos, but also some transitional forms… The difference between H. caprinum and H. affine:

(ssp. affine) ’30-60cm high; very loose inflorescence, 10-30 flowers with a greenish white colour (with brown, but mostly without any red shade) and the plate of the lip without dots or patches; side lobes blunt triangular, very short (about 3 mm) or entirely absent; middle lobe short (20-40 cm), little turned over and at the tip barely cut (not more than 10 mm); spur 3-6 (8) mm long.’

(ssp. caprinum) ‘inflorescence (near) lax; flowers tinted red to intensive red shaded or only brownish green. Side lobes 5-20 mm, the multiple turned middle lobe 35-65 mm long, notched on the tip; with red (hairy) spots on the plate of the lip; spur 4-6 mm long.

Let’s see what KREUTZ (Turkey1998) found in Turkey: Ah, 3 different species: H. affine, H. caprinum and an H. montis-tauri. Let’s read his description of the lip of this montis-tauri: ‘Lip strongly three-lobed, slightly arched, olive green (rarely brownish green) with red papillae on the white area down from the base; middle lobe 40-70 mm long and about 20 mm split deeply, approximately 4 to 7 times as long as the two side lobes, not much turned over; the two side lobes approximately 7-10 mm long and 8 to 11 mm wide (triangular and very broad), on the edge wavy to indented), olive-green.’

Because the ‘chef’ himself (DELFORGE 2005) has already 7 species (no subspecies) in the Himantoglossum hircinum group in Europe, North Africa and the Middle East. But there is not much to choose for Lesvos, only H. affine and H. bolleanum/H. montis-tauri. H. affine: Eastern sub-Mediterranean, centred on southern Anatolia and extending from the Peloponnese to Iran; H. bolleanum = syn. for H. montis-tauri Kreutz (Southern Anatolia, Lesvos and perhaps Israel); H. caprinum only in the Balkan and Anatolia. Delforge: ‘(H. bolleanum), a controversial taxon, hybridogenous*. Probably not yet stabilised, in sympatry* with H. affine but may have almost completely absorbed H. caprinum in southern Anatolia and on Lesvos. Forms intermediate between H. affine and H. caprinum are rather frequent in northern Anatolia.’

BAUMANN/KÜNKELE/LORENZ (Europe e.a. 2006) have a very thorougly flower analysis with herbarium photographs on the genus Himantaglossum. 10 species in Europe and adjoining regions so that will include Lesvos: H. caprinum ssp. caprinum from the Balkans to the north of Turkey,  ssp. bolleanum from Lesbos and Turkey; H. affine ssp. affine from Lesvos through Turkey to Syria, Kurdistan and Iran.They also have some ‘new’ subspecies in their book but that has to do with their ego, look at their register for the authors of all those subspecies and you will find a big surprise, behind almost every subspecies: H. Baumann & R. Lorenz! Those guys are really name fetishists.

There are no members of the Himantoglossum hircinum group on Chios, Rhodes, Karpathos and Cyprus. For Crete KRETZSCHMAR & Eccarius (Crete & Dodekanensis 2004) listed a Himantoglossum samariense C.& A. Alibertis, but: ’Its status as a species is a point of controversy.’ Yeah, actually I don’t see a lot of difference with a ’normal’ H. affine.

KARATZÁ (Lesvos 2008): 3 Himantoglossum species (affine, caprinum & montis-tauri) and of course his X Comptoglossum agiasense I. Karatzas from ‘the corner’. All those species he found between Sanatorio Agiasos and Megalochori.

* KREUTZ (Die Orchideen der Turkei, 1998) writes in his Himantoglossum montis-tauri COMMENTS about the existence of H. affine and H. caprinum on Lesvos: ’Whether the Turkish plants and the hybrid forms from Lesvos have to be considered as hybrids or as evolutionary divided groups (intermediates), stays controversial in the opinion of REINHARD (briefl. Mittg., 1997). Yet in the past already such various intermediates were described as species’.

*sympatry: Species occurring in the same area or whose ranges overlap. 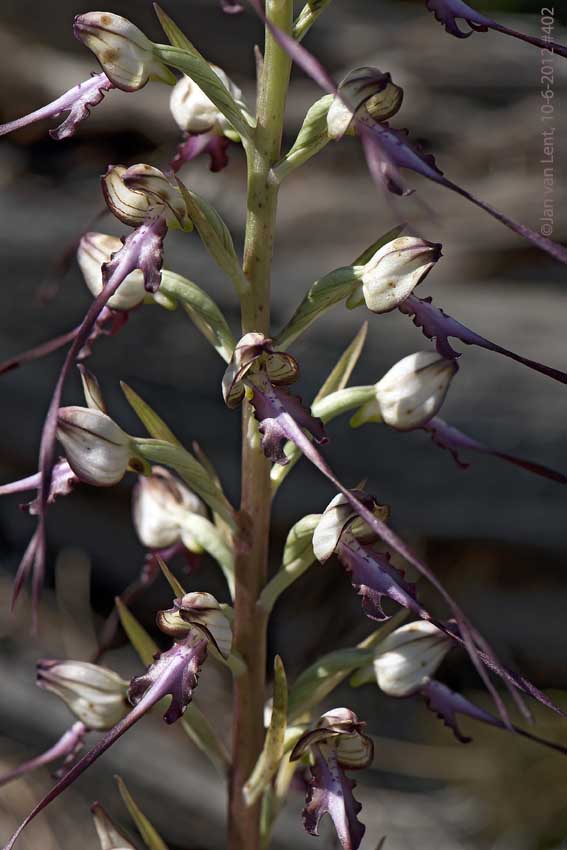 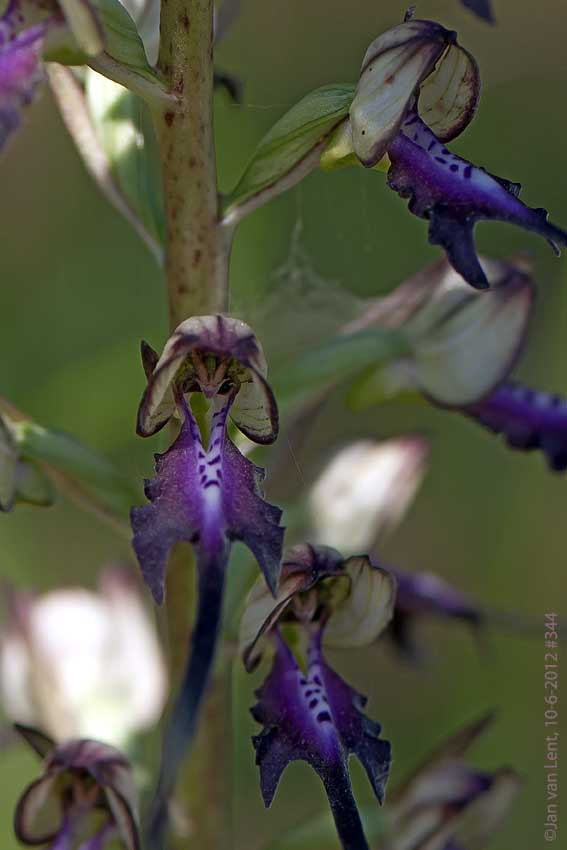 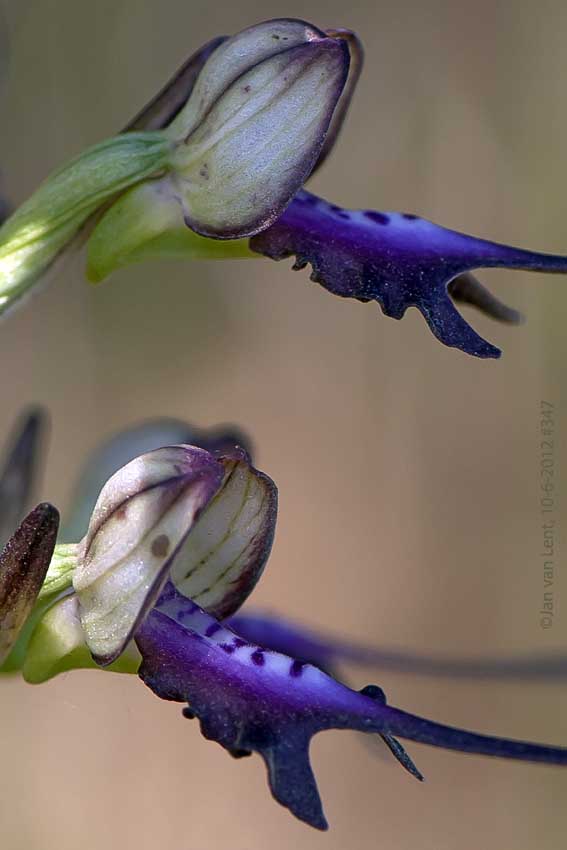 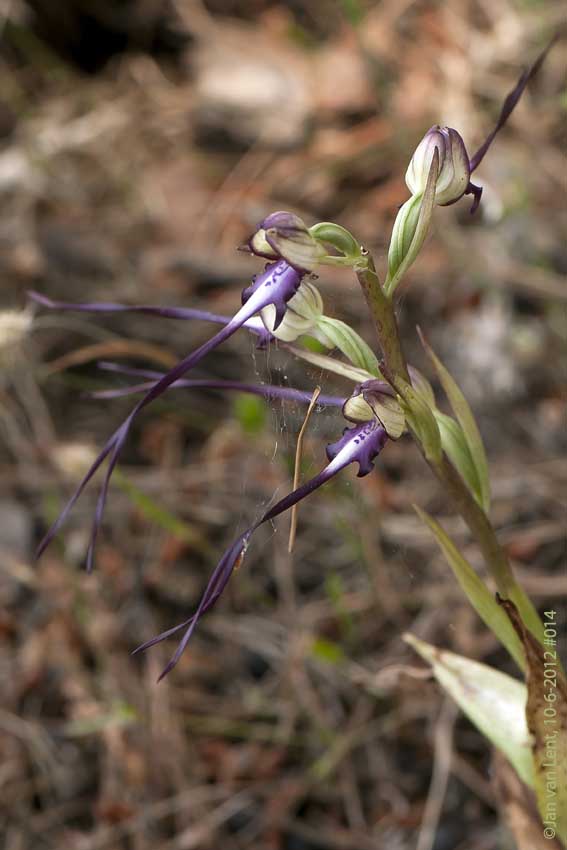 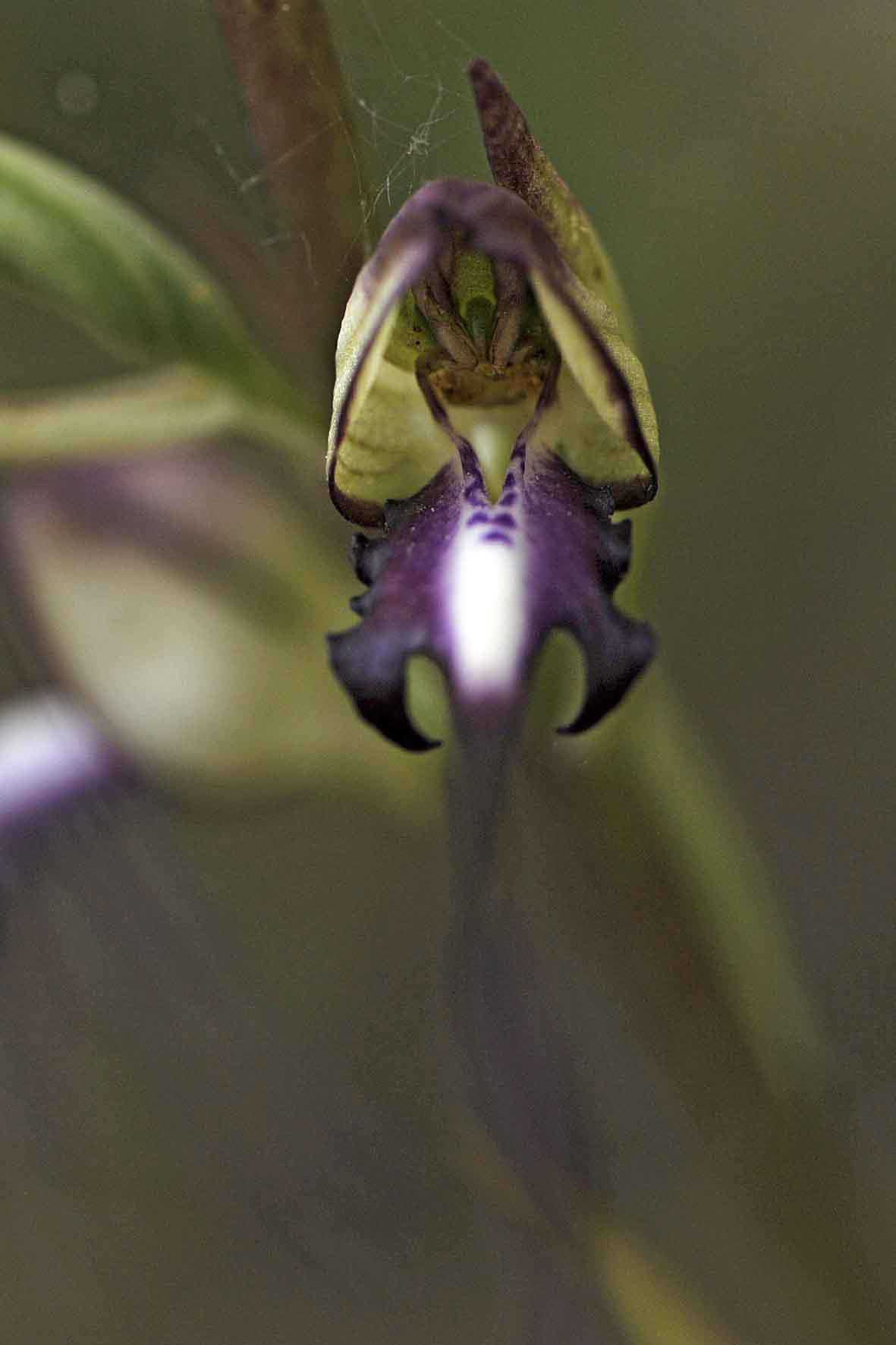 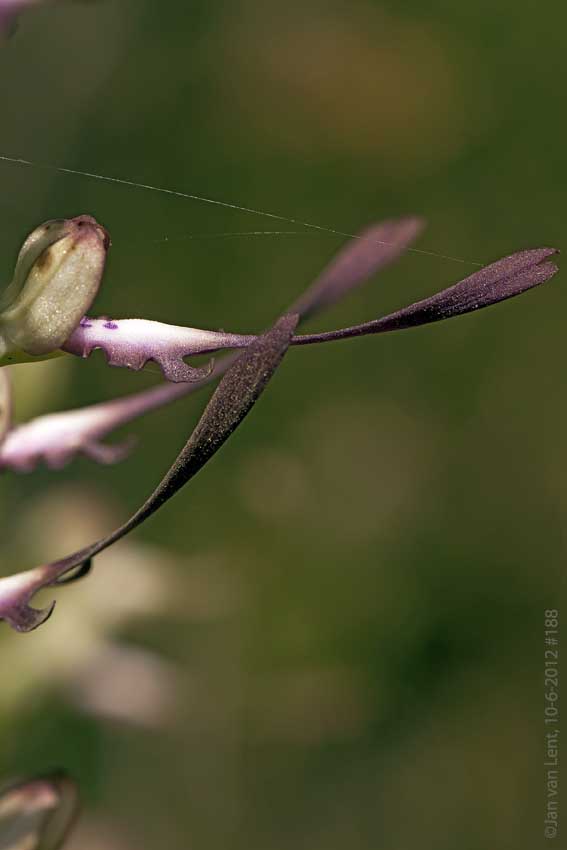 NAMES: Karl or Carl Philipp Sprengel (March 29, 1787 – April 19, 1859) was a German botanist from Schillerslage (now part of Burgdorf, Hanover). Sprengel worked under Albrecht Thaer (1752–1828) in Celle. He then worked from 1804 to 1808 with Heinrich Einhof (1778–1808) in Möglin on agricultural studies. From 1821-1828 he studied natural sciences in Göttingen, where he eventually became professor. Sprengel died in Regenwalde (Resko), Pomerania. Sprengel was the first to formulate the "theory of minimum" in agricultural chemistry, meaning that plant growth is limited by the essential nutrient at the lowest concentration. This rule, often incorrectly attributed to Justus von Liebig as Liebig's law of the minimum, was instead only popularized as a scientific concept by Liebig. (Source: Wikipedia) 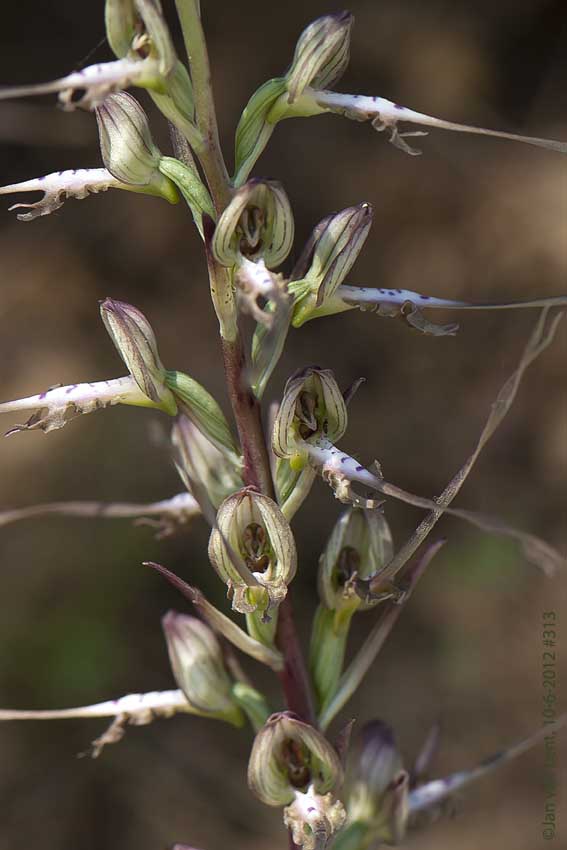 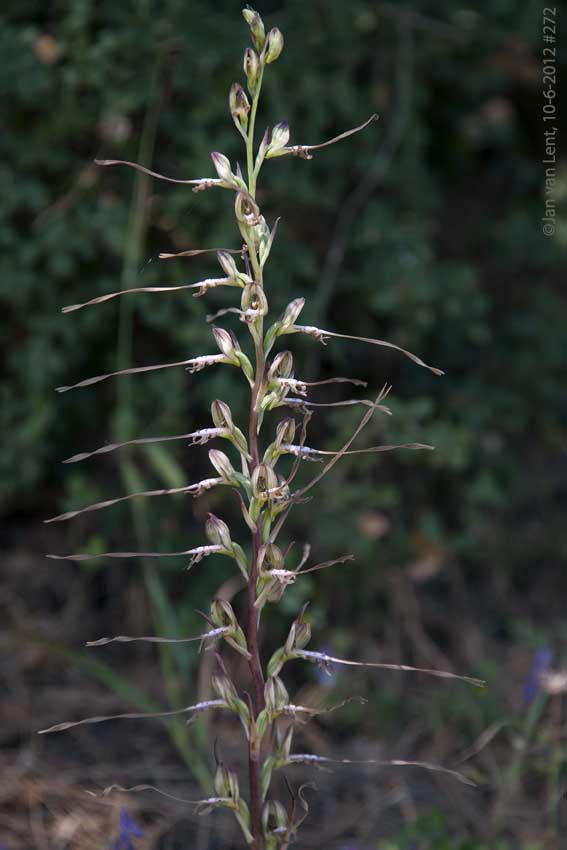 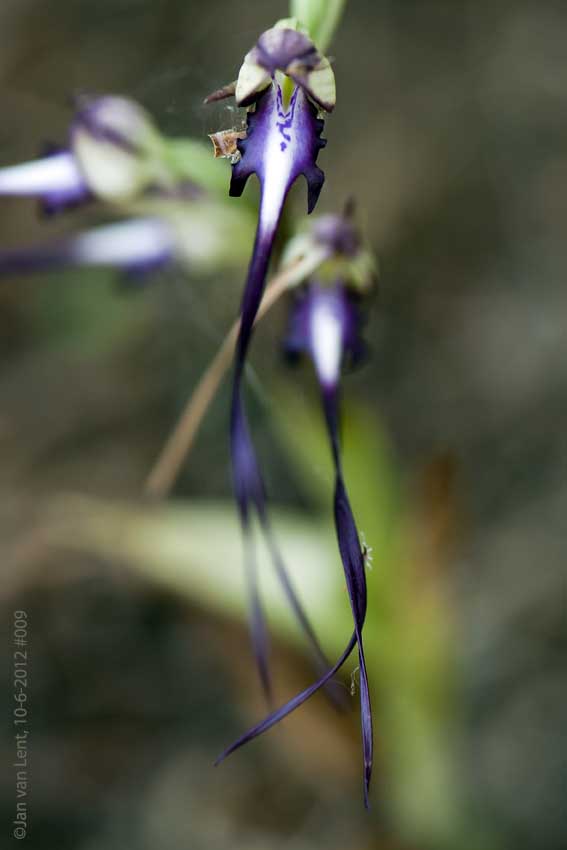 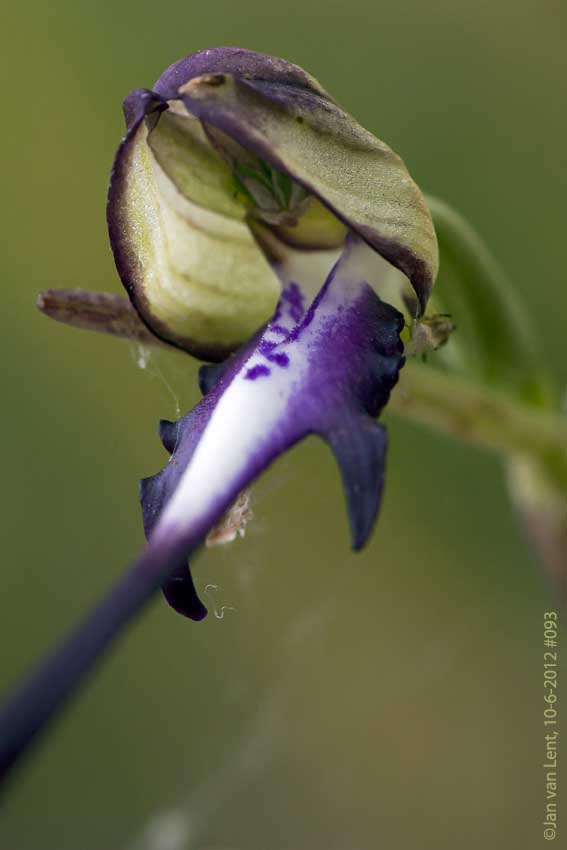 List of Hybrids of European Orchids on Günther’s site:
www.guenther-blaich.de/hybnam1.php?par=expand 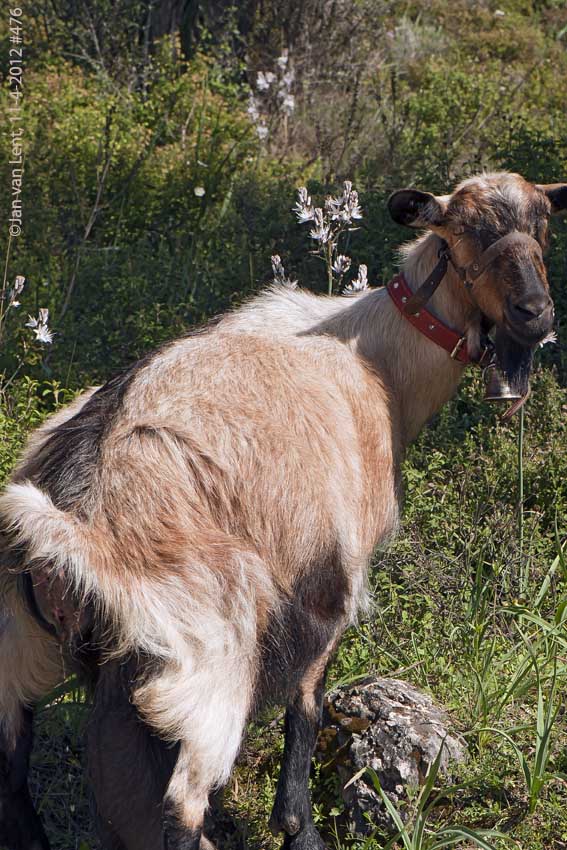