CONTINUATION from blog 30, 31 & 32: The story of an ‘ordinary’ Ophrys fusca group, somewhere next to a parking spot in a Lesvos pine forest along the ‘highway’ to Mytilini in the neighbourhood of Lambou Mili. Last week 4 plants were in flower: Ophrys sancti-isidorii 1 (2 flowers) & 4 (2 flowers) were both still flowering, plant 6 – Ophrys phaseliana – had only one flower left and the new plant 10 which I couldn’t identify yet.

Plant 6 – Ophrys phaseliana – arrived in 2013 almost two weeks later than this year, and had also two flowers. The flowers looked the same as this year but because of the rain and the water on the lip the colour was a bit more ‘golden’ brown. The form of the lip and the speculum were the same. The flowers were also more ‘damaged’ than this year, probably by its pollinator.

This week we have two new ‘guests’; plants 10 & 12 join in for the weekly fusca group meeting, welcome! Plant 12 looks to me like a real Ophrys leucadica, var. orientalis that is, and it should also be time that it finally arrived in this weekly presentation. You can read all about this (sub) species in blog 18: ‘No Money, no Honey’, Ophrys leucadica orientalis’. (http://www.janvanlent.com/blog/?p=1570)

Plant 10 had last week already one flower but was half eaten by insects. So here is the new flower of this week: Ophrys lindia H.F.Paulus 2001! Or for the devotees: Ophrys fusca subsp. lindia (H.F. PAULUS) KREUTZ 2004. Ophrys lindia? Well, yes, Ophrys (fusca subsp.) lindia. I know, I know, the experts informed us that this Ophrys is only flowering on Rhodes, Karpathos & the opposite Turkish coast but I doubt that. On a lot of habitats on Lesvos I photographed some (also early) Ophrys which, compared with ‘the books’ and the descriptions had to be Ophrys (fusca subsp.) lindia.

RESEARCH: In the SUNDERMANN days there was no such thing as ‘lindia’, and also KREUTZ (Turkey 1998) couldn’t give a name to all the different variations from Ophrys leucadica he found in Turkey.  We had to ‘wait’ 20 years before H.F.PAULUS described this Ophrys from Rhodes in 2001. PAULUS (2001): ‘At the same place (on Rhodes, JvL) grows O. lindia, also spotted elsewhere on the island and in the province of Mugla (by Kavaklidere), in south-western Turkey. It’s easily distinguished by its bright colours and the yellow border of its labellum. It flowers also definitely later than O. leucadica which is completely withered when O. lindia begins to flower.’

Already one year later KREUTZ (2002) published ‘The Orchids of Rhodes and Karpathos’ in which he remarked about Ophrys lindia (not yet Ophrys fusca subsp. lindia…): ‘Ophrys lindia immediately stands out due to the light hue of its labellum with a wide, light yellow or brown-yellow border. This distinguishes it clearly from the earlier flowering, otherwise similar Ophrys leucadica, of which the border is mostly narrower. Solitary plants of Ophrys lindia however usually have a darker hue, but can be classified by the wide shape of the labellum with its absent or very slight geniculation. The speculum marking is variable, as in all Ophrys fusca-forms. Most plants at the ‘locus classicus’* have a light blue, shiny speculum, without a distinct, coloured border at the front margin of the labellum. The speculum of the solitary plants can have almost light gray or brownish spots. In those cases, the apical margin is always brighter to whitish. In comparison to Ophrys leucadica, the speculum of Ophrys lindia usually stops abruptly and evenly at the base of the labellum, while that of O.leucadica spreads further gradually. In their flowering periods, leucadica and lindia are variously separated from each other. While leucadica certainly already starts flowering from early March and mostly reaches the end of its flowering period during late March on Rhodes, Ophrys lindia does not start flowering until late March.’ 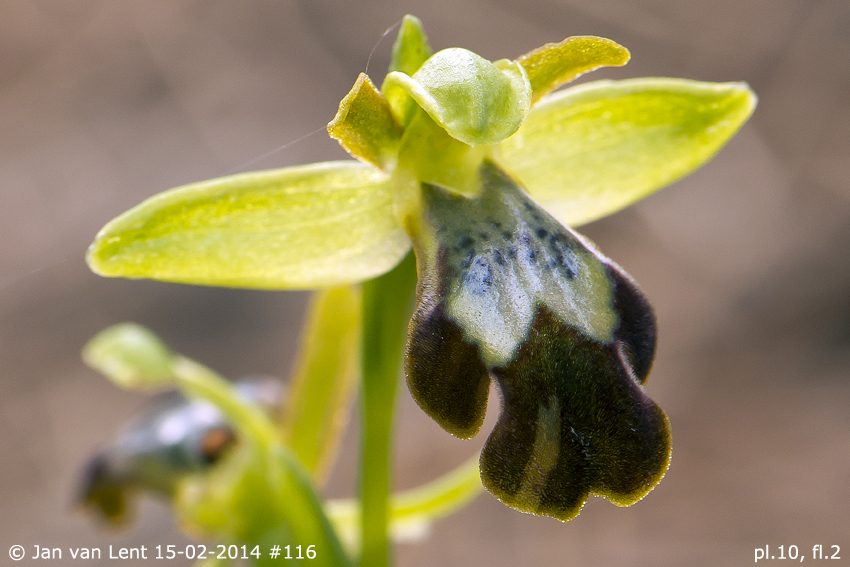 There we go, from now on ‘everybody’ will copy that the flowering periods are different without really checking that on the Aegean islands…

Also KRETZSCHMAR ET AL (2004) had already heard from this newly described Ophrys lindia from Rhodes, but in their book Orchids Crete & Dodecanese (so including Rhodes, JvL) there is no such thing as an Ophrys lindia. ‘Local Taxa have also been differentiated on Rhodes, and have been newly described in the species range by PAULUS (2001). (…) The formation of diverse, locally homogeneous small taxa by means of cluster-building thus receives the maximum encouragement. It does not seem to serve any purpose to list these small Taxa, of which there are more on the island, as species. They are retained as synonymous forms, even if special relations with pollinators might have been developed. It is exactly this plethora of new, local sightings which makes their importance increasingly questionable where the differentiation of species is concerned and a coincidental, local relationship more probable.’

So almost right! Only the the form of the lip: ‘oboval to near rhomboidal-rounded, 9-12.5mm x 7.5-10mm (when spread), slightly convex both transversally and longitudinally’ is different, ‘my’ O. lindia is slightly bigger and slimmer.

ANTONOPOULOS (2009) Ophrys lindia: ‘An Ophrys under dispute, considered by some as a separate species and by others simply as a variety of leucadica or attaviria. It is distinguished from Ophrys leucadica with its lighter brown colouring on the lip, larger yellow border and later flowering period. (mid March – Mid April.)’

PETROU ET AL (2011) Ophrys fusca subsp. lindia: ‘Flowering-habitat: Late March-April, in pinewoods, abandoned cultivation, phrygana, maquis, up to 400 metres. A very rare taxon with localised populations. Possible confusion: Individuals are quite variable. It may be confused with O. fusca subsp. leucadica, which, however, reaches higher altitudes, has a darker lip, with narrower yellow border, and its speculum is bisected by a deep groove. Some authors consider this taxon just a variation of O. fusca subsp. leucadica.’

Also KARATZÁS ET AL (2008-2009?) found Ophrys lindia on Lesvos: on the south-east coast between Thermí, Moria & Koústeri, at the Gulf of Gera near Loutrá and Pigí, and in the south around Plomari and Paliochóri. But in their 2 photographs of this species I hardly can recognize ‘my’ Ophrys lindia. 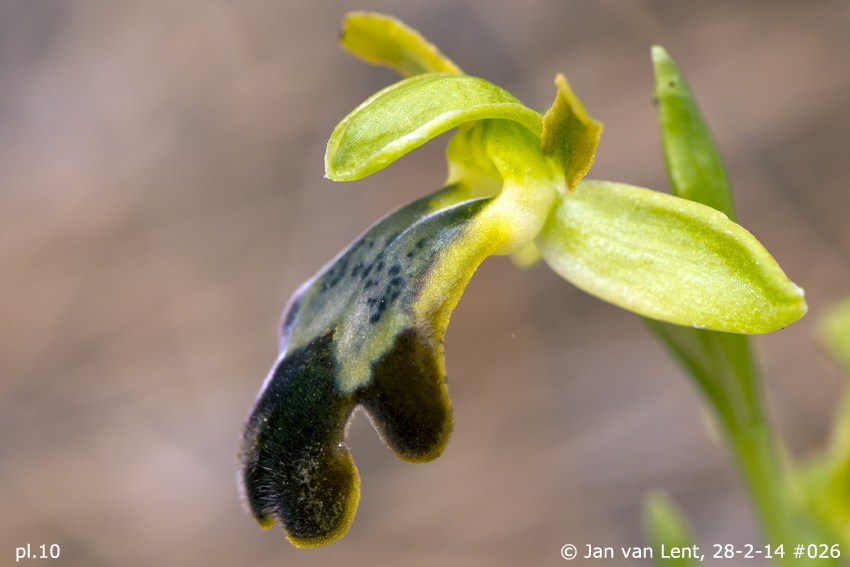 BOTTOM-LINE: And that is the sad story of this Ophrys; if I compare my photographs with almost all published (the books & internet) photographs of Ophrys lindia then there is not one that looks the same, and sometimes not even nearly the same. So, either ‘my’ lindia is not Ophrys lindia or ‘my’ leucadica is not Ophrys leucadica but then, what else? I really don’t want to describe another ‘new’ fusca subspecies. So Ophrys lindia it will be for today…
And all those ‘stories’ about Ophrys lindia flowering late and Ophrys leucadica var. orientalis flowering early is a) because nobody visited the eastern Aegean islands early enough to check this out, or b) ‘they’ didn’t know where to look, and c) ‘they’ just rewrite what the ‘experts’ wrote, without really checking on it.

Still 5 rosettes to go! Will they also have been consumed by insects or animals, kicked down by pissing human beings or covered up by rubbish? Or will they survive all those disasters? That we will find out in the next episode of ‘sooner or later’…

* ‘Locus classicus’: The specific or original site (or example) of (in this case) an orchid.