REMARKS: Last week, when I started this blog I wrote: ‘Yesterday I once again found a few autumn orchids in the pinewoods of Achladeri, and I was relieved’. Relieved because I was afraid that there would be no Spiranthes spiralis around on Lesvos this year because of the drought. Since the first days of June there wasn’t (for almost 5 months) any rain of significance. This was the same in 2012 but then in 2 days of torrential rains in October that autumn was back on the rails and so was the autumn orchid. But two years ago (2011) we had a terrible dry autumn, so no mushrooms, almost no autumn colours and no Autumn Lady’s Tresses (beautiful name in English by the way), at least not at the habitats I was checking.

Therefore again this year, still without any rain of significance until today, the 5th of November, I decided last week to have a look at Klapados and Achladeri anyway in spite of the drought. Well in short, no, nothing at Klapados and yes, I found some at Achladeri but because I was accompanied by the ‘knitting bees’ I didn’t have the time (and the equipment) to properly photograph this very tiny – and to make it a little more difficult – also pure white orchid in a dark pine forest. I also had the impression that the ladies weren’t exactly impressed by the size of my Autumn Lady Tresses.
Indeed, if you imagine this small orchid (6-40cm) to be as big as for instance H. robertianum (100-120cm; see blog 5: ‘The big and the beautiful’ & 7: ‘Lost in wonderland’), it would certainly be more impressive! So I decided to come back a few days later.
And I did. Normally I have to drive deep into the Pine forest, through creeks and rivers, to arrive at the spot where Spiranthes spiralis were growing by the dozen. While photographing these orchids I am often watched by some soldiers, because around the corner, 50 meters further on and not visible from this spot, there is a military camp. All orchid researchers and photographers on Lesvos: be careful not to go around the corner with your eyes fixed on the forest looking for Autumn Lady Tresses and not on the road like I did once…
But not on this beautiful, clear and sunny day: I looked to the left and to the right in order to turn into the forest and what did I see? Hundreds of spiralis! All previous years there were no spiralis on this corner between the asphalt road and the forest track! I decided to drive on for a while to see if there were more and indeed: there were maybe thousands of Autumn Lady Tresses in this Achladeri Pine forest, even though for months there had been no rain… What a perfect day for an orchidologist! 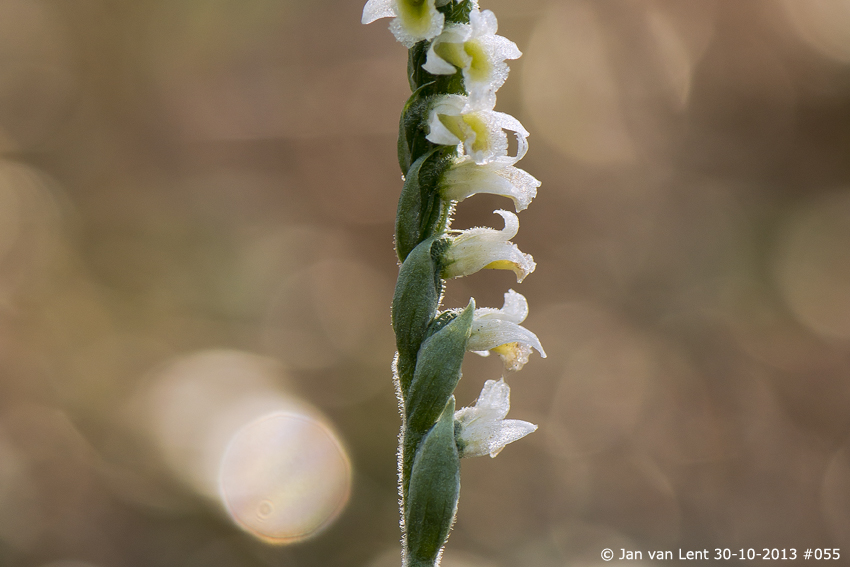 HABITAT: I still remember the first day that I finally found my first Spiranthes spiralis. I was walking with naturalist and dragonfly expert Lopi (Wolfgang Lopau 1938-2009) in the beginning of October 2008 to the Klapados waterfall, which I couldn’t find because it is really very well hidden in this forest. But Lopi of course knew the way and when he nonchalantly pointed to the side of the very small path: ‘Oh by the way Jan, you’re almost standing on your Autumn orchid’ I saw it. And it was also that day that I discovered how difficult it is to make good photographs of this very small, white orchid. The nicely smelling flowers are only a few mm in size, and to smell their pleasant aroma you have to lay with your nose on the ground almost into the flower. And you also have to do this with your big, heavy camera if you want a close-up of those tiny flowers which looks as they are covered in white frost. 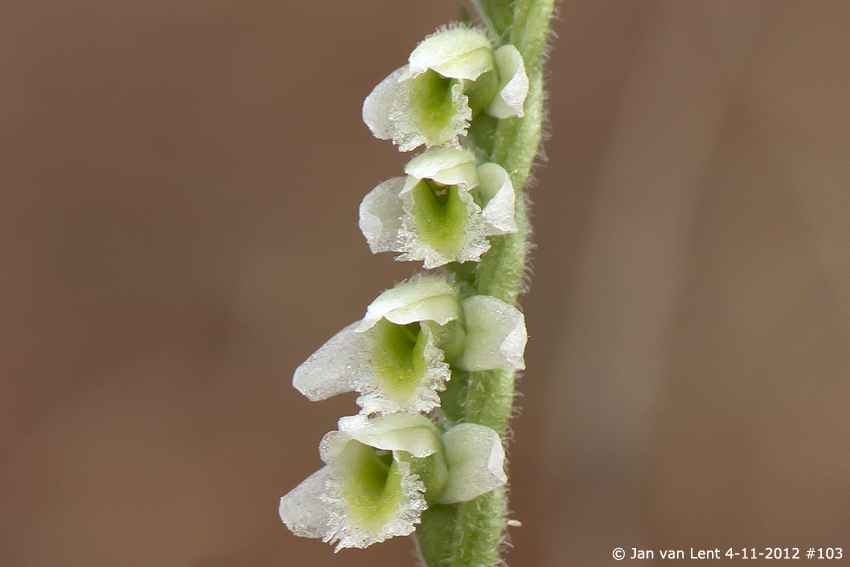 RESEARCH: Spiranthes spiralis is not a particularly popular orchid on Lesvos because it flowers when all West-European orchidologists are back to their writing desks or to the Spiranthes in their own country. Because the autumn orchid flowers almost everywhere in Europe in autumn, and its very rare sister Spiranthes aestivalis flowers in summer from the Pas-de-Calais down to the Mediterranean. There are two more Spiranthes in the world: the pink Spiranthes sinensis in Asia, Australia and New Zealand and Spiranthes romanzoffiana in the USA, although there are records that this last species also flowers in the western parts of Ireland, Scotland and England. And in the ‘mapping’ records or ‘finding places’ of the ‘Big Biel’ (1998) he and the other orchid researchers only mentioned the rosettes in spring (because the rosette for next year Spiranthes is already developing directly besides the flowering plant and hibernates into spring, the current rosette is already withered), except Hansen & Nielsen who saw the ‘real thing’ on the 10th of October in 1990 SW of Milies. So that was maybe the first time that a foreign orchid researcher saw the flowers on Lesvos since C.A. Cardargy described Spiranthes spiralis (sub. nom. Spiranthes autumnalis) a hundred years earlier, in 1889. 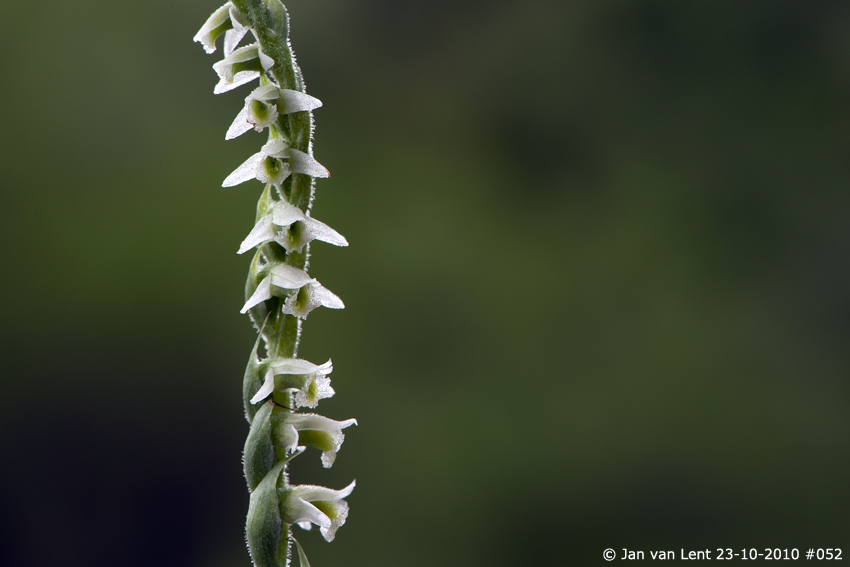 BOTTOM-LINE: There is no discussion among orchidologists about the name of the autumn orchid and its author; almost everybody agreed on Spiranthes spiralis (L.) by CHEVALLIER 1827 (Fl. Gén. Env. Paris 2:330, 1827), except DELFORGE (2005) and TAYLOR (2012); they go for 1753 as the described year. But the French doctor and botanist Francois Fulgis CHEVALLIER was born in 1796 and died in 1840, so it is hardly believable that he described this plant near Strasbourgin 1753. Maybe his father did… Anyway, in 1753 LINNAEUS described this plant as Ophrys spiralis so swapping those dates is understandable.