HABITAT: Every year between the 15th of May and the 1st of July I go a few times to church. In fact I visit a rather special chapel, i Panagia Amalí (The Holy Mary of Amalí). This chapel is situated high on a mountain above the airport of Mytilini in the south-east part of Lesvos and the old pine forest surrounding this chapel has my special interest because in this habitat a lot of Epipactis (or in English ‘Helleborine’) are growing. And, as is the case with all Epipactis in Europe, they are very difficult to distinguish from another. In 2009 I went up three times, in 2010 four times and in 2011 three times: I made hundreds of photographs and carefully studied my books. And then I let them slip (or sleep) away into my hard disks. Because I really couldn’t tell what was the difference between them. Or yes, I could tell the difference but that didn’t match the description and the photographs of ‘the’ books. But this time I am determined to do the job…

HUNTING: Today I came in from Ag. Georgios, meaning that I took the track up the mountain to Amalí from the south and when I came up in the pine forest I saw on the left, high up the steep bank, first a withered Epipactis (turcica?) and then a blooming one with beautiful reddish-purple flowers. Driving on and around the corner, almost in sight of the Chapel, there is a river (well, actually a small stream in winter and early spring, in summer it is completely dry) and from there I walked half an hour along this riverbed (and taking photographs of the Epipactis which were flowering): then I walked back to the side and behind the chapel into the woods. Again, after half an hour I crossed the road and went into the woods on the other side. Walking back in the direction of the church, I turned off to the left and searched for one hour. All together I spotted today 19 Epipactis species, some were already withered but on 8 beautiful flowering species I spent a long time and a lot of photographs. But again there is this main question: which is which?

In 1980 E. turcica and E. densifolia didn’t exist yet. E. turcica came in from Turkey with Kreutz in 1997, E. densifolia in 2003 with W. Hahn, J. Passin & R. Wegener, also from Turkey. And when they are around in Turkey (Anatolia) they can also be around on Lesvos, like both taxa do on our neighbouring island Chios (DELFORGE & SALIARIS 2007, TAYLOR 2012).

There are no Epipactis taxa found (yet) on Rhodes & Karpathos (KREUTZ 2002): ‘Astounding and surprising is the complete absence of species of the genera Epipactis and Platanthera on both islands’). But strangely enough, two other taxa, E. microphylla & E. cretica are growing on Crete. No Epipactis taxa were found on the other Dodecanese islands. (KRETZSCHMAR 2004).

And are they around on the two Aegean islands between Chios and Rhodes; Samos and Ikaria? There is not much Orchid information from Ikaria as far as I know; only S. & K. Hertel did research on Ikaria (and on Samos, Chios & Lesvos) in 2005. But they didn’t find Epipactis taxa on Ikaria (or on the other three islands) because they were visiting those islands in March and April. And even on Lesvos there are no Epipactis around in April…

On Samos DELFORGE found in 2008 E. densifolia: ‘very local, usually identified to E. helleborine or E. atrorubens before 2003’. Delforge didn’t find E. turcica on Samos (like Reinhold Emmrich did in 1981). Further down in the Mediterranean on Cyprus KREUTZ (2004) found E.condensata, microphylla, troodi & veratrifolia.

And in Turkey (KREUTZ 1998) they have of course the most Epipactis taxa (because it is so big, it has so many steep ravines, deep rivers and high mountains): E.bithynica, E.condensata, microphylla, helleborine, turcica, palustris, persica, pontica & veratrifolia.

But Lesvos doesn’t do so badly either; we have also rivers (not so deep) and mountains (no so high). Therefore Lesvos has 4 Epipactis taxa according to KARATZA (2008):E. turcica (Amalí, Olymbos, Megalochori), E. helleborine (Amalí, Krátigos, Olymbos, Megalochori), E. densifolia (Amali), and E. microphylla (Olymbos, Megalochori). Spyridon Tsiftsis found also Epipactis persica on Lesvos on 20-6-2010. Manning: ‘The very beautiful Persian helleborine is known to grow very rarely and locally over a substantial area from Anatolia to the Himalayas. However, this is the first confirmed site in Greece (let alone Lesvos) and may represent the only site for Western Europe’.

BOTTOM-LINE: 5 Epipactis taxa on Lesvos, of which E. turcica, E. helleborine and E. densifolia are said to flower on Amalí: 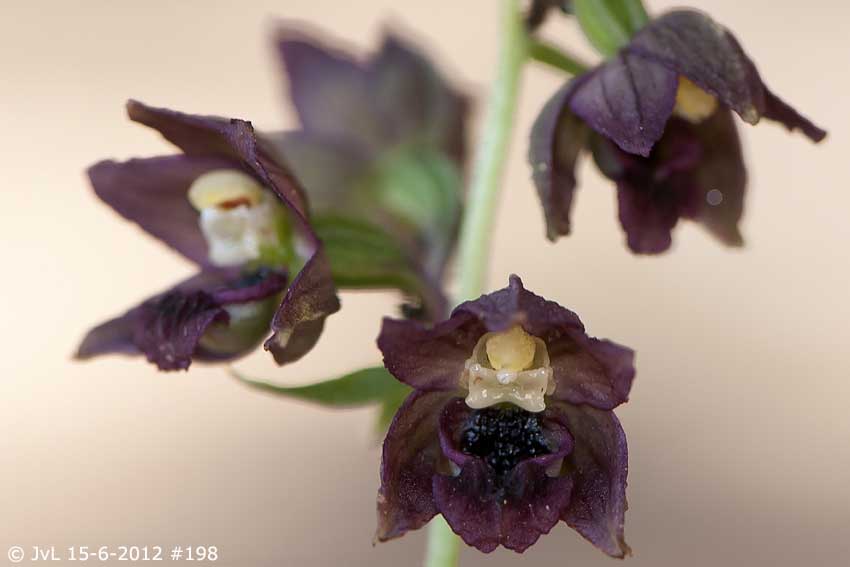 If E. turcica is the first to flower on Amalí (mid-May), the dark reddish-brown to dark purplish flowers (actually almost the same colour as Epipactis atrorubens) and, by the 15th of June almost withered flowers, should be E.turcica. It has smaller, more upward pointing leaves with undulate (but not as strong as E.densifolia) margins. The elongated inflorescence is near lax and near one-sided. 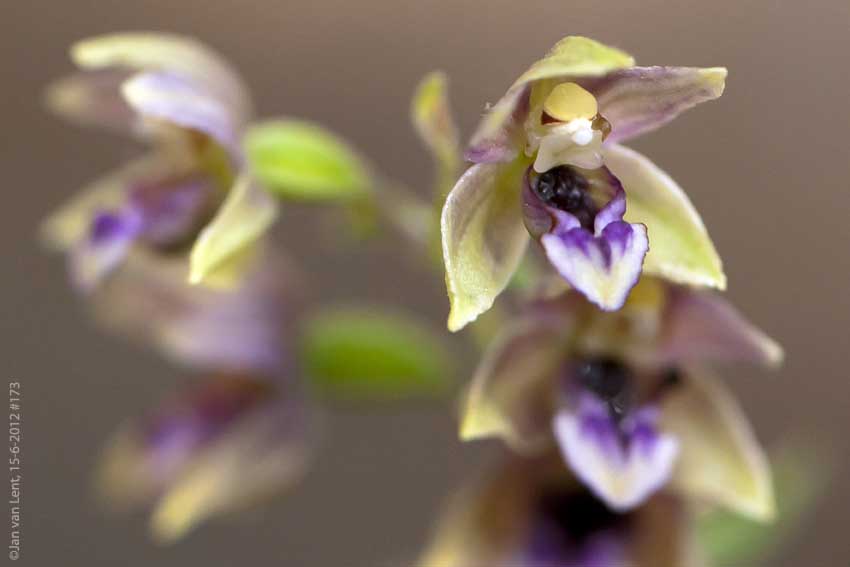 E.helleborine, the last to flower on Amalí (it flowers in some years 2-3 weeks after E.turcica), has bigger circular shaped and more spirally arranged leaves with almost straight (not undulate) margins, the flowers are more greenish, although the sepals and petals are often infused with red or purple. In my opinion the bosses at the epichile (front part of the lip) are less pronounced than on E.densifolia and the flowers look less rhomboidal (squarish) than E.turcica.