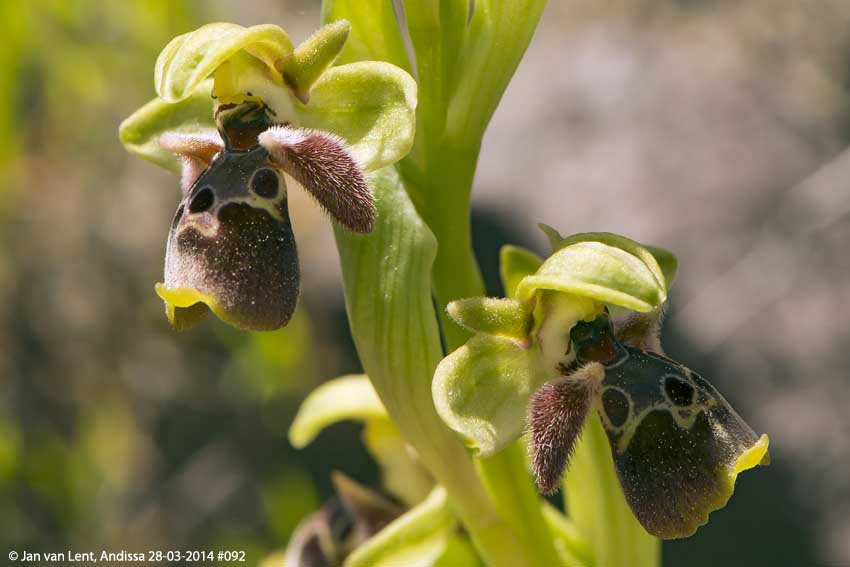 REMARKS: Ophrys bucephala was described for the first time by GÖLZ & REINHARD in 1989, on Lesvos, as the big brother of Ophrys umbilicata. They described ‘bucephala’ in 5 different habitats on Lesvos; Sigri (29-3-1988), Andissa (6-4-1988), Ambeliko (7-4-1978), Megalochori (7/10-4-1988) & Plomari (3-4-1978 & 2-4-1988). They based themselves on ‘PP & HR’ (in PG & HR 1981) sub.nom. O.carmeli ‘grossblütig’. Which means in an understandable human language: The authors themselves, Peter Gölz & Hans Reinhard, had already described a large flowered Ophrys carmeli in 1981- Ophrys carmeli was the old generic name of all members of the umbilicata-group – until that time only the small flowering Ophrys umbilicata. Ophrys bucephala had – compared to Ophrys umbilicata in their description – a bigger flower, a narrower and also narrower pointed lip, a relative small, shallow stigmatic cavity, a whitish-green perianth, more flowers, the middle lobe was almost globular, and had a red base, with green eyes with a black centre.

HUNTING: But the only habitat where I found in recent years a supposedly ‘real’ Ophrys bucephala was at the Andissa corner on the road to Sigri/Eressos. This corner is important because here Ophrys lesbis is flowering together with O. fusca var. lindia, O. sicula, O. bucephala and later on a few varieties of the oestrifera-family & Orchis collina & sancta – despite the nearby farmer who burns this habitat every winter for his goats & sheep so they have something to eat in spring, when the orchids are there… Other orchid researchers who visited this Andissa habitat were never sure whether it was O. bucephala or O. umbilicata which was flowering here; there were ‘umbilicata’s’ with pink & green sepals & petals around. But when I visited this habitat earlier this year at the end of March there was another ‘strange brew’ to be seen: Ophrys umbilicata subsp. latilabris (the wide lipped Naval Orchid) of B. & H. BAUMANN with ‘wider sepals, a wide yellow bordered, less convex lip with an upwards bent border at the middle lobe, endemic in Israel’.

HABITAT: So if I look at the bucephala’s I photographed in recent years on this Andissa habitat then there are a few ‘things’ which didn’t fit in with a ‘real – (as described by GÖLZ & REINHARD) – Ophrys bucephala. First there is the size of the flower and the lip, 12-15.5mm long, 15-19mm wide; but BAUMANN thought it was only 10-12.5 long, 10-14 wide, DELFORGE measured 7-12.5mm x 8.5-15mm (when spread) and that is what I also measured: I never found a bigger lip than Delforge did. So O. bucephala is only a slightly bigger brother of O. umbilicata or have they maybe shrunk in the last 25 years due to what, sour rain, or hybridization with other Ophrys on this habitat?
And talking about strange brews: What do we think of O.bucephala on the second of April last year? Yes, Ophrys bucephala with a pink perianth (sepals & petals)! There goes the assumption that O.bucephala always has a green perianth…

And you will think: Ah, it’s maybe an error of nature, it may have happened only once! Look at Ophrys bucephala from 22-04-2013! I was a little late (for O.bucephala) on the Andissa spot, but again: pink sepals & petals on Ophrys bucephala! And no longer lips than 10mm!

So up to the habitats where GÖLZ & REINHARD, BIEL and other orchid researchers found the real ‘thing’: around Plomari and Spides under Megalochori, to see if there are also pink Ophrys bucephala’s – or Israeli Ophrys latilabris for that matter.

The first habitat where I found Ophrys bucephala on the southern habitats this year was at Spides, just under Megalochori on the 8th of April. There were 2 groups of O. bucephala: a ‘bush’ you see here below and a few more separate plants on the other side of the spot. But if you look at the group below and compare them with the Andissa plants they are actually (almost) the same, only Spides plants has a more stretched and orange stigmatic cavity.

But there were no other ‘strange’ looking Ophrys bucephala around, no yellow lipborders, no pink sepals & petals. We drove further down in the direction of Plomari to spot the other habitats, and we took the track over Kato Chorio down but didn’t find any orchids at all along this track. We decided to give it another chance by driving up a track just before Melinda where last year at the beginning of February I found a lot of rosettes but no flowering orchids. But this time we had more success; at 140 meters height we found Ophrys homeri, Ophrys oestrifera s.l.. Orchis tridentata and some beautiful Ophrys bucephala! I took the measurements of two plants; the lengths of the lips were 9.3 and 12mm (Ophrys below). So only this O. bucephala just reached the measurements of GÖLZ & REINHARD from their paper of 1989: 12-15.6mm long. 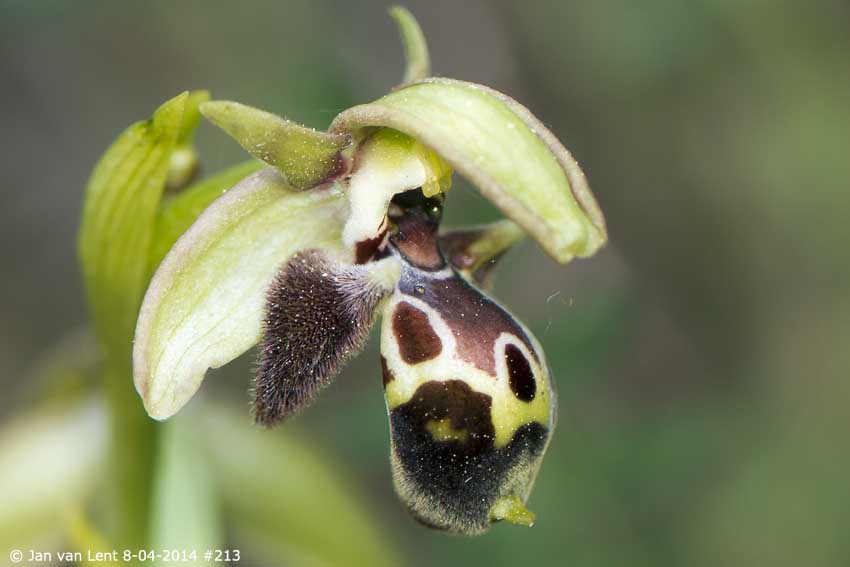 BOTTOM-LINE: So again the question arises (e.g. HENNECKE & MUNZINGER 2014 see Blog 39: ‘The Last Waltz’ http://www.janvanlent.com/blog/?p=2283) if measurements and colour have any sense at all as a distinguishing mark of – in this case – Ophrys bucephala? Is an Ophrys bucephala no bucephala because its flower fails by 2 or 4 millimetres to be a ‘real’ bucephala? And of course we don’t know how different orchid researchers measure a flower – fresh or dried – do they include the appendage or not, which is the point above the side lobes from where they took their measurements? Are there any standards for measuring flowers/orchids/Ophrys? Also: does having a pink perianth instead of a green one change Ophrys bucephala into an Ophrys umbilicata?
My answer should be no, it doesn’t. But very small, medium, large and very large are maybe better ways of describing orchids, and colour always was a subjective distinguishing mark, and very difficult to standardise even with a colour chart placed into the picture as BATEMAN (2013) proposed. 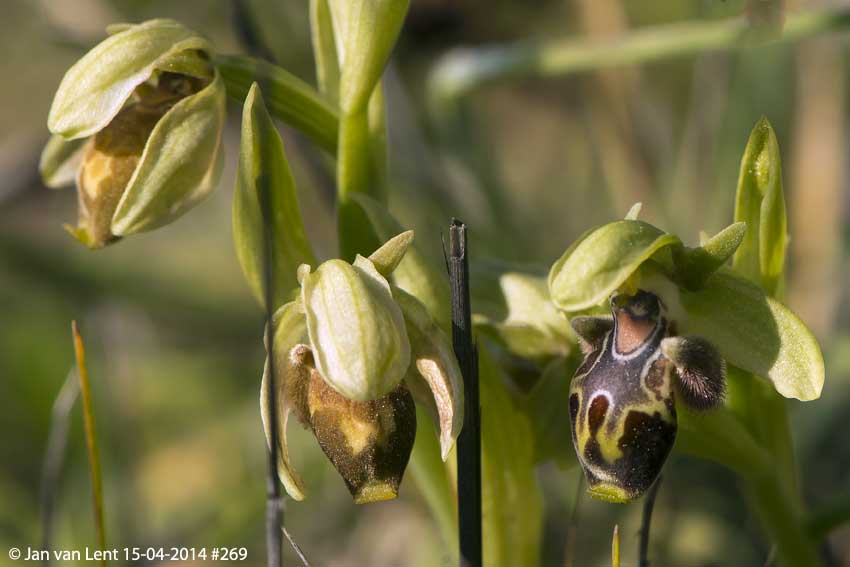 One week later I passed the Spides habitat again and still there were no ‘strange brews’ around between the Ophrys bucephala, the plants just looked more tired – maybe because of all those visiting orchidologists. Again I measured the lips of those ‘bucephala’ and came again no further than a length of 9.8 mm for the biggest lip, so all in agreement with DELFORGE (2005) measurements (7-12.5mm).
Back to the smaller, sometimes yellow bordered and equipped with pink sepals & petals Ophrys bucephala from Andissa: My conclusion could only be that they were approached by different pollinators in the north than in the south, and I do see a lot of hybrid possibilities between Ophrys bucephala and sicula, lindia, lesbis or oestrifera…