Towards the middle of April it becomes really busy and stressful in the Orchid Paradise. You want to and you have to go to all parts and habitats of the island at the same moment and that is impossible. It gets this busy because half of all orchids on Lesvos begin to flower at the same time. And for that reason you go first to the habitats where you know for sure there are sufficient orchids around to photograph. But you have to search also for new locations and habitats because you want to find new or different species as well. So every now and then you turn your car into an unknown forest or mountain track. Or you park your car, take your camera gear and start walking. Exciting! Sometimes you are lucky and sometimes you walk or drive around for hours without seeing one single Orchid. And then you regret not going to an already known orchid habitat. But why this introduction? 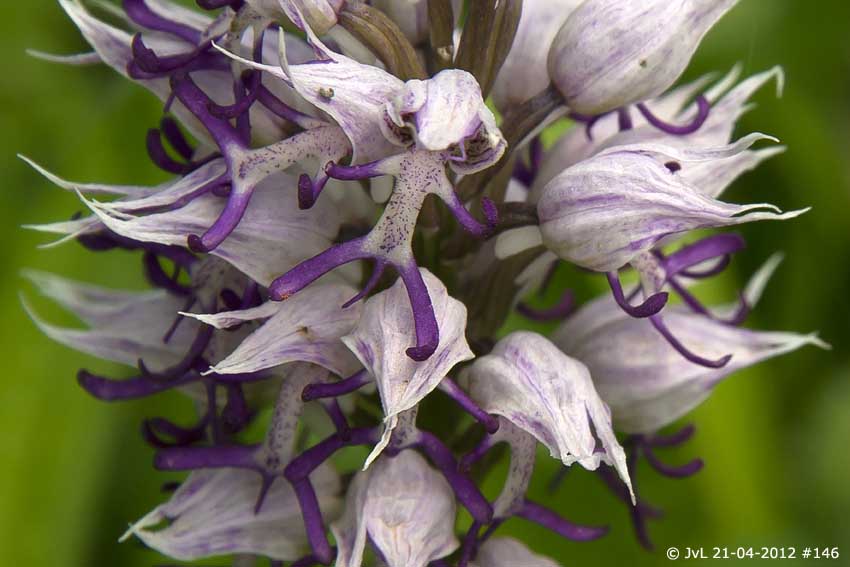 HUNTING: Because 3 years ago, for the above mentioned reason, I took a side track off the route along the coast between Lapsarna (completely at the end of the north-west part of Lesvos) and Liota/Lygeri (a hamlet which has a great restaurant around a hollow tree) and after half an hour nerve-racking 4×4 driving, including crossing a very small bridge by the narrowest margin and driving along a completely overgrown track where the grass was so high you couldn’t even see where you were going, I reached the point of no return. This means that at a certain moment I decided that this track was getting nowhere and therefore I wanted to turn around. But turning a big car on a track of 2 meters wide actually is not something you want to do. So I stepped out and walked further to find a spot or sidetrack were I could turn. I noticed that I was separated by a steep ravine from the calcareous hill where I actually wanted to go. This hill, on the road to Gavathas, is disappearing very fast because of the cement industry. This big hill, with the name ‘Grigorélli’ (that meant something like ‘steep’ or ‘fast’ but nowadays it probably means ‘fast disappearing’, is being completely excavated. This cement industry is as a matter of fact ‘recycling’ a lot of the limestone hills (the favourite habitat of most orchids) of Lesvos at a record speed. Anyway. 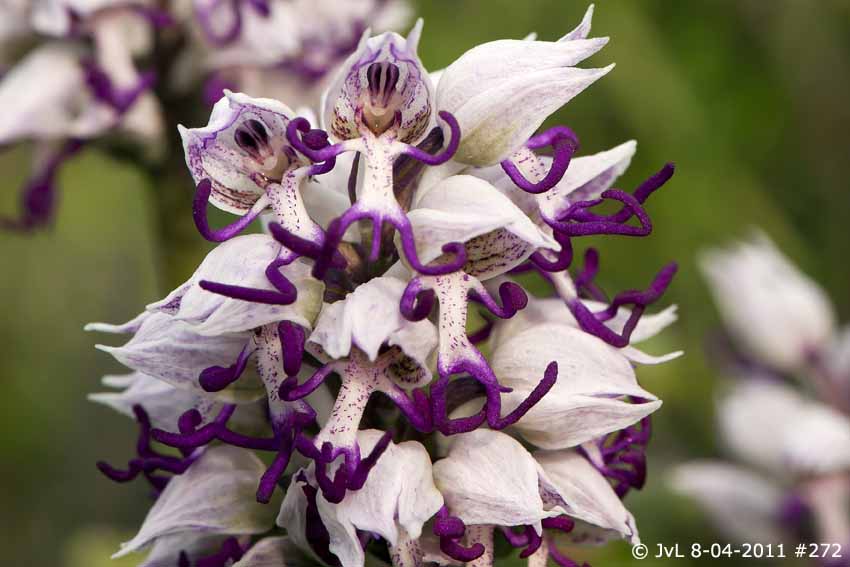 HABITAT: Walking along this path, with a beautiful view over Liota, Gavathas and the sea, I saw in front of me a few big pink-purplish orchid-like flowers standing at the side of the road, Orchis italica, I thought on first sight, the naked-man Orchid? No, when I came closer they happened to be Orchis simia, the Monkey Orchid, an intriguing species that I hadn’t found and photographed yet. This illustrious orchid is difficult to find on Lesvos and maybe it is getting rare on the island. The preceding years I couldn’t find them, but maybe I was at the wrong times and the wrong places because last week I found tens of them on a side path from the road between Andissa and Lapsarna…But back to my Liota path. I continued to walk and found a very steep path where I could turn (20 times to and fro, sometimes hanging backwards). But before I did that I walked to the end of this path and I found tens of… (To be continued next week). 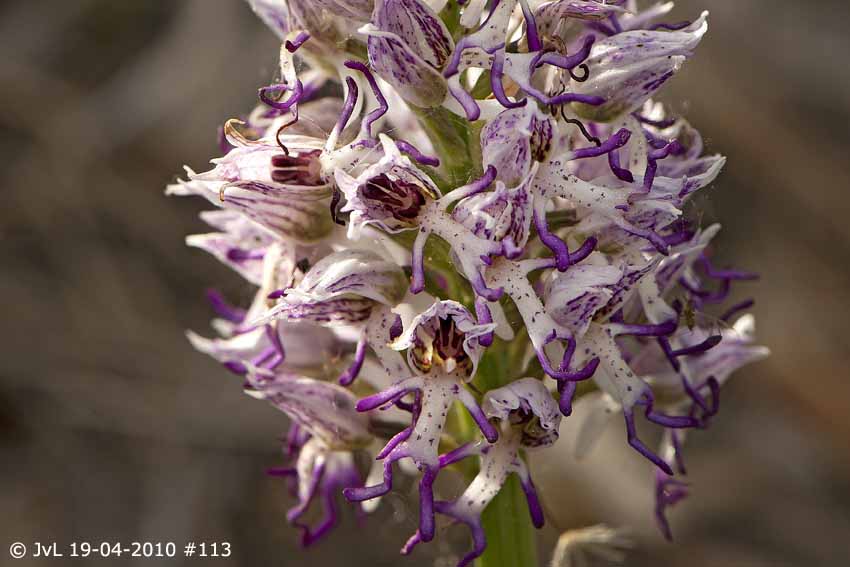 RESEARCH: About the name: – almost all orchidologists agreed on Orchis simia (Lamarck 1779). Then in 1843 a certain Mr. Lindley was eager to put his name behind this orchid so he called it Orchis macra Lindley. And then there were the gentleman Bonnier & Layens who thought in 1894 that it also could be Orchis militaris subsp. simia (Lamarck) Bonnier & Layens; therefore they could put their names in orchid history. A very popular occupation, this copy, cut, rename & paste activity among orchidologists, apparently as well in the old days.

SUNDERMANN already reported in 1980 that even though this southerly species has a wide distribution it was nevertheless quite scarce on the European continent.
In ‘Die Orchideen der Türkei’ on the other hand, KREUTZ (1998) reported that Orchis simia is not a rare species at all in Turkey and that it flowered in almost the whole country (except in the interior Anatolian region). But I am wondering if that might be still the case, because of the digging out of the bulbs by salepi dealers. I don’t think that digging out is the problem in Rhodes and Karpathos, but on both islands Orchis simia is also a very rare species. (KREUTZ, ‘The Orchids of Rhodos and Karpathos’, 2002).
The same is apparently true for Chios (TAYLOR 2012) because Taylor, Saliaris & Delforge didn’t find Orchis simia on Chios, Inouses or Psara. Cyprus (KREUTZ 2004): ‘Orchis simia is rare on Cyprus and its numbers are also declining due to excessive grazing, the species can therefore be categorized as threatened.’ It is as if I hear myself talking about Lesvos…
On Crete Orchis simia occurs locally in large populations (KRETZSCHMAR & Eccarius 2004), but ‘it is a conspicuously squat plant on Karpathos, and rare on Rhodes.’ DELFORGE (2005) noticed that the Orchis simia distribution is Mediterranean-Atlantic. Growing from the north to the south of England and Holland, east to Iran and Turkmenistan. But: ‘rather scattered and rare.’
Holland? Finally I can use ‘De orchideeën van Nederland’, (in English: ‘The Orchids of Holland’), KREUTZ & DEKKER, published in 2000. But (translation JvL): ‘The Monkey Orchid occurs nowadays only in the South of Limburg (the most southerly province of Holland, JvL). Besides the south of Limburg it was only found on one occasion in 1905 in the dunes near Scheveningen. It concerned only one plant and it appeared for only one year.’ Orchis simia doesn’t seem to like periods or even days and nights of frost…BAUMANN H./KÜNKELE S./LORENZ R. (2006), ah, I forget to mention them in my research introduction: they go for the name Orchis simia subsp. simia, and let me guess, B. Baumann & H. Baumann? No! No author and date at all!

BOTTOM-LINE: KARATZÁ (2008) has 4 habitats for Orchis simia on Lesvos: Around Loutrá, Pigí, Ag. Pareskeví and Ándissa. Well, a few kilometers down from this last habitat, on the side track off the road to Lapsarna, I found this year 18 Orchis simia plants. And please help me out here Karatzá: for the last 5 years I have gone every year to Pigí to photograph all these beautiful, special orchids you mentioned for this habitat in your book, but I never found one… Where did I go wrong?

ETYMOLOGY:
Simia: monkey (an allusion to the shape of the lip).

NAMES: Jean Baptiste Pierre Antoine de Monet, Chevalier de la Marck (1744-1829), often known simply as Lam. or Lamarck, was a French naturist, soldier, biologist, academic and an early proponent of the idea that evolution occurred and proceeded in accordance with natural laws. Lamarck developed, after being wounded, a particular interest in botany, and in 1779, after he published the three-volume work Flore françoise, (in which he described Orchis simia for the first time) he gained membership of the French Academy of Science. Lamarck became involved in the Jardin des Plantes and was appointed to the Chair of Botany in 1788. When the Muséum national d’Histoire naturelle was founded in 1793, he was appointed as a professor of zoology. (Wikipedia) 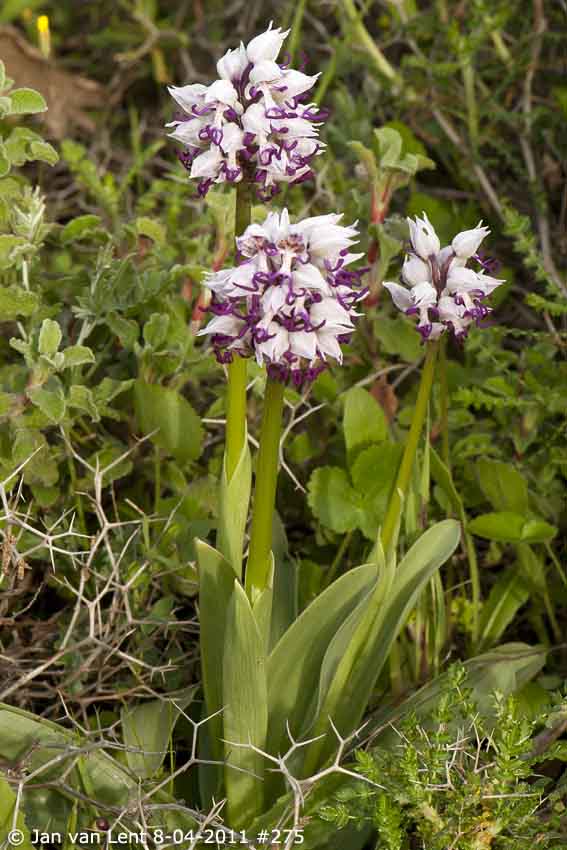 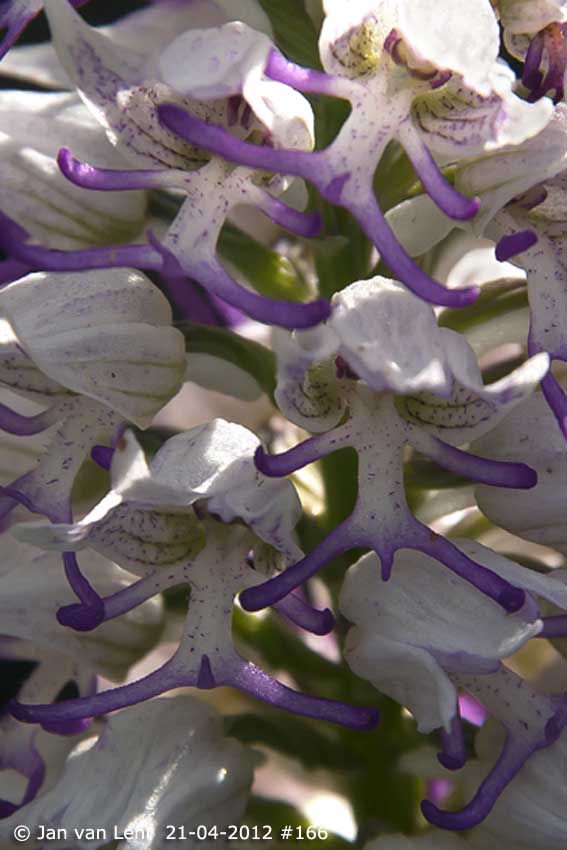 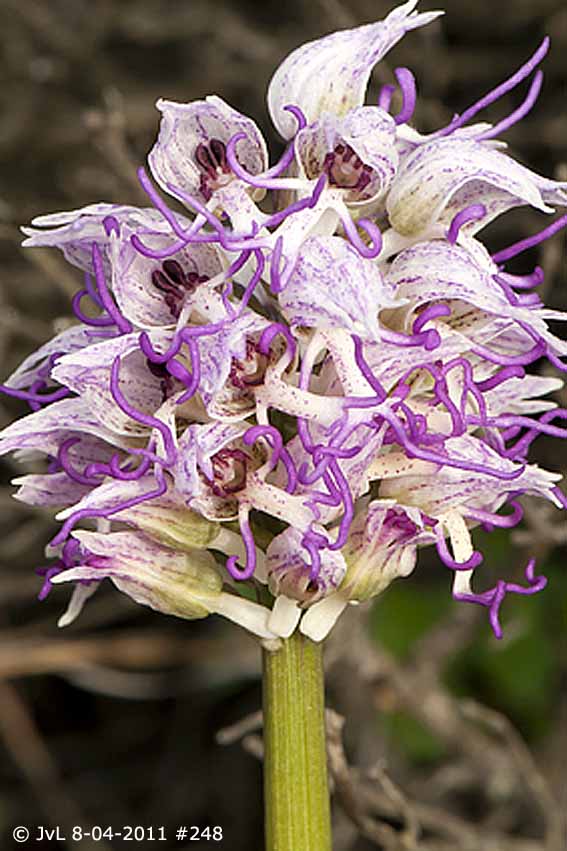 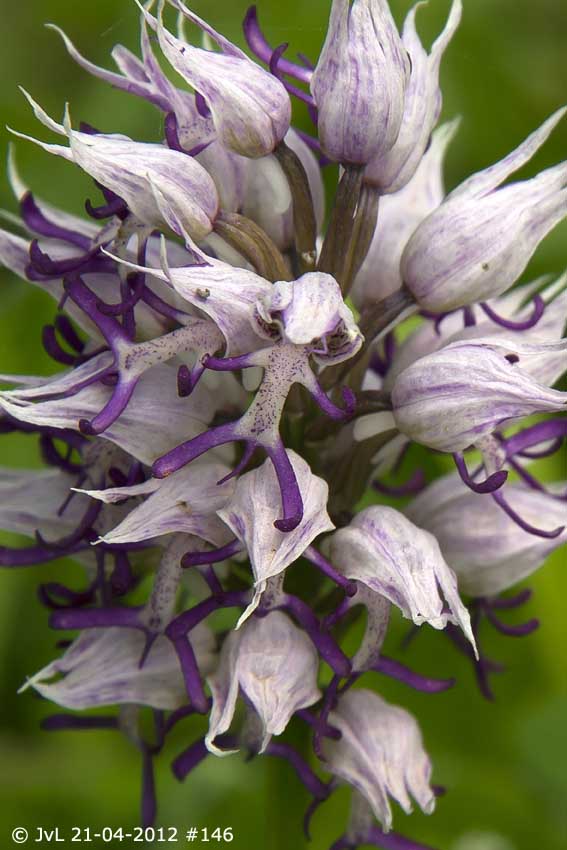