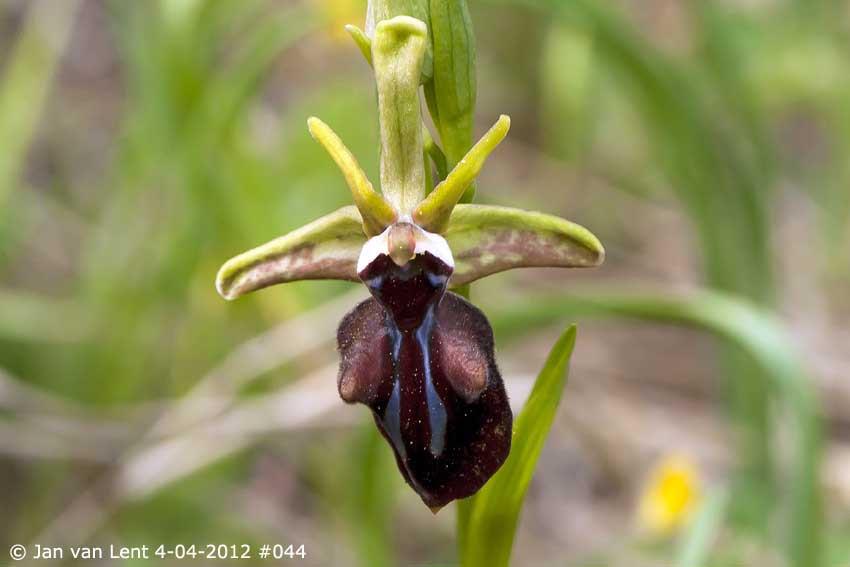 HABITAT: It has been raining for two days now in Eftalou and it is the middle of April. Really I should do Ophrys mammosa because they are already flowering for 2-3 weeks everywhere in the olive groves and fields above our house and they are already beginning to wither. And they are also moving around, they are ‘on foot*’ so to say. One year at the left side of a goat path under an olive tree, the next year on the right side of the same track inside a big white Asphodel, one year under my chair in our olive grove and this year in front of our wood pile. 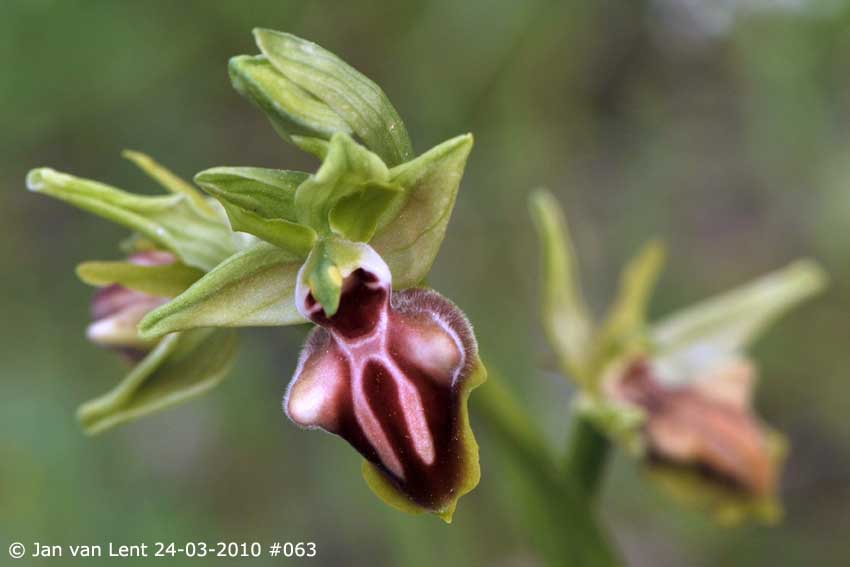 But actually I waited so long because I hoped that the ‘red one’ would appear: Ophrys alasiatica (or maybe a red Ophrys pseudomammosa from Turkey or a red Ophrys morio from Cyprus, the seeds blown in by the southeast winds from last winter). But I don’t think it will appear, because on the spot where I saw and photographed this plant two years ago, on the 24th and 26th of March, there is nothing more to see than the ‘going’ Ophrys sicula and the rosettes of the ‘coming’ Ophrys sancta.
And maybe the late mammosa ones like Ophrys hystera and Ophrys aesculapii var. planimaculata still can appear. They were flowering in Eftalou for several years but the last two years they didn’t come back. Okay, Ophrys collina came back and I found a Himantoglossum robertianum in Eftalou (see Blog 7) so I can’t complain this year; until now only Ophrys umbilicata didn’t return to his spot in Eftalou. 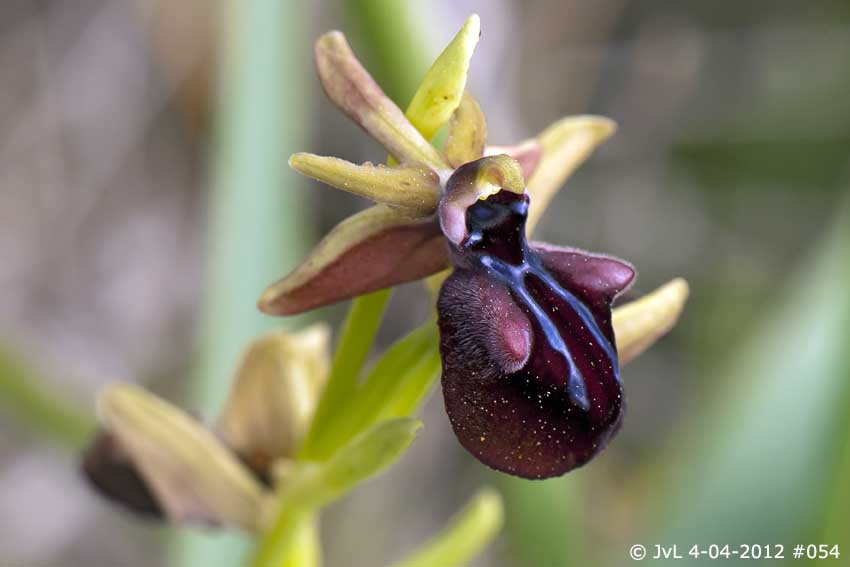 But let’s go first back to ‘the blue eyes’ Ophrys mammosa. Blue eyes because that is one of the distinct features of this Ophrys, or so I thought until today. But now I’m not so sure anymore; I see more black than blue eyed Breasted Ophrys in my books, so maybe this is a distinct feature of the Lesvos mammosa? (Ophrys aesculapii has green ones, as has Ophrys herae; Ophrys alasiatica blackish, surrounded by white shiny pseudo-eyes, Ophrys hystera has white to bluish pseudo-eyes with a greyish central spot). The other speciality of Ophrys mammosa (hence the name) are the big ‘breasts’ of course, the forwards pointing basal swellings of the lip. Another feature? The bicoloured lateral sepals; green on the upper part, reddish purple on the lower part. Ophrys spruneri on the other hand has completely rose-coloured petals and sepals.

RESEARCH: In 1980 SUNDERMANN described Ophrys sphegodes with 14 subspecies (and 2 variations) for Europe, so actually this was already the Sphegodes group. One of the subspecies was Ophrys sphegodes ssp. mammosa. Later on this became the sphegodes/mammosa group because mammosa became a more and more dominant species within the group.
Recently DELFORGE (Europe e.a 2005) rearranged sphegodes/mammosa into a small mammosa group (14 species) and a big sphegodes group (40 species) for Europe, North Africa and the Middle East. ANTONOPOULOS (Greece, 2009) did the same thing but he has a big mammosa group (15 species) and a small sphegodes group (10 species) for Greece. Also KRETZSCHMAR (2004, Crete, Karpathos and Rhodes) describes a sphegodes/ mammosa group but with only O.mammosa in the red/green group, the others (O.herae, O.sphegodes plus ssp. cretensis and ssp. gortynia) are in the green Sphegodes group.
TAYLOR (Chios 2012) found only Ophrys mammosa on Chios, no O. spruneri or sphegodes. And none of those 3 species were around on Inouses or Psara.
BKL (2006) exploit the name Ophrys mammosa ssp. mammosa and they have another 6 subspecies to offer, but none of them flowers on Lesvos. PEDERSEN/FAURHOLDT (2007) are nostalgic orchidologists (nostalogist or nostalgialists?) and they are going back in time to the seventies: the old Ophrys sphegodes group with Ophrys sphegodes ssp. mammosa and they describe only one species with greyish blue eyes (or in their terms: ‘eye-like knobs’) and that’s Ophrys sphegodes ssp. epirotica. But this subspecies with its more broad rounded lip and yellowish lip margin is not (yet?) flowering in Lesvos, only in Albania and north-western Greece. 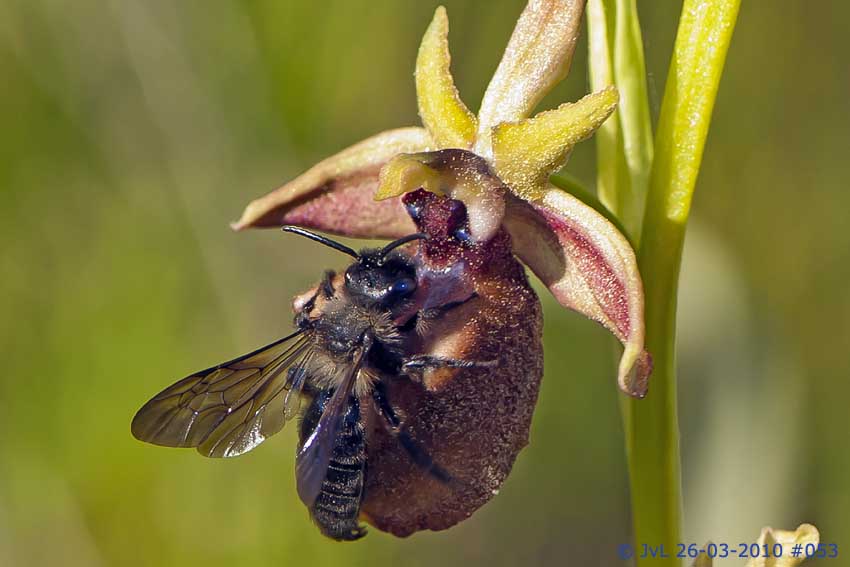 There remain KREUTZ and KARATZÁ. To begin with ‘Die Orchideen der Turkei’ (KREUTZ 1998): No O.alasiatica, herae, hystera, spruneri or sphegodes, only O.mammosa and O.pseudomammosa and (from the ferrum-equinum group) O.ferrum-equinum itself and O.labiosa of course, (because he described the plant and put his name behind it).
In ‘Die Orchideen von Rhodos, Karpathos’, (KREUTZ 2002), there is not so much to find because Ophrys mammosa is relatively rare on Rhodes and very rare on Karpathos. The only other species of the group in this book is Ophrys transhyrcana but this Ophrys is also extremely rare on Rhodes (only known from 3 locations) and extinct on Karpathos. The (for me) most interesting book is ‘The Orchids of Cyprus’, KREUTZ (2004). In this book Kreutz starts his Ophrys part with Ophrys alasiatica. And when I compared my ‘red’ mammosa with his (small) photograph of alasiatica on page 158 I thought: ‘well, maybe here is some resemblance’. And on Cyprus he describes besides Ophrys mammosa also Ophrys herae, O. hystera and O. morio. And look at his photograph of the ‘red’ morio on page 185: almost identical to my red mammosa species!
KARATZÁ found Ophrys spruneri in the region between Thermi, Pigí and Moria. He photographed an Ophrys aesculapii with green eyes and a big yellow margin on the lip in the Arápi Pétres (behind Mesa sanctuary) and Ophrys mammosa for instance around Andissa in the northwest, but all the other locations are in the southeast of Lesvos. 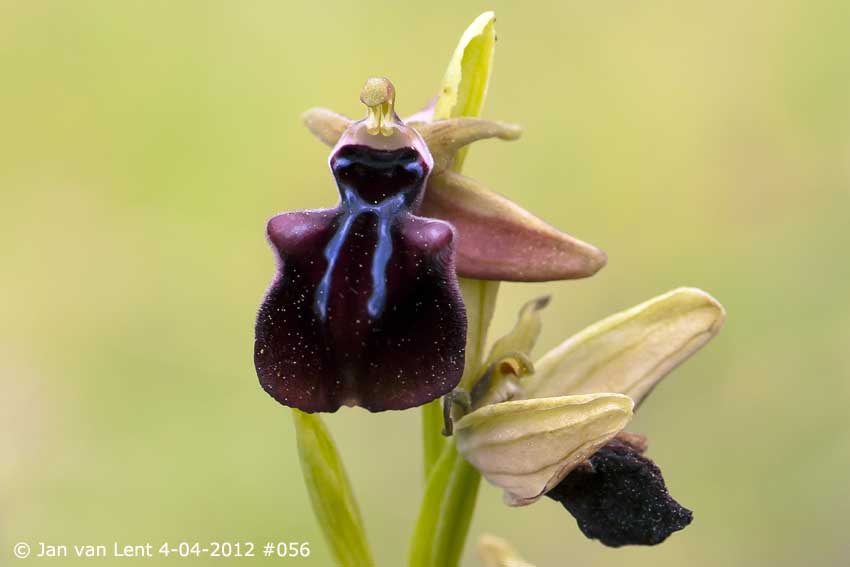 BOTTOM-LINE: Until now I only found Ophrys mammosa in Eftalou and Anemomilos (in the southeast, the Loutra side) on the gulf of Gera. In Anemomilos they were so big that I couldn’t miss them, in Eftalou I have tens of species, all individual plants with intense blue eyes, the most of them small and ‘travelling’ fast. These are difficult days in Eftalou; looking down all the time so you don’t step on one and crouching down when Andrena fuscosa, the pollinating bee of Ophrys mammosa is flying over to the scattered locations of ‘my’ Big Breasted Ophrys. Shall I apply for road signs?

On my website janvanlent.com there was a incorrect E-mail address under CONTACT.
This has to be: vanlentlesvos@gmail.com.

*‘On foot’: the new walking guide for the whole of Lesvos by Mike Maunder and Sigrid van der Zee. Don’t go walking or looking for orchids without it…(www.lesvoswalks.net) 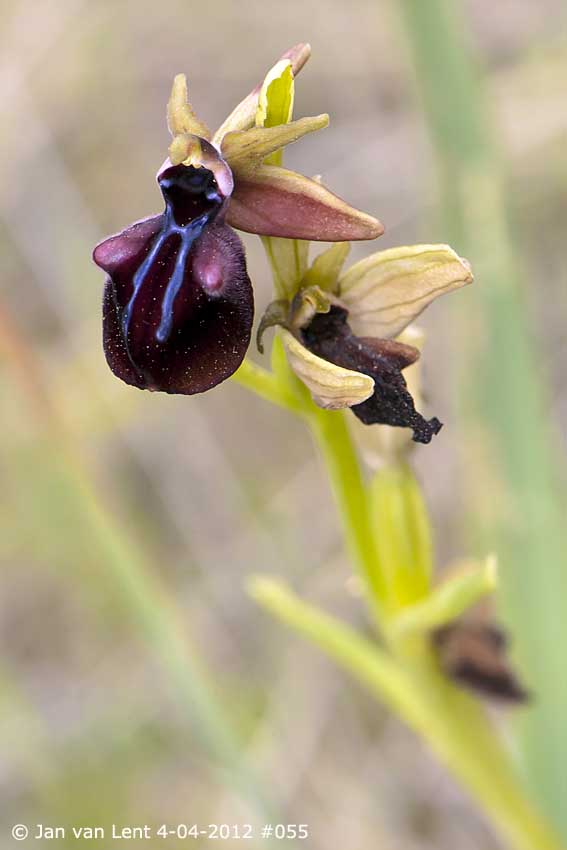 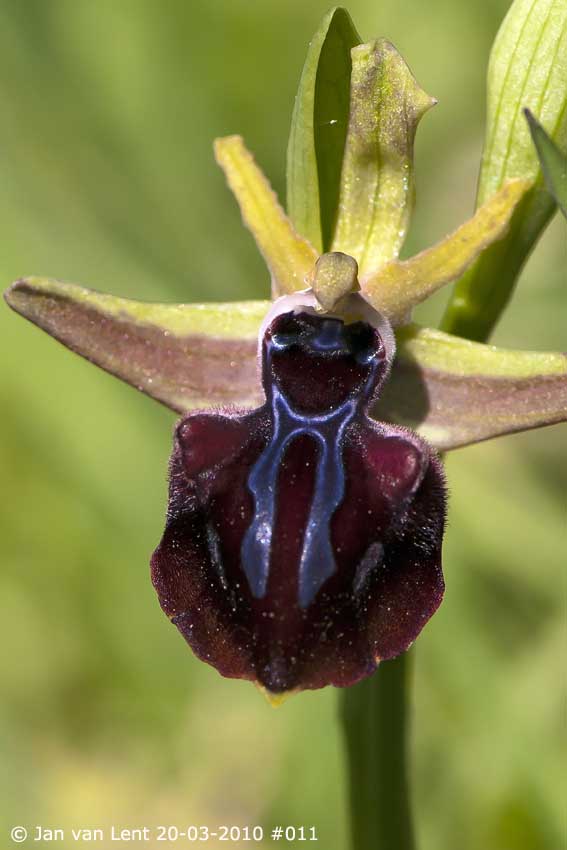 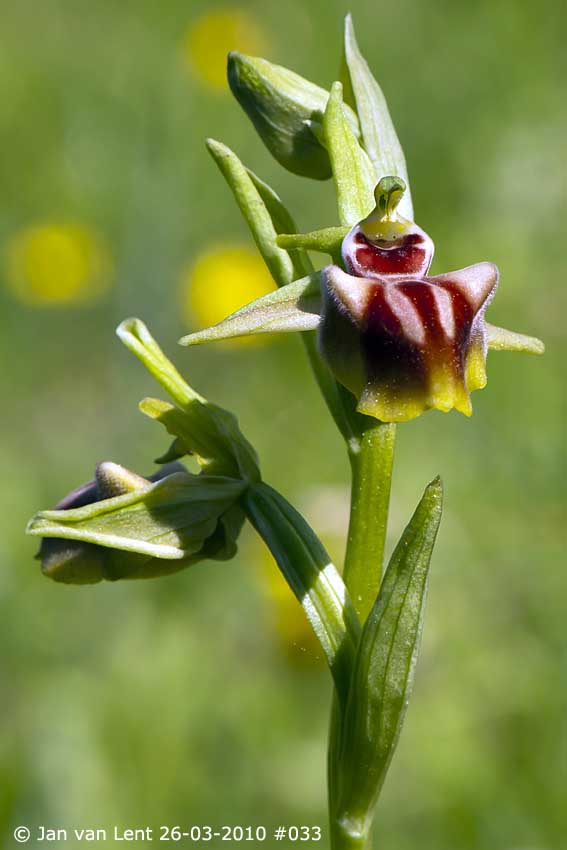 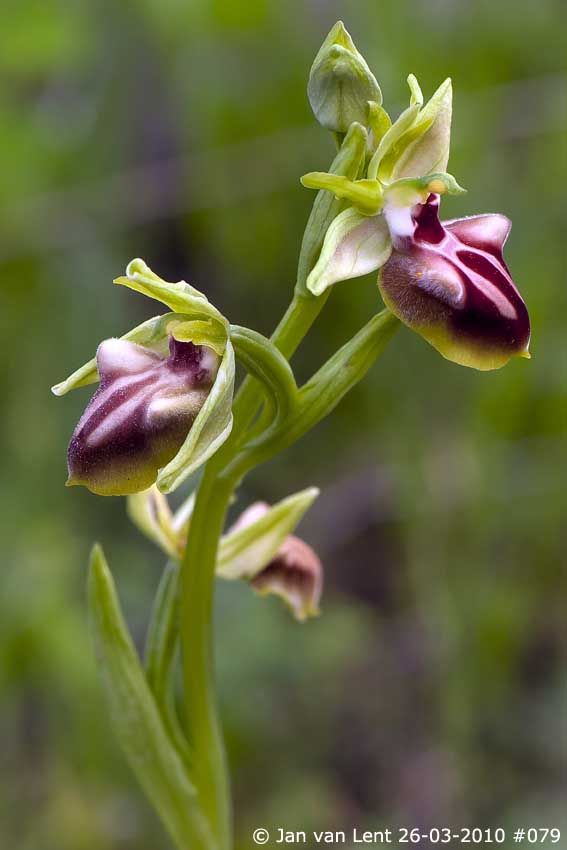 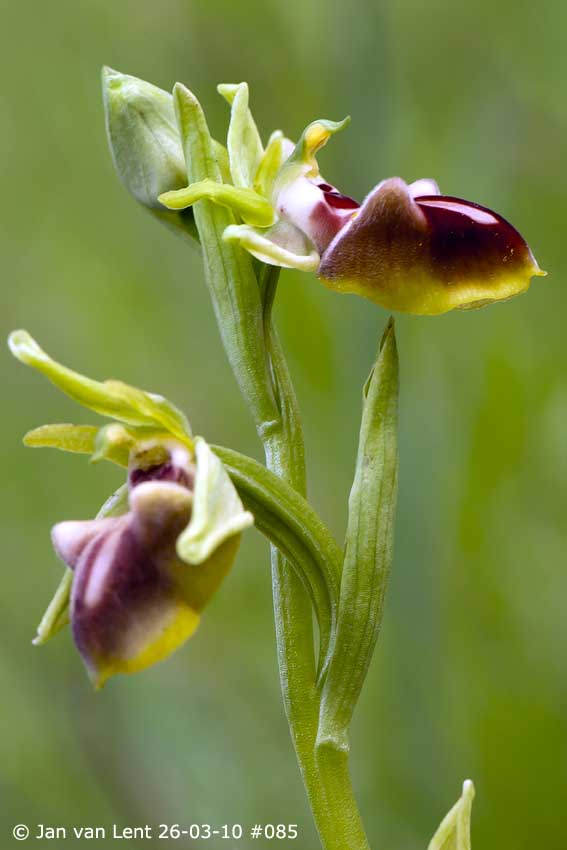 NAMES:
René Louiche Desfontaines (1750-1833), French botanist, professor of botany and director of the Jardin des Plantes in Paris. Desfontaines spent two years in Algeria and Tunisia, and explored the region from the seacoast to the Atlas Mountains. He returned with a huge collection of plants which became part of the herbarium of the Natural History Museum and was described in his great work, Flora Atlantica, 2 vols. (1798-1799). In it are descriptions of 1,520 species and of more than three hundred genera previously unknown to botanical science. Many of the illustrations in Flora Atlantica were drawn by the renowned painter, Pierre-Joseph Redouté. In his life time, Desfontaines was acknowledged to be one of France’s most important men of science. In 1807 he described Ophrys mammosa for the first time. 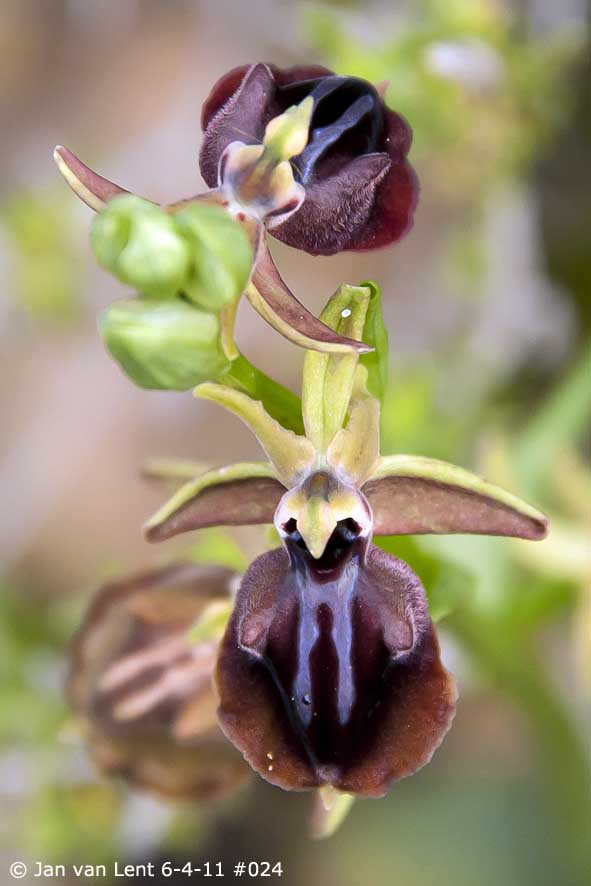 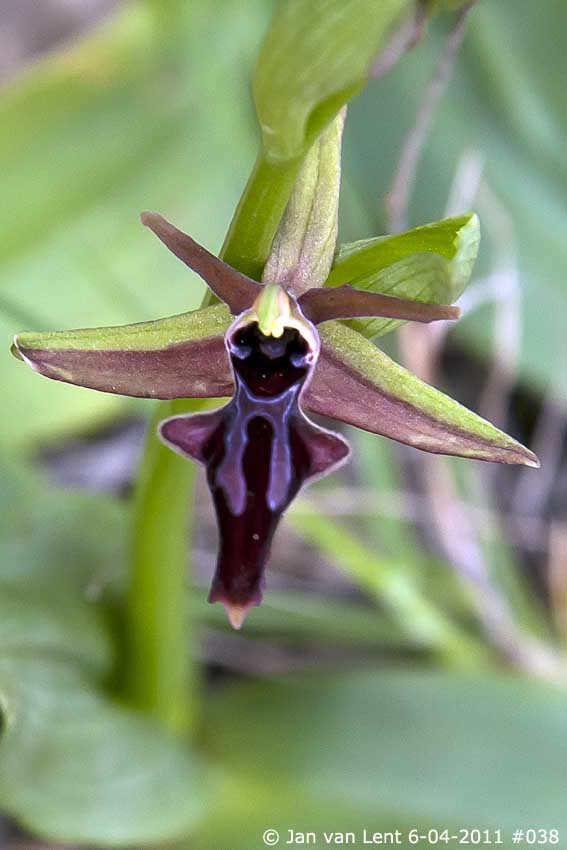 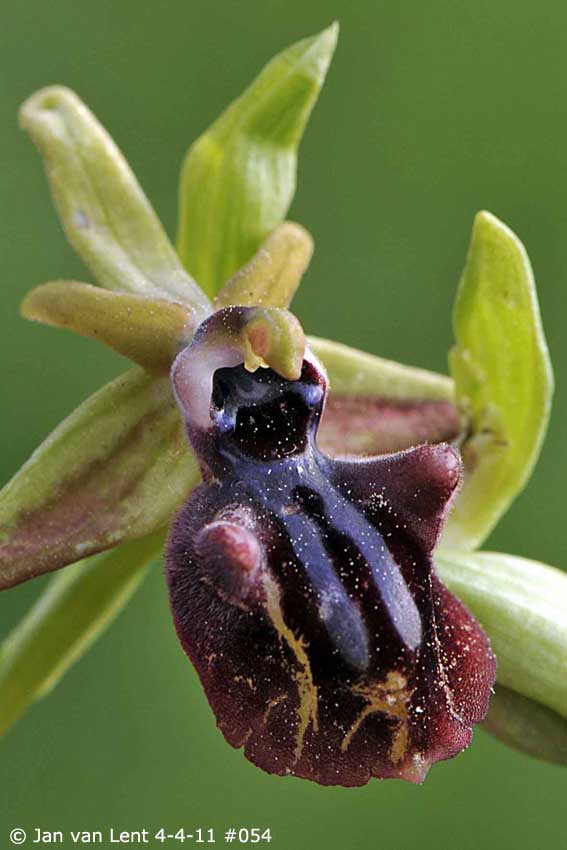