HABITAT: There are some days that miracles seem to happen all at once. For instance; here in our own ‘olive grove’ in Eftalou there were for several years 2 Orchis collina popping up every year. And suddenly, last year, they didn’t came back. I couldn’t even find their rosettes anymore. So last Saturday when I walked through the garden I thought, ‘why not look at the spot where the ‘collina’s’ were growing, maybe they’re back’. Well, nothing there. I looked around because I saw, two months ago, when the grass was not as high as today, many rosettes from the Holy Orchid, Orchis sancta, which is growing in abundance in Eftalou. And yes, there it was again, the Fan-Lipped Orchid, still small but beautiful. On a spot 5 meters away from where the ‘old’ ones were growing. But the ‘old’ ones had a completely different colour; they were rose-red, not white, dark red and green on the border of the lip. And when I last photographed the plant in 2009, it had yellowish-orange underskirts, maybe a sign that it had enough from this world and didn’t want to come back next year. But of course I didn’t recognize that sign. 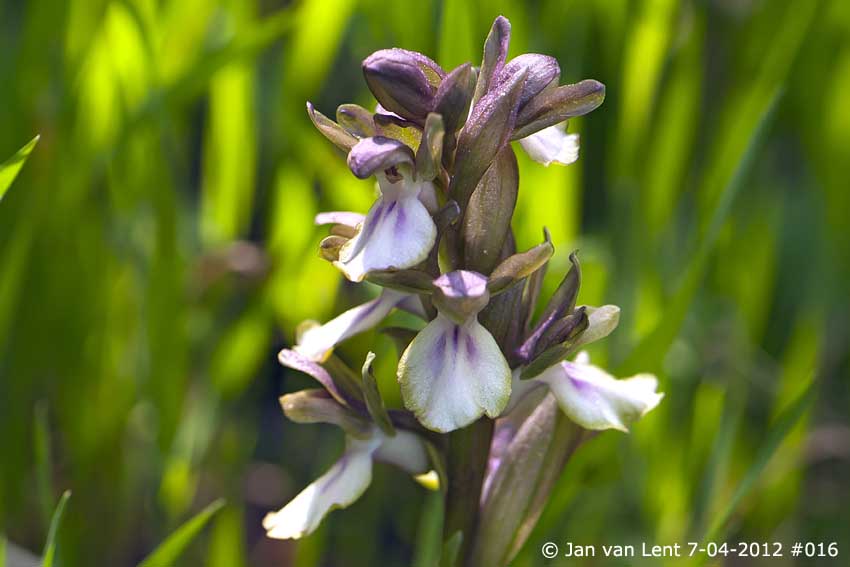 REMARKS: Orchis collina is normally one of the first orchids to flower in spring and it is easily recognizable by the fan-like lip with a hole at the base, the darker markings in the middle of the lip and the thick, sac-like spur. The ‘wings’, the sepals, are just like a bird of prey, spread out, therefore the flowers make the impression of hovering (as in the Orchis mascula/ anatolica group). The colour of the flowers varies from whitish-green and pink-reddish to dull brownish-mauve.

And here is something remarkable about the Eftalou flowering collina’s: they were always pinkish-red. Not only the ones down in our garden but also the 2 species I discovered in 2008 in the ‘stone field’, this is a ‘hilly’ olive grove down from a small waterfall (only during winter and spring of course) between our house and the (ex) garbage dump. After that year they never came back. But they had the same colour; pinkish-red. Last year I found a few Orchis collina at the hill edge next to Andissa, and they were almost the same colour as the one who is now growing in my garden. Did I unintentionally take seeds with me from those orchids? Is that the reason the newcomer was 5 meters away from the spot of the old ones? Is this a new plant? 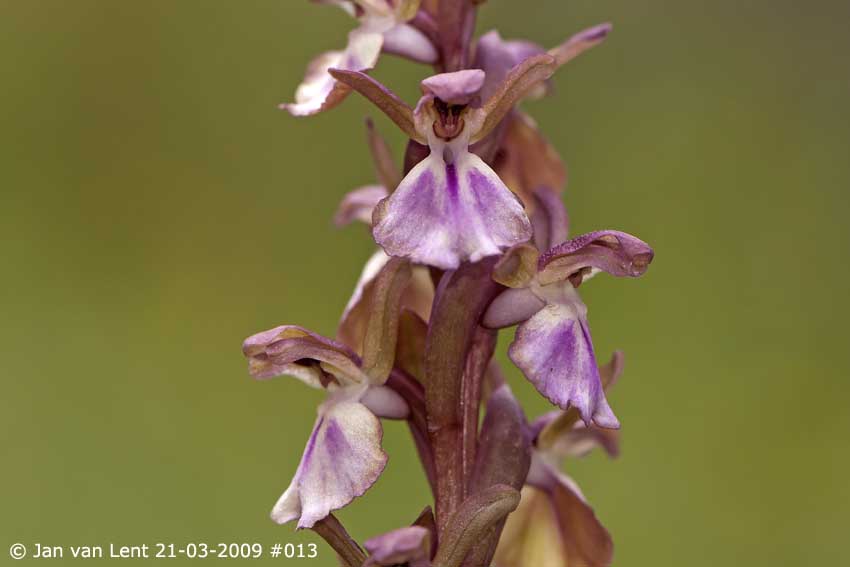 RESEARCH: John & Gerry (www.orchidsofbritainandeurope.co.uk) mentioned on their website that Orchis collina ‘is an unreliable flowerer and its appearance at all can be sporadic depending on the preceding winter/spring weather conditions’. Aha! By the way: All their photographs of O. collina are taken on Lesvos in the beginning of April.

After the eighties (SUNDERMANN Europe 1980) there didn’t change much in ‘Collina-land’; BAUMANN/KÜNKELE/LORENZ (Europe 2006) have nothing new to report on this species, not even a new subspecies name, neither has TAYLOR (Chios 2012, no Orchis collina around) and KREUTZ (1998-2002-2004), except that Orchis collina is not (anymore) flowering on Karpathos, but present on Rhodes, Crete and Cyprus but only occasionally in Turkey; KRETZSCHMAR & Eccarius (Crete & Dodenkanense 2004) feature the English name Hill Orchid instead of Fan-Lipped Orchid and KARATZÁ (Lesvos 2008) informs us that the Lófou Orchid (Lófos = hill) is flowering from Sigri to Gavathas in the west, around Achladeri at the Gulf of Kalloni to Plomari in the south and Ag. Marina in the south-east of Lesvos. DELFORGE (Europe 2005) on the other hand, has a lot of info, but mainly on the papilionacea group and Orchis papilionacea itself. He places collina in this group because of the entire fan-shaped and sometimes near rhomboidal lip of both species.

BOTTOM-LINE: The last four years I only found one Orchis collina high up Mt.Tavros above Komi, and four species at the Andissa ‘corner’.  So today we ‘also’ can add Eftalou as an Orchis collina habitat, and in the north ofLesvos…

‘Also’ because after ‘shooting’ Orchis collina and drinking a cup of coffee I did my daily walk through the abandoned olive groves up from our house. Because: ‘you never know’. And indeed you never know because in a field, in the most far away and most completely neglected olive grove in the whole neighbourhood, I saw a strange, big plant standing upright. And when I walked to it I realized that this was not possible: a Himantoglossum robertianum lost in ‘wonderland’. Just two weeks ago I wrote a blog about this amazing orchid and I complained that I only found 2 species on the Mt.Gerania after unsuccessfully driving up and down the track between Mytilini and Loutra (in the south of Lesvos) for years. And then here it is, standing in my own back garden. Thank you, Alice! 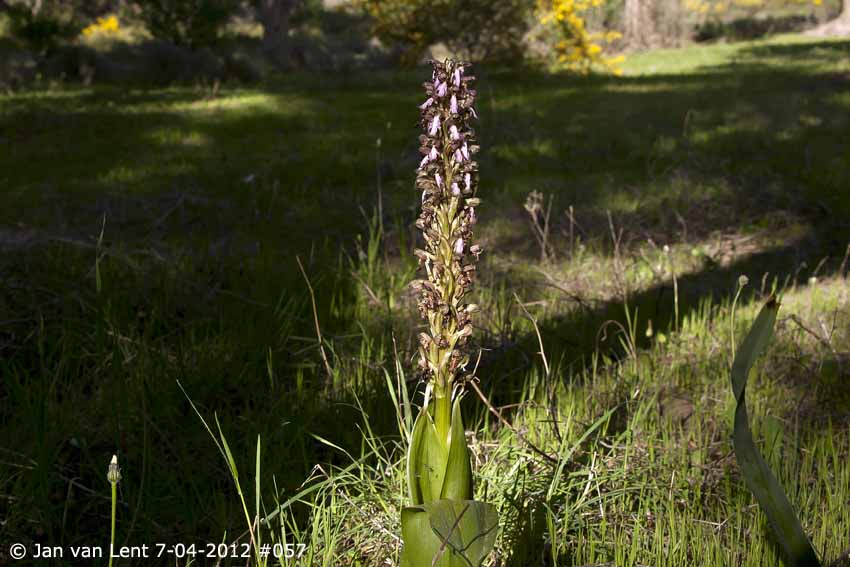 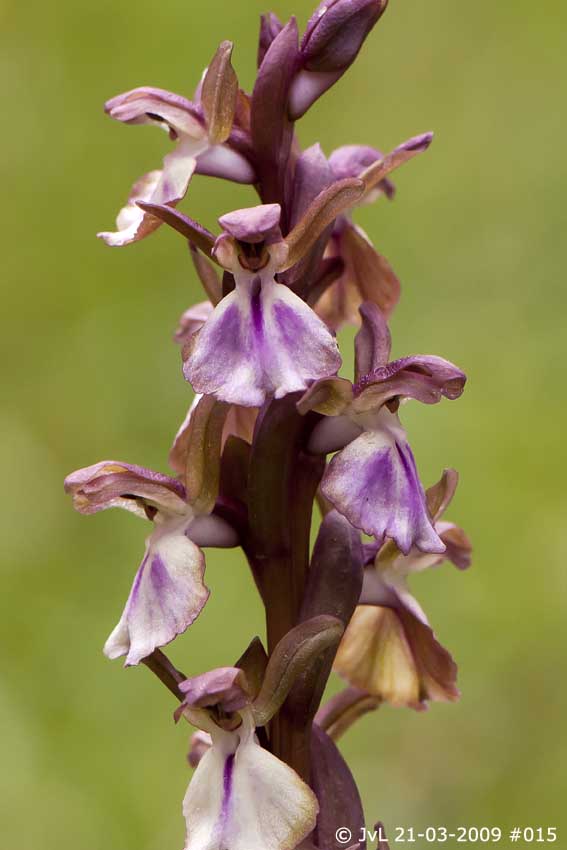 ETYMOLOGY:
‘collina’ = hilly. The old name ‘saccata’ is a reference to the sac-like spur. 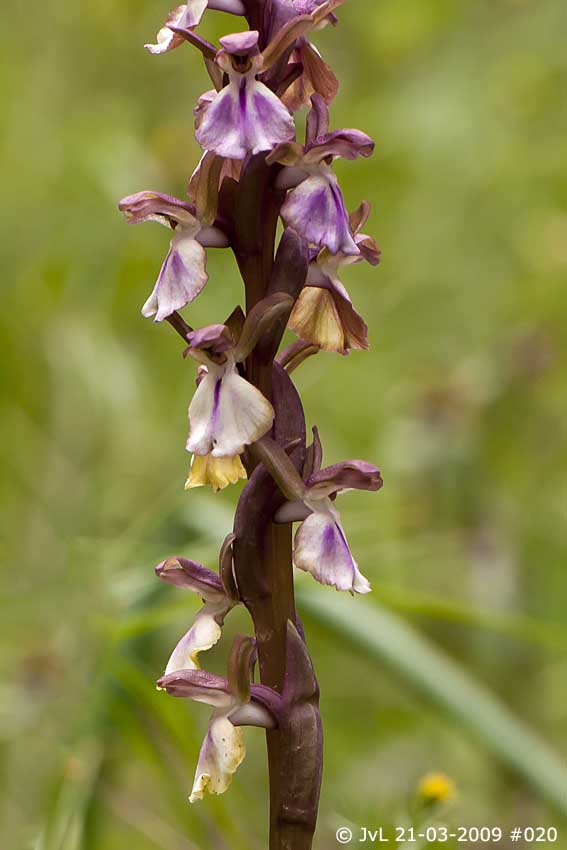 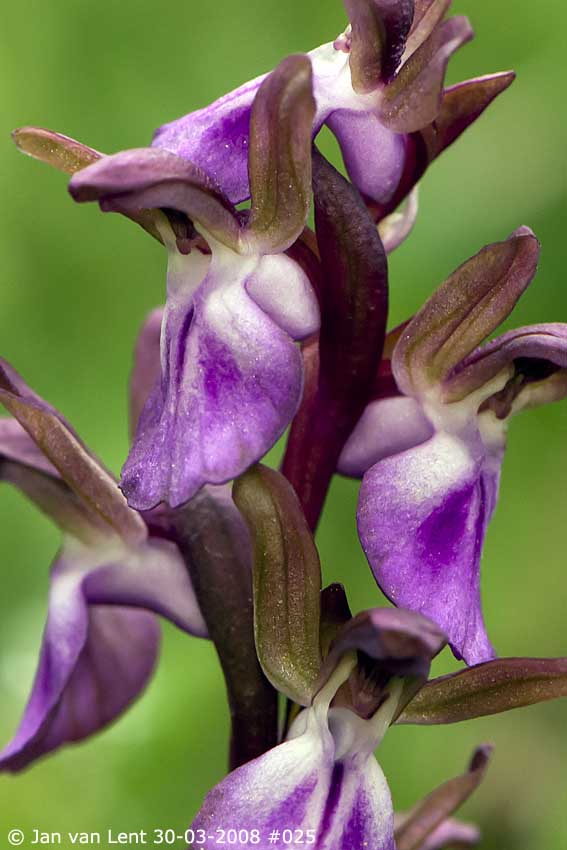 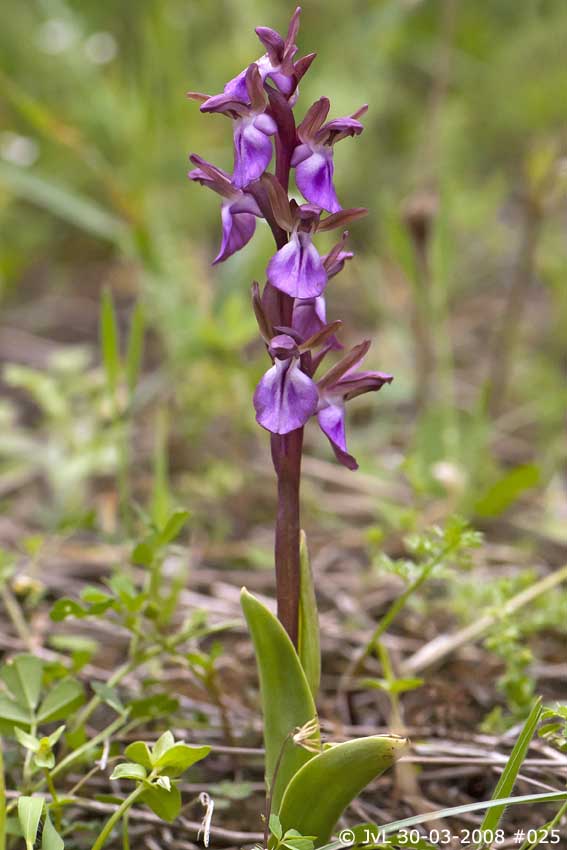 NAMES:
Banks = Joseph Banks (1743-1820), was a famous British explorer, naturalist and botanist who, as long-time president of the Royal Society, became known for his promotion of science. In 1766, Banks travelled to Newfoundland and Labrador, collecting plant and other specimens. In 1768, he (and Daniel Solander, 1733-1782) joined the Society's expedition, led by Captain James Cook on board the Endeavour, to explore the uncharted lands of the South Pacific. The expedition circumnavigated the globe and visited South America,Tahiti, New Zealand, Australia and Java. Banks (and Solander) collected an enormous number of specimens on the way (110 new genera and 130 new species).There are approximately 80 different plant species named after him, but also Banks town in Australia, the Banks Islands (a volcanic group of islands in the Pacific explored and named by Captain Bligh - Banks had helped arrange a previous expedition of Bligh's on HMS Bounty, which had ended in the famous mutiny), and a peninsula in New Zealand: Banks. A proposal of Linnaeus however to rename Australia in ‘Banksia’ was not accepted… In 1797 Banks became director of the Royal Botanic gardens, Kew, which soon became one of the most prominent botanic gardens of the world. 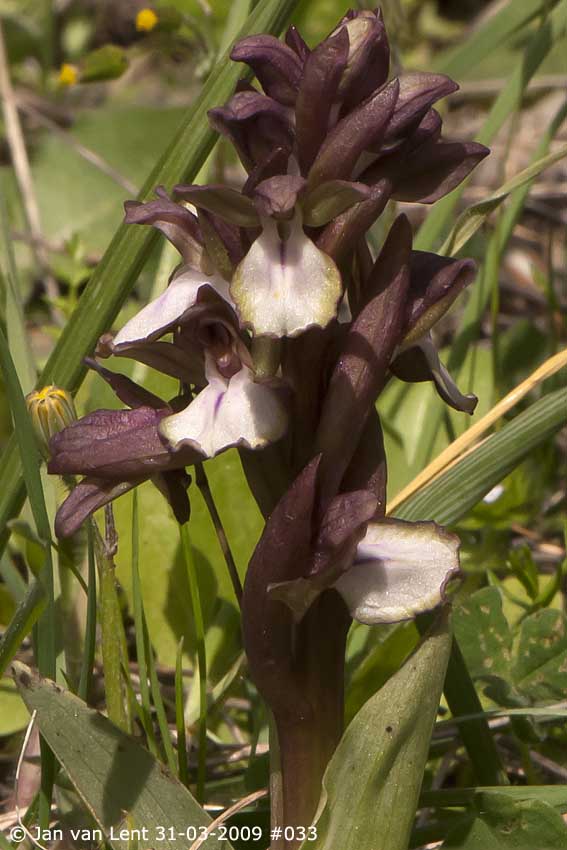