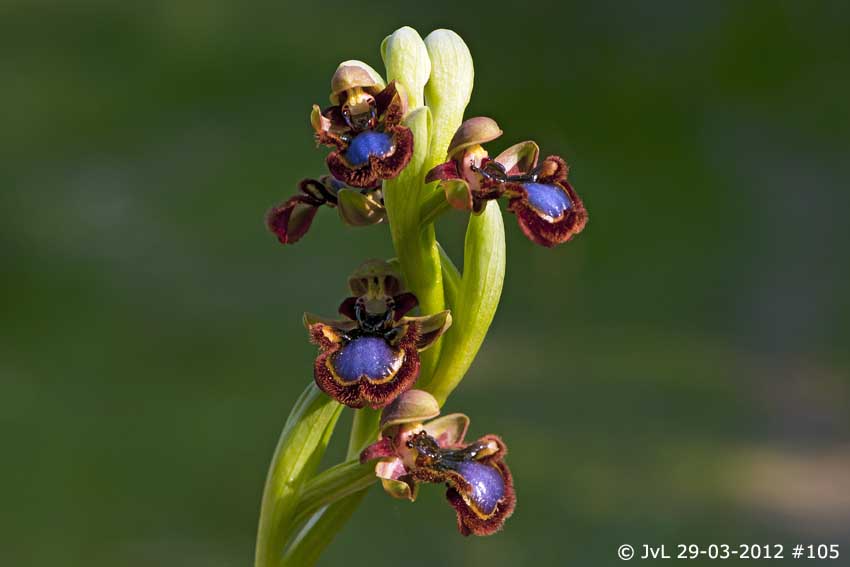 HABITAT: At the side of a small goat path in the phrygana of Eftalou, there have been for donkey’s years (well, I discovered them in 2005) a few groups of Ophrys speculum, the Mirror Ophrys or, if you want, Ophrys vernixia ssp. orientalis, the Oriental Mirror Ophrys. A few years ago, on a very small track through olive – and pine trees, overgrown with Thorny Burnet (Sarcopoterium spinosum), very Thorny Wooly Broom (Calycotome villosa) and Spanish broom (Spartium junceum), I was following a trail (made by a tractor that went straight through the phryganae to reach a olive grove a few miles further on) when I discovered those small blue (but by then flattened) Mirror Orchids. A year later the municipality of Molivos made an agricultural road for the farmers so now they can reach their olive groves in a more decent way. Since then this quickly overgrown track is used by goats, horses, donkeys and for a few years, refugees. The first three do this for pleasure, I think; the refugees did it in the hope of reaching Europe, which is on Lesvos 70 kilometers away… well Mytilini is. And so ‘my’ blue Mirrors were again fit for the scrap heap. But what I’ve noticed the last years is that those Mirror Orchids went to the side of the path, more into the Thorny Burnett and the Shaggy Cistus (Cistus creticus). And this year I discovered a new spot in Eftalou were two beautiful Mirror Ophrys popped up, now on a more accessible habitat.

This orchid with his shiny blue lip will not give a lot of difficulties in terms of identification. It is the only species of this group of two growing on Lesvos (the other one, Ophrys regis-ferdinandii, King Ferdinand’s Ophrys, does not grow on Lesvos). And that is not only a pity, but also a little bit strange, because this ‘King Ferdinand’ is flowering on Chios, and that is, seen from the south of Lesvos, just a few miles across the sea. And also in Anatolia, on the peninsula of Cesme and in the neighborhood of Izmir, there are some species. But not in Lesvos, maybe it’s just a little bit too northerly! 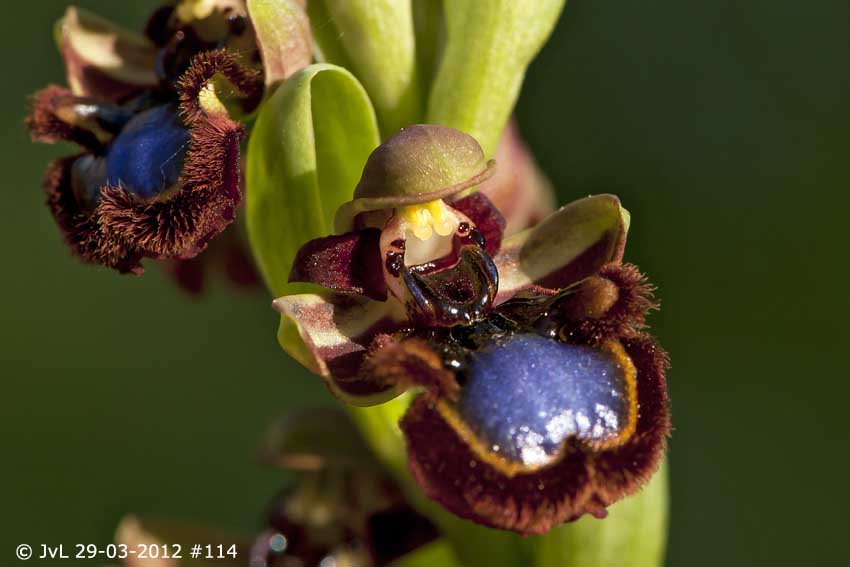 RESEARCH: So this time no difficulties in terms of determination but (again) difficulties in the ‘official’ naming of the Oriental Mirror Ophrys; you just have to look at all its synonyms. And why? For more than 180 years it was well known under the name Ophrys speculum Link 1799. So why rename this plant? All vanity? Or: ‘mirror, mirror on the wall, who is the best orchidologist of us all’? Well, let see who that will be.
In the end of last century the name Ophrys speculum suddenly changed in Ophrys ciliata Bivona because Bivona-Bernardi discovered the pollinating wasp: Dasiscolia ciliata. But in 2001 H.F. PAULUS proved that the eastern plants of Ophrys speculum are pollinated by Dasiscolia ciliata subsp. araratensis instead of Dasiscolia ciliate. That should also explain the darker appearance of the eastern species of Ophrys speculum. And that’s why this eastern species of the Mirror Ophrys had already been named Ophrys speculum ssp. orientalis by DEVILLERS-TERSCHUREN in their ‘Essai systématique de genre Ophrys’ (1994), but they didn’t give this species this new name. H.F.PAULUS filled up this vacuum with the name Ophrys speculum ssp. orientalis H.F. Paulus. 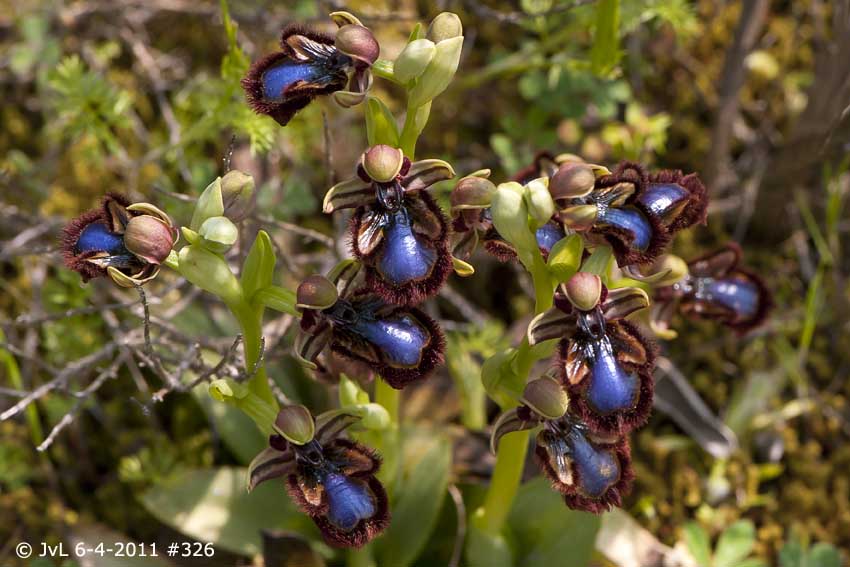 There was a period in which Kreutz, who still used the name O. speculum in his Turkey book (1998) re-baptized this species O. ciliata var. orientalis (H.F.Paulus) Kreutz (yes, look carefully at the infix var.) and in 2002 as O.vernixia ssp. orientalis H.F. Paulus 2001. In 2004 (in The Orchids of Cyprus’) he stated that ‘Ophrys ciliata = O. speculum’ was no longer present on Cyprus. And suddenly, between 2004 and 2012, ‘everybody’ went back to the old name Ophrys speculum Link, at least KRETZSCHMAR, H. & G. & Eccarius, W. (2004), DELFORGE (2005), TAYLOR (2012), ANTONOPOULOS (2009) and PEDERSEN/ FAURHOLDT (2007). But I think those last gentlemen didn’t came back from another name, because they still use Ophrys speculum ssp. speculum. (as in SUNDERMANN 1980). And also BAUMANN/ KÜNKELE/LORENZ (2006) suppose that O.speculum ssp. speculum is a more manageable name.
And yes, our ‘own’ KARATZÁ & KARATZÁ (2008) still uses Ophrys vernixia ssp. orientalis.

BOTTOM-LINE: Nowadays DELFORGE (Europe 2005) is of the opinion that ‘vernixia’ only occurs in Spain and Portugal, ‘speculum’ in the whole of the Mediterranean (but rare in Italy and France) and ‘var. orientalis’ (whose black of the basal field is extending to the sinuses of the lateral lobes; the speculum and the lip hairs somewhat darker) as an eastern variant. That has left us here on Lesvos again with two species and two choices: The more light-coloured Ophrys speculum and the darker, eastern/oriental growing, Ophrys speculum var. orientalis. To be honest, after again going through my entire ‘speculum’ photographs to find the differences, I give up: Please let it be just Ophrys speculum, in English: the Oriental Mirror Ophrys. And this English name is, I think, the name which suits this beautiful Orchid the best… pffft! 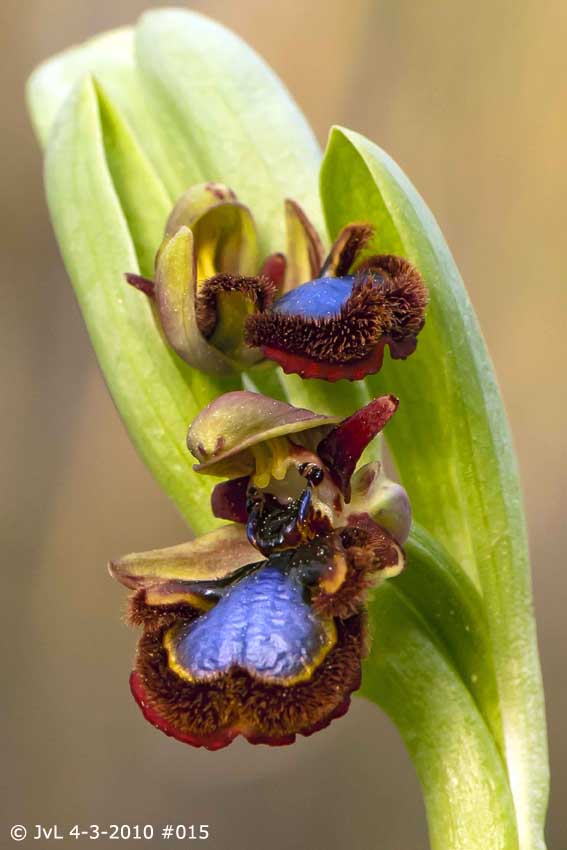 ETYMOLOGY:
Speculum = mirror (because of the shiny, reflective surface of the lip). 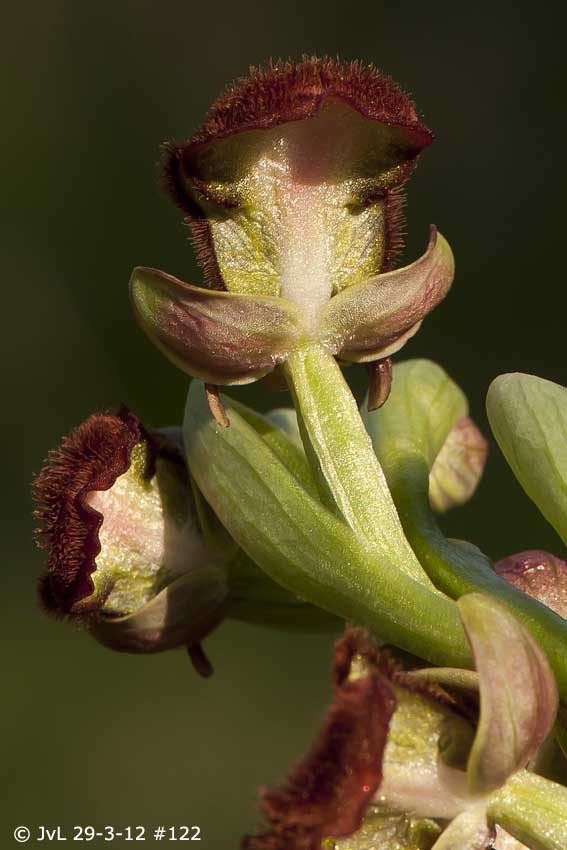 NAMES:
Link = Johann Heinrich Friedrich Link (1767-1851) was a German doctor, mineralogist, naturalist and botanist. In 1792 he became the first professor of the new department of chemistry, zoology and botany at the University of Rostock. In 1811 he was appointed professor of chemistry and botany at Breslau  university, where he was equally elected twice rector of the university. After the death of Carl Ludwig Willdenow in 1815, he became professor of natural history, curator of the herbarium and director of the botanic garden (Hortus regius Berolinensis) in Berlin until he died. This period became the most fruitful period of his academic life. He augmented the collection of the garden to 14,000 specimens, many of them rare plants. He is recognized as one of the last scientists of the 19th century with a universal knowledge. Link was also one of the few German botanists of his time, who aimed at a complete understanding of plants, through a systematic anatomical and physiological research. His most important work is the Handbuch zur Erkennung der nutzbarsten und am häufigsten vorkommenden Gewächse (three volumes, published between 1829-1833). (WIKIPEDIA)

C.A.J. Kreutz = Karel Kreutz, Dutch botanist, expert orchidologist and plant photographer. Kreutz is already more than 30 years occupied with the wild growing Orchids of Europe and its neighboring areas and published tens of articles and books about those plants. 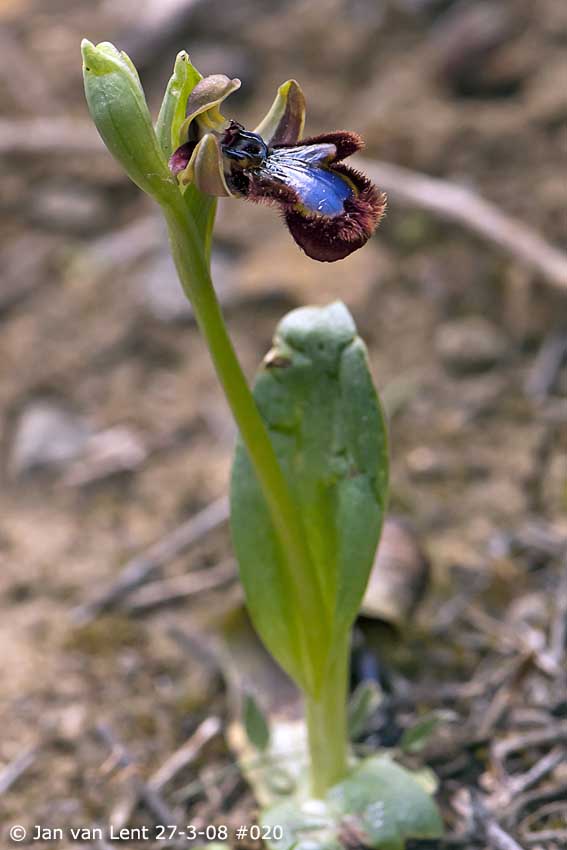 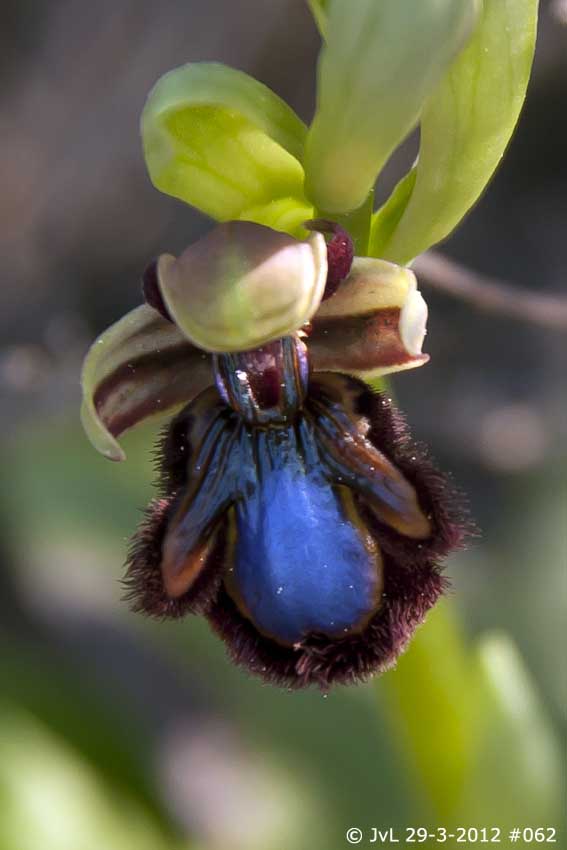