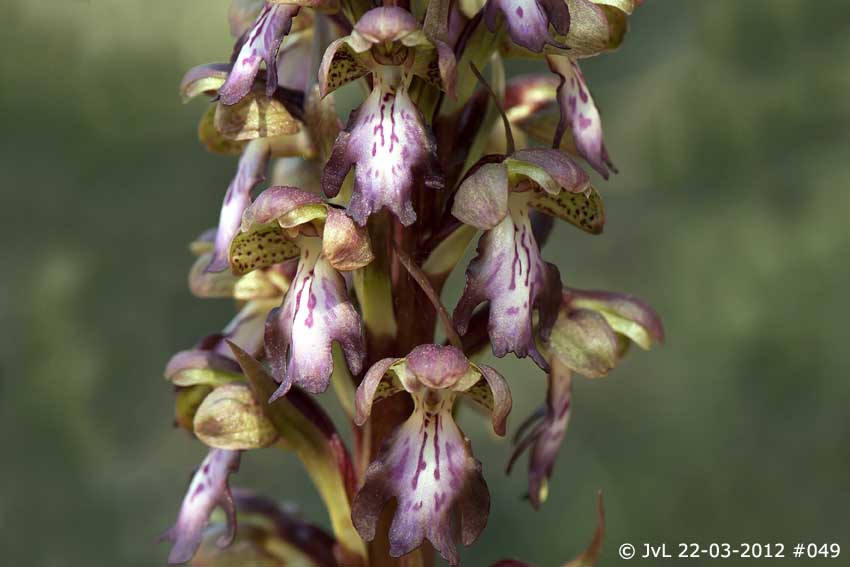 I don’t know what it is this year. I go out for an orchid hunt and find nothing, or like today only ONE Orchis papilionacea. Of course, this is a very nice orchid, but to fill a blog with one Butterfly Orchis after all my visits to Ophrys mesaritica is a little bit disappointing, I think. And I want to do deal with Orchis papilionacea in another location, where I found beautiful, big, and also white papilionacea in recent years.

HABITAT: I decided to try my luck at Mt.Gerania. Mt.Gerania you think, Geranium? Stork’s bill? Well, Mt.Gerania is a beautiful mountain somewhere between Kalloni and Mytilini. And yes, there are hundreds of hills between those two cities. To be more precise; drive up a small track on your left directly after the turning to Plomari on your right and follow it to the end, where a farmer has blocked the way to ‘protect’ his sheep. So no driving over the hilltop and arriving (via Mt.Spathi) on the other side of Lesvos, at Loutropoli Thermís. No, you have to turn around and drive or walk back downhill. And going down from up is not the same thing as coming up from down, you see different things from a different angle. So last year when I went down after a very successful Orchis hunt, I saw out of the corner of my eye a big reddish orchid behind a fence. And what could that be? Yes, a real Barlia robertiana or with its other name: Himantoglossum robertianum. In English: the Giant Orchid or Robert’s giant Orchid. According to the few orchidologists who ‘did’ Lesvos in February or March, this plant should be standing alongside the track between Mytilini and Loutra. Three long years, between the middle of February and the end of March, I drove this track up and down and I never found this Giant ‘Roberts’ Orchid. And then here it was, on a track in the middle of April last year. I was flabbergasted! This Orchid should, according to the books, be flowering in February or the beginning of March! Of course I climbed up (that was not easy, the bank was very steep) and started to take photographs. But this fence… Okay, I removed the fence (after first very carefully listening in case there was a farmer coming along the road with his pick-up truck) and (while slipping down on my stomach, hanging on to the corroded fence with one hand) I made tens of photographs. By the way, the fence I replaced properly. 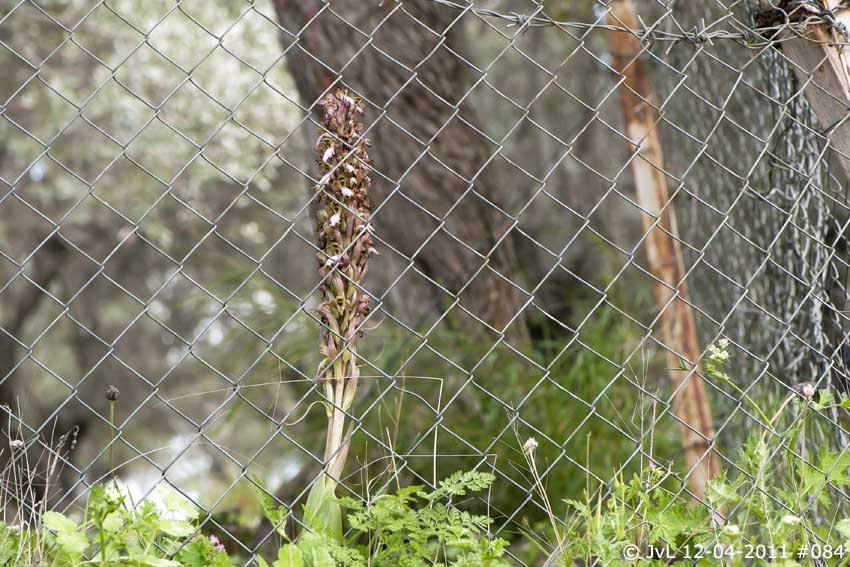 HUNTING: So, I knew where to go and look this year. On the spot along a small and already dry creek where I found last year a variety of beautiful Orchids, there was nothing to see or photograph. Oh yes, one very big rosette of an Ophrys from the Oestrifera group (the former fuciflora and scolopax groups). So over two weeks I have to come back and do it all over again… I do it all over for you. (From who was this song again?). But after this disappointing intermezzo I drove straight uphill to ‘my’ Giant Orchid. And yes, there it was, one month younger, still behind the fence, waving at me. I put my car directly under it, stepped out of my car, looked to make sure there were no farmers around and I saw another Giant Orchid, standing ten meters away, directly in front of me, no fence, no climbing needed. So I ‘shot’ this one. 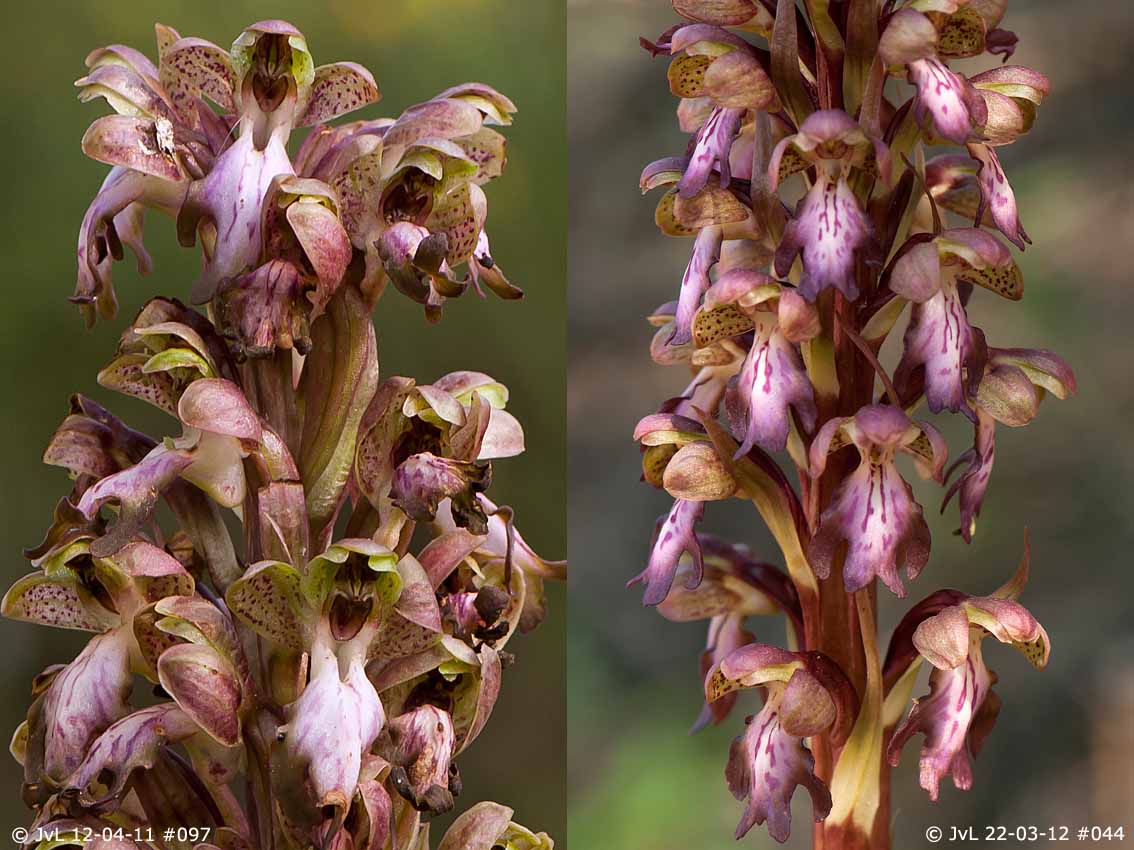 RESEARCH: There is not so much to tell about Barlia or Himantoglossum robertiana, except of course about its name. No fights between the experts about its colour (from whitish-green to pinkish-red) its size (between 40-80cm) or the expression on its face. It is not a rare Orchid because it is distributed throughout the whole Mediterranean region, from Portugal to Turkey. No, only the name can lead to some tug-of-war. Should it be Barlia robertiana (Loiseleur) Greuter or Himantoglossum robertianum (Loiseleur) Delforge? Therefore, are we behind the Germans (Okay Swiss, but he was the last 30 years Professor in Berlin), as in GREUTER or behind the French (okay Belgian), as in DELFORGE? It really feels European this choice, like: are we behind Merkel or in ‘faveur’ of Sarkozy? But the remarkable thing is that G. & A. KARATZÁ (Lesvos, 2008), Greek nationals from Lesvos, go for Germany; for them it is also Barlia robertiana…
So DELFORGE (Europe 2005) made his point, but at the moment he and TAYLOR (Chios 2012) are the only orchidologists who renamed Barlia into Himantoglossum. And because Delforge is a splitter he splits Himantoglossum in another 3 groups with 8 species and 2 hybridogenous taxa ‘of uncertain status’: the H. comperiana group, the H. robertianum group & the H. hircinum group. And on Lesvos we are in the lucky position that we have 5 of the 8 species and 1 hybridogenous taxa of those 3 groups.
The KRETZSCHMAR’s & Eccarius (Crete & Dodecanese 2004) are not of his opinion, for them it is Barlia robertiana. ‘the plant is close to the genera Himantoglossum and Comperia, but in contrast to these species it is early flowering.’ But their book was published before DELFORGE, so they still can change their minds…
And also for BAUMANN/KÜNKELE/LORENZ (Europe 2006) it is still Barlia robertiana: ‘the early time of flowering, the short split-up middle lip and lack of hybrids speak against a merge with Himantoglossum’. And their book came out after DELFORGE.
For SUNDERMANN (Europe 1980) it was unarguable Barlia robertiana. ‘A monotypic species with a broad distribution and only insignificant relations to Orchis or Himantoglossum; it makes no hybrids’.
And also KREUTZ (1998, 2002, 2004) goes in all his books for Barlia robertiana. He does not explain his vision or decision for this name.

BOTTOM LINE: In my opinion (and for the comprehensibility of things) we can change Barlia into Himantoglossum and robertiana into robertianum. Why? Because I think it shares the same characteristics with the other members of this group (read DELFORGE p.348), but it is the drawing from the herbarium of E. Nelson & P. Delforge (see DELFORGE 2005, p.351) that really explained for me why they are related and why he puts them in 3 groups under the name Himantoglossum. 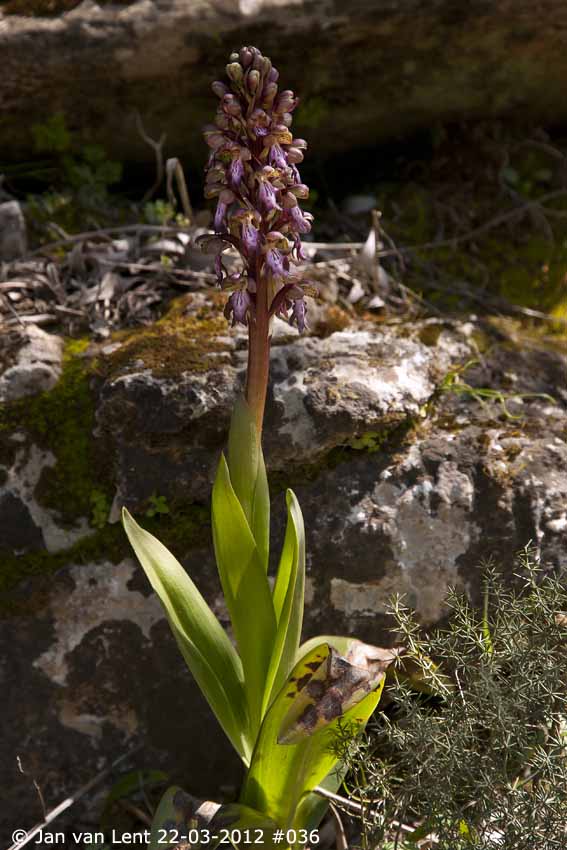 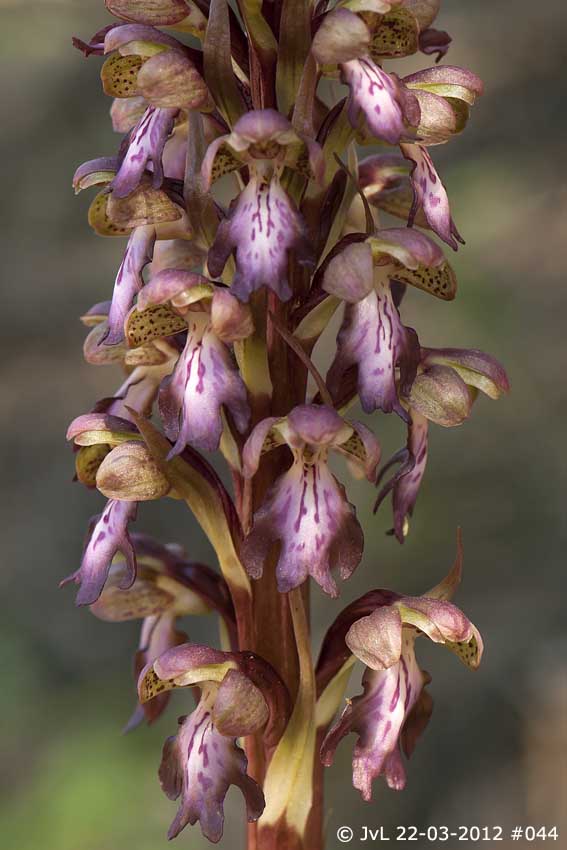 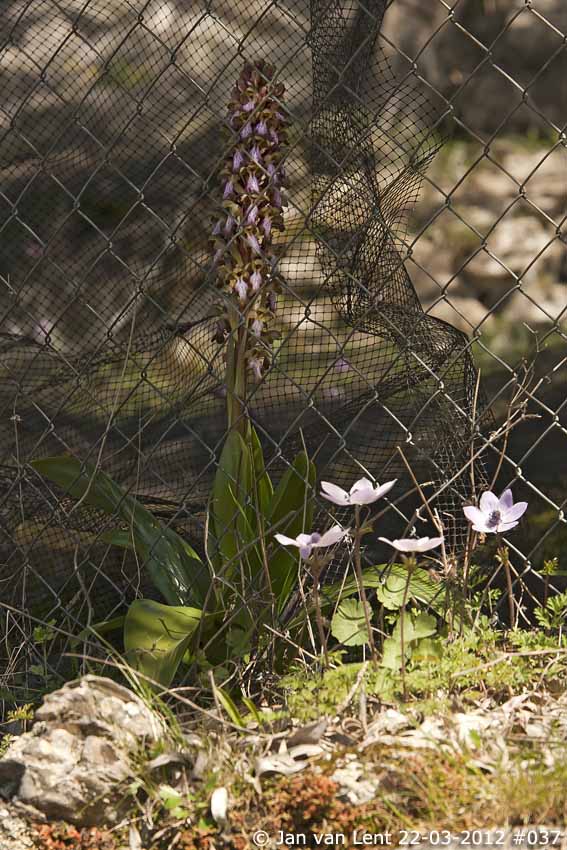 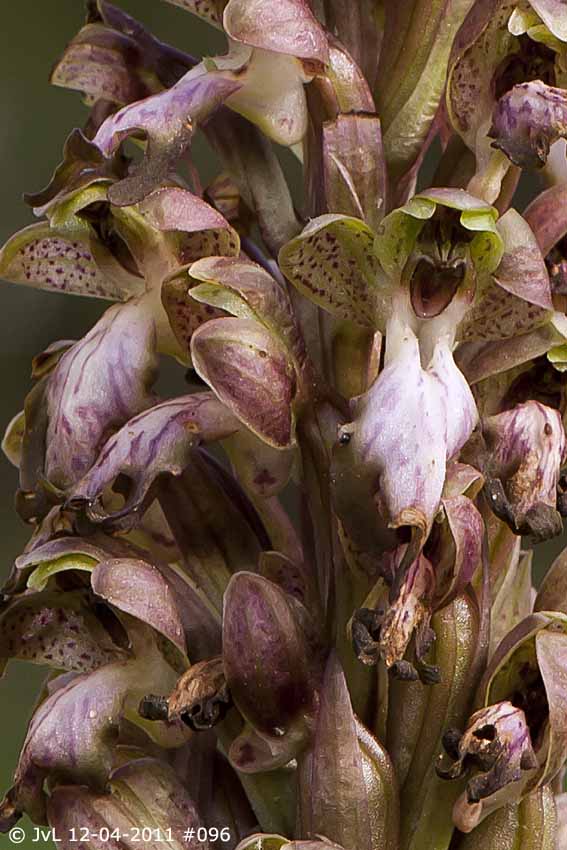 NAMES:
Professor Dr. Werner Rodolfo Greuter, (1938- ) is a prominent Swiss botanist. He was founder, first secretary General, later President, for the Organization for the Phyto-Taxonomic Investigation of the Mediterranean Area (OPTIMA) and for a research project to provide an inventory of all the vascular plants of that area, the MED-CHECKLIST. In 1988, he co-founded the Flora Hellenica project. He is well-known as the chair of the Editorial Committee for the International Code of Botanical Nomenclature (ICBN). He was appointed in 1978 to Professor of biology in the Institute of Biology at the Free University of Berlin, Germany, and First Director of the University's Botanic Garden and Botanical Museum (BGBM) in Berlin. He retired in 2006. In 1967 he changed after 161 years Loiseleur’s name Orchis robertiana into Barlia robertiana (Loiseleur) W.Greuter. 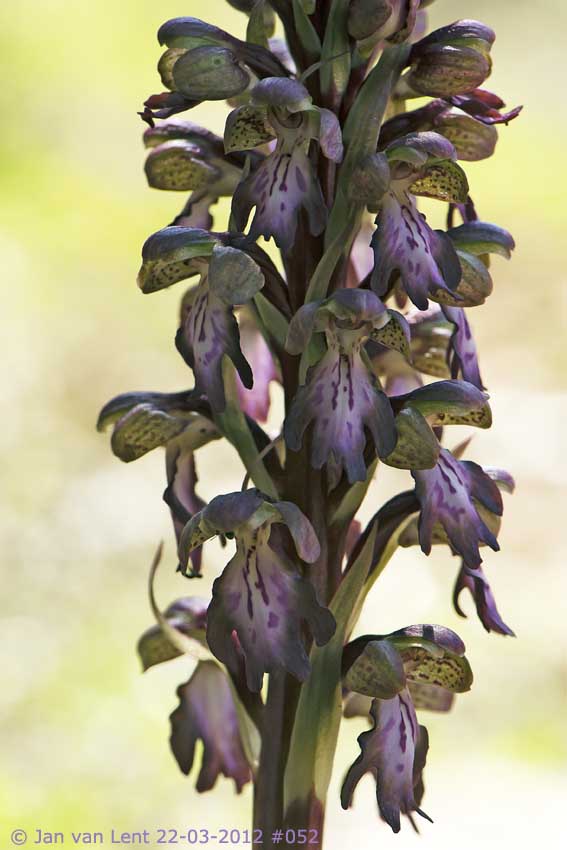 KEW World Checklist of Selected Plant Families. Facilitated by the Trustees of the Royal Botanic Gardens, Kew. Published on the Internet; http://apps.kew.org/wcsp/