HUNTING: Every time I go out hunting in this beautiful Pine forest around Ag. Amalí at the end of May or in June and I see a big, pink flower appearing between the trees, my heart stands still for a moment. Because in this first moment I think: Ah finally, Cephalanthera rubra! Because for years I’m now hunting for the Pink Cephalanthera on Lesvos: at Amalí, above Megalochori, the mountain above Mytilini and between Neochori and Plomari, following the descriptions from the ‘big’ BIEL* (1998), but all in vain.

HABITAT: Well, not completely in vain because at the end of May (27-5-2013) I saw this beautiful Pink Limodore shimmering through this ‘black’ forest. A little bit back, at the Panagia Amali, the Violet Limodores were already completely withered and looked again like immense Asparagus. Those ‘normal’ violet Limodorum abortivum are flowering everywhere on Lesvos, but one or two weeks earlier. This time I went to Amalí to photograph the three sister Epipactis: turcica, densifolia and helleborine (see blog 16: ‘River deep, mountain high’) and of course to look for the Pink Cephalanthera. I knew that the Red Limodore was flowering around Amalí because I already photographed this variation  two and four years ago. Those had a lot of flowers and were not standing alone but accompanied by others. The two Red or rather Pink Limodore I found today were different: one was tall (#181-189-203), had a lot of flowers (the half already withered) but was a ‘stand alone’; The other one (#206-209-210) was also standing alone but was relatively small, had only a few flowers and was very elegant. This one looked to me more like a Delicate Pink Limodore: Limodorum abortivum var. rosea f. gracile. 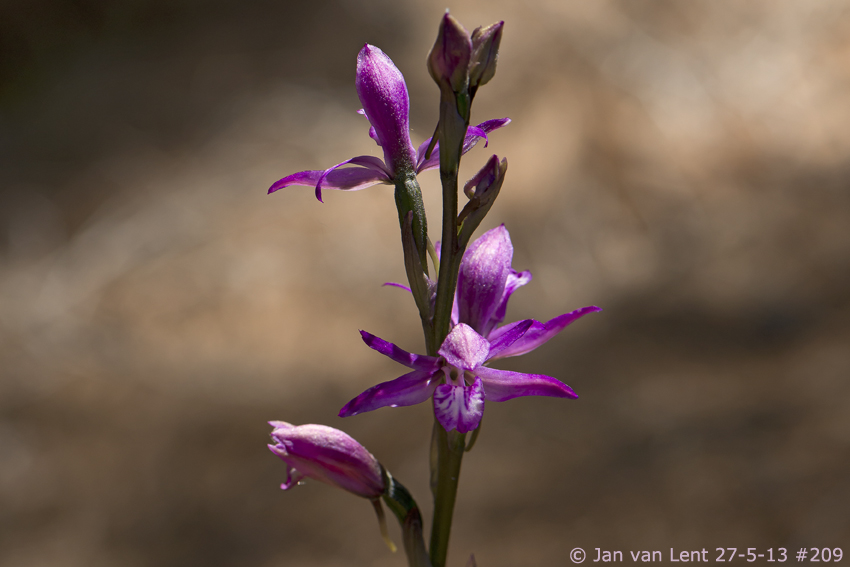 RESEARCH: There is not so much to research on the distribution of Limodorum abortivum because the plant flowers in almost the whole of Europe, from the Benelux countries as far as Cyprus and Turkey, and from France to the Krim and the Caucasus.
And because I went through all of my Limodorum photographs of the last 7 years I see that it is hard to find a real Violet Limodorum, I see purple, pink, yellowish, almost blue ones and a lot of two-tones: yellowish-violets and reddish-pinks. So let’s research all those colours of Limodorum abortivum, the Violet Limodore. 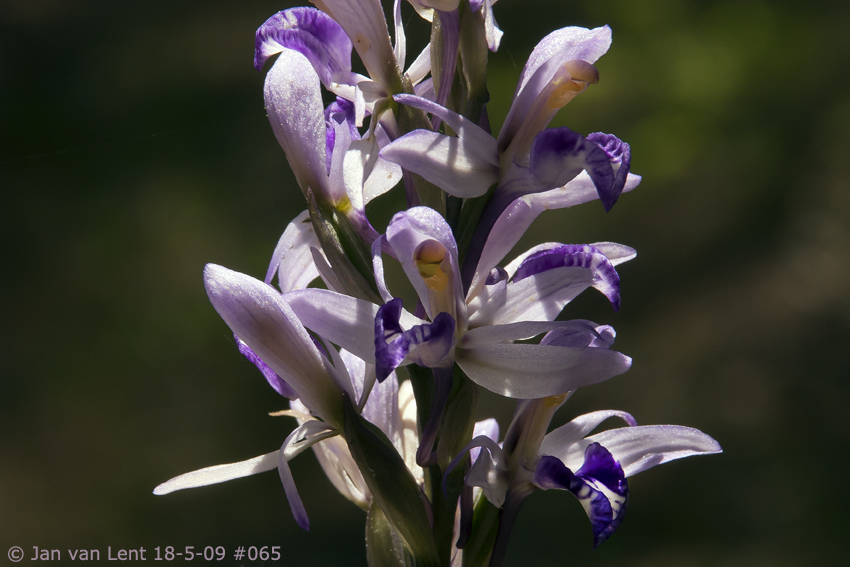 Well, that was a quick one:  SUNDERMANN (Europe 1980) describes Limodorum abortivum var. rubrum from Turkey: ‘flower colour red (carmine red).’ Carmine red?
I see pink!
KREUTZ (Turkey 1998) describes Limodorum abortivum var. rubrum from ten spots in Turkey. He points out that it is observed on Cyprus (MEIKLE, 1985), on Rhodos (TAUSCH 1995 & KRETZSCHMAR 1996) and on Lesvos (BIEL 1998).
KREUTZ (Rhodes & Karpathos 2002): ‘Besides the normal type, two striking colour varieties of Limodorum abortivum occur on Rhodes, one with red and one with purple-coloured flowers.’ But a red coloured variant was upgraded to species by the Italians BARTOLO & PULVIRENTI (1999): Limodorum rubriflorum. I don’t think that KREUTZ was very happy with this: ‘This is quite astonishing and not justified’.
On Cyprus (KREUTZ 2004): ‘There is no evidence available for the existence of this variety (var. rubrum) on Cyprus. Plants with very deep purple flowers however do occur on Cyprus.’

DELFORGE (2005) believes that the red variant from Anatolia and Cyprus should be named L. abortivum f. rubrum Rückbrodt; ‘a variant lacking evolutionary significance.’  ‘f.’ means form or variant, not variety. He has also Limodorum abortivum f. gracile in his stable, ‘spindly, 10-30cm tall, paler and smaller in all parts, flowering a little earlier (May). Known from a few stations around Megalopolis (Gr, Arcadia).’ Well, I don’t know those plants from Megalopolis but I certainly saw a lot of those ‘graciles’ on Lesvos. DELFORGE describes 3 other varieties: Limodorum abortivum var. trabutianum (Battandier) Schlechter 1886 with a very short spur (or none at all), half opening flowers which are standing vertically upright and pale purplish-green stems with numerous dark violet streaks. This variation appears rarely and sporadically in the western half of the range of L.abortivum; var. ‘thracum’ from Thrace (Gr.) with a very narrow lip and a 1mm long spur; var. ‘brulloi’ with a lip weakly divided in hypochile and epichile from Calabria (It.) 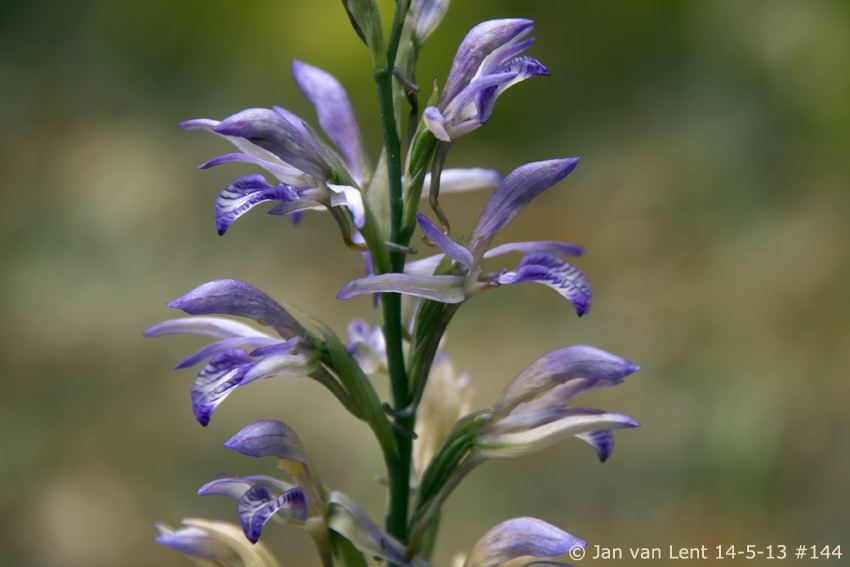 Those variations are also described by BAUMANN ET AL (2006), they have the better photographs and yes, they did it again: Limodorum trabutianum subsp. brulloi (BARTOLO & PULVIRENTI) H. BAUMANN & R. LORENZ, bravo!

But it are not only Italian orchidologists who invented new names. Our own KARATZAS (Lesvos 2008) also invented some, like Limodorum abortivum var. albiflorum. It is a lighter version (or completely white, but his photographs are maybe somewhat overexposed or bleached out in print) from Amalí. Maybe it was the one I photographed on the 28th of May 2011 (#065).

PETROU ET AL. (Greece 2011) choose for the variations ‘rubrum’ and ‘gracile’, so not the ‘f.’ version from DELFORGE. But with their description of those variations they did follow Delforge. But instead of going for Limodorum abortivum (L.) SWARTZ var. ‘thracum’ (BATTANDIER) SCHLECHTER like DELFORGE did, they choose to follow PRESSER: Limodorum trabutianum BATTANDIER subsp. thracum PRESSER. So a real ‘trabutianum’ species, not a variation anymore. On Lesvos I never encountered Limodorum trabutianum or one of its variations or subspecies, nor did anybody else.

BOTTOM-LINE: So the Greeks did well not to give any colour to the Greek name for Limodorum abortivum: Limódoro to ektrotikó (Aborted Limodore) and Xiloloúlouda (Wood flower). I also saw the name ‘Asparagus orchid’ in passing. And in my opinion there are (at least on Lesvos) two different variations of Limodore: the elegant plant with only a few flowers (gracile) and the flowery one with tens of flowers on the inflorescence (fiorito or fiorato, floralia, multiflori, densiflora or densiflorum to stay in the Italian & Latin languages). And then just add colours to them. You can choose any colour you like … as long as it is pink! 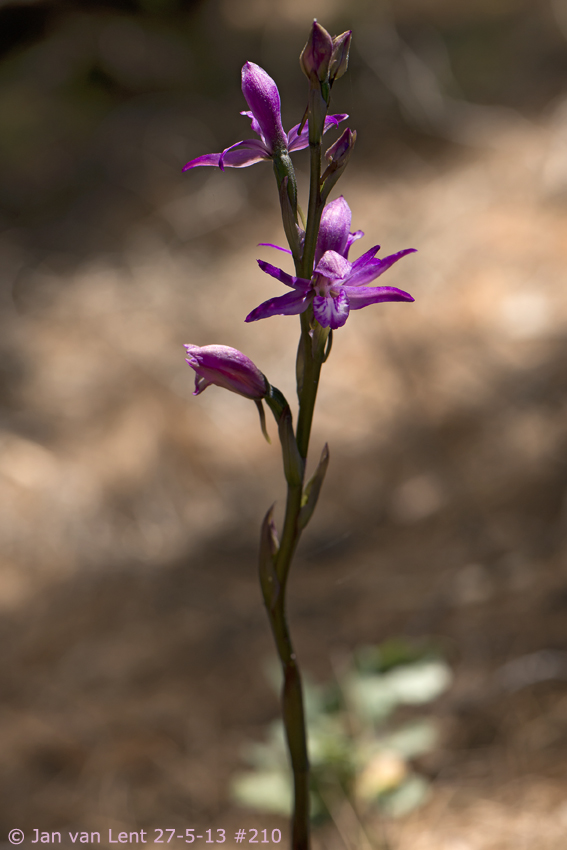 ETYMOLOGY: Liemodôron: a name used by Theophrastus (Lesvos), probably for broomrapes (Orobanches); abortivum: aborted (a reference to leaves that are aborted, i. e. reduced to small sheaths). 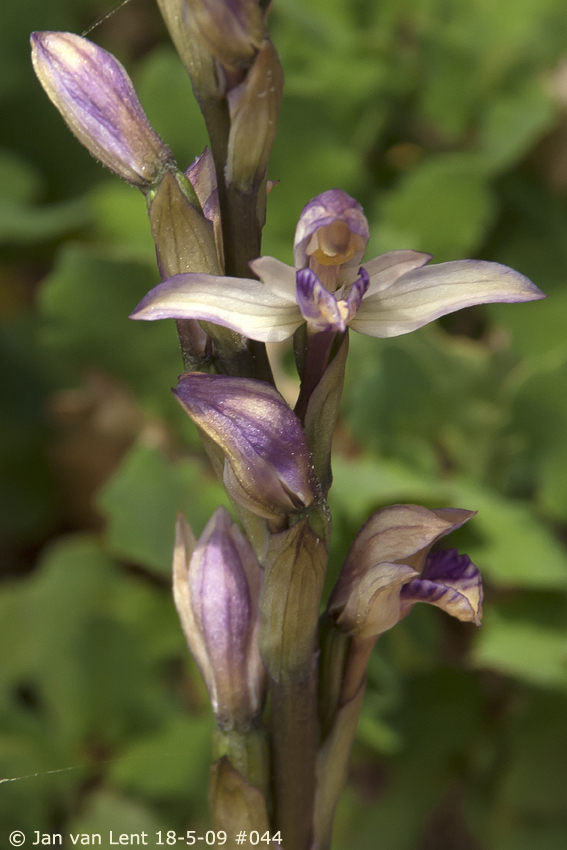 NAMES: Peter Olav Swartz (1760-1818) was a Swedish botanist and taxonomist. He is best known for his taxonomic work and studies into pteridophytes (Ferns). He attended the University of Uppsala and received his doctorate in 1781. In 1783 he sailed for North America and the West Indies, primarily in the area of Jamaica and Hispaniola, to collect botanical specimens. His botanical collection, of an impressive 6000 specimens, is part of the Regnellian herbarium. In 1791 he became Professor at the Academy of Sciences at Stockholm. Swartz was the first specialist of orchid taxonomy, who published a critical review of orchid literature and classified the 25 genera that he recognized through his own work. He was also the first to realize that most orchids have one stamen, while slipper orchids have two. The genus Swartzia was named in his honor by Schreber. (Source: Wikipedia) 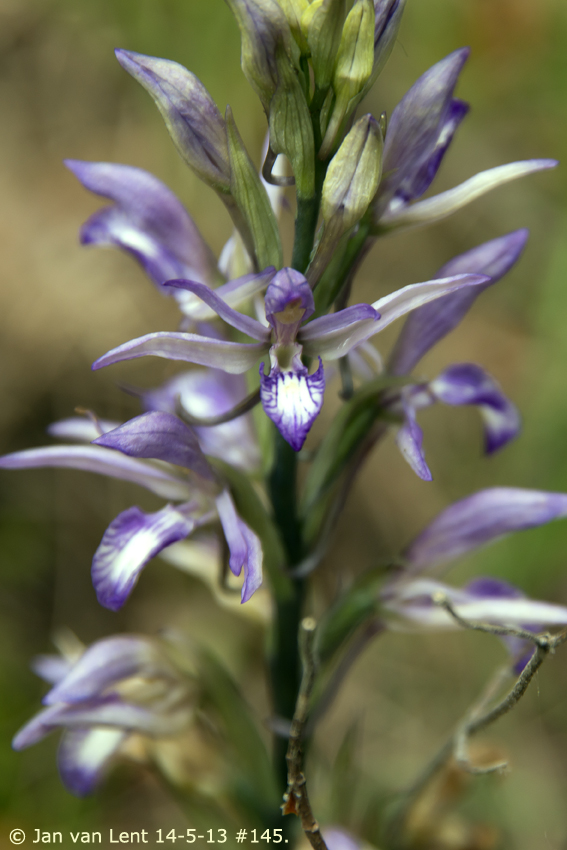 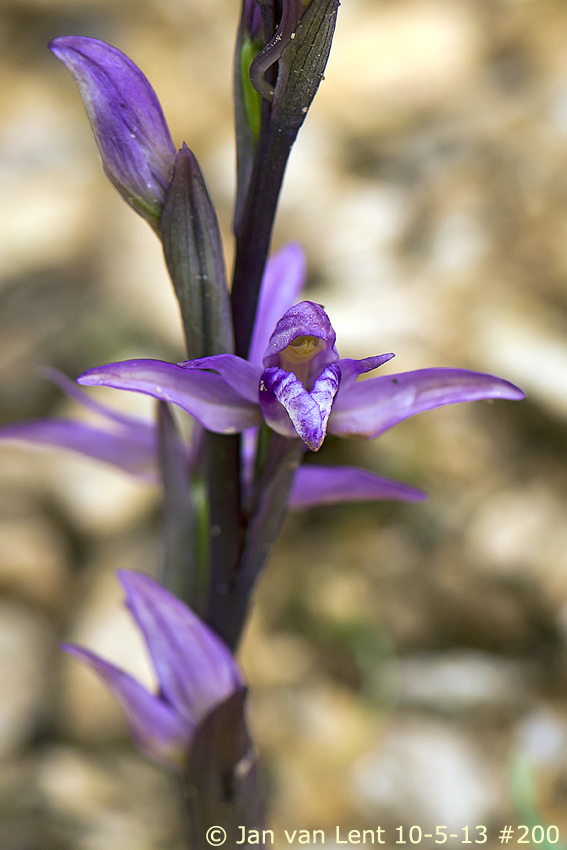