HUNTING: Yes, I knew where to go and yes, it still took me hours to find this orchid which was just standing in the ditch next to the road, clearly visibly to whoever passed by… But my excuse is that I had to slither three times down from a steep slope because it started raining & thundering and because I found tens of different big oestrifera-family members which I also wanted to measure up and photograph! So, again another find by the Crossbill Guides Guys & Girl: Alex, Dirk and Christiana (www.crossbillguides.com/). And after this I gave them my list of all ‘vanished’ orchids of Lesvos, maybe they can find what ‘nobody’ else could. 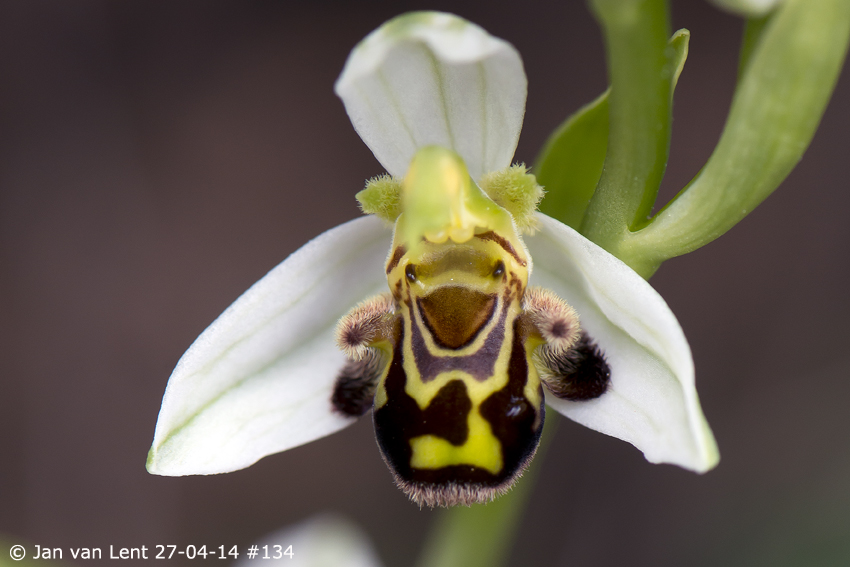 But before I could finish this blog I went back to the Mt. Fouga oak forest in the neighbourhood where I found Orchis purpurea (see blog 35 ‘Purple Haze’: www.janvanlent.com/blog/?p=2819.) before a possible Cephalanthera damasonium could be eaten by the goats from a nearby farm. And guess what we found there: three (3) Ophrys apifera in full bloom, and now the pink version!

RESEARCH: What is this? Years of searching in vain on Lesvos for this Bee Ophrys whilst almost the whole world stumbles over it: in nearly all of Europe, in the Balkans, in mainland Greece and on the islands Chios, Samos, Crete, Karpathos, Rhodos and even Cyprus; everywhere it grows in abundance, that’s what I read. PETROU (2011): ‘A rather common species often forming large populations’. ANTONOPOULOS (2009): ‘A broadly-distributed Mediterranean species, found all over Greece.’ But not on Lesvos, Gentlemen!
The last time somebody put into the archives that they actually saw them flowering on Lesvos was BERGFELD & BERLINGHOF on 26-05-2009, north of Megalochori. Apparently they saw thousands of O.apifera in Germany because they didn’t make a special note of it, but they did made a note that they didn’t find Cephalanthera rubra there.  I mean, I don’t want to know where you don’t find C. rubra, that’s probably on the whole island; I want to know where you DO FIND C. rubra!

Before this notation it was again BIEL (1998) on the 30th of May 1996 and HANSEN & NIELSEN who found two Ophrys apifera on the 5th of June 1992 (!) around Megalochori. Also KARATZÁ (2007) painted this area -and a small area around Nées Kidonia where I searched for years – red in his book ‘Orchidées, Agrioloúlouda tis Lésvou’. That was it. Even DEVILLERS ET AL (2010 & 2012) missed this Ophrys (and Orchis purpurea) in their meticulous search for new names during their three visits to Lesvos (April 1990, April 2003 and April-May 2010).
The author of this orchid, HUDSON, was also the author of Orchis purpurea, our previous find on the island. (see blog 35: ‘Purple Haze’.) I never heard of Hudson before I wrote that blog. It was also hard to find something about him on the internet, this in spite of the fact that he is the author of the famous ‘Flora Anglica’ published in 1762. And that I didn’t know about him had also to do with the fact that both orchids – Orchis purpurea and Ophrys apifera – are also West European orchids and described (in this case) in England. 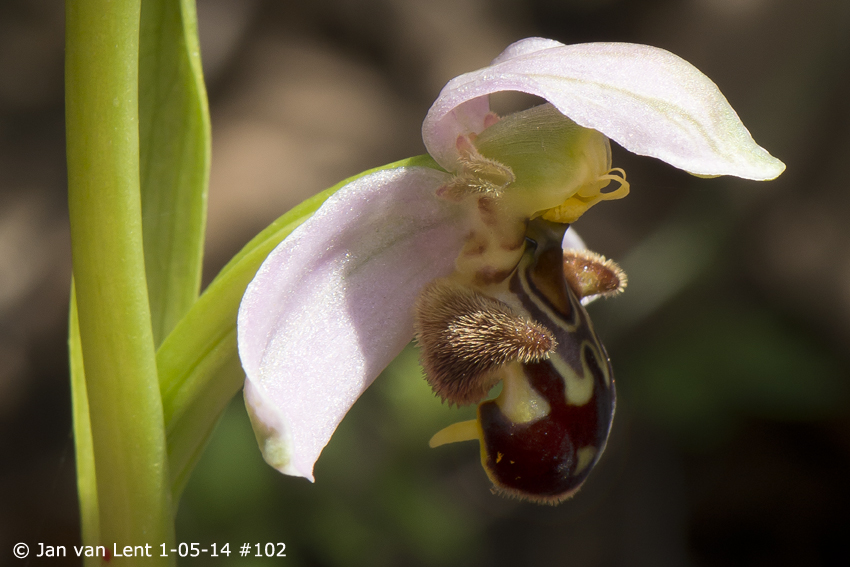 BOTTOM-LINE: Those hills above the 5 villages (Paleokipos, Plakados, Papados, Messagros & Skopelos) on the Gulf of Gera at the middle lobe of the island are not as thoroughly searched as they should be: you always get lost in those villages before you get to where you want to go to. Was that why Redbeard the pirate – ‘Barbarossa of Lesvos’ – lived here centuries ago? (SMIT & VAN LENT: ‘Scatterlight Donkeys & Foxballs Ice Cream’, Lesvos 2011). And is this red beard under the lip of Or. apifera a reference to… O, okay, so maybe not. Apifera means literally ‘bee bearing’ but we can easily make a slip of the tongue: ‘beard bearing’: Ophrys barbafera or barbarossa DEVILLE… Sorry! But actually it will fit in very well in their series ‘Famous Orchids of Lesvos’: Ophrys theophrastus, Ophrys sappho, Ophrys barbarossa. 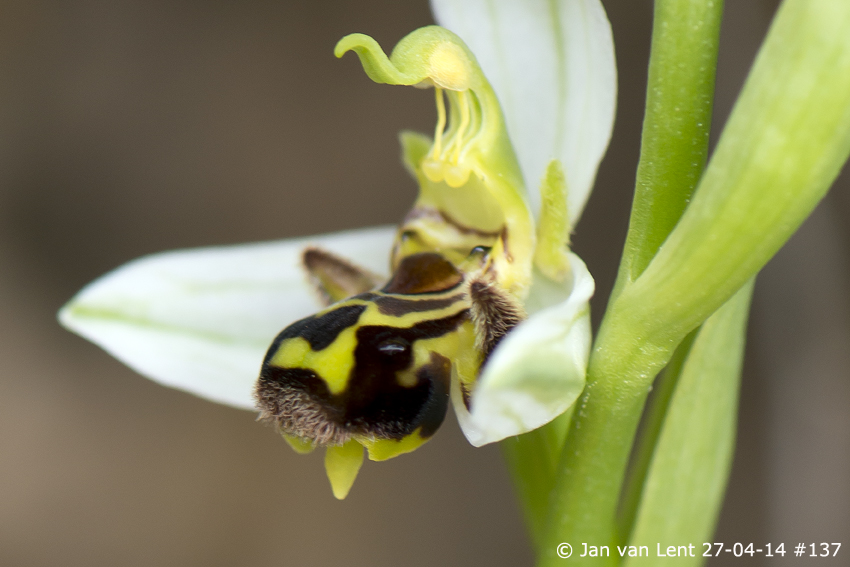 Maybe I’m just amazed that for the first time I saw white smoke coming out of the orchidologists chimneys… Everybody, even PEDERSEN & FAURHOLDT (2007) and KEW agreed with the name, author and date of description of Ophrys apifera Huson 1762.
So what else is there to say about this Ophrys: O Yes, it is also self-pollinating*. But nobody could tell me why this ‘prickle’ (a more or less downwards pointing rhomboid appendage) is on its ass…

So no, not the P. McCartney/Wings version, and no, not the Grohl & Jones version with the Obama’s and Oprah Winfrey applauding for and to Sir Paul McCartney in 2010. But  I am amazed by the Will Lee version of ‘Maybe I’m Amazed’!
https://www.youtube.com/watch?v=-bSDRQdB_co

*Ophrys apifera is an isolated species, mostly but not exclusively self-pollinating wrongly held to be monocarpic (a plant that flowers only once and then dies after producing seeds). The pollinia, whose long caudicles wither only a few hours after the flower opens, drop from the loculi and fall onto the stigma at the slightest touch. (DELFORGE)