HABITAT (Continued from Blog 9): So here I am, on a path high above Liota and Gavathas, walking to the end of the track to look for a place to turn my car, as I saw on the sides and also in the middle of the road tens of species from the oestrifera group. When I had a closer look I was astonished and I decided that almost the whole oestrifera group was present here, including the long horned Ophrys oestrifera and cornutula, the very small Ophrys minutula and maybe a late Ophrys dodekanensis. Or was this the new (Chios) orphan from Saliaris and Delforge: Ophrys orphanidea? 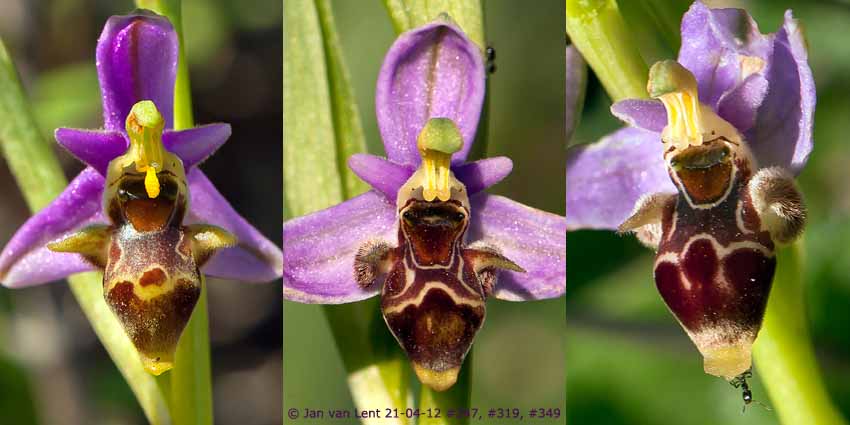 The whole of the oestrifera group is already in the final stage of flowering on Lesvos and I still didn’t ‘do’ Ophrys dodekanensis, the first of this group to flower in March and the beginning of April. This oestrifera group is actually a pain in the ass because they are very tiny: you have to lay down with your nose on the ground to discover, identify and photograph them. And no help from the books and the web here because most orchidologists already decided for Lesvos: no Ophrys dodekanensis, but also no ceto, no cornutula, no oestrifera, no bremifera and no phrygia… only Ophrys minutula and maybe the two ‘new’ Ophrys from Delforge & Saliaris Ophrys orphanidea and Ophrys masticorum.

So, only one, maybe three species of this group are flowering on Lesvos? But if I compare the species I found today on this spot above Liota, I get a completely different picture. And comparing is one thing; distinguishing them from each other, another. If you think: ‘Yes, I see the difference’, you find another species with the wrong arms but with the characteristics of an earlier or later species. Or at the wrong time and the wrong place… The difference between the members of the oestrifera family is not only the flowering time (because this can vary one month due to winter/spring conditions), but also the length of the side horns, the colour and form of the face (stigmatic cavity) and the pseudo-eyes, the colour, length and form of the sepals and petals and the shape and length of the lip. But let’s see what  we have here, on the 21st of April above Liota.

RESEARCH: On the two ‘new’ species Ophrys orphanidea and masticorum there is not so much to research in my books because only TAYLOR (Chios 2012) and ANTONOPOULOS (2009) have photographs from Chios and described them. Antonopoulos -Ophrys orphanidea- : ‘A plant of little height, with a thin inflorescence. The sepals (the wings) are large in comparison to the lip, which has a length of 6-9mm and is characteristically rounded to globose at the distal edge. The stigmatic cavity is large and dark-coloured in contrast to that of Ophrys dodekanensis.’
TAYLOR (Chios 2012): -Ophrys orphanidea- : ‘Described as a new species. These plants had previously been indentified as O.bremifera, oestrifera, cerastes or scolopax. Widely distributed and frequent in western and southern Chios. -Ophrys masticorum- : ‘Described as a new species (see above). ‘This species seems to tolerate hot dry habitats, exhibiting a large range of plant sizes, being very small in such situation and much larger and robust for example at the type locality in Pyrgi.’

On the internet I get more information and photographs. On John & Gerry’s Orchids of Britain and Europe (www.orchidsofbritainandeurope.co.uk): ‘O. masticorum is the species that is most likely to be confused with O. orphanidea and for good reason – it is very similar! The sepals on the former tend to be larger and the dorsal sepal more strongly inclined forward. The body of O. orphanidea is fuller and the speculum more complex. 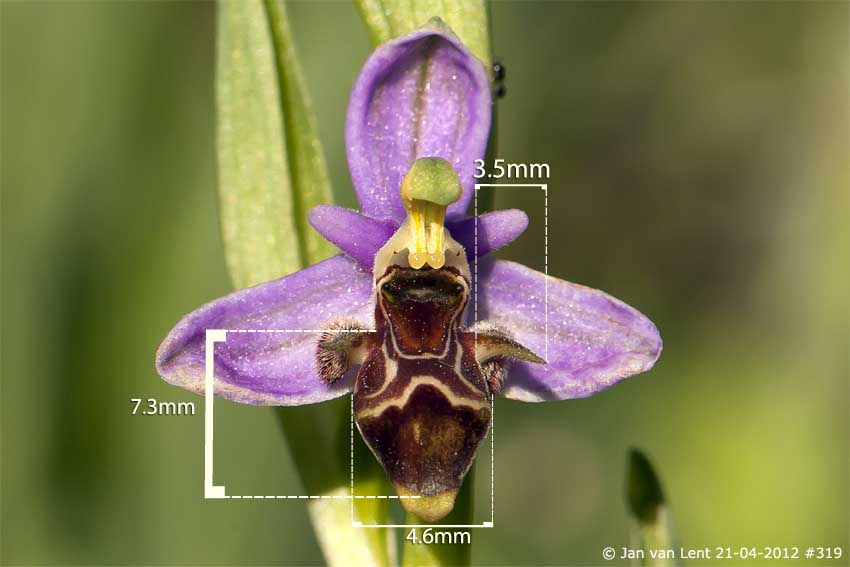 If you go to the website of JAMES MAST DE MAEGHT: (www.ophrys-genus.be), you get a lot of information and photographs of every oestrifera species ever found including Ophrys orphanidea and Ophrys masticorum (but also an Ophrys Sappho! from Lesvos d.d. 2010.) 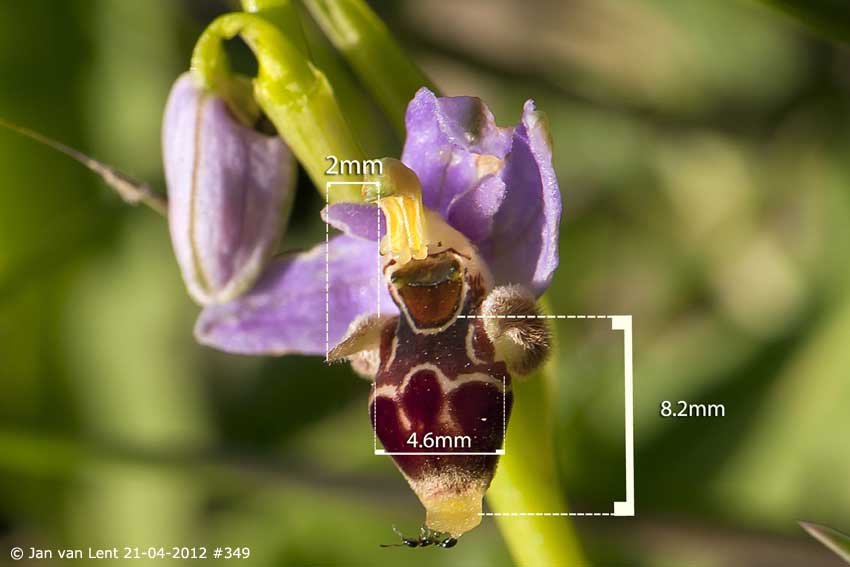 John & Gerry’s Orchids of Britain and Europe: ’Ophrys masticorum can be variable but obligingly demonstrates three key features, which in combination, point fairly conclusively to its identity. 1:- Large sepals; 2:- Dorsal sepal strongly inclined forward in a very similar way to O. lapethica; 3:- The lip slopes sharply down and in from a waisted middle lobe.’
ANTONOPOULOS (2009) description of Ophrys masticorum: ‘A slender but tall plant with numerous (5-15) flowers in a thin inflorescence, with a characteristically long ovary. The sepals are long and the dorsal sepal almost always curving over the connective. The lip is small in relation to the sepals, with a length of 7.5 – 10.5 mm and exhibits a strong, downwards curvature.’

So let’s do a real Lesvian species (Ophrys minutula, for the first time described as endemic from Lesvos by Gölz & Reinhard in 1989, but nowadays present in almost the whole Eastern Aegean region). 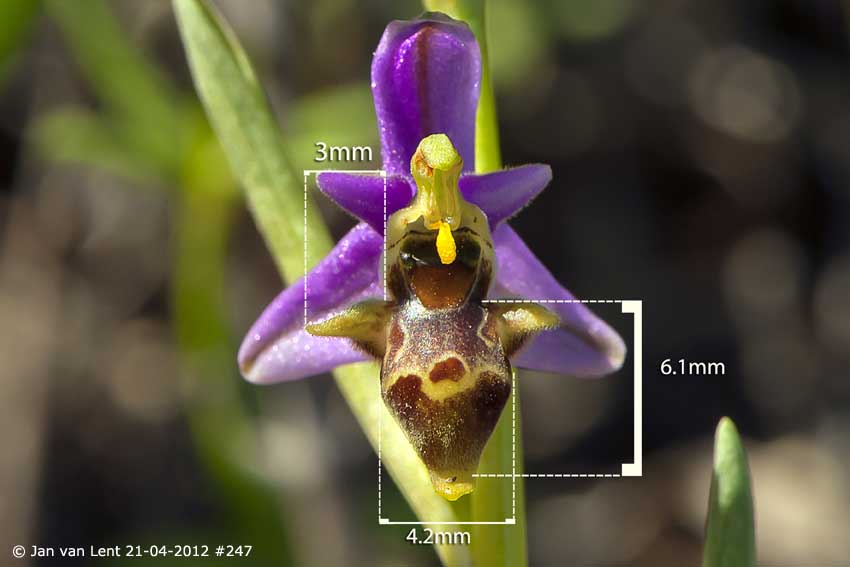 ANTONOPOULOS (2009) about Ophrys minutula: ‘Its main characteristics are the sepals which turn strongly backwards, the late flowering time*, and the length of the lip which is particularly small, i.e. 6.5-9mm…., and the very small length of the lateral lobes (the horns, JvL), from 1 to 3 mm…’

Already in 1998 KREUTZ didn’t use the names Ophrys fuciflora, Ophrys scolopax or Ophrys scolopax ssp. scolopax, the accepted name for this plant in IPNI* and The Plant List* anymore. He described Ophrys oestrifera (very long horns, around along the whole Turkish coast), O. bremifera (small side horns, in Turkey from the Aegean region (Çesme) down to the Western Mediterranean region) and O. minutula, (short to middle long horns, only on the peninsula Çesme across from Chios). Well, maybe a trip along the coast to Assos (Behram) or Babakale above Lesvos should probably help to find more Ophrys minutula in Turkey. 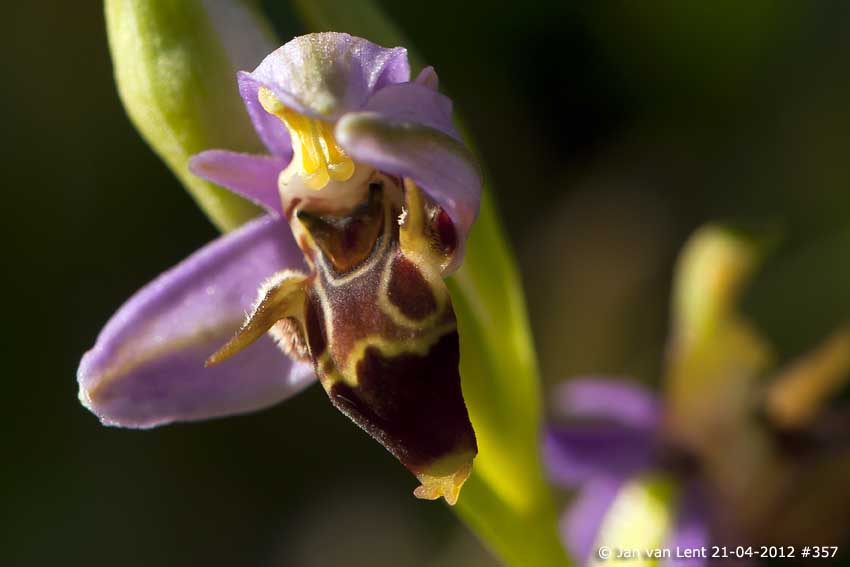 BOTTOM-LINE: Today on the 16th of May, after 3 weeks of staring and comparing, reading and rewriting I still can’t say for sure that those two ‘new’ members of the oestrifera group, here up from Liota, are definitively Ophrys orphanidea and masticorum. But on Ophrys minutula I am pretty sure, because I have this species already for years in my archive, and also from a lot of different habitats. And the ‘long horned’ members from this habitat above Liota, Ophrys cornutula and oestrifera, have to wait a year or so for my new attempt to re-photograph the Lesvian horsefly history…

*IPNI - The International Plant Names Index (www.ipni.org) is a database of the names and associated basic bibliographical details of seed plants, ferns and lycophytes. Its goal is to eliminate the need for repeated reference to primary sources for basic bibliographic information about plant names.

*The Plant List (www.theplantlist.org) provides the Accepted Latin name for most species, with links to all Synonyms by which that species has been known. It also includes Unresolved names for which the contributing data sources did not contain sufficient evidence to decide (by the Board of Trustees of the Royal Botanic Gardens, Kew. JvL) whether they were Accepted or Synonyms. On the Board of the Trustees are for instance H.A.Pedersen & N.Faurholdt, maybe the most ‘conservative’ orchidologists at the moment…

So no ‘official’: Ophrys orphanidea Saliaris & P.Delforge 2007, because that is an unresolved name according to ‘The Plant List’, it is a synonym for the IPNI Accepted name: Ophrys scolopax subsp. scolopax.

And no ‘official’: Ophrys masticorum P.Delforge & Saliaris 2007, because that is also an unresolved name, it is a synonym for the IPNI Accepted name: Ophrys scolopax subsp. cornuta (Steven) E. G. Camus 1908.