HABITAT: Anemomilos – on the Gulf of Gera, up from Koudouroudia, between Loutra and Skala Loutron – is every year one of the first habitats where orchids start to flower, and today it is the first! After thoroughly searching 3 other habitats for hours today – in vain – I arrived in the afternoon here on the coast of the Gera gulf. Hundreds of rosettes, some around 20 cm big, were yelling for attention but it was not one of the big ones (probably Ophrys mammosa or iricolor) and not one of those speckled rosettes (probably Orchis italica or maybe Orchis quadripunctata or Orchis anatolica), but a very small one hidden between the thyme bushes which had the first flower of the year; an Ophrys sancti-isidorii! Until a few years ago I never could identify this very early flowering Ophrys on Anemomilos (I’m ‘doing’ this habitat for 4 years now, three times in spring, March, April and May, and since last year also in January & February) but since the description of Ophrys (fusca subsp.) sancti-isidorii from Chios by A&P. Saliaris & Alibertis I could put a name on this Ophrys, and for me that is what it as all about: to give a flowering orchid a name! This Saint Isidore Ophrys flowers until the middle of March and around that time it will be surrounded and ‘swallowed’ by tens of other Ophrys species, and accompanied by the first flowering Orchis italica and Orchis morio ssp. caucasica. Or is it already Anacamptis morio ssp. caucasica today? Or  maybe even Herorchis caucasica? 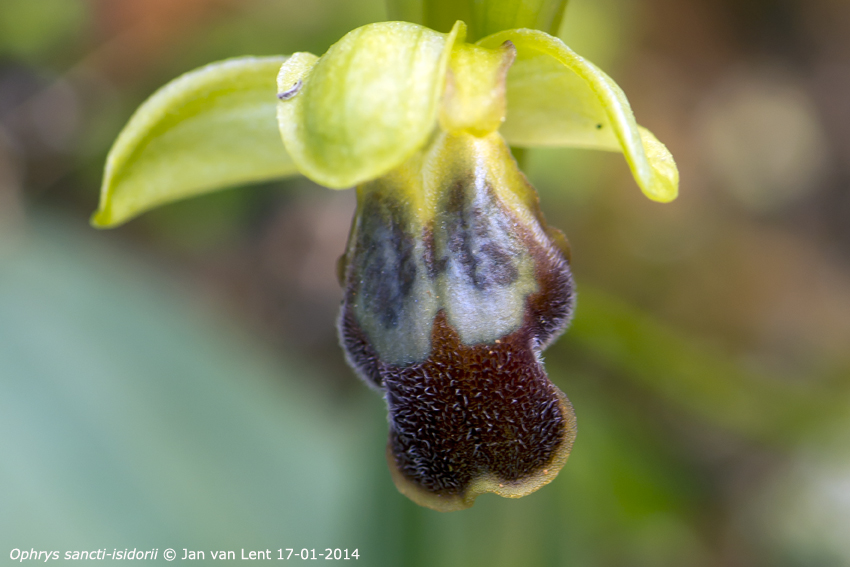 NAMES, DNA & ‘THE GOLDEN ORCHID’ AWARDS: This year I will extensively check out the old & the ‘new’ orchid NAMES & DNA related ‘swapped’ genera, so if there are more orchid researchers, scientists, grass-roots taxonomists, systematics, analysts, chemists, orchidologist and biologists in Europe who want to change the names of European Orchids? Please come forward and do your ‘thing’ now! So we can vote for the ‘Golden Orchid’, in three categories: ‘Best Original Orchid Name’ (BOON), ‘Best Longest Author name Behind orchids’ (BLAB) and ‘Best Arrogance & Ignorance’ (A&I). For every category maybe even two awards – a golden and a silver tiepin, sculptured in the form Orchis italica (the only Orchis on the island which perhaps will maintain its original name) – one with a long male sexual organ for the Gold and a shorter male organ for the Silver Orchid and maybe a brooch for the ladies? Ladies? Are there any ladies in OrchidLand (except for Ms Hirth & Maria Petrou)? Isn’t it like collecting stamps, or playing with your electric train: only for men? Questions, questions, questions…

So let’s see what is already wrong with the name of this first Ophrys from 2014. Until today nobody ‘did’ DNA or nuclear ITS on Ophrys (I’m afraid that before this year is over, maybe also the genus Ophrys will be revisited), so no family swaps, renaming (well…) and new Systematics momentarily on this genus.
Ophrys sancti-isidorii is a ‘new’ species, named after Saint Isidore, recently (four years ago) described as a very early subspecies of the Big Brown fusca family from Chios.
I wrote a blog about Ophrys sancti-isidorii already in February 2013: 17 ‘Ophrys fusca: That Was Only Yesterday’. (http://www.janvanlent.com/blog/?p=1514)

In other words: okay orchidologists, go home, it’s easy, they are brown …
Ophrys fusca (Dark Brown Bee Ophrys) was described by Johann Heinrich Friedrich Link (1767-1851) near Lisbon in 1800 and I think that the only ones who are still ‘going’ for the name Ophrys fusca subsp. fusca are Pedersen & Faurholdt in their ‘Ophrys, the bee orchids of Europe’ (2007).

And – looking at all the synonyms of Ophrys fusca subsp. fusca – I came across Ophrys laureotica, also a very early flowering subspecies of Oph. fusca (from Attica) and (to me) looking very much the same as Oph. sancti-isidorii. I remembered seeing photographs of this Ophrys from ANTONOPOULOS and TAGLIDES on the internet and that I was wondering if this was not the same species as Oph. sancti-isidorii, but on the other hand, ALIBERTIS is co-author of BOTH Oph. sancti-isidorii AND Oph. laureotica, so he should know the differences.

KALOGEROPOULOS, DELIPETROU and ALIBERTIS (2011): ‘A new uncommonly early flowering variant of Ophrys fusca from Attiki is described and compared to O. fusca subsp. leucadica and other flowering representatives of the section Pseudophrys. Ophrys fusca subsp. laureotica is characterized by a medium sized, saddle shaped, sub horizontal labellum with almost flat upper part, by flowering from December to February, and also by a specialized habitat (pine forest understory on metalliferous deposits)’. But this pine forest understory is of course a decisive difference from the understory of olive groves and thyme bushes… 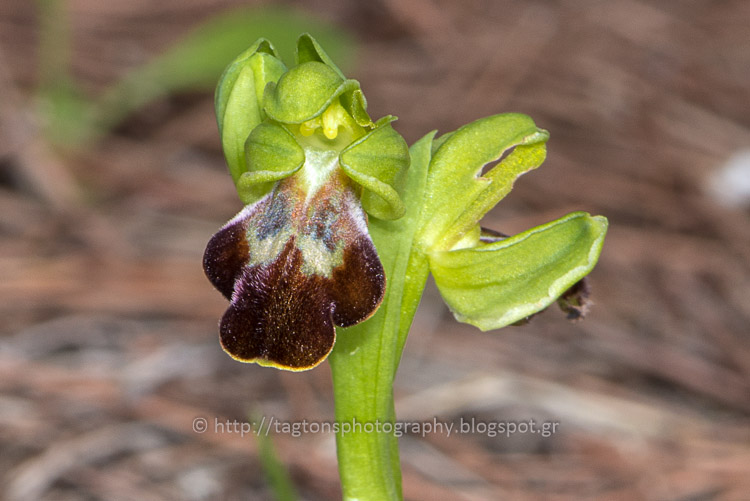 DNA research and (consequently?) the changes of the family names of the genera Orchis, Neotinea, Anacamptis, Aceras, Dactylorhiza and Gymnadenia are currently being proposed by different groups of Orchid researchers and scientists*. I’m afraid that they will soon continue with the remaining Genera on Lesvos: Ophrys, Himantoglossum, Cephalanthera, Epipactis, Platanthera, Serapias and Limodorum.

For three months now, instead of writing new blogs, I have been reading the books and articles from those scientists and I’m trying to understand why all those Genera names had to be changed. But I’m not a scientist; I’m a photographer who just wants to know which plant he is photographing! If there have to be changes to the genera then why can’t we use the good old Christian solution to insert baptismal ancestor names in Christian name? Instead of Anacamptis morio, Orchis Anacamptis Herorchis morio, alias (anthroponym) Orchis A.H. morio, in order to see immediately who were the ancestors, relatives or relations of this species? So then we don’t have to change all those Genera names immediately and we can wait until the ‘war on Systematics’ is over… 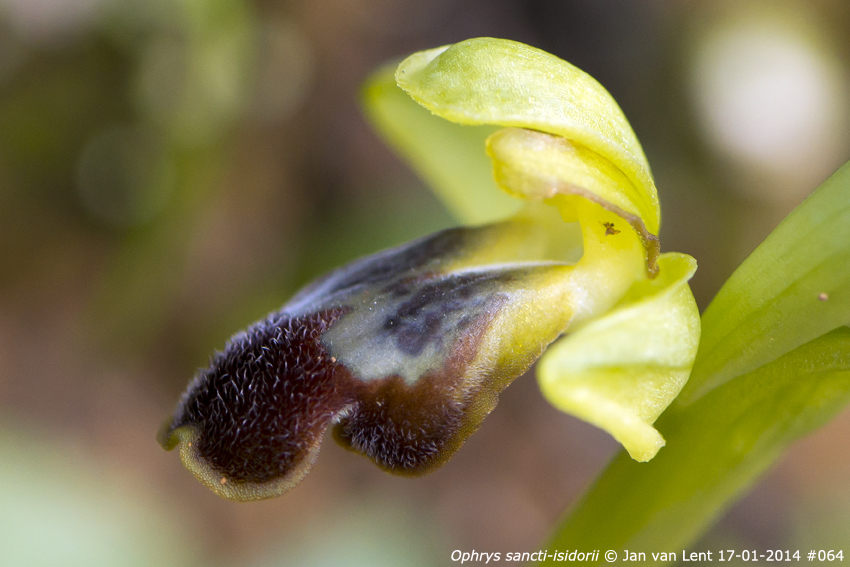 BOTTOM-LINE: Or are those ‘GOLDEN ORCHID‘ awards maybe too dangerous for the general (orchid) safety in Europe? Because a war between orchidologists from England*, Sweden*, Germany*, Belgium*, Austria* and Holland* – if it gets out of proportions – can lead to a systematic (!) extermination of all orchids in Europe. O yes, I can write such a scenario with ease (that was my former profession). And I saw already last year that ‘someone’ extracted some Himantoglossum from their habitat above Megalochori.

And after the presentation of the ‘GOLDEN ORCHIDS 2014’, can we in 2015 please go back to look at the European orchids ‘in the wild’? Or shall we skip that completely? Mwa, looking at orchids in nature, too boring…