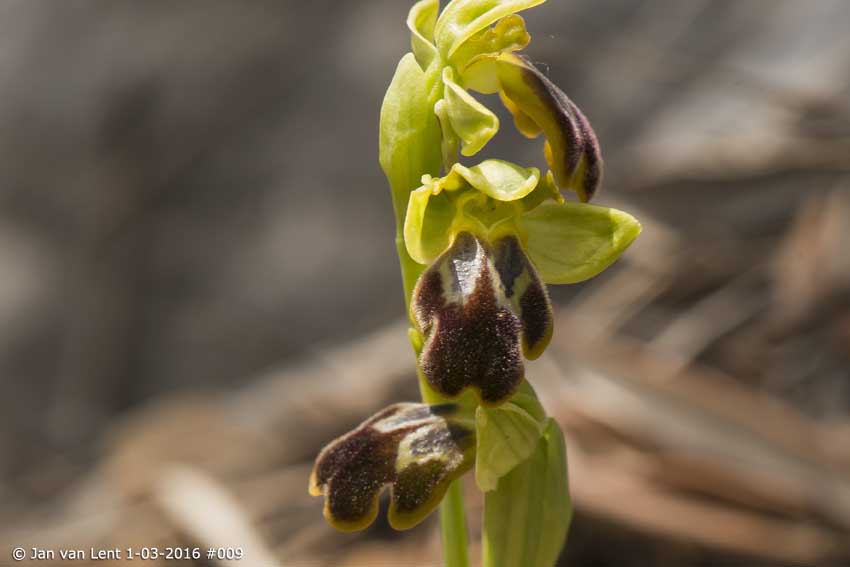 REMARKS: BURKHARD BIEL, a German biologist and orchidologist who researched Lesvos for almost ten years and who wrote several articles about the orchids (and other plants) here, made a list of all known orchid habitats dating back some 30 years from today (1984). In his most impressive work, which I call ‘The Big Biel’ (1998), he wrote about his earliest observations on Lesvos during an orchid season (March-June) on 1-03-1997: ‘1.6km SW of Loutropoli-Thermis, olive grove, Cistus phrygana, 130m height; Oph. fla-fus, iri, sit, Or.pap. B.rob.’ Translated to the present ‘official’ orchid nomenclature this means: Ophrys fusca subsp. flavipes, Ophrys iricolor, Ophrys omegaifera subsp. sitiaca, Orchis papilionacea and Barlia robertiana, nowadays Himantoglossum robertia-num. Except for Ophrys fusca ssp. flavipes which is now divided into many more taxa, the other ones are still known under those names but maybe very young orchidologist don’t recognize Orchis papilionacea because you have to call them Anacamptis papilionacea these days and for Lesvos: Anacamptis papilionacea ssp. messenica. Apparently the heroic version of the Butterfly orchid (Orchis papilionacea subsp. heroica) was not so heroic after all… it died in the latest ‘official’ literature (o.a. KRETZSCHMAR ET AL 2007). 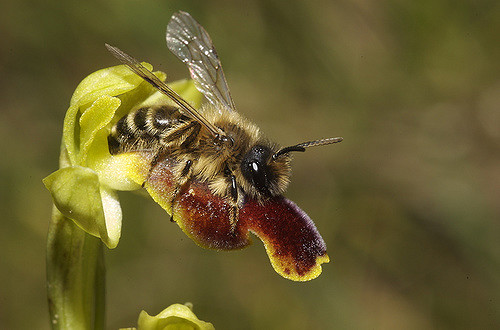 So let’s talk about the only species (Ophrys fusca subsp. flavipes) from the BIEL list which is not around us anymore – not because it vanished but because it was renamed as Ophrys bilunulata Risso by DELFORGE (2005). The name flavipes, which you find back in a lot of the older European orchid literature as an early flowering Ophrys fusca family member pollinated by the male bee Andrena flavipes, the Yellow-legged Mining Bee, was now definitively vanished*.
Is it because of those yellow legs of this bee that it prefers yellow-edged fusca-members to ‘mate’ with? And why do bees copulate and pseudocopulate  with Ophrys? BATEMAN (2012) wrote that they don’t gain anything from it; they just practice in case they meet a female bee so they know how to ‘behave’. And there are a lot of early fusca-members with brown lips and yellow edges…

HUNTING: On my annual February/March orchid hunts to the supposed BIEL habitat ‘1.6km SW of Loutropoli-Thermis, olive grove, Cistus phrygana, 130m height’ I never found Himantoglossum robertianum – but tens of Ophrys fusca subspecies with a yellow lip edge. It was finally in 2014 that I realised that I was probably looking at Ophrys cesmeensis when I found a sturdy Ophrys fusca with a yellow edged, very big lip (16-17mm) in the most upper olive grove on this habitat. But it was the 21st of February and the researchers were dating the flowering time of this Ophrys from the end of March until the end of April. But those sturdy Ophrys fusca couldn’t be Ophrys calocaerina, the only Ophrys I know with such a big lip, because February is not Kalokairi – Greek for summer – but Ximónas, winter. And to name it Ophrys xiemaerina is for me just one step to far… I leave that for some other orchid researchers. So I went back the last two years in February/March to see if Ophrys cesmeensis were still there and that I hadn’t made it all up behind my computer.

In early March this year Ophrys cesmeensis was not as big as the last years, the lip was ‘only’ 12,5mm in length, but if you press it down it grows already to 14,5mm. Full-grown, like it was last week (the 23rd of March) – the lip was almost 17mm. It was surrounded by other, but much smaller fusca family members; Ophrys sitiaca and Ophrys sancti-isidorii.

RESEARCH: Ophrys cesmeensis was and is – for Greece – a controversial orchid; until last year it was only described as endemic – here we go again –  to the Çeşme peninsula, near Smyrna/Izmir by KREUTZ in his ‘field guide to the Orchids of Turkey’ from 2003 and by DELFORGE in 2005. But did both gentlemen check for instance Chios, Lesvos or Samos – all three a few kilometres down the coast from Turkey (known worldwide these days, but for other reasons) for this Ophrys? Well yes, they did – two years later DELFORGE & SALIARIS (CHIOS 2007) stated that on Chios the Ophrys attaviria group was represented – among others (JvL) – by O. attaviria (var. attaviria and var. cesmeensis). And apparently also KREUTZ did, because TAYLOR (2015) – who found a more or less similar Oph. attaviria ssp. cesmeensis on the 26th of March 2008 on Chios – wrote: ‘Three English visitors, Franklin, Giles and Lewis, discovered a strong colony of this taxon at Emporios on 3 April 2006. Karel Kreutz, author of the taxon, confirmed the identification from submitted photographs and later during a visit to Chios in 2008 when he examined the plants.’
My last two books on Greek orchids – ANTONOPOULOS (2009) and also PETROU (2011) – didn’t mention Ophrys cesmeensis because the only official reference at that time was from this region of Çeşme in Turkey and both books covered ‘only’ Greece. 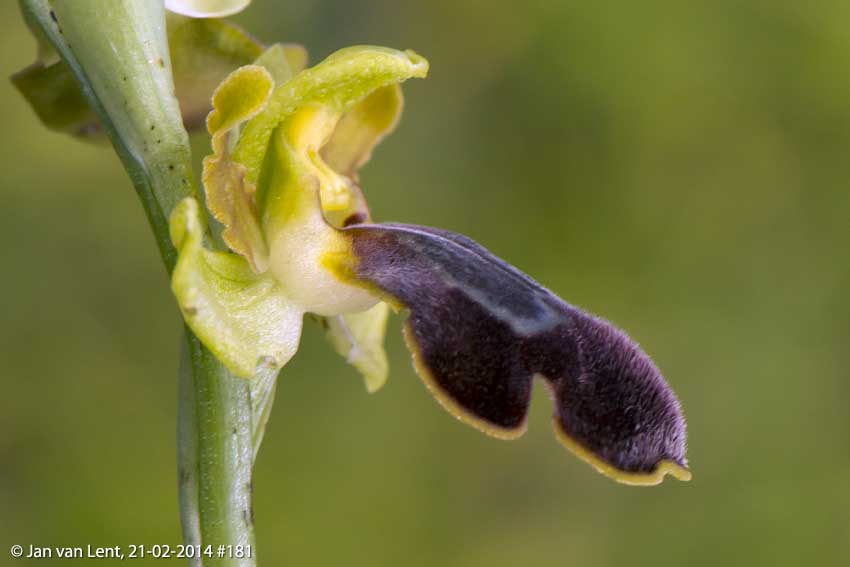 But now we have ‘The Self-Sown orchids of Greece’ by ANTONIS ALIBERTIS (2015). His description of Ophrys cesmeensis: ‘Certain characteristics make it differ from O. fusca ssp. attaviria. It is a sturdy plant, up to 20 cm in height, with up to 6 flowers. Sepals & petals almost of the same colour and a medium-sized to big lip at times almost flat and at times totally curved longitudinally and across, in fact at times with a slight basal bent. (It has) a whitish, yellowish or ochre base of lip, and mid-point with significant protuberances (swellings). Speculum (is) almost smooth, blue to blue-blackish, shiny, with two discernible crescents at its edge, divided by a swallow channel. (It has a) brown-violet pilosity of lip, at times framed by a discernible concentric zone around the speculum. Noticeable edges of lip, wide, yellow or yellowish.’

ALIBERTIS described Ophrys fusca ssp. cesmeensis from Chios and ‘probably’ Lesvos and that accounts to his credit, (now) I really like the book. Also his NOTES to almost every species are nicely de-mystifying: ‘As P. SALIARIS claims – in Chios, there are two forms of Ophrys fusca ssp. cesmeensis – K. Kreutz has indicated them to him – the one with dark flowers and the other definitely with paler.’ Ah! O! That explains my difficulties of getting to know her. 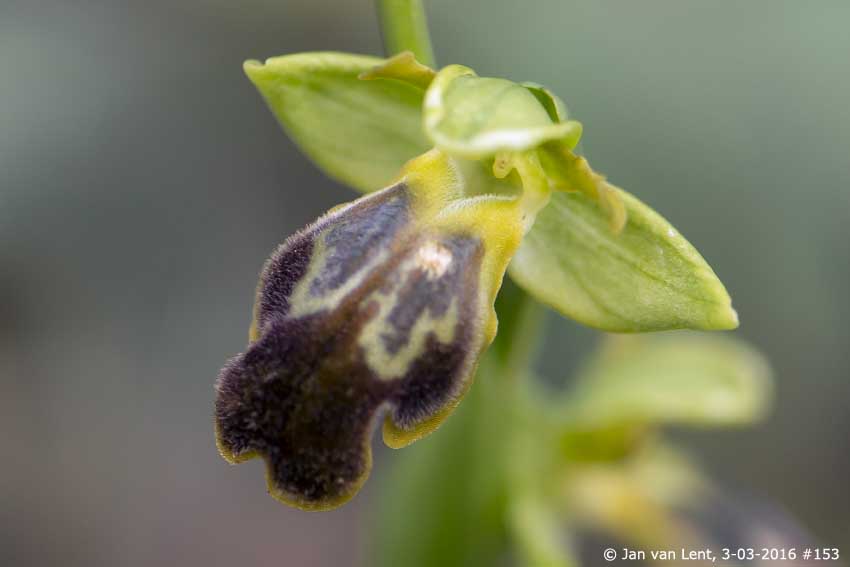 BOTTOM-LINE: Alibertis is known, famous or notorious (choose yourself) for many new described orchids in Greece, and also this book doesn’t let you down on that subject: already in his Ophrys fusca group there are 6 new named Ophrys I had never heard of… (See blog 46 ‘Such a Shame’: www.janvanlent.com/blog/?p=3978). In his book I found twenty-one fusca’s with a yellow edged lip, only Ophrys attaviria, eptapigiensis, pelinaea & theophrasti (thus the later flowering fusca-membera) are not blessed – on Lesvos – with a yellow edge but with an orange/red/ brown edge.

But there are still a lot of other Ophrys fusca s.l. with brown lips and yellow lip borders flowering during this early March. Descriptions don’t help out much here because they are for most fusca-members almost the same. But good photographs really do help so finally I could compare ALIBERTIS cesmeensis photographs with the ones I took in the last years from this big Ophrys and yes, they are alike. And yes, it took me quite a lot of time to know this big and early flowering Ophrys!

*In 2014 PAULUS & HIRTH (Ophrys Kefalonia, 2014) renamed all Ophrys pollinated by Andrena flavipes  into a new Ophrys bilunulata group. For instance: Ophrys fusca subp. sancti-isidorii KREUTZ 2003 was renamed Ophrys bilunulata subsp. sancti-isidorii PAULUS & HIRTH 2014. Therefore I presume that I should call Ophrys cesmeensis these days Ophrys bilunulata subsp. cesmeensis PAULUS & HIRTH 2014. So now we have, in the Pseudophrys section, next to the iricolor, fusca,attaviria, blitopertha,omegaifera and lutea group; the bilunulata groups. Well, that’s maybe a better solution than renaming all fusca taxa with a yellow lip border – pollinated by Andrena flavipes - as Ophrys subfusca (Rchb. f.) HAUSSKNECHT 1899… 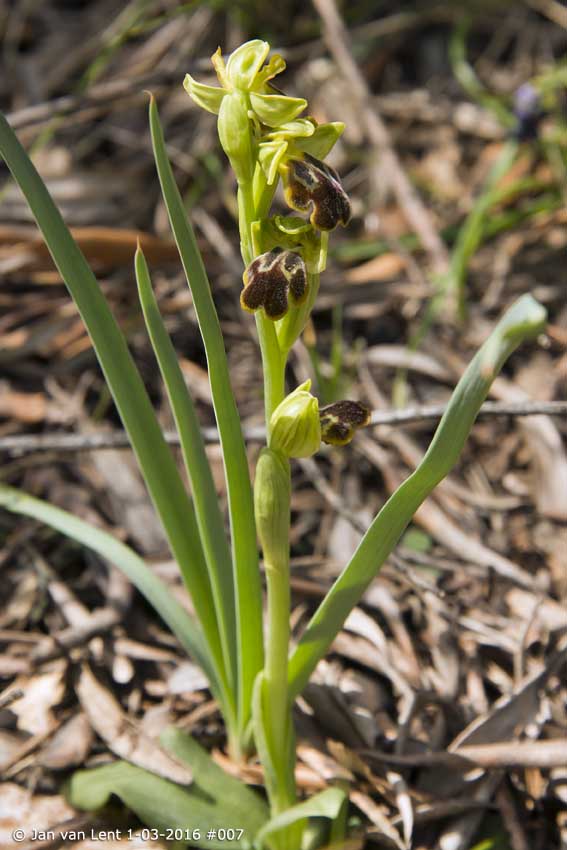 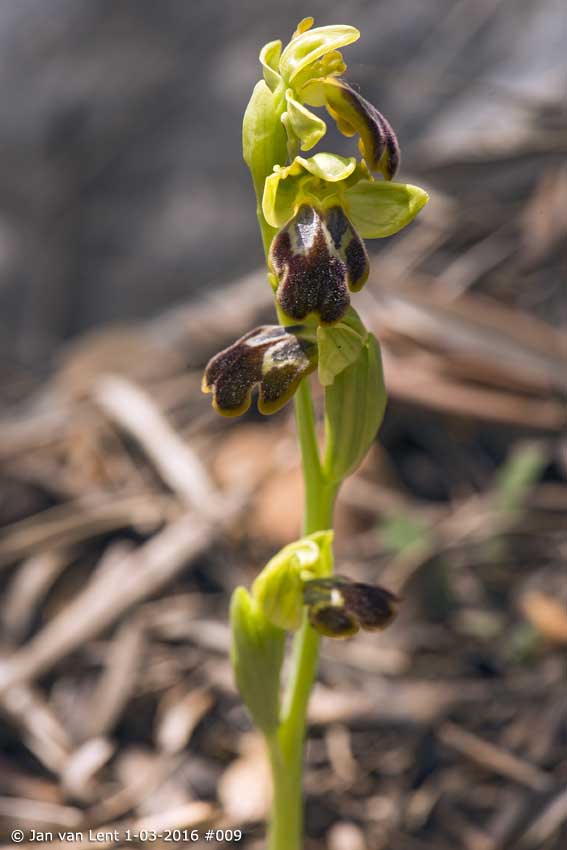 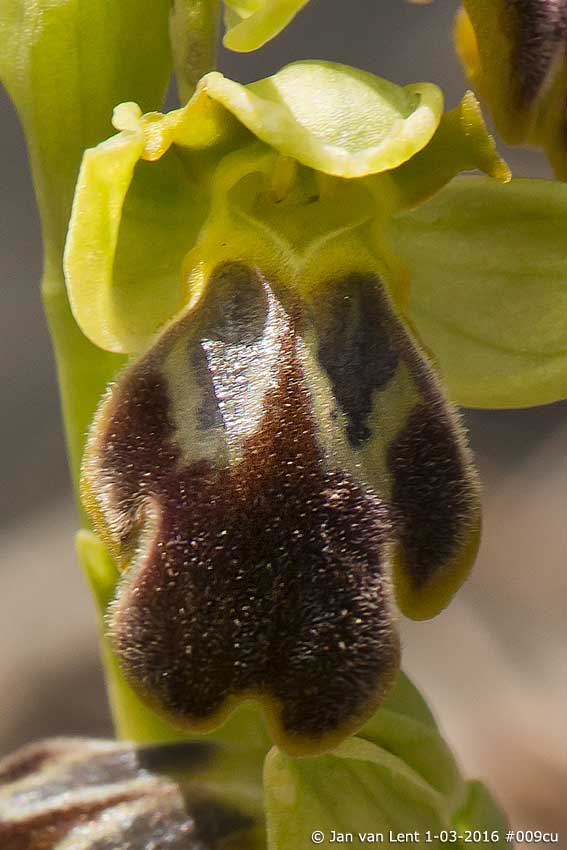 ETYMOLOGY: Cesmeensis: Çesme = area in Turkey near Smyrna/Izmir, opposite Chios. 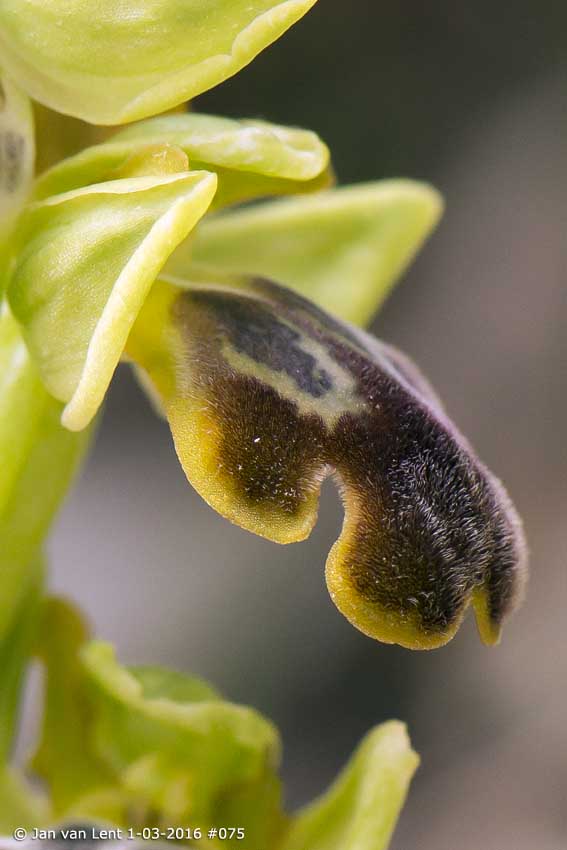 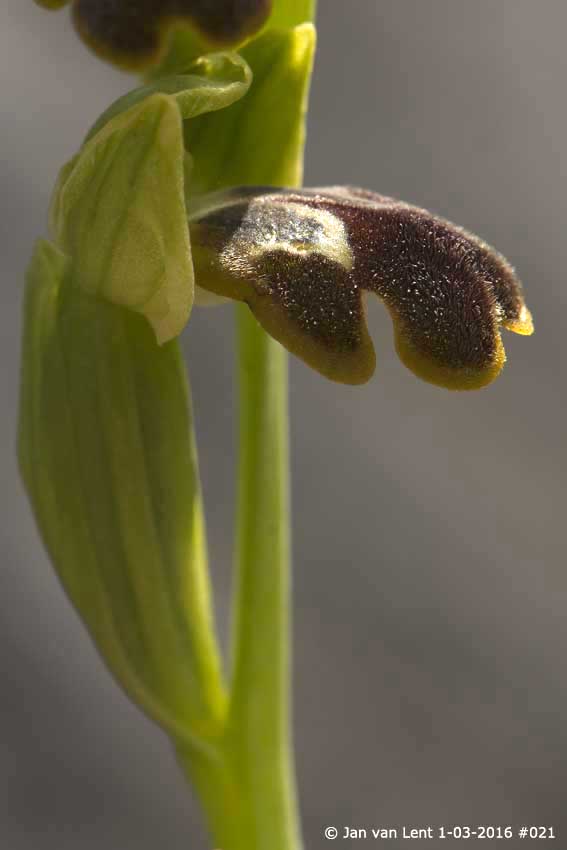 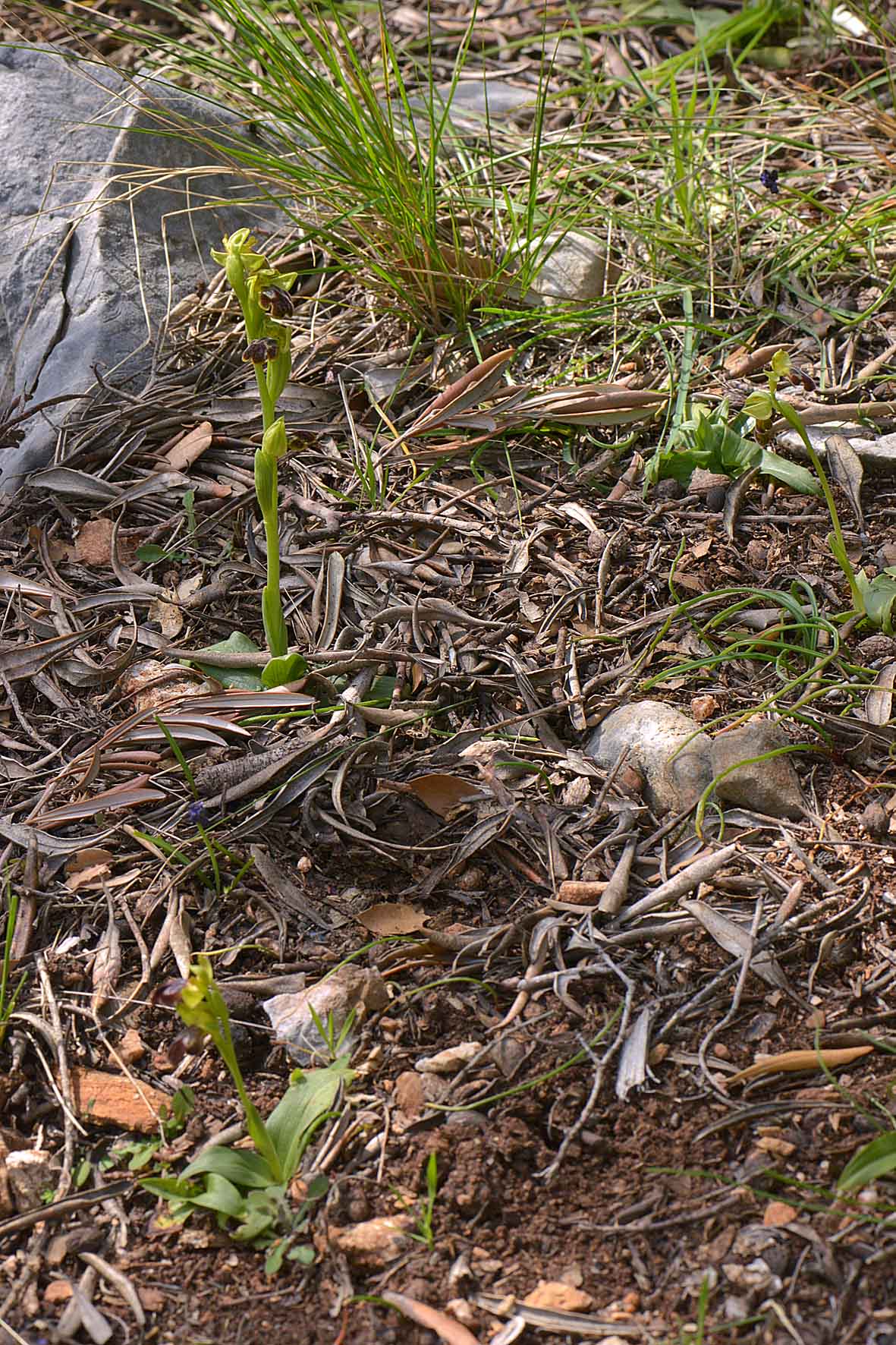 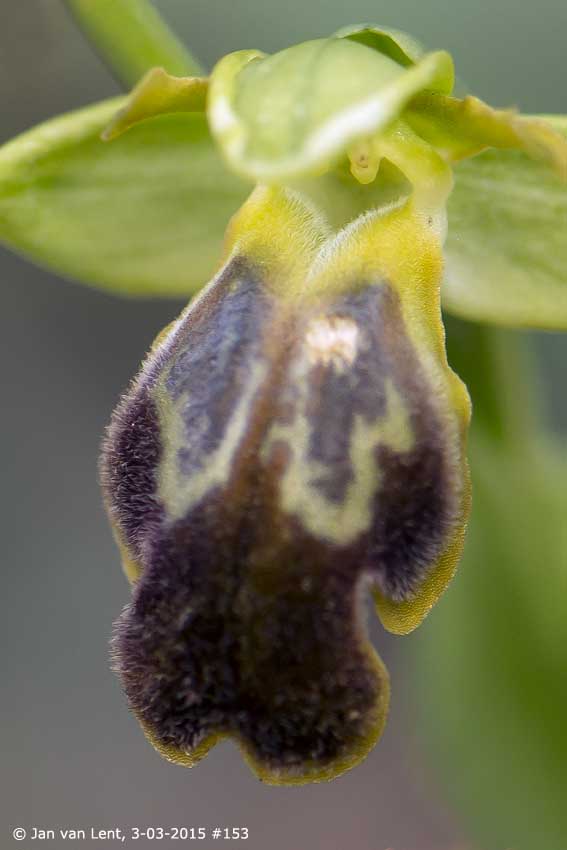 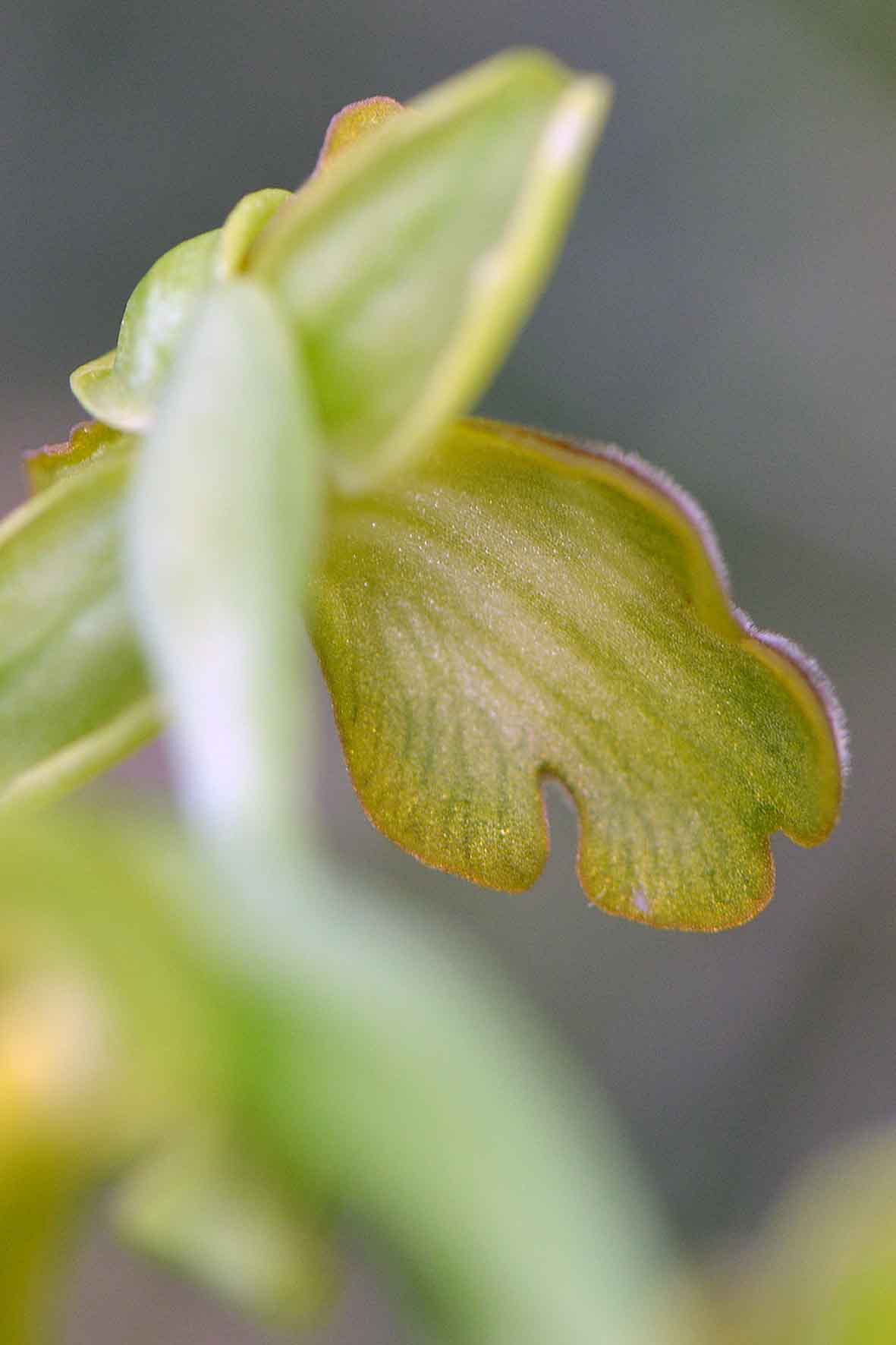 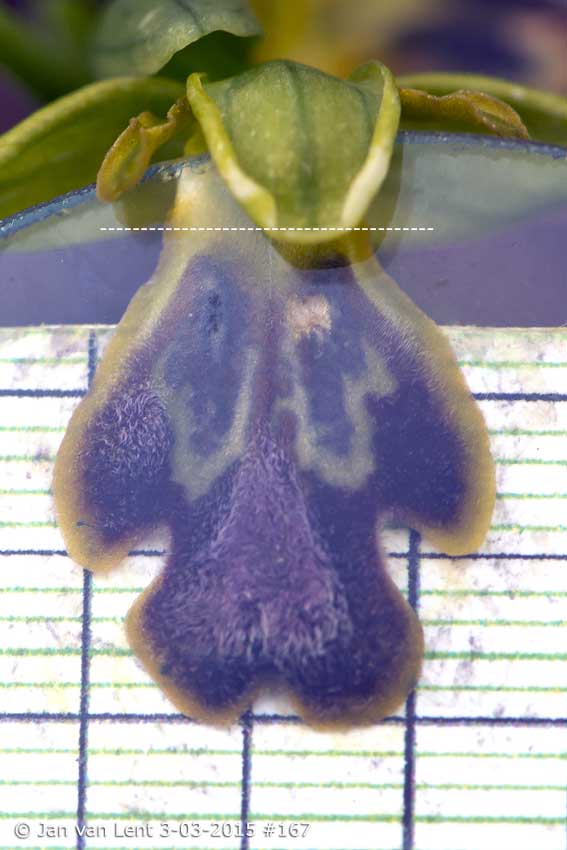 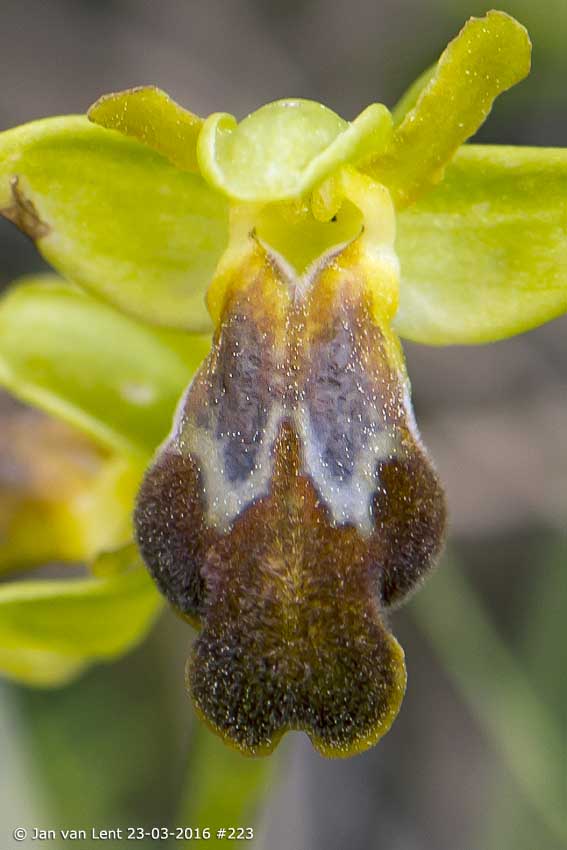 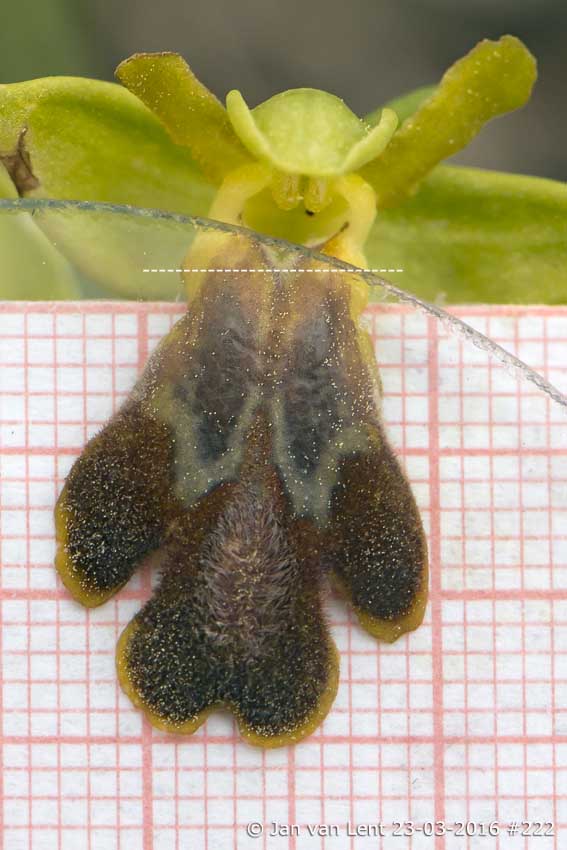