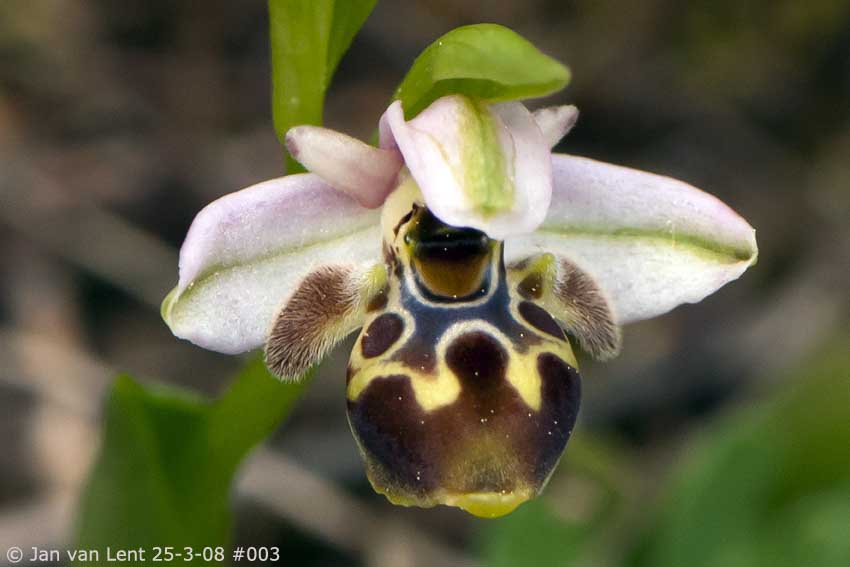 HABITAT: In 2010 I took the last pictures of Ophrys umbilicata in the phrygana in Eftalou, so this will also be an ‘in memoriam’.  The first time I discovered this tiny and solitary specimen was on 25-3-2008, it appeared again in 2009 and danced its last ‘waltz ‘ on 24-3-2010 after a very wet winter. For four seasons now I have been looking to see if it will appear again, on the same spot or somewhere else in Eftalou. ‘Típota’ we say in Greek: nothing. Why they perished I really don’t know but a herd of horses was running and eating along this path in the winter of 2010 – 2011. And the next winter (2011) was one of the driest winters we had in years so maybe they just gave up…

Eftalou is also not the ‘normal’ habitat of Ophrys umbilicata or its family members according to ‘the books’ or even to all orchidologists who visited the island on their orchid hunt. That all those orchid researchers didn’t find Ophrys umbilicata in Eftalou is not so surprising: it’s too early for charters to the island and the north of Lesbos doesn’t have a reputation of being ‘THE’ habitat for Orchids. Even serious orchid researchers such as BIEL (1998-1999) or GÖLZ & REINHARD (1989)  who visited the island also in March never came to the north of Lesvos before the holiday season started at the end of April. And that is a pity because they missed not only Ophrys umbilicata but also Himantoglossum robertianum; Ophrys sicula; Ophrys speculum; Ophrys mammosa; Ophrys phrygia; Ophrys iricolor; Ophrys (iricolor subsp.) mesaritica; Anacamptis pyramidalis; Anacamptis (Orchis) sancta; Anacamptis (Orchis) fragrans; Anacamptis (Orchis) collina. See Blog 37: 10 years of orchid hunting in Eftalou: ‘Lay down lay down’… http://www.janvanlent.com/blog/?p=2734).

But back to Ophrys umbilicata. The BIEL & GÖLZ & REINHARD finding lists of the Navel or Carmel Ophrys contain almost solely habitats in the south of the island, around Plomari between the 3rd of March and the first of May. The most Northern habitat where they and other orchidologists actually saw umbilicata was in the North-west; around Eressos and around Andissa. So it was at least ‘strange’ that umbilicata was flowering in Eftalou and therefore I was never sure about my identification, also because ‘my’ umbilicata had green pseudo-eyes and this was said to be a unique characteristic of Ophrys bucephala, the nearest and almost endemic family member of Ophrys umbilicata described by GÖLZ & REINHARD from Lesvos in 1990. It is not certain if Ophrys attica still exists on Lesvos, if it ever did in the first place.

HUNTING: So I went again to all the habitats where I have found members of the Umbilicata-group (Alifantá, Lambou Mili, Avlona & Andissa). Let’s begin with my favourite habitat: Alifantá. Here I found all kinds of varieties of the ‘umbilicata’ family: pink, white, green-pink, green and dark olive green perianths (sepals & petals); round, square and oval middle lobes; light brown, dark brown and red-brown coloured lips. So maybe all Ophrys had a special dancing party here? And were there maybe also hybryds or transitional forms in between?

Let’s first look at the described differences between the three species: Ophrys umbilicata: white or pink perianth, a short stem, thinner and shorter inflorescence than O. bucephala. A reddish-brown base. Often a yellow edge on the more globular lip as O. bucephala; the sepals are more horizontal positioned and don’t hang down as on O. attica and O. bucephala; black pseudo-eyes.
Ophrys attica:  an olive-green perianth. Bigger and hanging wings, square lip, the dorsal sepal is longer and hangs deeper over the gynostegium than on O. umbilicata. Reddish-brown base, black pseudo-eyes.
Ophrys bucephala: has a bigger flower, narrower and also more narrow pointed lip, a relative small, not deep stigmatic cavity, a whitish-green perianth, more flowers, the medium-sized centre lobe is almost globular, red base, green eyes with black centre.

On the track to the aqueduct before Lambou Mili I found only light pink and almost white perianths: Ophrys umbilicata, no green petals & sepals in sight!

On the Avlona habitat on the other hand, there was another party: a whole bush of O. umbilicata. But when I stepped back I almost stood on a solitary green umbilicata! Green umbilicata? ‘Zing’ I thought optimistically, Ophrys attica! And they are really flowering next to another 40cm apart? At the same time on the same habitat? That is against all biological rules isn’t it HENNECKE & MUNZINGER (2014)?*

RESEARCH:  DELFORGE (2005): ‘Although no clear-cut morphological character seems to distinguish O. attica from O. umbilicata, which has led to the frequent refusal to separate the 2 taxa, it seems that they are isolated due to their different pollinators. (Eucera spatulate for O. umbilicata & Eucera seminuda for O. attica) Nevertheless, the situation within the (vast?) contact zone needs to be investigated further.’

Different pollinators? So if I interpret the above photographs right I have to imagine two different bee species cozily buzzing together in the direction of the above plants: Spatulata: ‘Sorry mate, out of the way now, our flight destinations are different from here, you have to go to the green fatty one, I go to ‘my’ subtle pink lady and I warn you: don’t dare to come near my girl Semi! Seminuda: ‘Come on Spatu, don’t be such a Casanova, I don’t want to see you ‘doing it’ with your pink girls, and by the way, I like only the bigger green girls from Attica, I will never touch your coloured ladies, I don’t like their perfume!’  Like this Gents?

Interesting are also the remarks of KREUTZ (Cyprus 2005) on the occurrence of Ophrys attica on Cyprus: ‘The occurrence of Ophrys attica had been disputed for a long time, until the author and other orchid researchers, were able to identify the species at several places. Just as in Turkey, they usually occur as solitary plants. Ophrys attica does however undoubtedly occur on Cyprus. But hybrids with the species mentioned above (O.flavomarginata, lapethica, rhodia & umbilicata) were not yet found.’

So is the green Ophrys attica maybe always a solitary plant? KREUTZ (Rhodes & Karpathos 2002): ‘The species (Ophrys umbilicata) is very rare on Rhodes. With the exception of one location on the Akramitis, over and over again Ophrys umbilicata has been found as a solitary species.’

In Turkey, where all three species occur, according to KREUTZ (1998): ‘Ophrys attica, a species which by many authors is placed in the vicinity of Ophrys umbilicata, is mainly distinguished by the always thickset growth, the wide cylindrical inflorescence, the somewhat bigger flowers and the always green perianth.’ Kreutz didn’t mention that ‘attica’ was also a solitary plant in Turkey but he did mention that almost all authors who researched orchids in Turkey had problems to separate both taxa from each other, except of course for the colour of the perianth.

Ophrys attica is in the opinion of PEDERSEN/FAURHOLDT (2007) a synonym for Ophrys umbilicata subsp. umbilicata: ‘This subspecies exhibits a typical example of clinal variation**. In the westernmost part of its range, almost all individuals have green sepals, but further east they are gradually replaced by individuals with rose-coloured to white sepals, and in the Levant (Israel, Lebanon) such plants are by the far most frequent.’

And it should be so simple: if the flowers have a pink perianth then it is Ophrys umbilicata and when they have a green perianth, a more thickset appearance and somewhat bigger flowers then they are Ophrys attica (or the bigger Ophrys bucephala). And now I have to ask myself also the question: Is Lesvos in the middle between the west and the east? Maybe it is, BUT (ANTONOPOULOS 2009): ‘in continental Greece, individuals of O.attica with pink perianth are observed’. PETROU (2011): ‘Recently, the researcher Elias Tselos found a population of about 200 individuals (of O.umbilicata subsp. umbilicata) in Aetoloakarnania (Etolia-Akarnania), growing alongside O.umbilicata subsp. attica. While it seems improbable, considering its distribution, the individuals were typical specimens.’ So actually O.umbilicata occurs next to O.attica?

And I am of course not the first one who is breaking bad over ‘umbilicata’ on Lesvos. 25 years ago, the authors of Ophrys bucephala, GÖLZ & REINHARD (1989), compared three species with each other: Oph. umbilicata, Oph. flavomarginata and Oph. bucephala. Why they used Oph. flavomarginata (= with yellow border- only on Cyprus and Israel) instead of Oph. attica for their comparison is a bit strange, but: ‘In our article from 1981 we still used the name Ophrys carmeli for this species. For that matter we often argued that O.attica and O.umbilatica are identical (The taxa difference between both is merely 5). The only one significant distinguishing mark is the colour of the perianth, which is for “attica” almost always green, for “umbilicata” in accordance with local populations – each to different percentages – mostly petal style – white to pink.’ (Translation German – English: JvL) 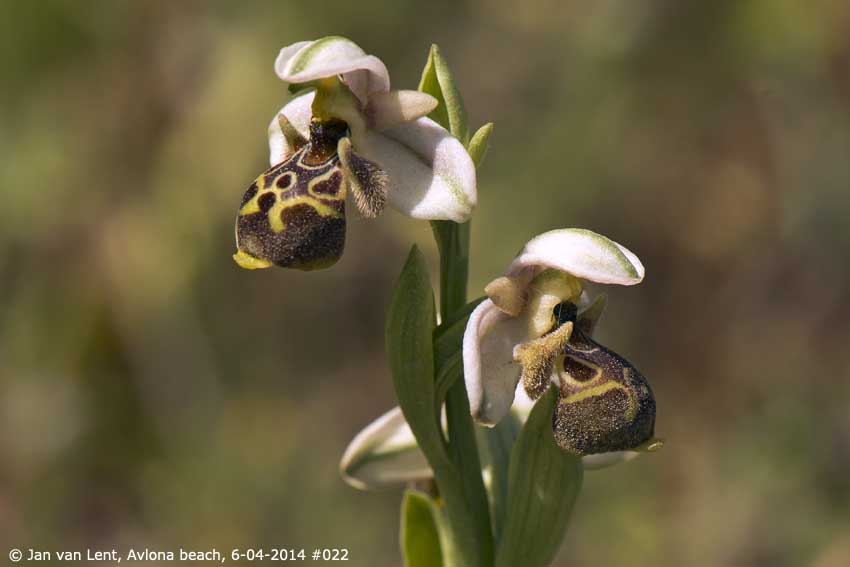 Also BIEL (1999a) wrote – 15 years ago – about ‘umbilicata’ and ‘bucephala’ on Lesvos: ‘Based upon investigations on the orchid flora of the island of Lesvos during several years, comparing works in various areas of the Aegean region and the evaluation of relevant literature, conclusions about the taxonomy of the Ophrys scolopax s.l. and the Ophrys umbilicata-complex are given – in context with critical annotations to the actual interpretations of the “species” term in the European orchid “scene”.’
But in this and his other in-depth research of the orchids of Lesvos he not even once mentioned Ophrys attica (or Ophrys umbilicata subsp. attica). Why not? Didn’t he find them? I doubt that. Did he think they were small O.bucephala or transitions between O.bucephala and O.umbilicata? I doubt that too.

ANTONOPOULOS (2009): ‘The perianth from O. attica is usually greenish in continental Greece but, going to the east, it changes gradually into pale rose or pink’ and: ‘Although the eastern limits of the latter are unclear, it seems to have been replaced completely on the islands of the eastern Aegean by O.umbilicata’. 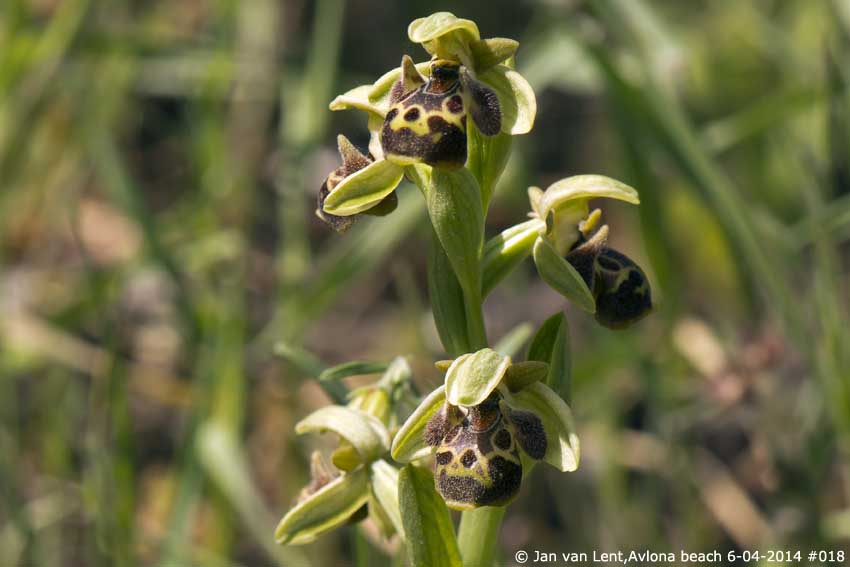 BOTTOM-LINE: But all the descriptions and all photographs of all Ophrys from all orchid researchers, orchidologists and orchid enthusiasts don’t matter anymore, we can throw them away. *HENNECKE & MUNZINGER (2014) published the REAL relevant determination data for Ophrys: 3.1) NEVER look at and photograph the first and last flower of a Ophrys, the first flower can still have frost damage, the last flower already dry-out damage; 3.2) speculum pattern should not be used in an Ophrys-determination; 3.3) the colour of the speculum and lip should not be used; 3.4) the distinguishing mark plant- and lip size should not be used; 3.5) pollinator-insects, mycorrhizal fungi, wind-drift etc. and also 3.6) Phenology and Ecology etc. can’t be used in the demarcation of their Biospecies-concept.
But there is some hope ‘What stays’: 3.7) 1. DNA-analyses, 2. Their biospecies-concept, 3. Two subspecies can’t flower on the same time on the same habitat (meadow). Then they are either two species or just varieties.
Well, I am quite silenced by their articles. So I better should be blind (never look at…) and use only my nose to distinguish the different Ophrys? Am I an insect? For what reason did ‘God’ give humans eyes? To use DNA-analyses and a biospecies-concept in the field?

Before HENNECKE & MUNZINGER published their biospecies-concept and their morphologic dendrogram the ‘challenge’ was not to separate O.umbilicata (small flowers, pink perianth) from O.bucephala (big flowers, green perianth), that should be easy enough, (well…) but to separate O.umbilicata from O.attica. But more and more I’m inclined to believe that O.umbilicata can also have a green perianth (and O.bucephala also a pink one, as I will show in PART 2 of this umbilicata story), but if this is only depending on different pollinators I don’t know. Maybe mycorrhizal fungi, wind-drift, Phenology and Ecology still have an influence on plants, orchids and also Ophrys.

So fortunately there are still ‘attica’s varieties on Lesvos, as you can see for yourself on the Alifantá and Avlona habitats. And I don’t think that Ophrys umbilicata var.attica has danced its ‘Last Waltz’, either on Lesvos or in the European orchid “scene”.

**clinal variation: a continuous variation in form between members of a species having a wide variable geographical or ecological range.