HUNTING: After 3 weeks looking at and rewriting my blog about the oestrifera group, I had enough of this group, so I went up here in Eftalou to do my final shooting on Anacamptis pyramidalis, which have been growing here in abundance since the beginning of April. An easy Orchid, no groups around, no complications about names whatsoever, just simply red, pink and white flowers. So I went around on the Eftalou fields making tens of photographs as I thought: ‘before the sun sets, have a quick look at the field where the Himantoglossum robertianum was flowering one month ago’. (Blog 6). I walked up to this huge plant, (still around but of course no flowers anymore) and stumbled over a high, slender Ophrys with 5 big flowers with very long horns. Again I was astonished: In the 9 years I have been crossing this field I never saw one Ophrys, let alone one Ophrys from the oestrifera group in this olive grove, or even an oestrifera member in the whole North of Lesvos! But the light was quickly fading away so only a few photographs were the catch, like the one above. I didn’t have my measuring device with me, but I could see that my catch was more than 50cm high and had very long horns. And it was not one plant but three close to each other! A very small plant with 2 flowers, a medium plant with 2 flowers and the big one with 4 flowers and one flower opening. 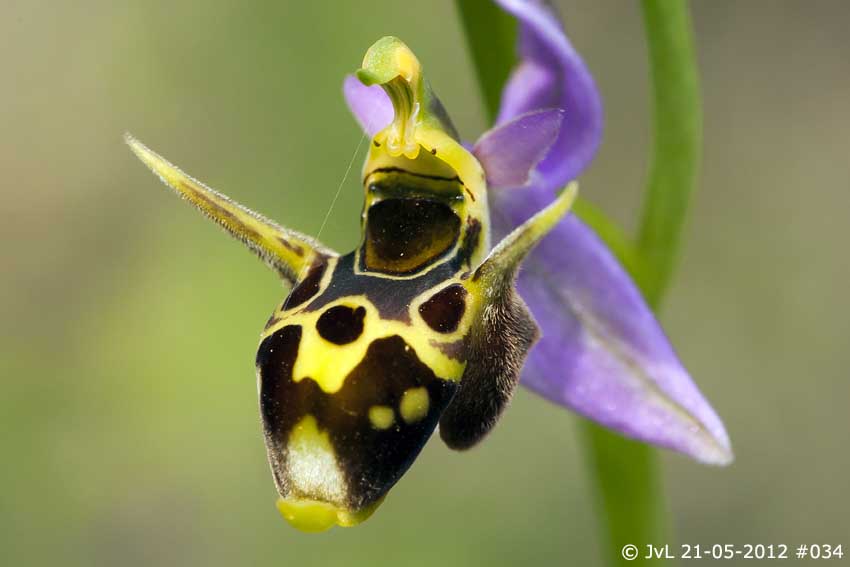 The next day I went straight back to this olive grove to make more photographs of this Ophrysand when I came into the field I almost stumbled over a few oestrifera group species, the same as the day before but smaller. While taking their pictures and measuring their sizes I saw that they were exactly similar to the ‘big’ one from yesterday, which was fortunately still standing there. Fortunately because there is group of horses who use this olive grove for drinking (there is a small stream on the side), grazing and galloping. I walked around in this olive grove but I didn’t have to go far: a few metres away I discovered 10 more plants, all the same species, some small, some medium, some very big. And now I had my measurement tool with me so here are the votes for the biggest Ophrys: 51 cm high; lip 13×8.5mm; horn inside 10mm, outside 16mm; petal 4.2mm long; sepal 14.9×6.6mm. And now for the main question: what is it? 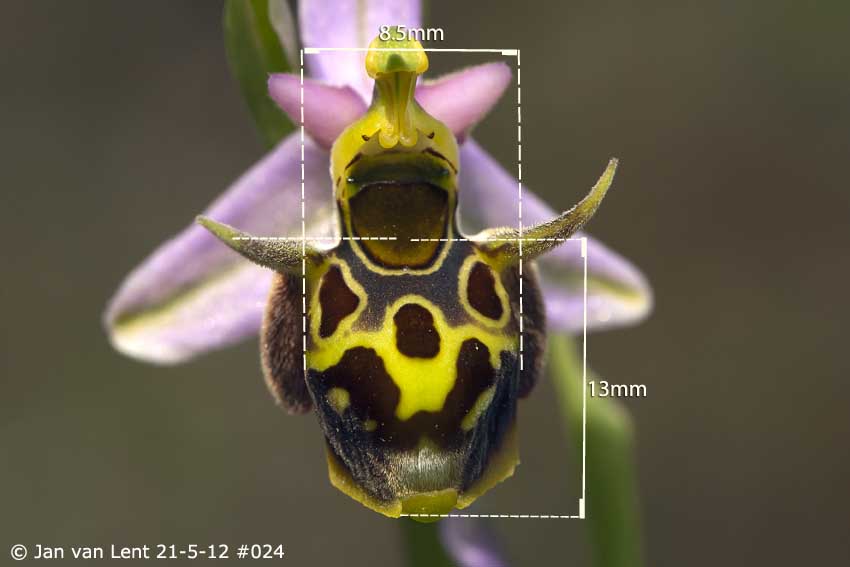 RESEARCH: Until now I thought there were 2, maybe 3 long horned oestrifera members on the island: O.cornutula (small 6-9mm lip and earlier flowering, mid March-mid April); O. oestrifera (medium lip of 10mm, very long horns, which are hairy outside and inside until the base, small petals, mid April-mid May) and perhaps O. phrygia (round, globular lip of 10-15mm, long horns, turned outside, flowering between the beginning of May until the middle of July). Quick conclusion: this has to be Ophrys phrygia.

ANTONOPOULOS (2008) about Ophrys phrygia: ‘Another Turkish species which has only recently been reported in Greece, more specifically on Chios (by Hirth & Spaeth, 1998). The main characteristics are its late flowering (it normally flowers on Chios at the beginning of May) and the very characteristic lip which is globular at the base and very wide in relation to the stigmatic cavity. The bracts are also long and the length of the lip ranges between 1 and 1.5cm. This is often a tall plant, its stem sometimes reaching a height of 60 (90) cm. To date, it has only been found in a few parts of Chios.’

A Turkish species? So let’s look to KREUTZ (1998) ‘Die Orchideen der Türkei’. His section of Ophrys phrygiagoes deeply into the ‘Problematik’ of this species: ‘After the description of Ophrys phrygia as a small growing plant with small, loosely arranged flowers (from the Turkish province Konya, in south-central Anatolia) by H.Fleischmann & Bornmüller in 1923, this Ophrys for a long time fell into oblivion, and only in 1982 did BAUMANN (1982b) again focus attention on this orchid. In 1982 this species was still treated by BAUMANN & KÜNKELE (1982a) as a synonym of Ophrys oestrifera subsp. bremifera (Ophrys bremifera). But in the same year BAUMANN & KÜNKELE (1982b) recognized and described Ophrys phrygia as an autonomous species and connected it to the Ophrys phrygia described by H.Fleischmann & Bornmüller. They then attached the name Ophrys phrygia to a very tall, loose- and large-flowering species widespread in South andEast Anatolia. Today BAUMANN’s interpretation of Ophrys phrygia is generally adopted.’
But why did the same BAUMANN (in BAUMANN/KÜNKELE/LORENZ, 2006) suddenly rename Ophrys phrygia 23 years later as Ophrys oestrifera subsp. phrygia (H.Fleischm. & Bornm.) H.Baumann & R.Lorenz 2005? But maybe he just wants his name behind every orchid in Europe.
But in short, yes, this is still ‘my’ Eftalou oestrifera member. 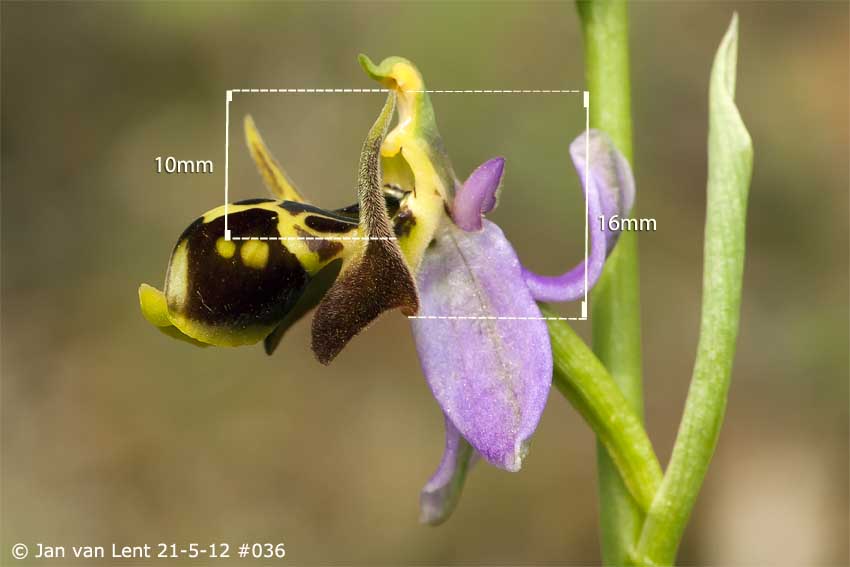 But to be really sure in claiming this Ophrys for Lesvos I read DELFORGE’s (2005) description of Ophrys phrygia carefully, but to quote his description completely I need a few pages more. Important: ‘speculum complex, extensive, sometimes very fragmented, bluish-grey to reddish, glossy, broadly edged yellowish, forming a bilobed shield surrounding the reddish-brown basal field, extended by an often incomplete central ocellus (eye, jvl), 2 parallel lines and/or 2 isolated spots above the appendage as well as 2-4 (-6) plus minus regular small lateral ocelli;’ And also all the rest of the description and dimensions are right. So this is Ophrys phrygia.

And Karatzá (2008), did he find Ophrys phrygia on Lesvos? Yes. On a few different habitats, all in the south of Lesvos: Thermí, Loutrá, Mória, Alifantá, Gkantanás and Mt. Koúrteri. But he did not mention a date and neither did he put a date on his photographs. When did you find them Karatzá, recently or long ago?

BOTTOM LINE: Until the discovery of Ophrys phrygia on Chios (Hirth & Spaeth, 1997) it was thought to be an endemic Turkish species, flowering on some habitats from around Izmir to East-Anatolia (KREUTZ 1998). DELFORGE in 2005: ‘Distribution: Rather poorly known due to confusion with related taxa. Southern Anatolia, principally the Antalya region, east to the Iraqi frontier. In the west, the rare reports from the Aegean islands are doubtful. Local and rather rare’. So until this new discovery in Eftalou nobody (I mean: no orchidologist) believed that Ophrys phrygia was still around on Lesvos. But: Oh yes, It Is! 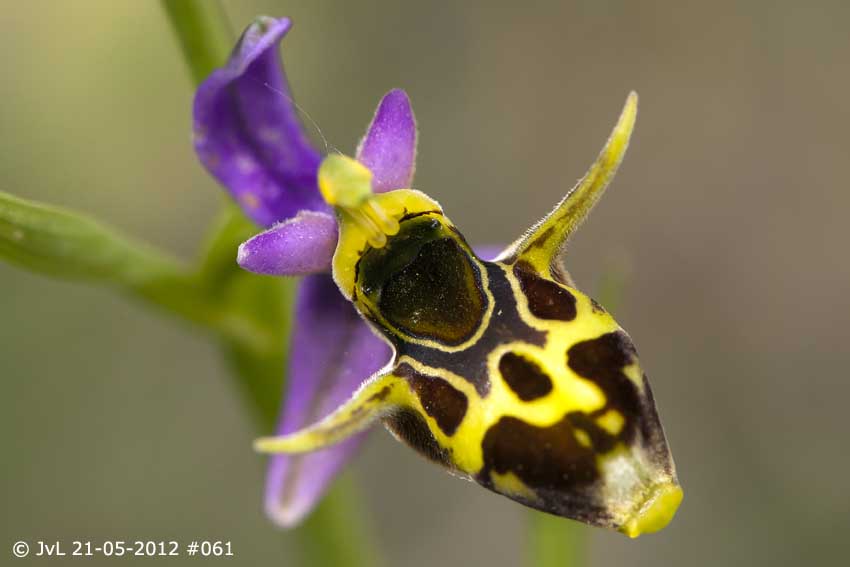 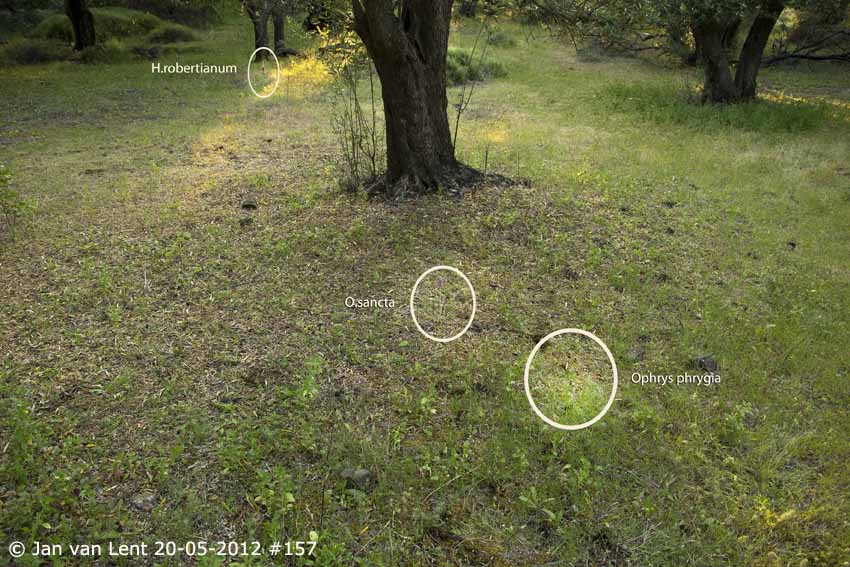 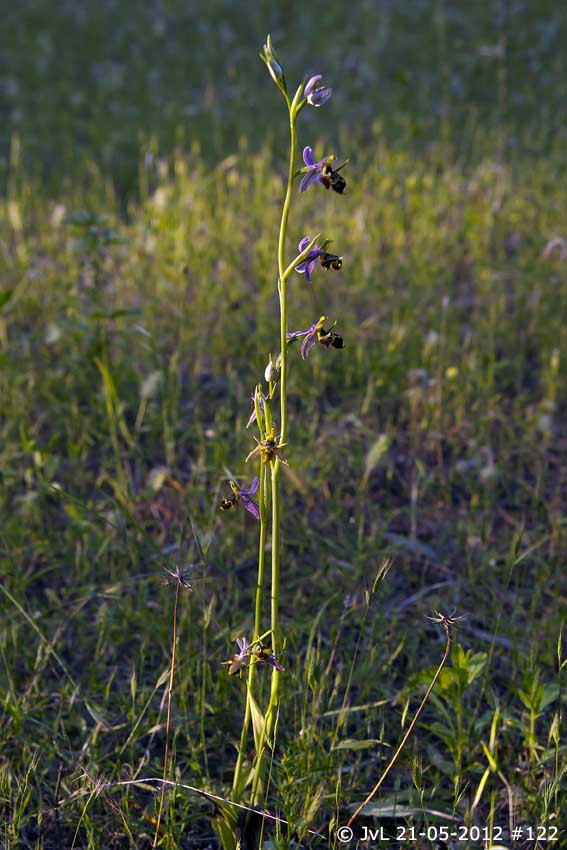 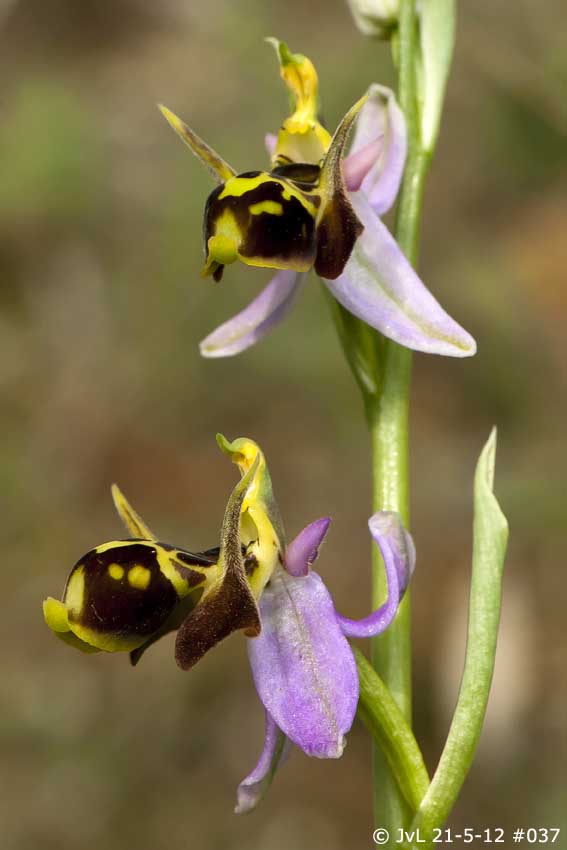 ETYMOLOGY:
Phrygia: After ancient Phrygia (an ancient country) in Asia Minor.
Ancient Phrygia was situated in the west of the Anatolian plateau (within the triangle of the cities Afyon, Eskisehir and Ankara) inTurkey. It was a country with many towns and cities, lying on the routes to the east and named after the western Indo-Europeans who came here from Europe around 1200 BC. (www.allaboutturkey.com/frig) 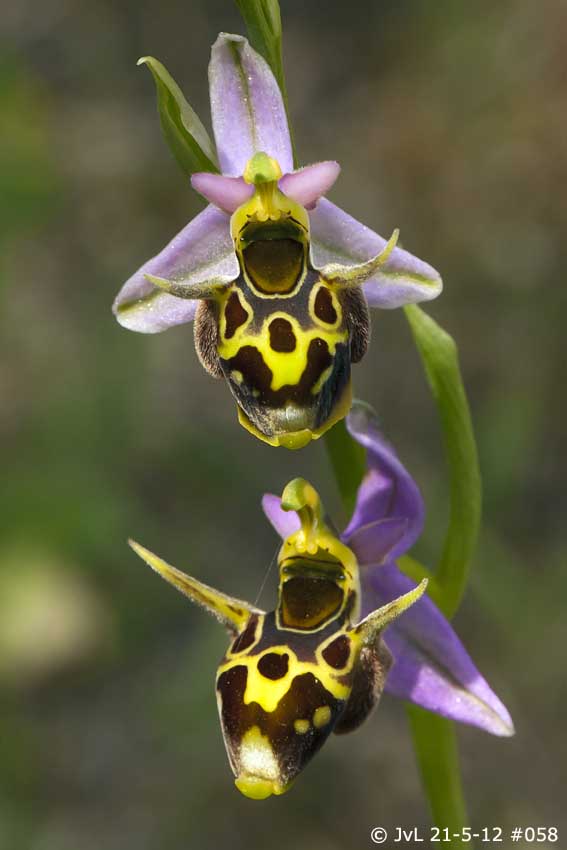 NAMES:
Joseph Friedrich Nicolaus Bornmüller (Bornm. 1862-1948) was a German botanist. He studied horticulture in Potsdam and travelled to the Balkans and Greece on his first botanical expedition in 1886. In 1887 and 1888 he worked at the Botanical Garden in Belgrade and during his subsequent career performed botanical studies widely throughout the Middle East, Asia Minor and southern Europe. Among Bornmüller's many publications was a treatise on Macedonian flora titled Beiträge zur Flora Mazedoniens (1925–1928). (source: Wikipedia) 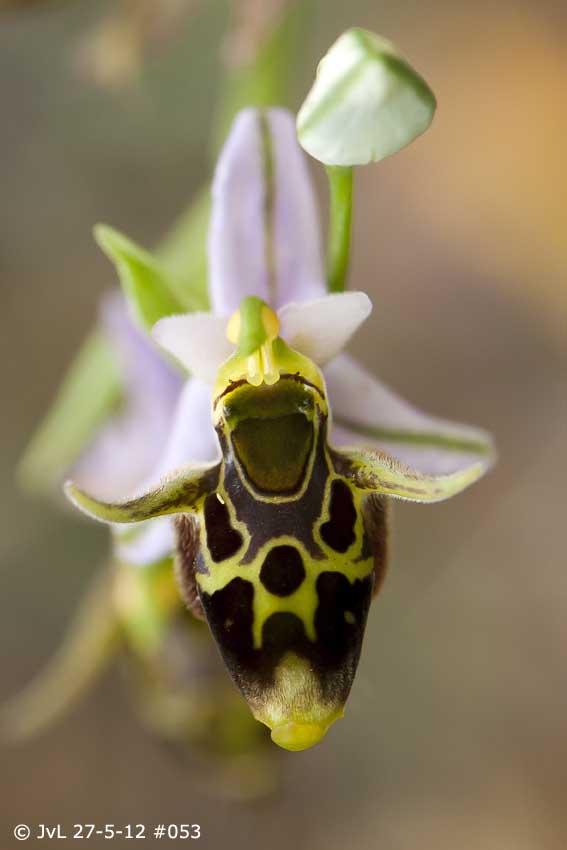 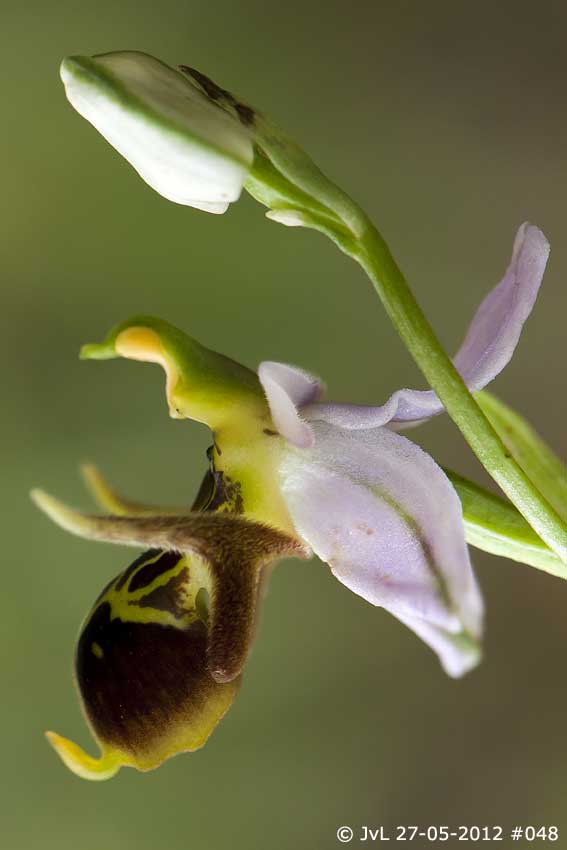 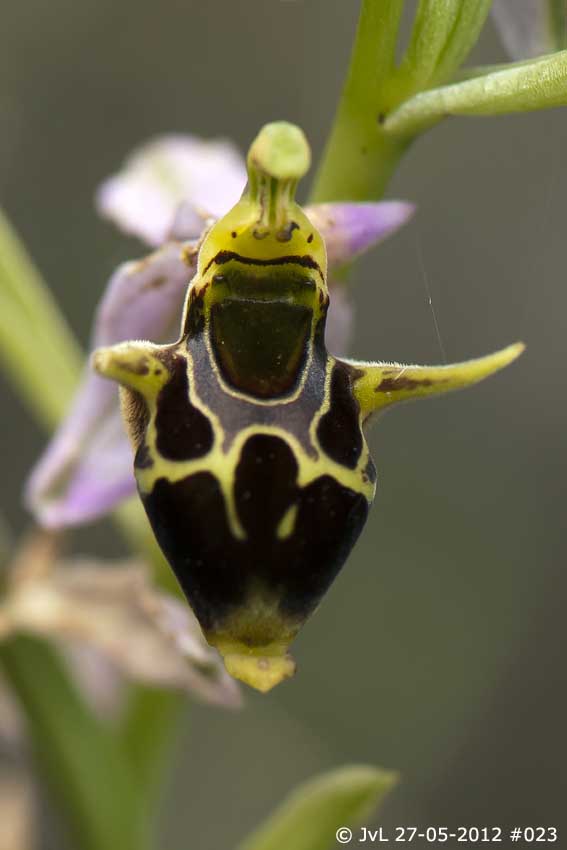