REMARKS: Ophrys ferrum-equinum and his fiancée ‘labiosa’ – always wearing a beautiful flared skirt – were everywhere to been seen this season; they were present at almost every field in the south of Lesvos. The first time I saw them dancing together this year was in the beginning of March around Pyrgi and they were still out there at the end of April. The first question in the field – is he ferrum-equinum and she labiosa – is not always easy to answer. Many orchid researchers decided to describe labiosa as a subspecies of Oph. ferrum-equinum, like KREUTZ did in 2004. Some ignore the different morphological features and just stay with ferrum-equinum. Others think Ophrys labiosa is a real independent species, like KREUTZ did earlier in 1997. And she has already been the talk of the ‘town’ for a long time, in fact since KREUTZ described Ophrys labiosa as an independent endemic (*) taxon from Turkey in 1997. Since then the rumours about her presence, looks & behaviour are numerous.

But there are some questions to be answered before they really can get married: Is ‘labiosa’ always in the proximity of ferrum-equinum, next to each other on the same habitat or also independent from each other on different habitats? In other words: Is she really going out with him? Or just once in a while? And what about their pollinator; does ‘she’ has the same lover as ‘him’ (Chalicodoma parietina)? And which orchid is nearby family, Ophrys mammosa from the mammosa-family or Ophrys lesbis from the argolica-family? Going through all my ferrum-equinum & labiosa photographs from recent years it strikes me that I have many more labiosa (70%) then ferrum-equinum (30%) in my database.

Conclusion 1: ‘Real’ ferrum-equinum is much more difficult to find on Lesvos than ‘real’ labiosa. Let’s see if this conclusion matches the opinion of other orchid researchers.

RESEARCH: BIEL (Lesvos 1999) about the Ophrys labiosa on the island: ‘the finding on 02.04.1998 in a flat olive grove west from Moria corresponds exactly with the description in KREUTZ 1998: 441*. Also if this just recently described species is only known from the SW of Turkey, no other classification seems possible. Additional orchids: Ophrys ferrum-equinum, iricolor, minutula, sicula, speculum. There exists indeed also a certain resemblance with the 44 shown & discussed plants from HAHN & PASSIN 1997, which they assigned to Ophrys aegean, the Lesvos plants however show a clearly smaller form of the lip and a earlier flowering time. As far as is known up to now, these findings may be the first proof of existence for Greece.’ (Translation: JvL)

*KREUTZ (Turkey 1998: 441) described in 1997/1998 Ophrys labiosa as an endemic* species from a small region between Mugla and Antalya in the southwest of Turkey; but changed his mind in 2004; after this date he described labiosa as a subspecies from ferrum-equinum.
In ‘The Orchids of Rhodes and Karpathos’ (2002) KREUTZ wrote: ‘On Karpathos, it (O. ferrum-equinum) is unusually pluriform and varies in the colour of the perianth segments, in the labellum shape and speculum shape. This confusing diversity has probably contributed to the fact that sometimes solitary plants have been identified as Ophrys gottfriediana or Ophrys spruneri.’

DEVILLERS et al (Lesvos 2010): Group of Ophrys mammosa: ‘Like many of the Lesbos orchids, Ophrys ferrum-equinum is limited to the eastern flank of the Olympos massif, the Spathi hills and their piedmont and the south-eastern peninsula (KARATZAS & KARATZA 2009). We saw stations of a few to a few tens of individuals on all visits in the first half of April, on 13 April 1990, 9-13 April 2003, and 6-14 April 2010. The “form labiosa” is by far the most common on Lesbos and it is the only one we saw. This raises the question of the status of Ophrys labiosa (s.l.). The species was described from South-western Anatolia (KREUTZ 1997) and the name has been applied to a variety of more or less similar plants in diverse locations. Though some of these are clearly morphs of 0. ferrum-equinum, their widespread occurrence may mask the existence of local, evolutionarily independent, taxa, in particular on Lesbos.’

PETROU et al (Greece 2011): ‘labiosa’ is just a variability of O. ferrum-equinum ssp. ferrum-equinum: ‘Its sole difference from the typical form is that the lip is constricted at its middle, so it appears long and wider at the tip, bell-shaped. It occurs either in pure populations or alongside the typical form, throughout the whole area of distribution.’
They also mentioned ‘parnassica’, ‘minor’ and ‘subtriloba’ as variability’s of O. ferrum-equinum ssp. ferrum-equinum.’ And they have a Note: ‘Here we disagree with KREUTZ (2004) who treats ‘labiosa’ as a subspecies, and agree with DELFORGE (2001) who, in a rare ‘unitive’ mood, thinks of the aforementioned taxa as simple expressions of the taxon’s variability’. ‘This taxon (O. ferrum-equinum) presents great variability in size and in shape of the lip and speculum, often within the same population, a fact which often leads to false identification and jubilant records of ‘new’ taxa. It may be confused with O.spruneri ssp. spruneri, which, however, has stronger colours, a trilobed lip and an H-shaped speculum; or with O. ferrum-equinum ssp. gottfriediana, which, however, has a limited distribution, a different lip shape, and often white or green sepals.’

DELFORGE (Europe, North Africa & the Middle East 2005) about O. ferrum-equinum: ‘Varied, and sometimes confused with O.argolica or incorrectly placed within its group. Numerous taxa have been described but all (‘labiosa’, ‘subtriloba’ & ‘parnassica’) fall within the range of variation of the nominative var. and often flower with it.’ And: ‘The eastern species, apparently influenced by O. mammosa s.l. (in particular O. ferrum-equinum), may in fact represent a relic, ancestral lineage, close to the common ancestor of the two groups (argolica & mammosa groups), rather than recently stabilised hybrid swarms.

ANTONOPOULOS (Greece 2009) treated both species as members of the Mammosa group, together with mammosa, spruneri, gottfriediana, grigoriana, hystera, hansreinhardii, helenae & leucophthalma. And he thought that the ‘real’ ferrum-equinum was not flowering on Lesvos because in his drawing on page 252 Lesvos is still a grey area.
‘Ophrys ferrum-equinum is recognized by the outspread lip with grey-violet marginal hairs on the shoulders and the shiny blue speculum which is not surrounded by a white line and does not reach the basal field of the lip.’ Ophrys ferrum-equinum subsp. labiosa – common on Lesbos: ‘A newly recognized subspecies, sometimes considered as a separate species, with a very convex lip and folded lip edges, which are spreading outwards only at the apical part of the lip, giving a conical appearance to it.’
Without going deeply into those groups – otherwise this blog will not end in the near future – I will put the ‘leader of the pack’ and some of its species I found on Lesvos next to each other, just to get a clear view.

Conclusion 2: Morphologically it looks if O. ferrum-equinum and labiosa have more to do with Oph. lesbis (from the argolica-group) than with Oph. mammosa.

In the field I consider all those different forms as varieties of Oph. ferrum-equinum. And there are a lot more varieties of the Horseshoe Ophrys; this season’s ferrum-equinum started with a ‘real’ Ophrys ferrum-equinum var. subtriloba described by Hayek but later on renamed by BIEL as var. anafiensis BIEL 2001. This variety is already for years flowering on the same habitat – Pyrgi – but I found also var. subtriloba in Alifantá. And it has indeed some similarities with Ophrys spruneri NYMAN, and that is maybe the reason that there were always rumours about the existence of Ophrys spruneri on Lesvos.

Conclusion 3: I agree with H&M above, I also think that all those differences in lips are just varieties; the question is from which species: ferrum-equinum or labiosa? It is just a pity that both gentlemen never visited Lesvos (?) – and clearly never read an article about the Orchids of Lesvos. Maybe that’s why they still believe that you can’t find neither Ophrys ferrum-equinum nor Ophrys labiosa flowering on Lesvos…

BOTTOM-LINE:  Ophrys ferrum-equinum has many different ‘faces’. So after we ‘clearly’ have established all morphologic differences between all Ophrys ferrum-equinum and labiosa varieties on Lesvos – and as clear as the differences between the two lovers are visible in the above picture it is almost never in the field – this question still arises:
Is she really going out with him? Always? Accordingly I checked all the habitats where he (O. ferrum-equinum), she (O. labiosa) or they (var. triloba, var. gottfriediana & var. grigoriana) were flowering in recent years and this is my conclusion 4: No, she is not always going out with him. I think she goes out dating with everybody who is flowering on her habitat so they might be all hybrids and/or varieties. But Ophrys lesbis is the one which – on Lesvos – is NEVER flowering in the neighbourhood of ferrum-equinum or labiosa but looks like a very close family member: is there a Highly Qualified Orchid Researcher around who is willing to compare the molecular data of Ophrys ferrum-equinum, labiosa and lesbis? And whilst doing so: can they take Ophrys spruneri into account as well? Thanks.

Again PEDERSEN & FAURHOLDT (2007): ‘This species (Ophrys ferrum-equinum) has a superficial resemblance to O. sphegodes subsp. spruneri which, however, can be readily recognised by its usually H-shaped mirror with distinct connections to the base of the lip.’

BIEL B. (Lesvos 1999) about Ophrys spruneri: ‘this finding of 02.04.1998, ca. 1.5km distant from the location of Ophrys labiosa, unfortunately was of only 1 plant in an olive grove WNW of Moria. This plant (the Lesvos- “variant”) did not exactly correspond to the typical Ophrys spruneri, which usually shows a smaller, round, 3-cut flower lip and often also 2-coloured lateral sepals. It maybe acts also here as an example of the op-positional influencing of various taxa in a narrow habitat, in evolutionary processes.’ (Translation: JvL)

*Endemic: limited to a certain region. Yes, but I really get a bit allergic of orchidologists who think they found a ‘new’ orchid in a ‘certain’ area, for instance a mountain on Rhodes or Chios or on the other side in Turkey and then claim this orchid as endemic. But how can they know this? Are they on ALL OTHER ISLANDS in Greece and Turkey AT THE SAME MOMENT, and IN THE SAME YEAR? Are some orchidologists really clairvoyant? 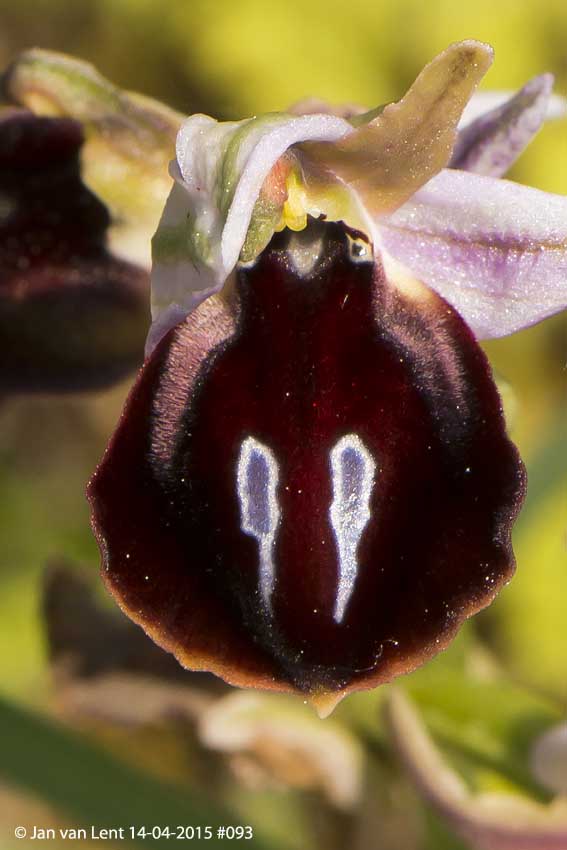 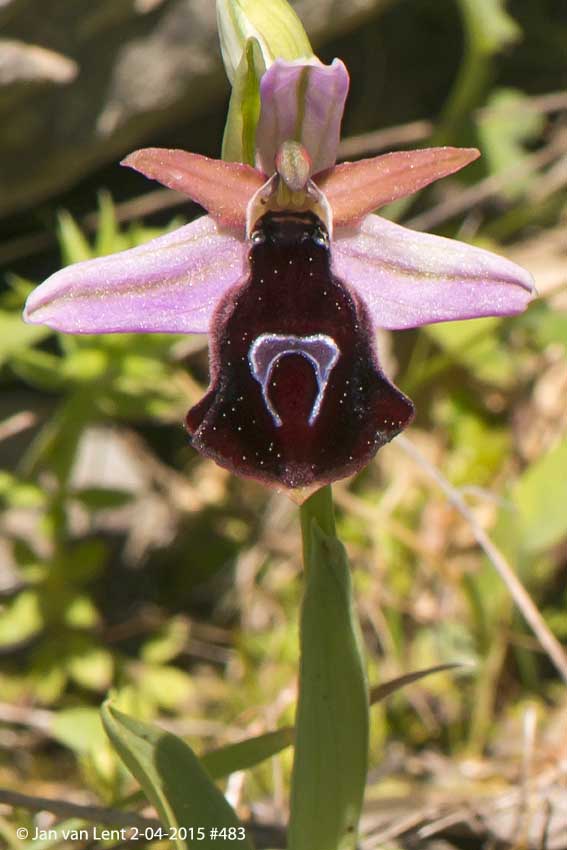 ETYMOLOGY: 'ferrum-equinum': horseshoe (the shape of the speculum); ‘labiosa’: having a big lip. Labiosus = uitmuntend. 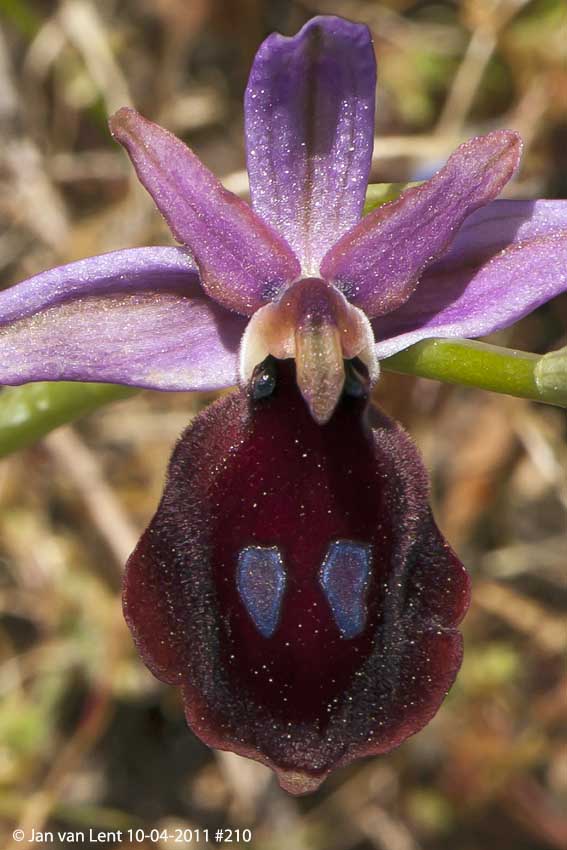 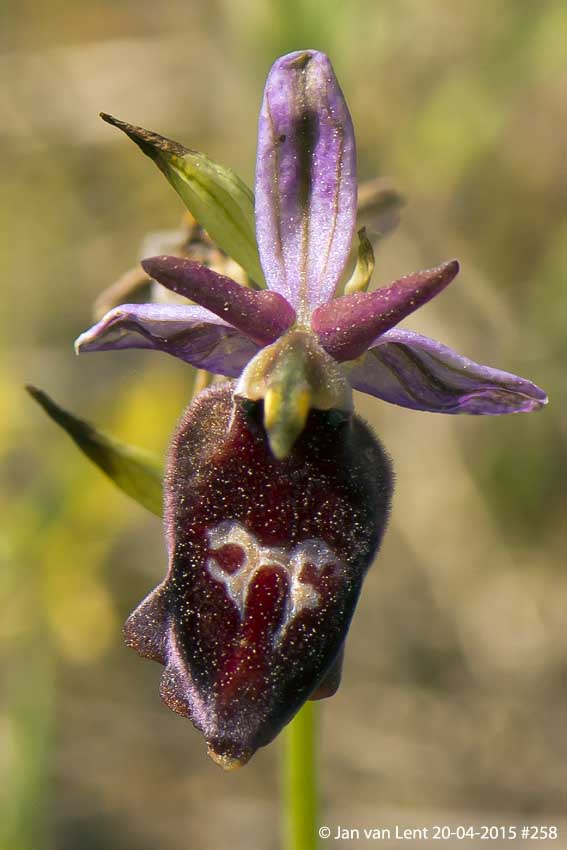 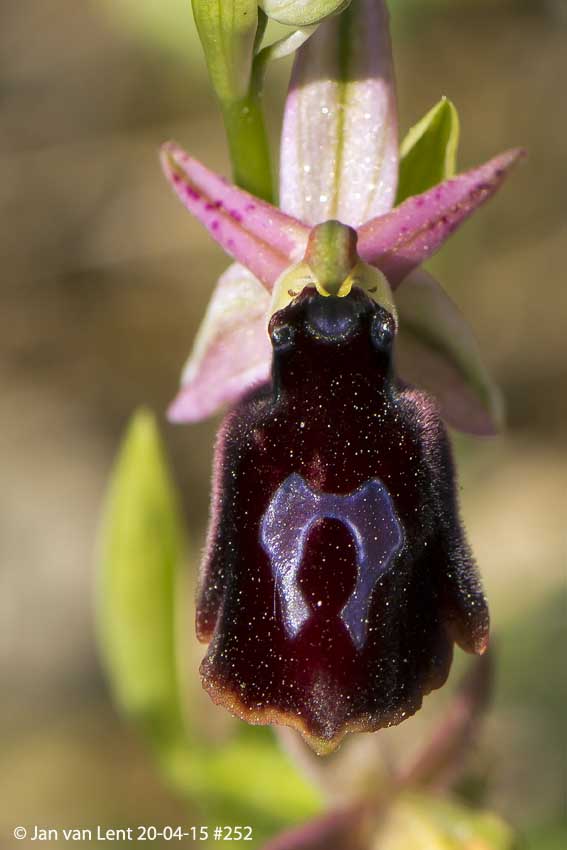 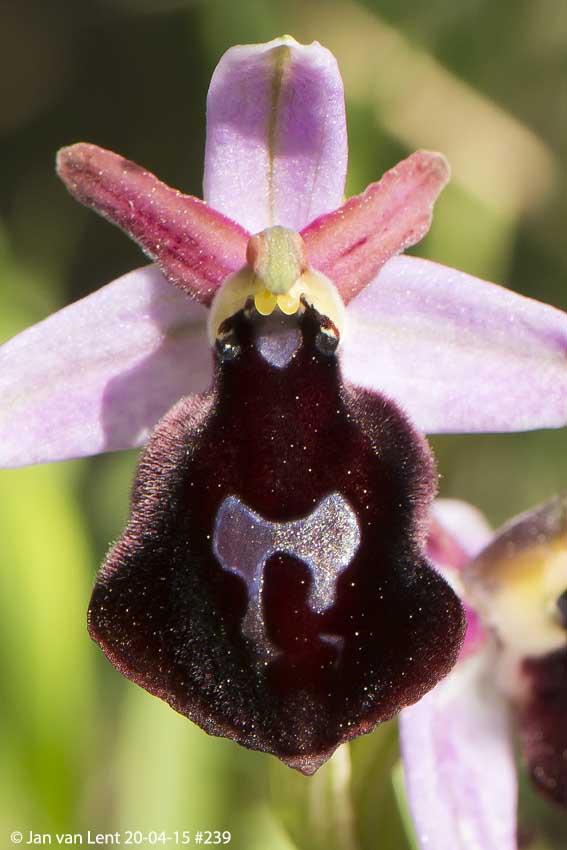 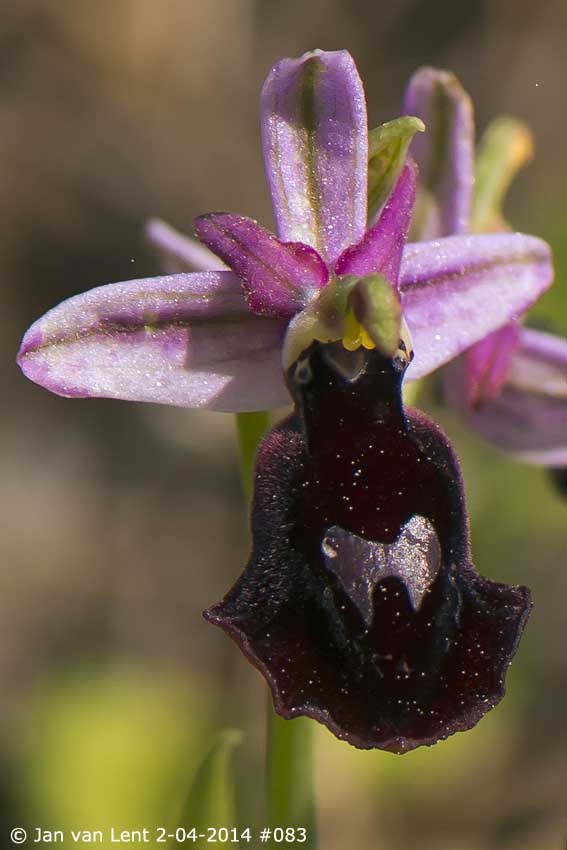 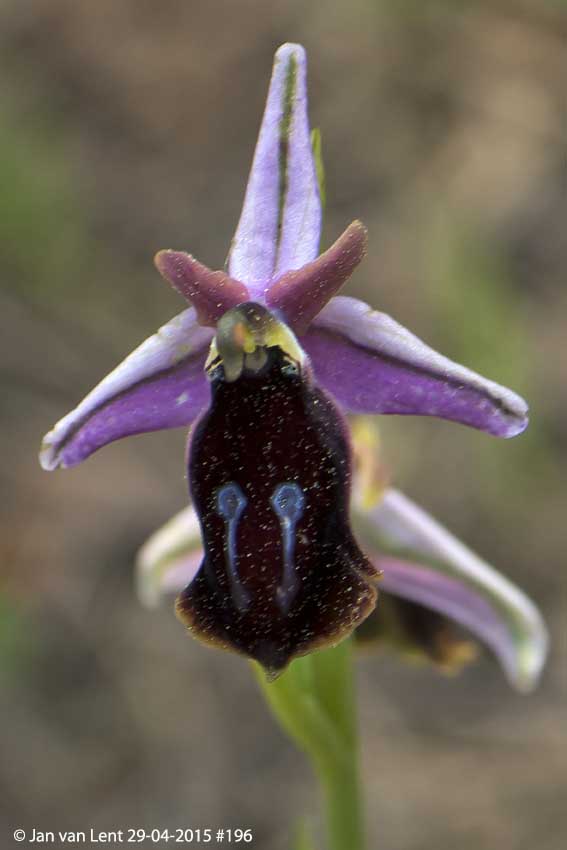 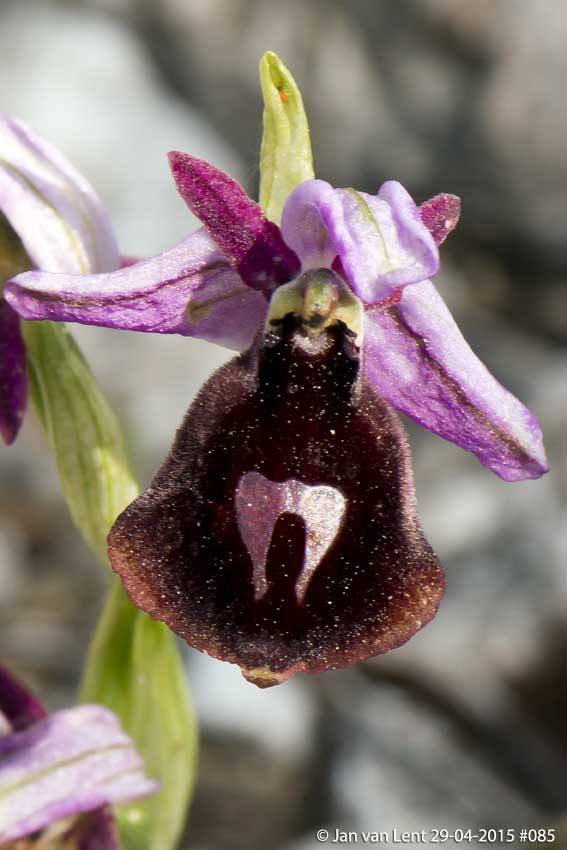 And then finally: Ophrys spruneri NYMANN 1855? 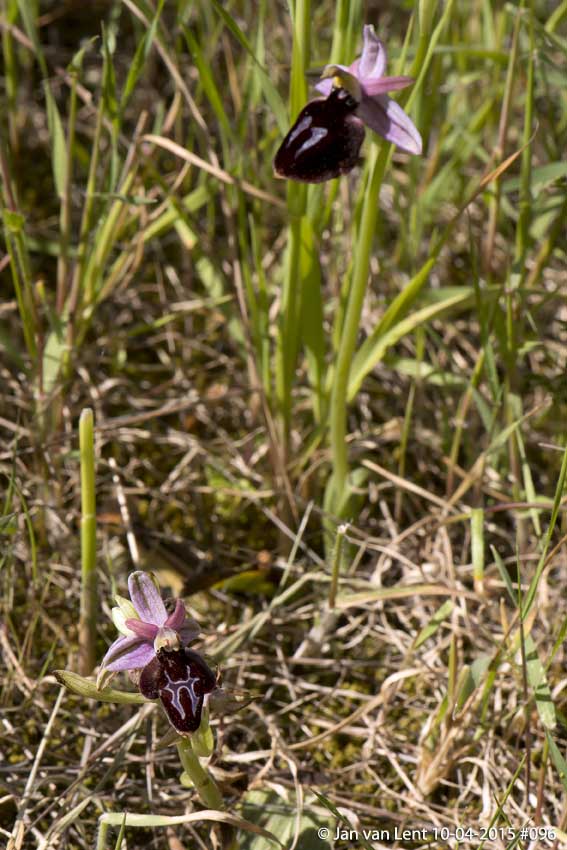 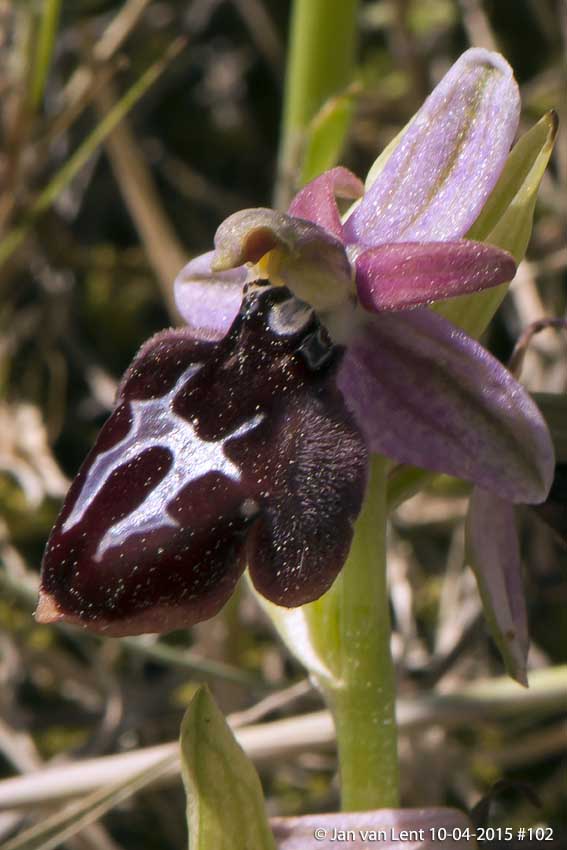