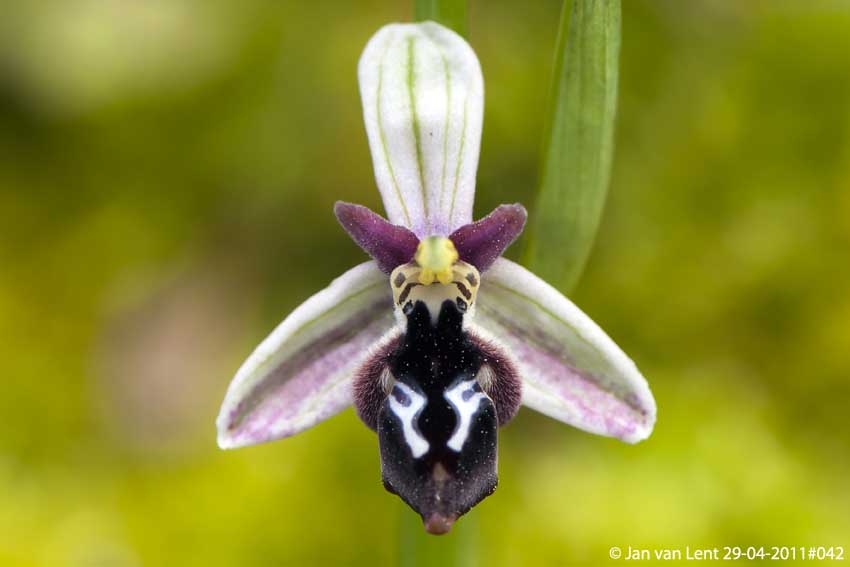 HUNTING: You actually don’t hunt Ophrys reinholdii on Lesvos, you meet it. A few years ago, when I went up to the Sanatorio above Agiasos in April to hunt down C. epipactoides and P. holmboei and to see if H. comperianum was already flowering, I always squeezed me through the prickly bushes opposite Sanatorio to make some photographs from this big spectacular, almost heavy Ophrys with its black lip. I never gave it a second thought, it was clearly Ophrys reinholdii  and ‘everyone’ agreed on it – name, habitat, island – , I thought. So, load it into the computer and wait until something comes up that will change that opinion.

Until two years ago that is.  Because then it disappeared completely from this habitat.

But it re-appeared miraculously on the parking spot in the pine forest before the Sanatorio, actually a few meters from where I once found H.comperianum standing in the middle of this parking space. O.reinholdii was standing on the side, actually exactly where you put your right foot when you step out of your car. The first time I saw it I missed it only by a few centimetres… I made the photographs and went into the forest on the other side of the road to look for H. comperianum (and Ophrys homeri, and Orchis quadripunctata). But what really attracted my attention was the number of habitats where I found Ophrys reinholdii this year (2014): Melies, Megalochori, Spides, Kournella, everywhere above 300 meters in the south I found Reinhold’s Ophrys. 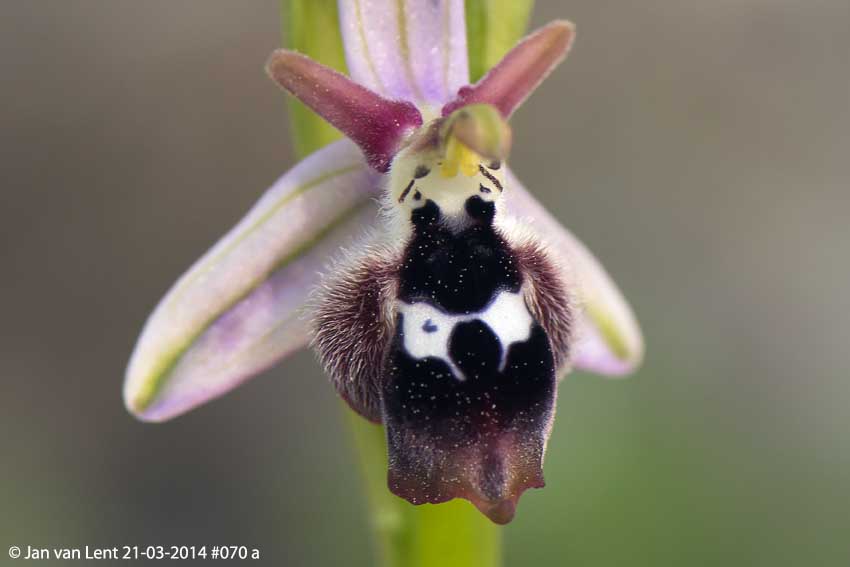 Still I didn’t give it a second thought, until last month. A friend sent me a few photographs of Ophrys reinholdii which he made on Lesvos and a link to Mike Taylor’s website (http://www.chiosnet.gr/tourism/nature/chios_wildflowers.htm) for an Ophrys straussii var. leucotaenia, which Mike found (together with Pandelis Saliaris) on Chios. And if there is an orchid flowering on our neighbour island of Chios it is also possible that it flowers on Lesvos isn’t it? So I looked at his picture and started up my computer ‘Ophrys reinholdii & strausii’ folders. ‘Straussii’ because I once found – in a gorge up from Megalochori – one different looking Ophrys reinholdii and I gave it as a working name ‘Ophrys straussii’. 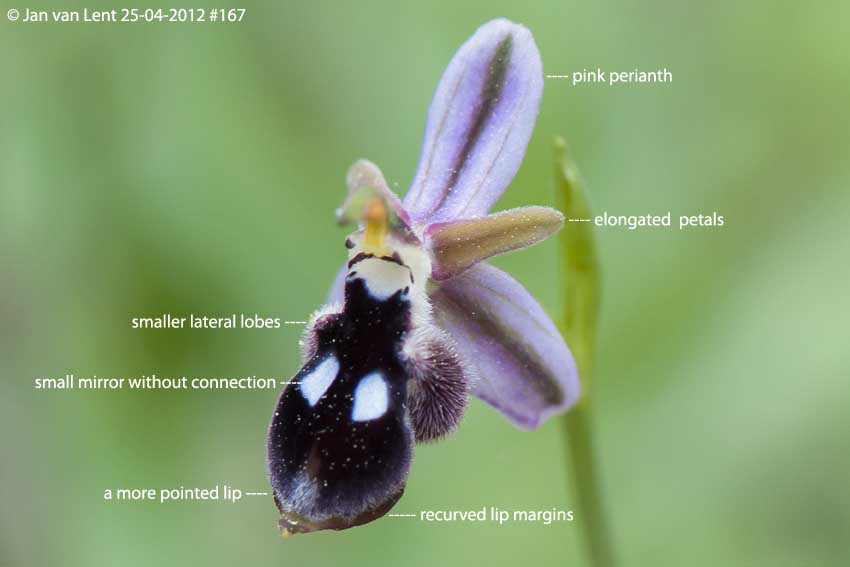 RESEARCH: But how wrong was I? And what are the differences between Oph. reinholdii & straussii?

Description Ophrys reinholdii: Well, that depends who you read. Ophrys reinholdii is so varied in colour of the perianth, the form & colour of the side lobes, the form of the central lobe and size/form of the speculum that everybody described it differently because they ARE all different. But for simplicity let’s say the middle lobe is black, brown-blackish or blackish-purple. And I never found two completely identical species. Because of this I will only quote the described differences between Ophrys reinholdii and Ophrys straussii.

PEDERSEN/FAURHOLDT (Europe 2007) recognises two subspecies of Ophrys reinholdii: subsp. reinholdii and subsp. straussii of which (in their opinion) only subsp. reinholdii is known in Europe. ‘Subsp. straussii differs from subsp. reinholdii in its smaller flowers with recurved lip margins and in the small speculum that is usually without connection to the lateral margins of the lip. In addition to the morphological characteristics, it flowers substantially later, with a peak in May.’
‘Subsp. straussii has been reported (but in all probability erroneously) from Chios and Rhodes. We are convinced that the individuals in question belong to subsp. reinholdii which occurs in any array of forms on those islands. The distribution (from ssp. straussii) extends from the province of Antalya in southern Anatolia through to Iran and Iraq in the east. Additionally, this subspecies was recently found at one locality in Cyprus. [Not confirmed from Europe; Ana, Cyp].’

PETROU et al (2011): ‘In Chios and Rhodes we have found populations similar to Ophrys strausii and Oph. strausii var. leucotaenia. These plants have a pink perianth, narrower elongated petals, smaller lateral lobes, a more pointed lip, and a simpler speculum than O.reinholdii, usually two separate white spots, often joined by a wide white band.’
Occurrences of this species in Greece are not confirmed. Only BUTLER (1991) and DELFORGE (1995, 2001, 2005) record it on Rhodes.

TAYLOR (Chios 2012) shows in his book only Ophrys reinholdii but surprisingly also Ophrys ariadnae H.F.PAULUS 1994. But about O.straussii var. leucotenia (on his website http://www.chiosnet.gr/tourism/nature/chios_wildflowers.htm):’Ophrys straussii and the closely related Ophrys reinholdii have been known to occur on Chios since the early 1990′s when they were found in two localities in the northwest growing amongst oak trees where they flower in March and April. In May 2003 I found, in the company of Pandelis Saliaris, eight plants of O.straussii var. leucotenia at about 2000 ft altitude on the northern slopes of Pelinaeon in open pine woods. The type locality of this variety is in the Antalya region of southwest Turkey where it is known only from six sites, hitherto the only known locations until its discovery on Chios.’

BOTTOM-LINE: Well, does this research helped me in any way? Some orchidologists thought they recognized subsp. straussii on Chios and Rodes. Reading the descriptions of Ophrys straussii (or maybe more accurate: Ophrys reinholdii subsp. straussii) I think that ‘we’ have also subsp. straussii on Lesvos. And maybe, if you search very thoroughly, you will find both species on separate habitats on all the Aegean islands. Other orchidologists declare that subsp. reinholdii flowers only in Europe and subsp. straussii in Turkey, Iran and Iraq. Lesvos is very close to – and in the elbow of – Turkey. So is the Lesvian flora (and the Aegean islands flora) only European or maybe also influenced by Asia Minor or Turkey (more accurate: the Ottoman Empire) which was for 400 years the occupying force here ? And let’s not forget that some of the islands (like Lesvos) once – million of years ago – were part of Asian Minor…

KREUTZ (Turkey 1998) Ophrys straussii var. leucotenia: ‘Distinguished from Ophrys straussii because of the brightly coloured, extended and frequently very white speculum, the upwards thick white hairy side lobes of the lip and the mostly whitish coloured sepals.’ (Vert. JvL). Ah, yes, that will make a very big difference…
And why is there no Ophrys reinholdii var. leucotaenia yet, gentlemen? 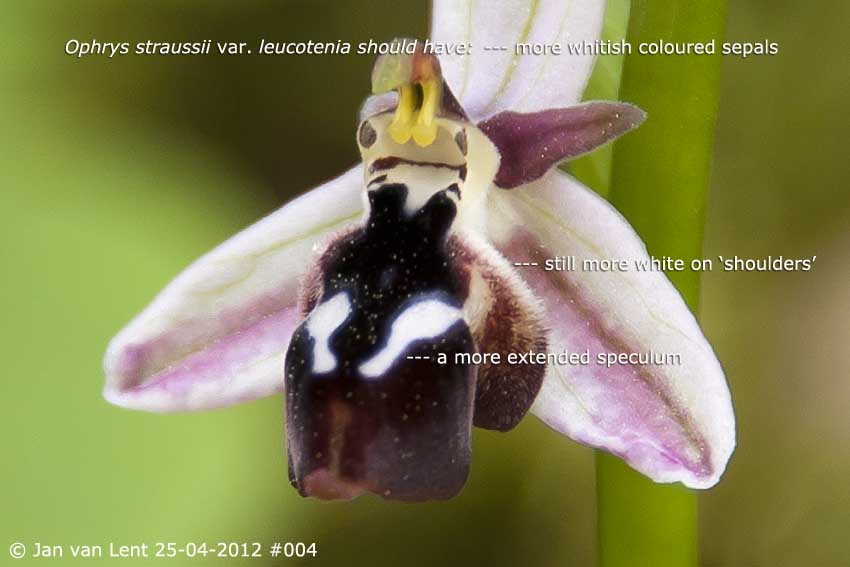