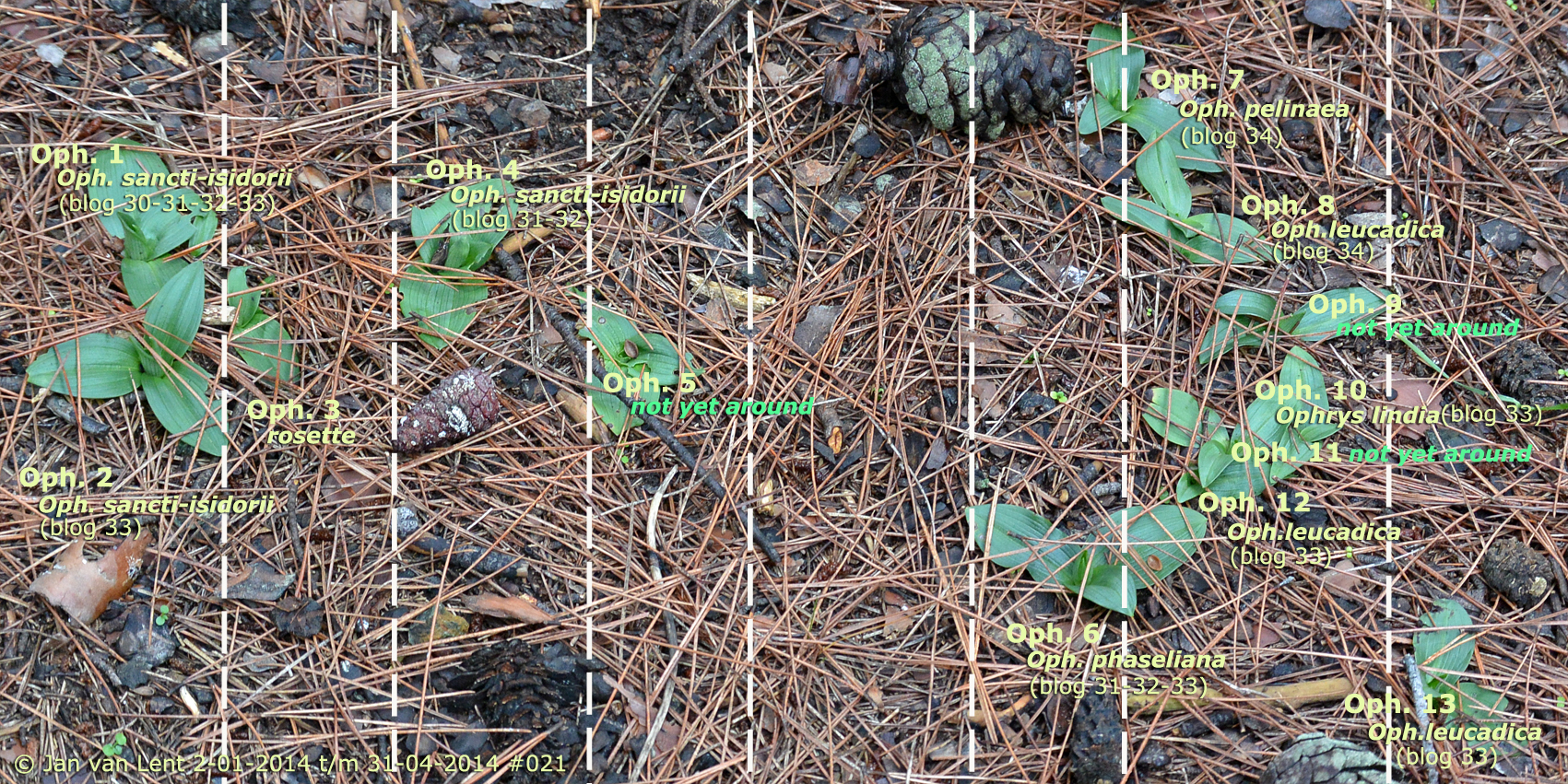 CONTINUATION from blog 30, 31, 32 & 33: The story of an ‘ordinary’ Ophrys fusca group, somewhere next to a parking spot in a Lesvos pine forest along the ‘highway’ to Mytilini in the neighbourhood of Lambou Mili.

Sadly enough there are today (7-03-2014) only two Ophrys left: Ophrys lindia & a newly flowering Ophrys leucadica, plant 8.  All the others are broken, eaten, stepped on and – plant 6 Oph. phaseliana - even completely VANISHED from the spot. But I’ve got photographs from this fusca-group from March 2011, 2012 and 2013. So I can compare these Ophrys from year to year. 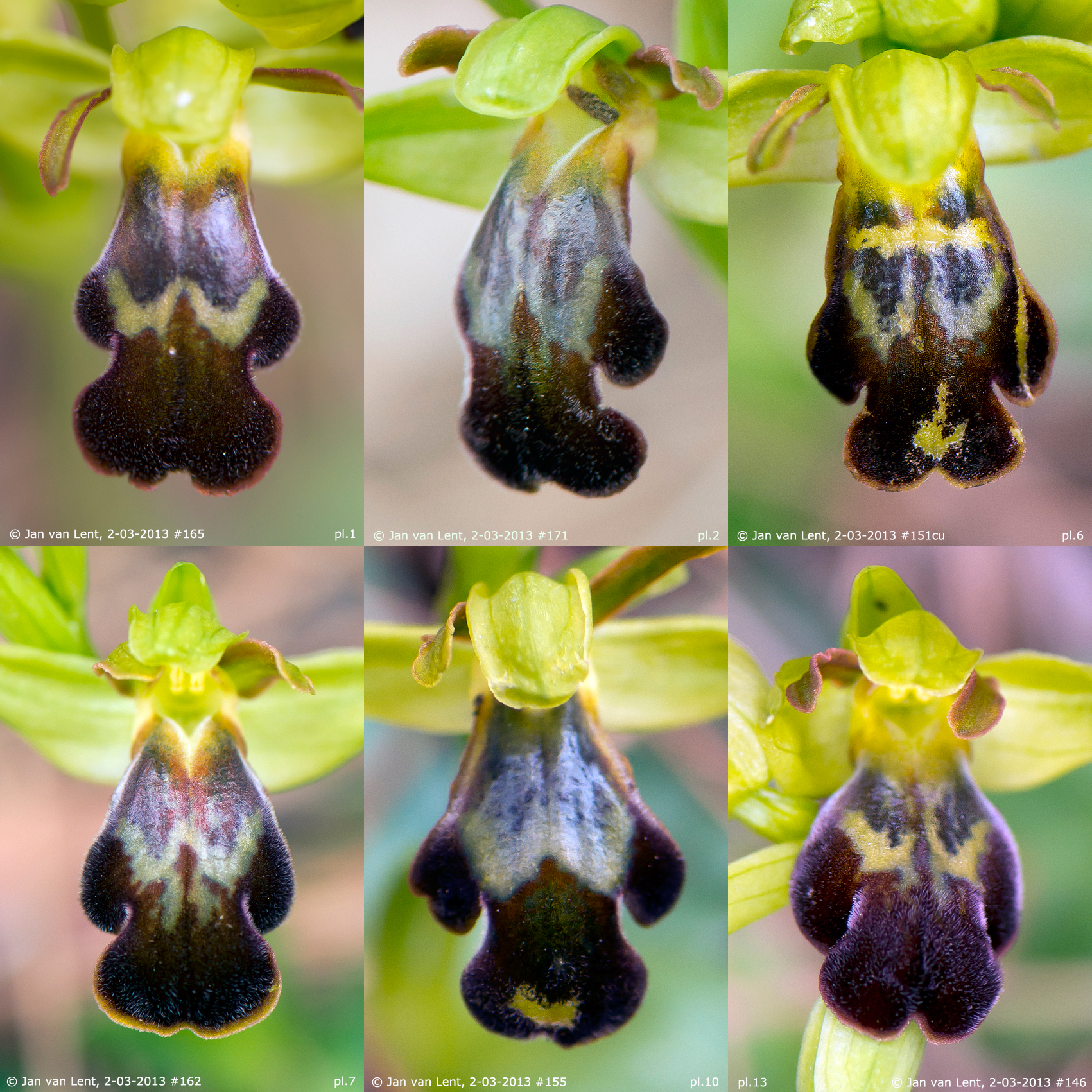 2 years ago, on the 19th of March 2012, 4 plants were flowering: Plants 1 and 2, both Oph. sancti-isidorii; plant 4 Oph. sancti-isidorii was also flowering a did plant 6: O. phaseliana. The lip of O.phaseliana had a more reddish colour but otherwise it looks the same as in the other years.

BOTTOM-LINE: Observing that all those Ophrys fusca subspecies sometimes flower together for years, often at the same time (February-March!), next to each other on the same habitat, – and to make it a little bit more confusing,  they are all brown, with a white W and some blue in the speculum – it makes me wonder how orchid specialists (professors and orchidologists) who are visiting the Greek islands for just one or two weeks between April and June could have known what they have seen and how they could give a ‘new’ name (and of course their own name as author) to those orchids…

I’ve noticed that there is something ‘strange’ with plant 4, which was in 2012 clearly Oph. sancti-isidorii but in 2011 the same plant looked like a hybrid between Oph. phaseliana and Oph. sancti-isidorii. Was it in earlier years Ophrys phaseliana or even Ophrys pelinaea which developed through 3 or 4 years into Oph. sancti-isidorii?
And are there maybe more Ophrys on this spot which disguised themselves as something which they were not? We will figure that out in the next episode of ‘Sooner or Later’! 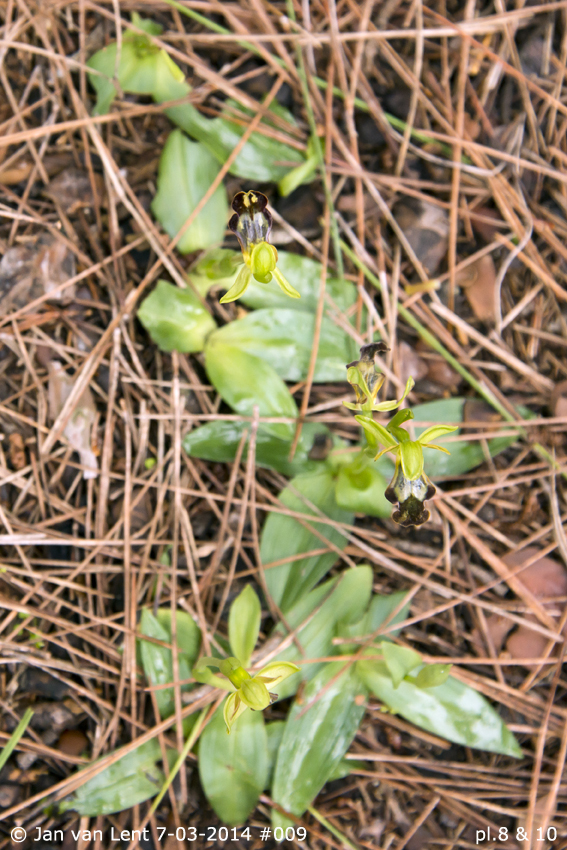 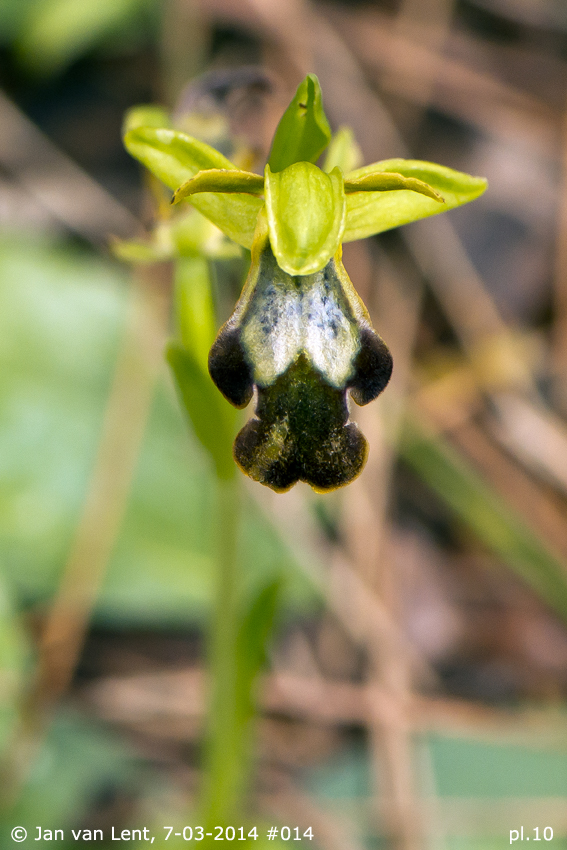 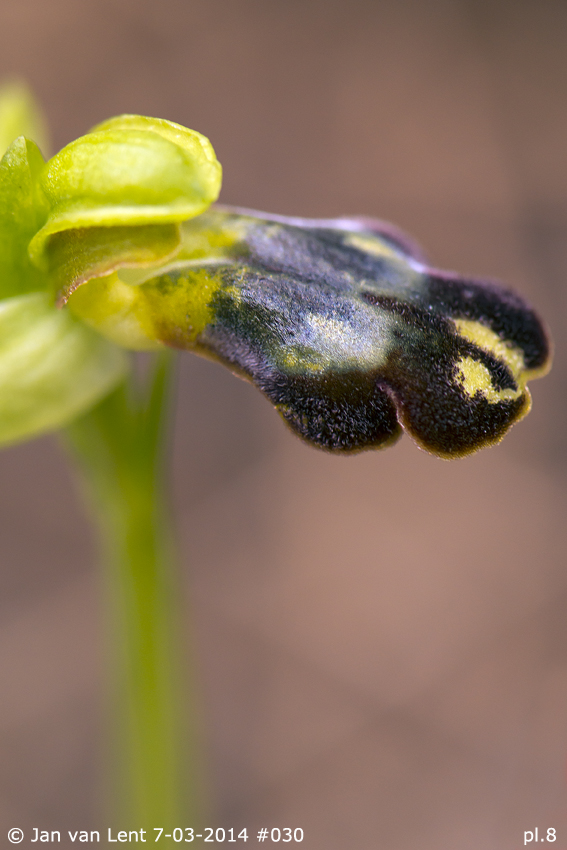 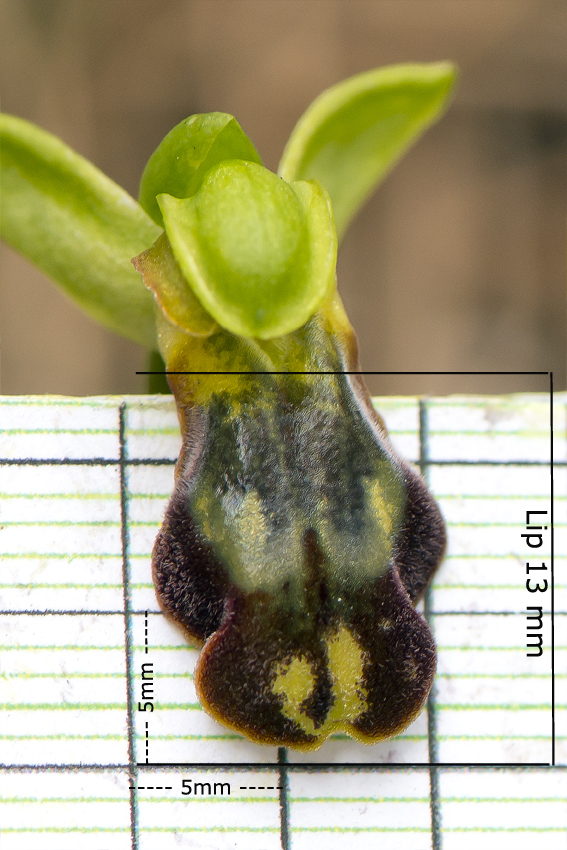 So only 2 survivers in March 2014. What a contrast with the beginning of March 2013 when there were 6 plants in flower! Let’s have a sentimental journey in time. 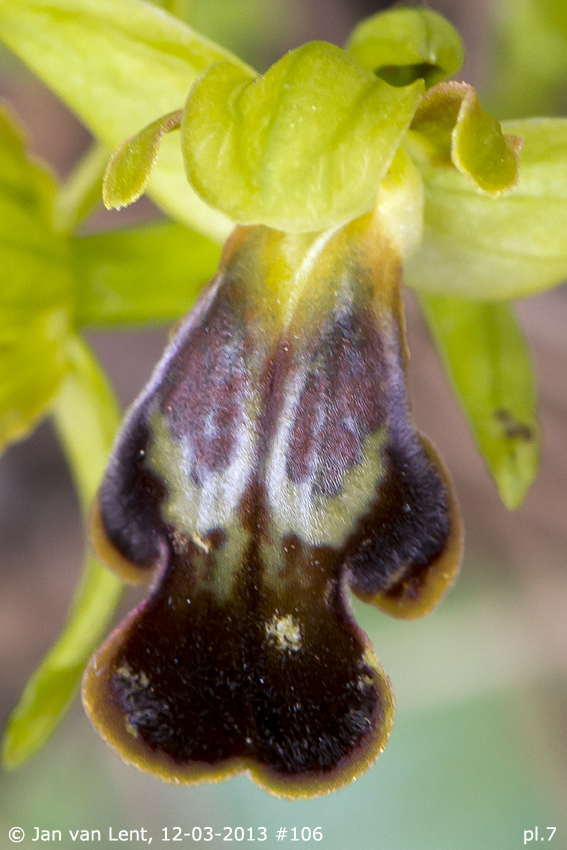 ETYMOLOGY: ‘pelinaea’ from Mt.Pelinaio, the mountain on Chios where this Ophrys was first described by DELFORGE in 2007. 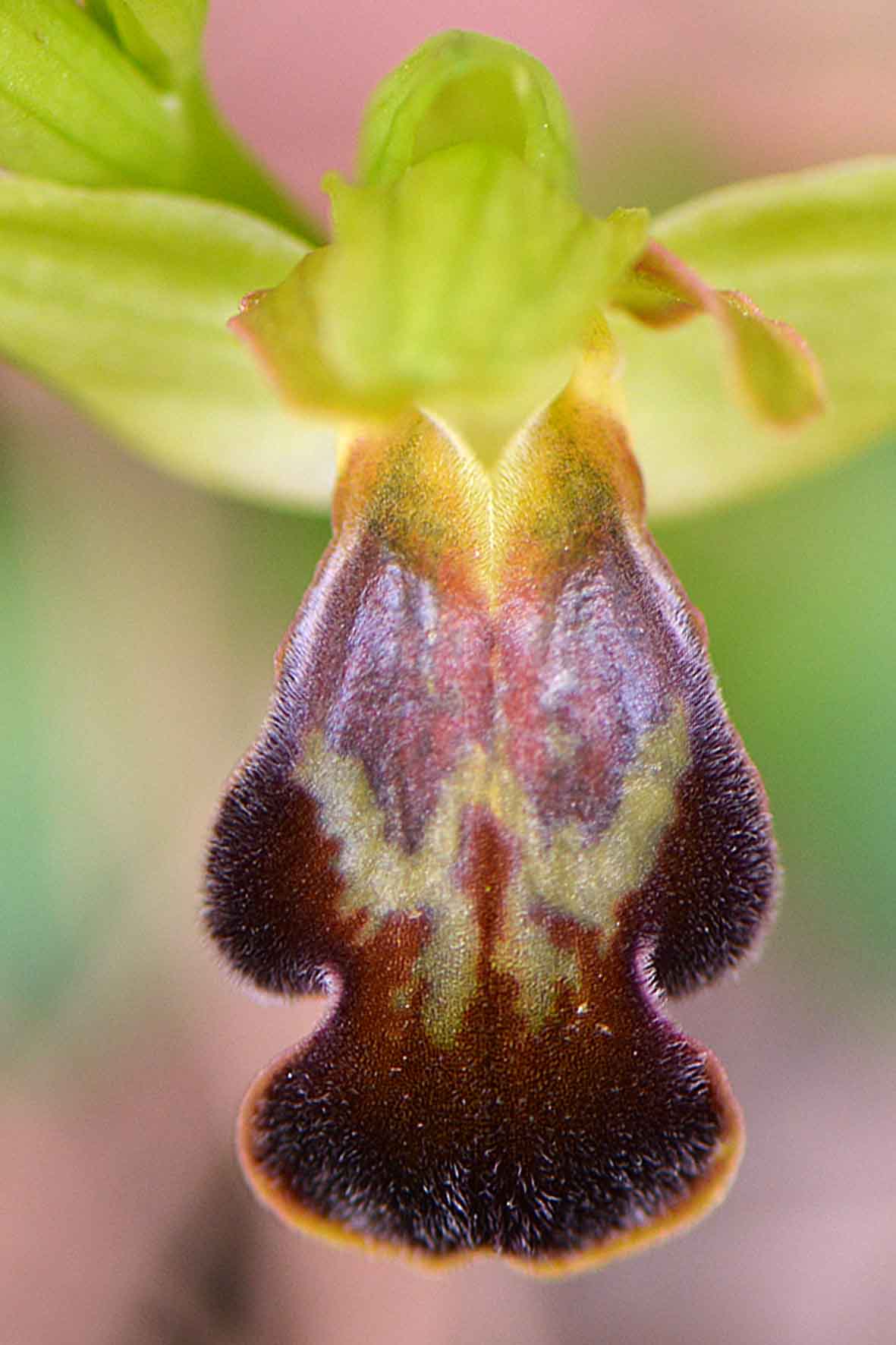 ANTONOPOULOS, Ophrys pelinaea: ‘In 2007 DELFORGE discerned on Chios the existence of a species of Ophrys with an appearance described as intermediate between Ophrys sitiaca and Ophrys leucadica, but with a rather later flowering period (1 month later) than the typical Ophrys sitiaca of the island. This new species was named Ophrys pelinaea and appears to belong to the attaviria group. It has large flowers, with a lip of 13-20mm in length which has a large, round middle lobe recalling that of Ophrys omegaifera. In addition the speculum is delimitated in the lower region by a wide white line in the form of a Greek letter ‘w’, however, the basal lip region of the lip always exhibits a V-shaped groove, in contrast to Ophrys sitiaca and omegaifera. This species exists certainly in abundance on Lesbos and Samos, apart from Chios. Flowering time, end March, early May.’ 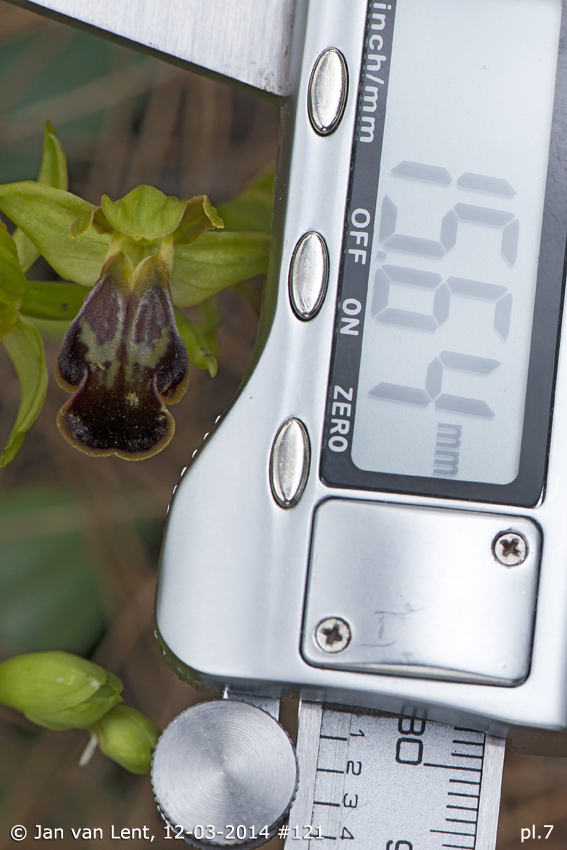 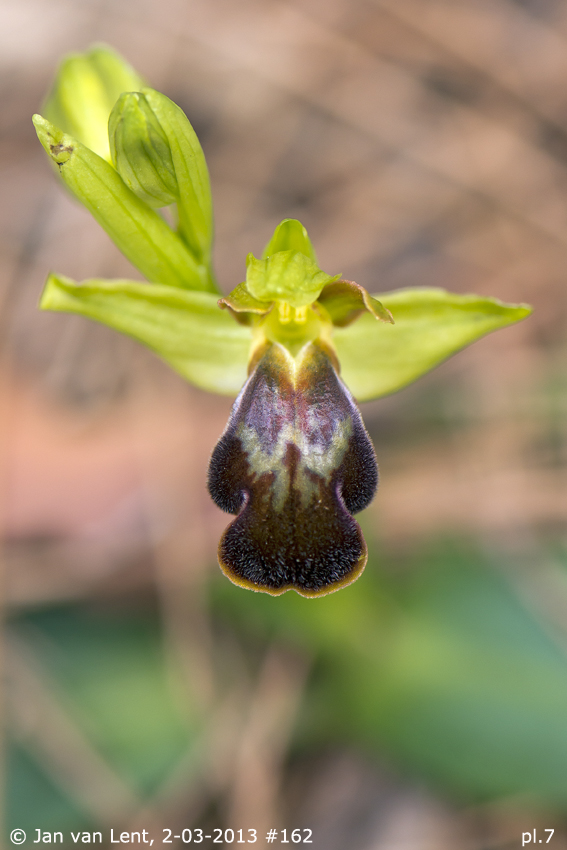