REMARKS: It was and is hard to concentrate on something as frivolous as orchids with so much tragedy and drama in front of us: last year we saw thousands of boat refugees landing on the beaches in front of our house and walking on their endless way to Mytilini and Europe: Such a Shame! But since the Dutch Prime Minister ordered all refugees to stay home and another politician dictated that they should be put back on a ferry back to Turkey; after Europe gave billions to Erdogan who had already made billions through the refugee-smugglers and after NATO-warships are controlling ‘our’ waters it is all very quiet on the Eftalou front: there are almost no refugees on the ‘boulevard’ and in the sea between Molivos and Skala Sikaminea…Even the orchids in Eftalou are very quiet and still in their rosettes. Himantoglossum robertianum – which was the first flowering orchid in Eftalou, last year on the 1st of February – is still hiding away between its leaves.

HUNTING: It was cold & wet at the beginning of January so I expected the orchids on Lesvos to be late this year. But to be sure I went to the Aspros Glaros, the ‘white gulls’ in the hills between Kalloni and Lambou Mili. And there was one of the Ophrys – which I followed for the last three years, distinguishable by its reddish ‘orbit’ around the stigmatic cavity – already flowering: Ophrys sancti-isidorii x sitiaca, a hybrid between Ophrys sancti-isidorii and Ophrys sitiaca. Both parent species will arrive on this habitat a week or so later. 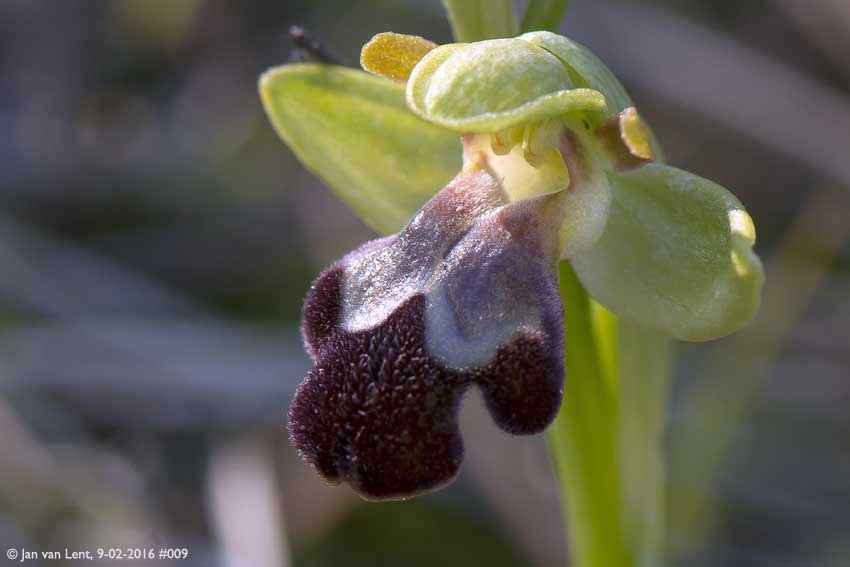 Ophrys sancti-isidorii and Ophrys sitiaca are – with their hybrids – on the whole island the first flowering species of this inconceivably difficult to distinguish fusca group. (See also blog’s no: 29: DNA & Golden Orchid Awards, http://www.janvanlent.com/blog/?p=2372 & 41: ‘Losing my Religion? http://www.janvanlent.com/blog/?p=3590) Sometimes I wish that the first flowering orchid would be a simple Dactylorhiza romana – because we have only D. romana on Lesvos – or for that matter an almost as difficult to determine Orchis morio (sub)species. But no, it is always Ophrys sancti-isidorii, Ophrys sitiaca* or a hybrid between those two. In an attempt to overcome the difficulty of – for instance the fusca group – ANTONIS ALIBERTIS (2015) described some new fusca species in his ‘The self-sown orchids of Greece, A reference book’ which he published last year. One of those ‘new’ species he described: Ophrys fusca ssp. hymettia (nom.prov.) is a look-a-like of Ophrys sancti-isidorii x sitiaca.
I admire him. I admire everybody who dares to publish a book with more than 600 pages and thousands of very beautiful photographs, let alone one on a subject as difficult as the orchids of the whole of Greece. And what an interesting book it is, I spent almost a half year studying it. And what I admire most is that he dares to write that after more than 30 years study on the Greek orchids he doesn’t know fur sure which name to put exactly on which fusca species, or for that matter, an oestrifera species. Bravo! There are enough orchid ‘researchers’ who put a name on (and preferable also their own name behind) a late flowering fusca species after visiting a Greek island only once or twice in April… 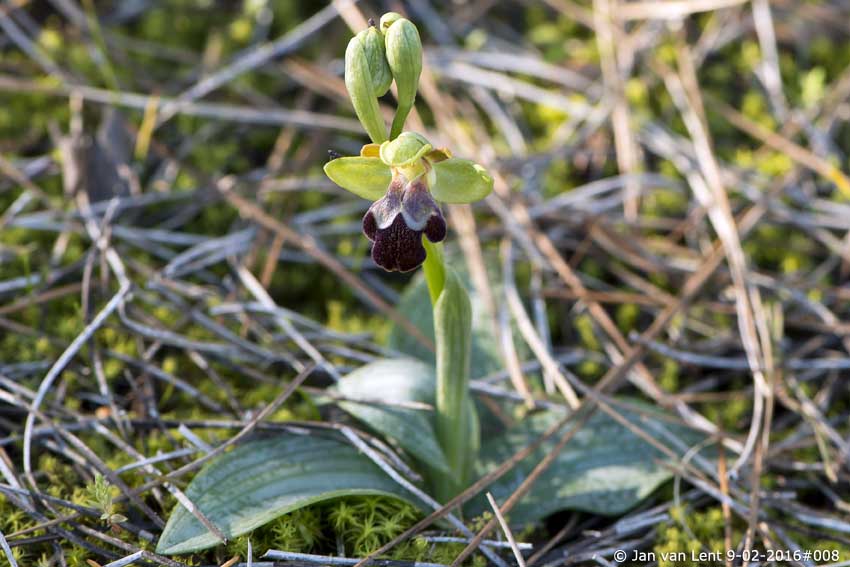 RESEARCH: In order to understand the fusca group all the better ALIBERTIS described 26 different Ophrys fusca subspecies in his PSEUDOPHRYS fusca chapter from which – in his opinion – there are only two flowering for certain on Lesvos: Ophrys pelinaea & theophrasti* (?!). Okay, probably also Ophrys cesmeensis, cinereophila and phaseliana from the fusca group because Lesvos is situated in the East-Aegean region. Well ALIBERTIS, that’s only a fistful of fusca’s, what a relief for a struggling orchidologist like myself! That makes for a lot of room on my hard disks… It is of course not strange that ALIBERTIS described ten (10!) fusca (sub)species from Chios because he researched Chios intensively and, together with SALIARIS, he describes Ophrys sancti-isidorii from Chios (see blog no: 41: ‘Losing my Religion? http://www.janvanlent.com/blog/?p=3590). 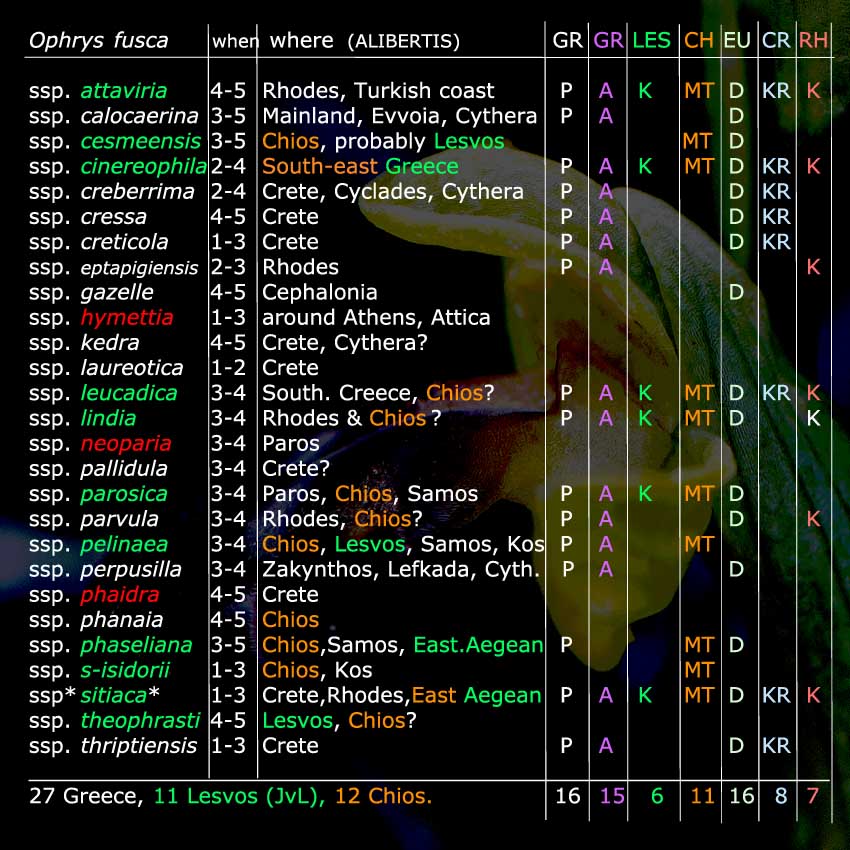 List of all 26 Ophrys fusca (sub)species & 1 omegaifera* (sub)species described by ALIBERTIS (2015)*; the red names are newly described by him, the green ones are – in my opinion – also flowering on Lesvos; the 12 orange ones are according to Alibertis flowering on Chios, the 6 green ones on Lesvos.
GR + P = Greece: Petrou*; GR + A = Greece: Antonopoulos*; LES + K = Lesvos: Karatzas*; CH + MT = Chios: Mike Taylor*; EU + D = Europe: Delforge*; CR + KR = Crete: Kretzschmar*; RH + K= Rhodes: Kreutz*.
* I also included  Ophrys omegaifera ssp. sitiaca in this Ophrys fusca list.

Is this Greek Ophrys fusca list of ALIBERTIS (2015) completely different from other orchid researchers? Yes and no, it is just a longer list, even longer – thus more specific – than any other fusca list from Greece. That makes ALIBERTIS (2015) actually a bigger ‘splitter’ than ‘master splitter’ DELFORGE (2005)! Is that bad? No, during those 10 years there were a lot of ‘new’ Ophrys fusca species described in Europe and ALIBERTIS just tries to fit in those newly described fusca’s in his Greek Ophrys fusca list. And introduces ‘only‘ 3 new ones. His Ophrys fusca chapter should make it eventually easier to put a name on specific Greek fusca species. There are hundreds, maybe thousands of different Ophrys fusca species, subspecies, varieties and hybrids all over Europe, the challenge is to describe and/or photograph – and publish all those differences so clearly that we have, in the end, a clearer idea how Ophrys – not only those Ophrys fusca species – evolve through the years, pollinated by specific insects and in specific habitats. And ALIBERTIS book contributes a lot to this.

BOTTOM-LINE: But is ALIBERTIS sure that there are only 5 fusca (sub)species flowering on Lesvos? No, of course he is not; he lives on Crete and therefore researched the orchids on Crete intensively – he published 3 books on the orchids of Crete – visited and researched a lot of places on the mainland and the islands and also visited Lesvos maybe once or twice. But you can’t be in every place and island of Greece at the same time in the ‘hunting’ season, not even in more than 30 years! And that applies for all orchid researchers and orchidologists and also for me here on Lesvos. We take just samples, we decided where to go and what to describe or photograph in those 5 months we have before the orchids wither and disappear again. Of the thousands of other – not found, not described, not photographed orchids – you will never hear or see anything. I think that a lot of the fusca (and iricolor, blitopertha, omegaifera and even oestrifera groups) are flowering from time to time all over all the islands and mainland of Greece. There is just not enough orchid researching manpower – and time in the orchid season – to confirm this, not in Europe, Greece nor – for example – Lesvos! So please, forget that greedy word ‘endemic’. In my opinion it stands for ‘only here, in my country, my island, my habitat, it’s mine!’ Such a shame!

PS: After 2 weeks of warm & some wet days Himantoglossum robertianum finally arrived in Eftalou on the 14th of February, five Ophrys (lutea ssp.) sicula on the 21st of February and boat refugees on the whole island shortly afterwards…