Habitat: at the corner behind Sanatorio – up from Agiasos. 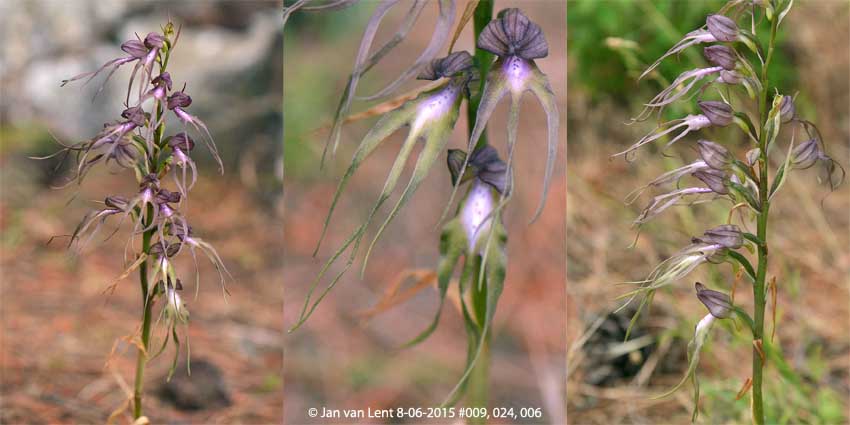 REMARKS: This big hybrid – with its octopus-like tentacles – between Himantoglossum comperianum and Himantoglossum montis-tauri was described for the first time by I. Karatzas – accompanied by the orchid researchers A. Alibertis and P. Saliaris – in 2004, on the steep corner on the road above the village of Agiasos to the chestnut forest. They christened it with the name X Comptoglossum agiasense I. KARATZAS.
In those days it was indeed Comperia comperiana instead of Himantoglossum comperianum; the name Karatzas gave to the hybrid was at that time fully correct. But there is no genus Comperia or Barlia anymore after DELFORGE’s (2005) analysis of the genus Himantoglossum. Today the correct name should be: Himantoglossum x agiasense I. KARATZAS 2004.

And gentlemen, don’t get smart now and don’t come up next month with an H. jankae ssp.
agiasense (KARATZAS) KREUTZ/ DELFORGE/ H&M 2015 or… (please fill in your name and your ‘discovery’ in capital letters).

HABITAT: I found a flowering Himantoglossum agiasense for the first time in 2011, almost withered but still recognizable. Also on this corner – a few meters away – stood a completely withered H. comperianum. But for the last four years stopping on this corner was never successful, there was nothing to photograph, I only could stare at the remains of eaten – by goats, or crushed – by humans – Himantoglossa, accompanied by some thrown away cigarette packets , plastic bags and goat shit. But this year I’m really lucky: the big orchid is in full flower! Hopefully the ‘farmer’ opposite this corner finally ate all his goats… And where was ‘comperianum’ you are going to ask me. I found 3 in the neighbourhood, at a distant of 20 or so meters, now almost withered but on the 31st of May they were still in full flower.

And because of this remarkable absence of goats there were two other Himantoglossa to admire on this corner this time, although someone had stepped on one of them; it was crushed and half-broken: we had to give it a stick so it could stand up straight. And that was of all Lizard orchids maybe the much talked over H. montis-tauri. But the other one was still healthy, but very small for a H. caprinum. So we had them all three at the same time at the same spot.

The problem with those two ‘real’ Himantoglossa is that they are very small to be H. caprinum or montis-tauri. Also the caprinum I photographed on this same corner on 10-06-2012 was much too ‘petit’ in comparison with the big montis-tauri and caprinum which are growing above Megalochori. But it is possible this small size has to do with the grazing from the goats; the plants never had the opportunity to grow big?
But why was H. agiasense so big? Yes, hybrids can grow bigger but still…

Also – while looking to the upper (reddish) and lowest (green) flowers of Himantoglossum x agiasense – is it maybe a hybrid between H. comperianum, H. montis-tauri AND H. caprinum? And what about the rumours in orchid circles that all Himantoglossa on Lesvos actually have to be renamed H. jankae? And where did this name come from?

RESEARCH: I never heard of H. jankae until I read WERNER HAHN’s article in 2012 ‘Auf den Spuren von Christian von Steven: Orchideen-und Bestäuberuntersuchungen im Krimgebirge 2011 and KREUTZ (2014) ‘Neue Erkentnisse zu den Orchideen Rumäniens’:
MOLNÁR, KREUTZ, ÓVÁRI, SENNIKOV, BATEMAN, TAKÁCS, SOMLYAY & SRAMKÓ (2012): ‘A new name, Himantoglossum jankae, is given to the widely recognized lizard orchid species that is distributed primarily in the Balkan Peninsula and the north-western region of Asia Minor and has been erroneously named H. caprinum in most previous literature. The new species differs from its closest relatives in having the combination of relatively large, reddish-purple coloured flowers and labella that bear red papillate spots and comparatively long spurs. (…) Given that the name H. caprinum remained formally correct when applied to Crimean plants, the confusion was not nomenclatural but rather taxonomic, manifested in the application of a single name to two species. Most importantly, it was the Crimean plant that was not misnamed. Since the name H. caprinum has always been applied to a taxon (although incorrectly circumscribed) that included its type, Art. 57.1 (ICBN; McNeill et al. 2006) does not apply. Consequently, in the absence of an available prior name at the rank of species, a new name must be given to the southeastern European (non-Crimean) taxon, which has erroneously been named H. caprinum in the literature from 1897 onwards. We therefore introduce the following name: Himantoglossum jankae Somlyay, Kreutz & Óvári sp. Nov.’

SRAMKÓ G., MOLNÁR A., HAWKINS J.A., BATEMAN R.M. (2014): ‘Molecular phylogeny and evolutionary history of the Eurasiatic orchid genus Himantoglossum s.l. (Orchidaceae)’. In their Key Results: ‘Among more controversial taxa of the H.hircinum-jankae clade, which are only subtle morphologically divergent, topological resolutions were poorer and topological in congruence between datasets was consequently greater.’ And one of their Conclusions was: ‘However, confident circumscription of the more derived species of Himantoglossum s.s., including local endemics of hybrid origin, must await future morphometric and population-genetic analyses.’

So now H. jankae is the new H. caprinum if I understand all this correctly and to top it off there are 3 new nomenclatural novelties and yes it can be done; 3 times your name behind 1 orchid….

Himantoglossum jankae SOMLYAY, KREUTZ & ÓVÁRI subsp. robustissimum (KREUTZ) KREUTZ comb. nov. Only in the north-west of Turkey in the province Akara and Bolu.

And I have high hopes that soon there will be Himantoglossum jankae SOMLYAY, KREUTZ & ÓVÁRI subsp. montis-tauri (KREUTZ) KREUTZ 2015. In the south of Turkey and on Lesvos. 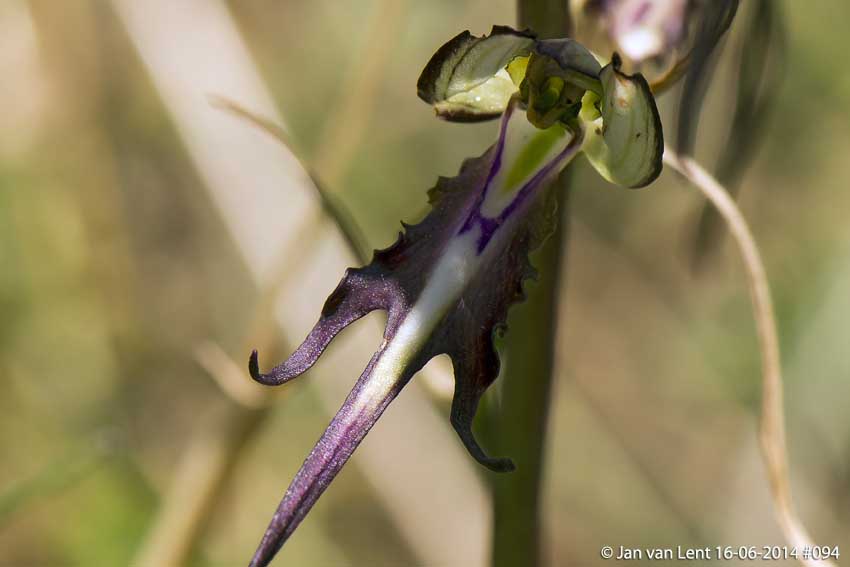 BOTTOM-LINE: Why suddenly all this renaming by KREUTZ, BATEMAN and a group of Hungarian orchid researchers with as result the changing of the Himantoglossum hircinum group into a jankae group and H. caprinum into H. jankae? Is this because in 1882 BOISSIER did not described the difference between a lip with and without spots/stripes properly? Well, in that case – after very profound research – maybe all orchids can be outlawed and renamed by KREUTZ, BATEMAN and so on.

For years it was known that there were five big Himantoglossa growing on Lesvos – unique for an island in the Aegean: H. robertianum, H. comperiana and from the H. hircinum group H. caprinum – red/purper; H. montis-tauri - green/brown and H. affine - without dots/stripes on the lip. Well, the existence of affine was always unsure because one year there was one Himantoglossum without dots & stripes, and the next year it was gone again, and so as much as I like to find a real H. affine, I don’t think the photograph of the one above is the ‘real’ thing, probably it is just another hybrid.
But now we have a fourth possibility: Himantoglossum jankae. Or did I maybe understand this new name so generously given to us by MOLNÁR, KREUTZ, ÓVÁRI, SENNIKOV, BATEMAN, TAKÁCS, SOMLYAY & SRAMKÓ wrong? 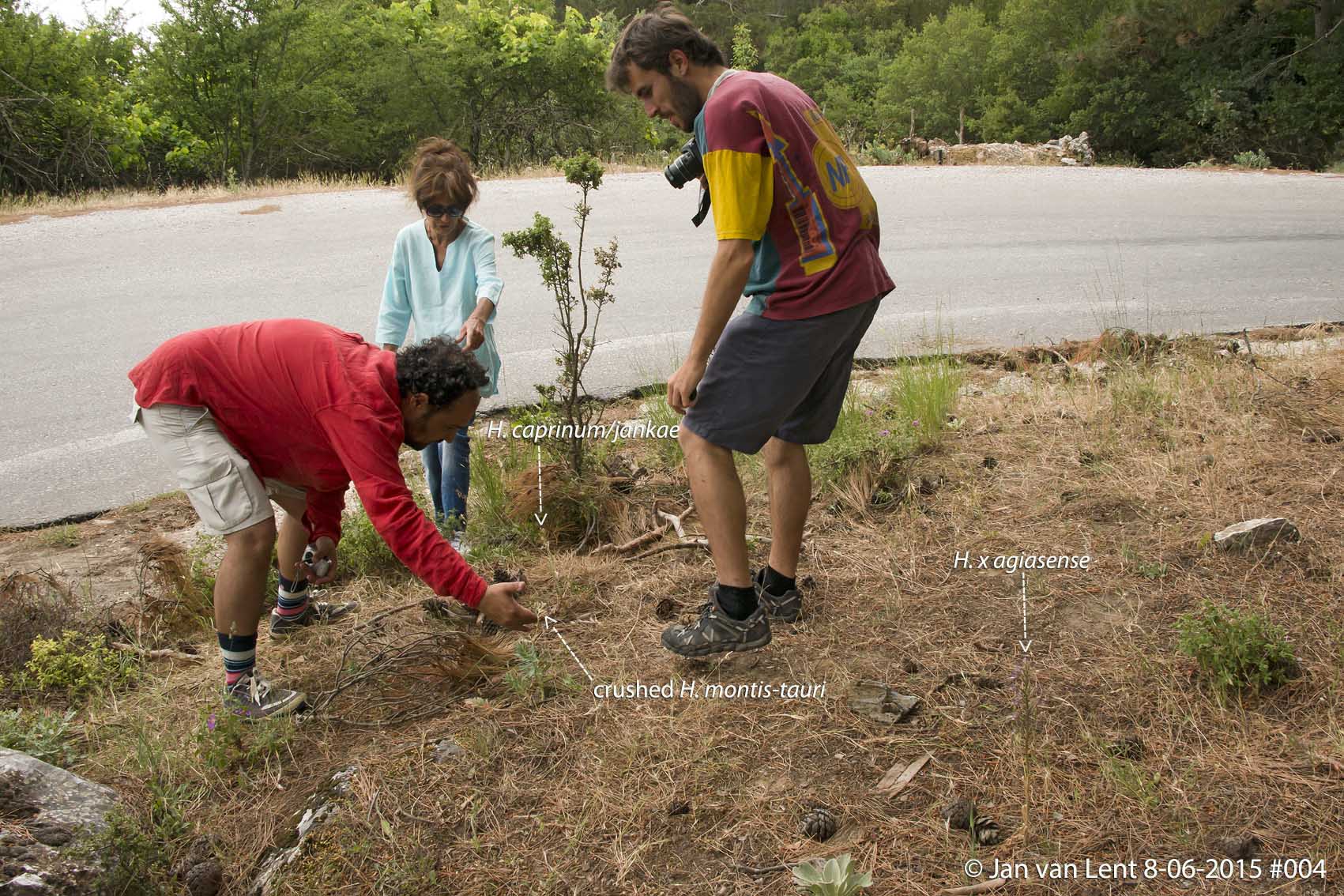 Therefore I put my ear so close to the crushed montis-tauri that I could hear it whispering its last words: ‘Please KREUTZ don’t rename me again!’ But maybe it was just my fantasy or the sound from the strong, hot wind blowing through the pine trees. When we drove away and looked back a branch broke off from a pine tree and fell over this poor Himantoglossum montis-tauri; first crushed, then an attempt to rename it and now finally silenced…