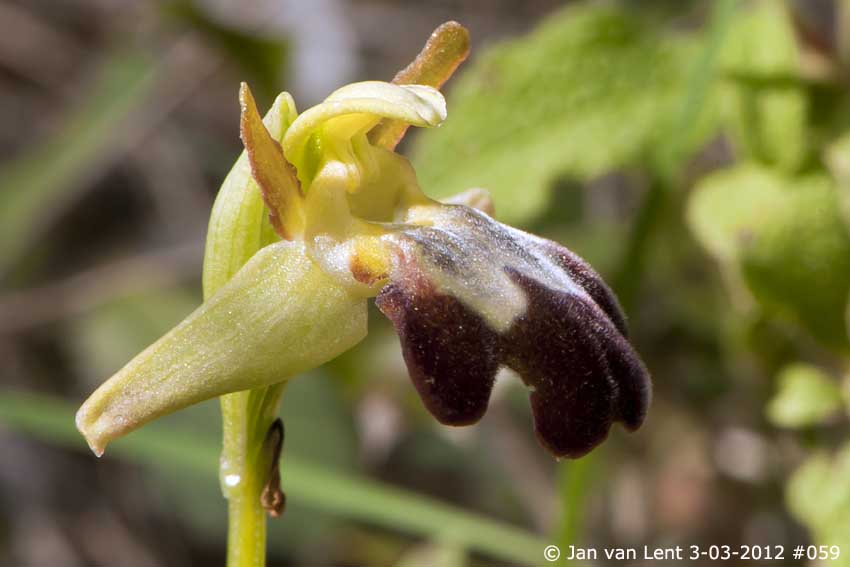 REMARKS: The Ophrys fusca-lutea complex (= section pseudophrys) and the Ophrys oestrifera complex (section euophrys), are the two most difficult complexes of Orchids on Lesvos to distinguish. And I think not only on Lesvos… Before I write about the first flowering Ophrys of this fusca-lutea complex on Lesvos, Ophrys sitiaca above Alifantá, I first will make some remarks about this complex which has been driving me crazy for years now. And it is not only those Ophrys which are giving me headaches but also the constant changing of names and opinions about this complex. Let’s start 5 years ago, in 2007. I then started photographing the different species within the (at that time named) Ophrys fusca group. Today this group is called the Ophrys leucadica group after the ancestor Ophrys leucadica. In between there was a period of time that most orchidologists called this group of plants Ophrys fusca s.l.. (Sensu lato: ‘in the wide or broad sense of’). After Ophrys fusca was said to be a West-Mediterranean plant, you can call all those plants now of course Ophrys leucadica s.l. but that did not satisfy me. There are so many different forms inside this group that for instance DELFORGE (2005) decided to differentiate this whole pseudophrys (fusca-lutea) complex into 12 groups for Europe and ANTONOPOULOS (2009) made 6 groups for Greece: The iricolor group, the fusca group, the attaviria group, the blitopertha group, the lutea group and the omegaifera group. Okay, clear enough for me to determine those Ophrys here on Lesvos, I thought. 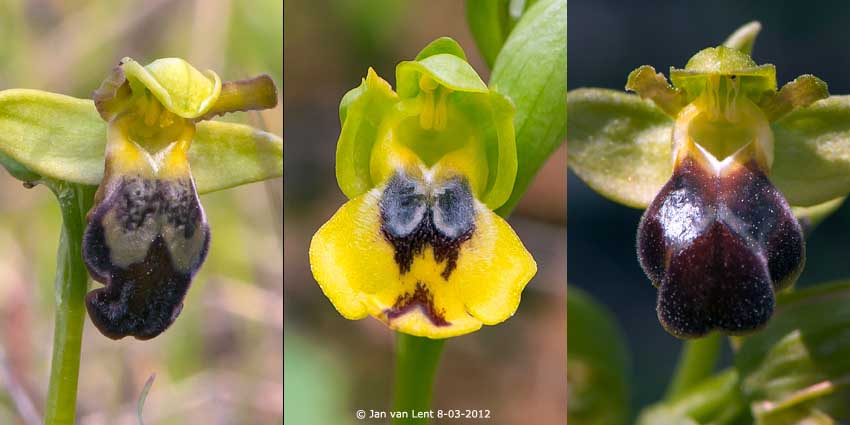 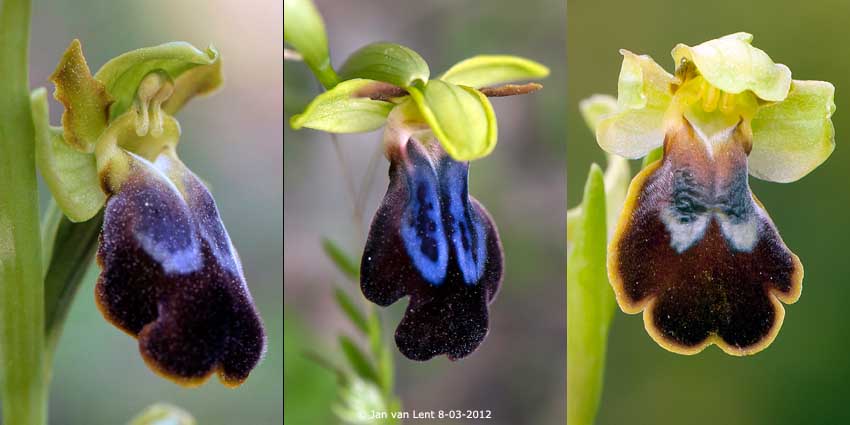 But in these last 5 years I did not encounter a species of the omegaifera group on Lesvos except of course for Ophrys sitiaca, the earliest flowering species that also has (in most habitats on Lesvos) some of the characteristics of the other groups. And here the problems start because this Ophrys has the typical shallow V-shaped groove at the base of the lip whereas the other members of this omegaifera group have no V-shaped groove at all. Why then place this species in this group? And didn’t I hear rumors during the last months that there is actually no Ophrys sitiaca and no Ophrys leucadica on the island but that they are misidentified Ophrys pelinaea? “Tuf, tuf, tuf”, we say on Lesvos, maybe the same expression as “you must be joking” in English. Wasn’t Ophrys pelinaea said to flower late, in April and May? And didn’t have Ophrys pelinaea a large flower with a lip length between 13 and 20mm? And where can I find the ‘large, round middle lobe’ of pelinaea on ‘my’ sitiaca? Well, the sitiaca below are round in the sense that the lip folds down on the long axis, like a very tiny boxing glove and the side lobes are folded down under the lip. But there are more species in the fusca-lutea group whose lip look like a boxing glove. As for instance Ophrys leucadica and Ophrys cinereophila. 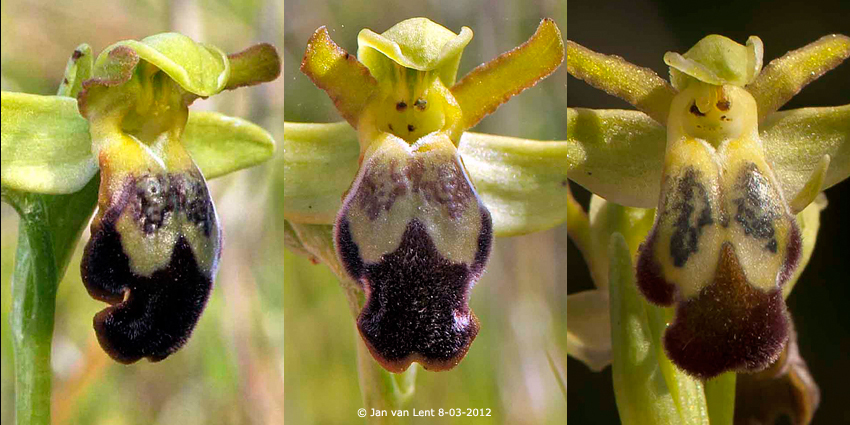 In my opinion a lot of problems with identification in this ‘early’ fusca-lutea complex have to do with this species (Ophrys sitiaca) in hybridisation with members of the other groups, depending on the habitat (circumstances), the surrounding Ophrys and the pollinator. But there is one more reason for confusion: the time of flowering. Living on Lesvos for the last 10 years (also in the wintertime) I observed that there is, every year, a dramatic difference in flowering time due to weather conditions. The difference in flowering times (of the same orchid on the same habitat) between one year and another can be more than 5 weeks!

BOTTOM LINE: Back to the two Ophrys I photographed above Alifantá a few days ago. If you compare those species with the ones from last year on exactly the same habitat and spot) you see that their lips are not so much folded down. They look more like Ophrys leucadica on the same spot last year, 3 weeks later, on 22-03-2011. Again I got confused, so I went back a few days later, after 2 days of rain. To my enjoyment they had now 3 flowers but I’ve noticed that their lips were more down folded than 3 days ago; so they looked more like Ophrys sitiaca this time! I think it’s time to take some boxing lessons! Maybe that I can recognize them better after a good ‘bang, bang’ against my head… 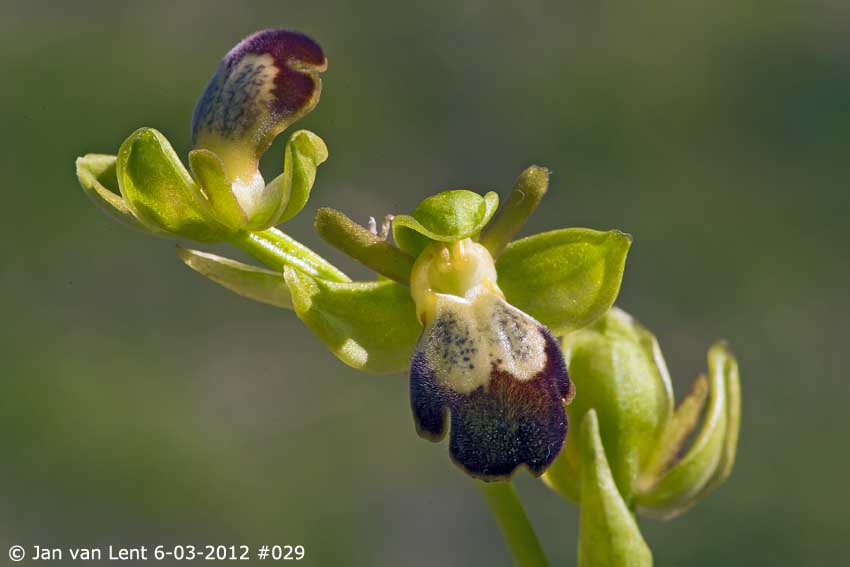 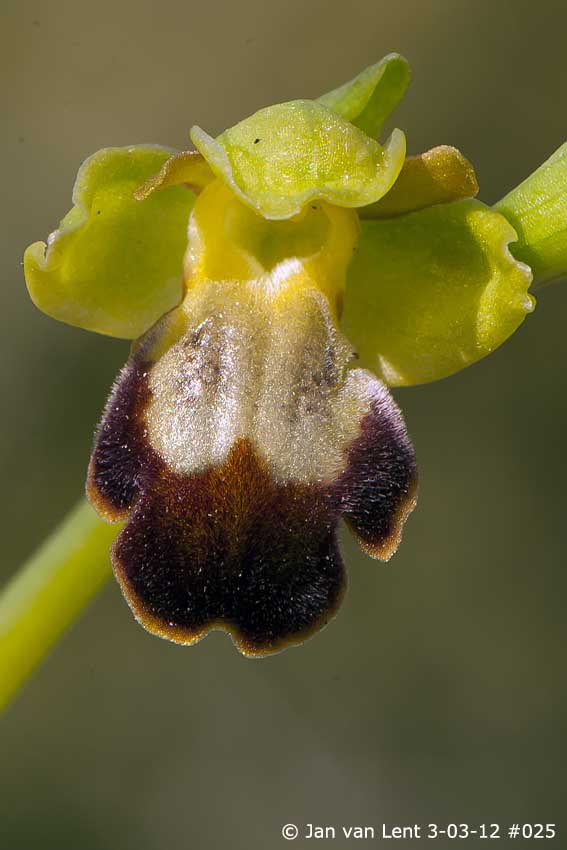 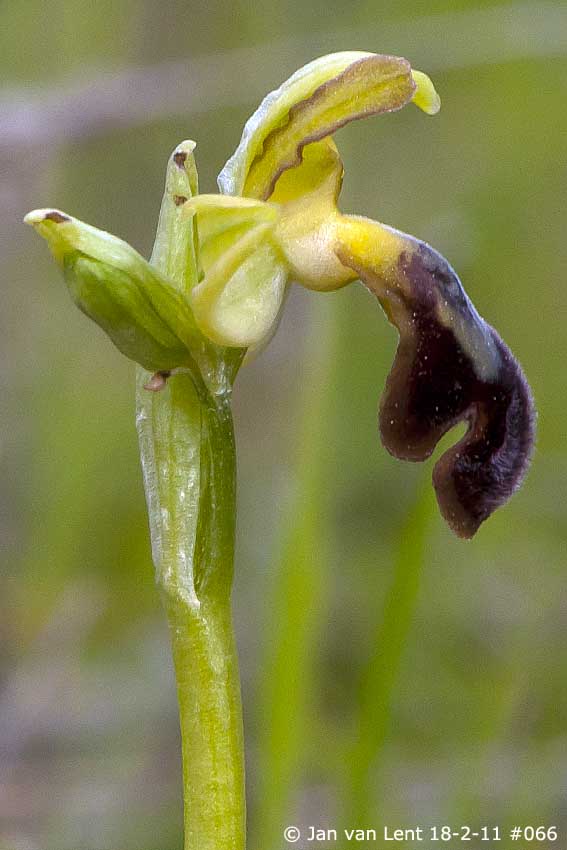 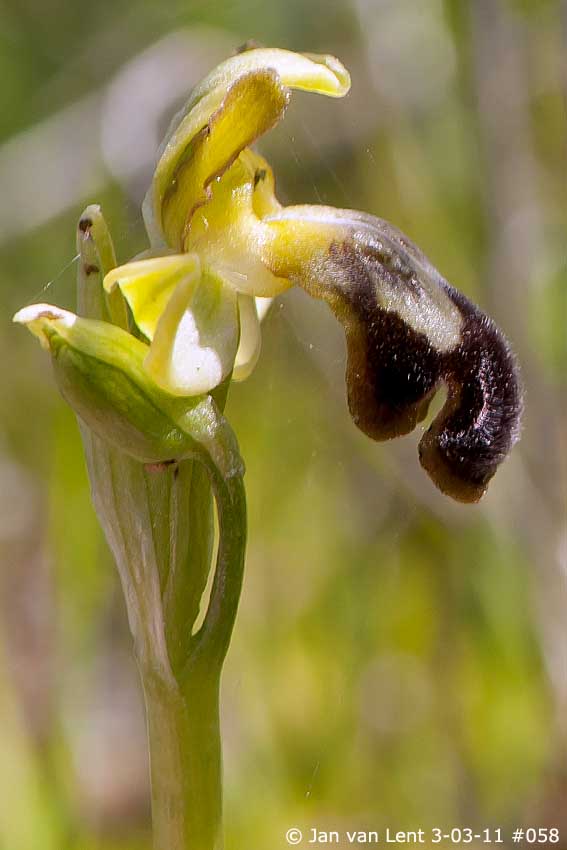 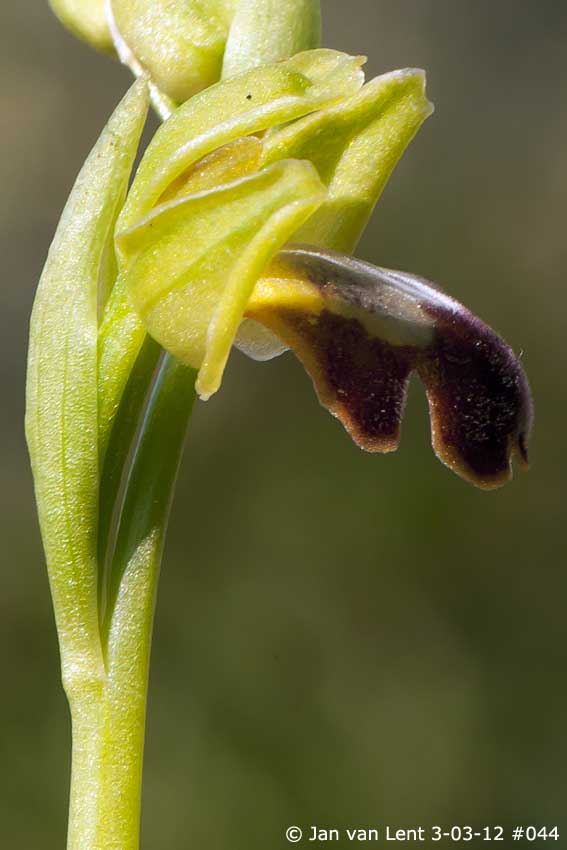 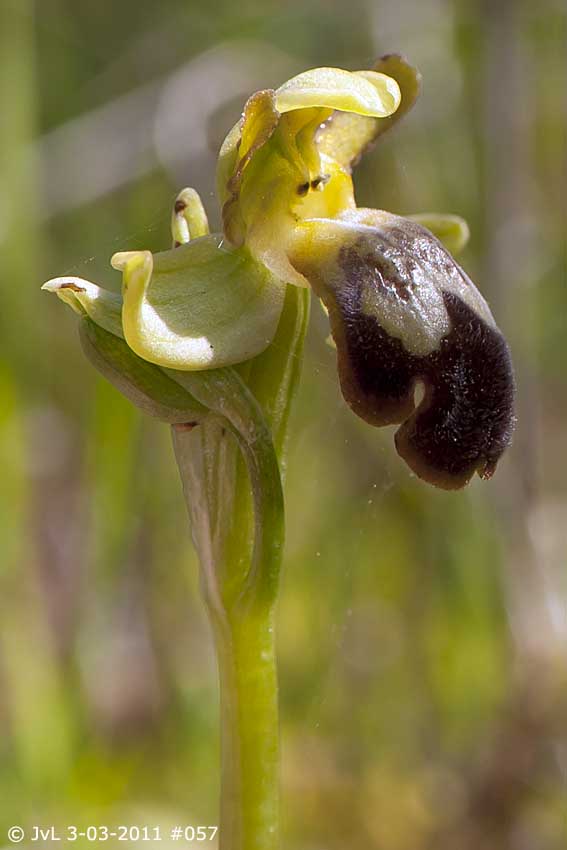 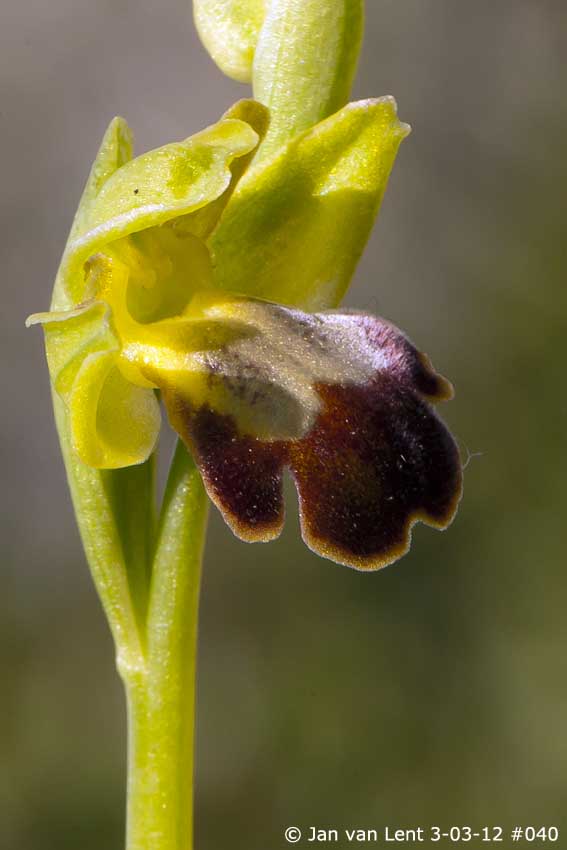 WEATHER CONDITIONS:       2010 was an extremely early year for orchids to flower, the first Ophrys sicula (this is the first flowering species in Eftalou, my habitat) was there at the beginning of February (due to a lot of rain during December-February combined with high temperatures), the year 2011 was a late 'Orchid' year due to a warm December and January, followed by cold weather and the first rain in the end of February, so the first Ophrys sicula flowered in the beginning of March, one whole month later. This year (2012) the situation is again more difficult because after photographing and writing about the first Ophrys sicula (see 'The fist Orchid in 2012 is'?) in Eftalou on the first day of spring (I thought at that time), we got one week of very cold days and three nights of frost, so in the last 10 days no new Ophrys appeared in Eftalou and 'my' first sicula flower passed away in a cold death. 2012 will be a 'very' late year for Orchids on Lesvos!