Habitat: Kafkares & Sarakina, on the road to Palios.

HABITAT: After days of rain, harsh winds and cold temperatures, the weather is again back to being ‘Greek’, because for the last week it was more like ‘English’. So I went out to the most north-east part of the island, to Palios, which means ‘old’ in English. Palios is now a very tiny fisherman’s village and harbour; in wintertime nobody is living in this remote village anymore. In the old times Palios was a very important place, on this spot the pilgrims arrived on boats from across the sea (12 km), from what is now Turkey, earlier the Ottoman empire and before that a part of Greece. It was so important that it had its own castle where the pilgrims – who wanted to visit the Taxiarchis monastery – had to pay tolls before going on their way to Mandamados. Today only the stone walls remain from this once so important castle. Also nature in this whole area along the coast between Ag. Stefanos and Palios is very special: big red volcano stones are scattered through the landscape, and in winter and spring there is a lot of water around. But the hundreds of holes with stagnant water, pools, springs, watercourses and swamps are drying out by the end of May and only some deeper ponds remain. Because of all this water plants also grow here in abundance. At the end of March this whole area is covered in purple by the French lavender (Lavendula stoechas). 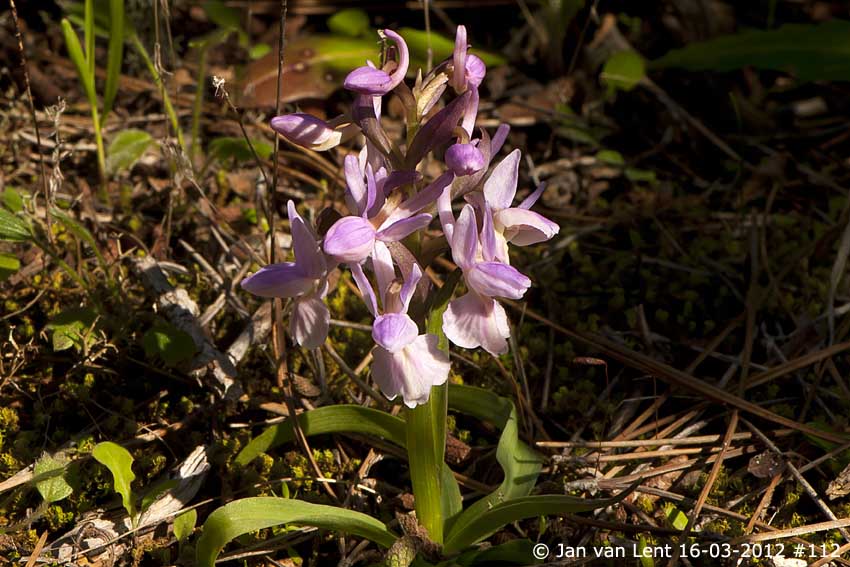 HUNTING: But yesterday nature here was just awakening. No Lavender, no Sage-leaved Cistus (Cistus salvifolius), no Annual Rockrose (Tuberaria guttata), no Orchis morio and not even the special, normally always present bird, the Ruddy shelduck (Tandorna ferruginea) was yet around. On 21 February last year I already found hundreds of Orchis, Serapias and Dactylorhiza so I was surprised that I could not find one plant, one Orchid in flower now! So I went deep into the bush, got wet feet when they sank into mud in a swamp and after one hour or so searching finally discovered a small pink Dactylorhiza romana. And small it was, just 16 cm high, so between the bushes it was hard to see. In comparison with the Orchid of my last blog, Ophrys sitiaca, there is no problem at all to indentify this Orchid because there is (as far as I know) only one Dactylorhiza around on Lesvos: Dactylorhiza romana. 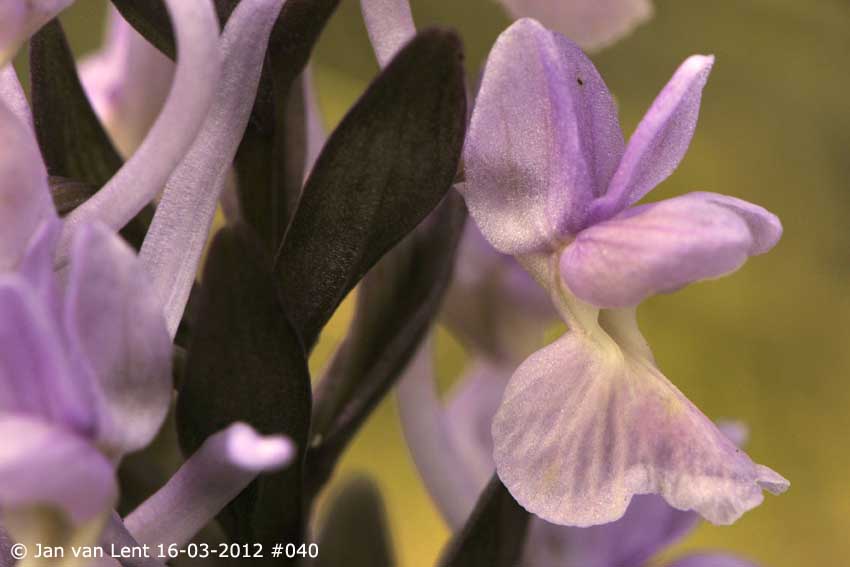 RESEARCH: Thank goodness I have to say, (or deadly boring is also possibly) because the genus Dactylorhiza has in Europe 70 species, subspecies and variations according to BAUMANN/KÜNKELE/LORENZ (2006), but 236 species, subspecies and variations according to DELFORGE (2005). And between 2005 and 2010 a German orchidologist came with a list of 16 new discovered or newly described Dactylorhiza species. On Lesvos the only confusion could be in the naming because in 1980 SUNDERMANN used the name Dactylorhiza sambucina subsp. pseudosambucina Tenore 1815. And that could cause confusion with Dactylorhiza sambucina (L.) Soó 1755, but this species with the big leaves and the downwards pointing spur I didn’t encounter yet on Lesvos. (Even the Black Elder tree (Sambucus nigra) is not around on Lesvos, a pity, no Sambuca liquer, no marmalade, no wine or syrups from this tree.) 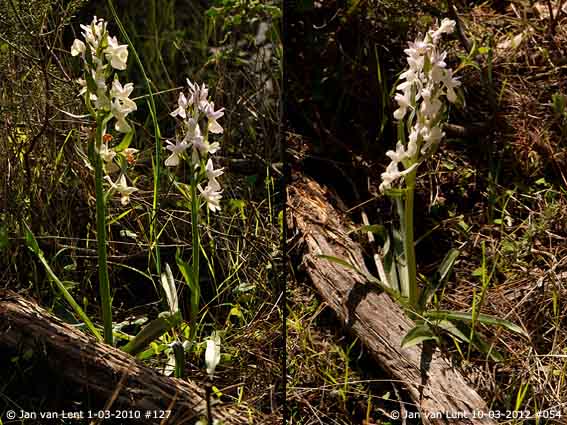 So the only confusion that could remain is maybe its colour because Dactylorhiza romana is a plant with a lot of colours. Those colours are everything between white/yellow and red. These colour variations have (of course) also a name: for instance ‘sulphurea’ sulphur = greenish yellow; ‘incarnata’, flesh coloured and ‘bicolor’, two colours. What I missed in this list is ‘albiflora’ white blooming for the pure white species. I remembered having photographed a white and a bicolour version on a spot called Sarakina, a few hundred meters down the track to Palios and a hundred meters into the pine forest, two years ago. Then, two beautiful big Dactylorhiza romana were presenting themselves behind a fallen branch. And yes, one of them was today also present, not so big as last year, then 30 cm high, now a small 20 cm. But okay, it was there, but a bit lonely as I must say. 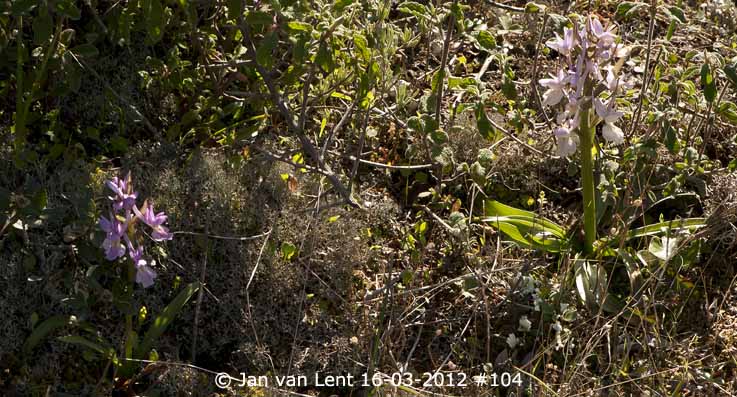 On the other side of the sea, in Turkey, just a few kilometres away, there are at least 12 species of Dactylorhiza growing (KREUTZ 1998). Oddly enough there are not many or even no Dactylorhiza left on Rhodes and Karpathos, but Crete still has them (KRETZSCHMAR 2004). The Roman Cuckoo Flower grows in abundance on Cyprus, but only the yellow variation (KREUTZ 2002). SALIARIS and DELFORGE discovered in 2007 (Natural. belges 88, Orchid. 20) that Dactylorhiza romana was present on Psara (the island on the north-west side of Chios) and/or Inousses (the island on the north-east coast, between Chios and Turkey) but absent on Chios itself KARATZAS (2008) produced on Lesvos 7 habitats for Dactylorhiza romana and a ‘White Roman’ (albiflora) variation in the south hills on the Gulf of Gera.

BOTTOM-LINE: I think that splitting up Dactylorhiza romana into varieties according to their ‘true colours’ is not opportune because all those colour variations are actually a characteristic of the Roman ‘Cuckoo’ Orchids; red, pink, yellow and white or two colours in the same flower: ‘bicolor’. So the ‘Romans’ are still on Lesvos, not only around Palios but for instance also above Mixou (Mychos) in the south of the island, above Klapados (Lafionas) in the north and high on the Prof. Ilias above Parakila in the west. 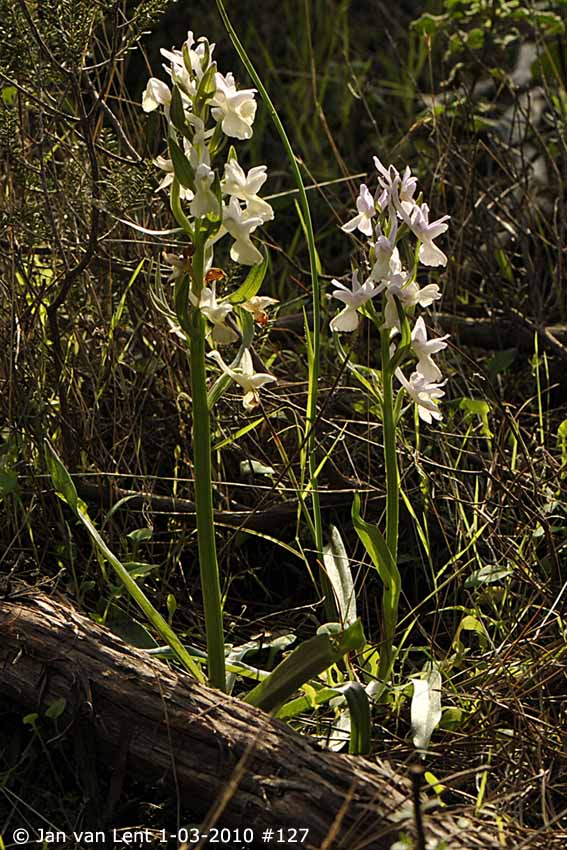 SHORT DESCRIPTION: The Roman Cuckoo Flower doesn't have spots or lines on its lip, it has a cylindrical, erect spur, which is much longer than the ovary and points steeply upwards. This upwards pointing spur is also the difference with Dactylorhiza sambucina, which looks very much the same but has a downwards pointing spur. The leaves of Dactylorhiza romana are narrow and lanceolate, and don?t have spots. The big bracts are green to violet green, the upper bracts are as long or slightly longer than the flowers 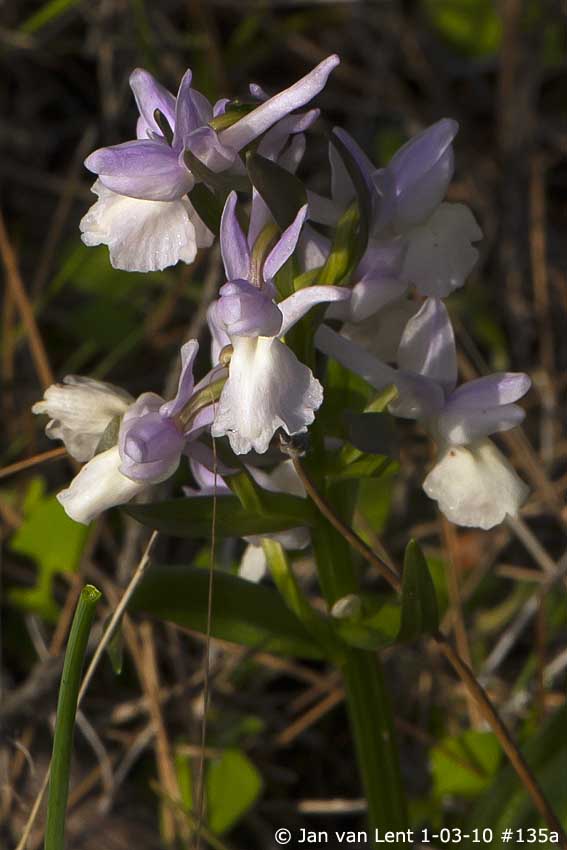 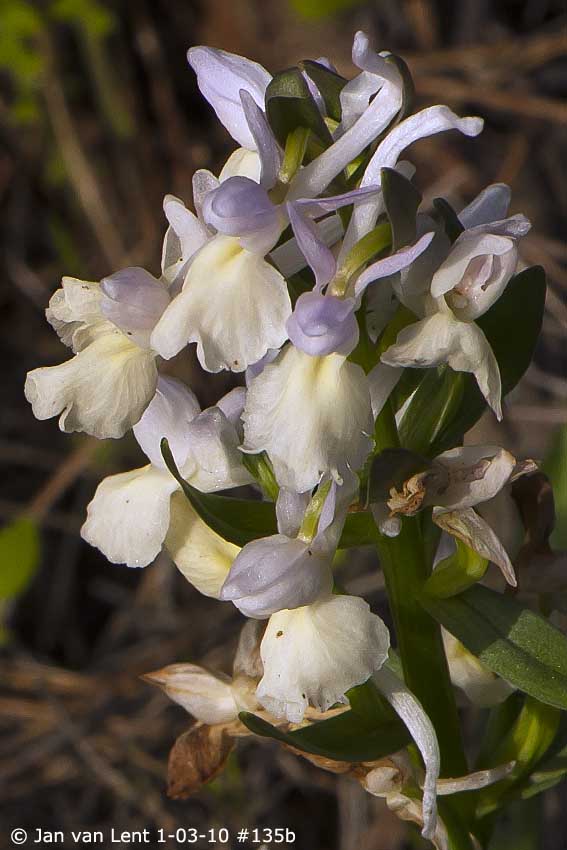 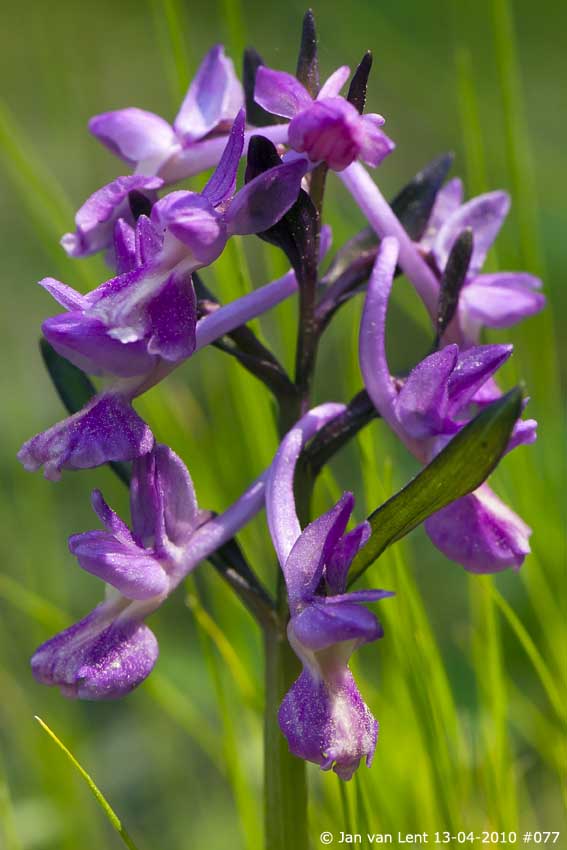 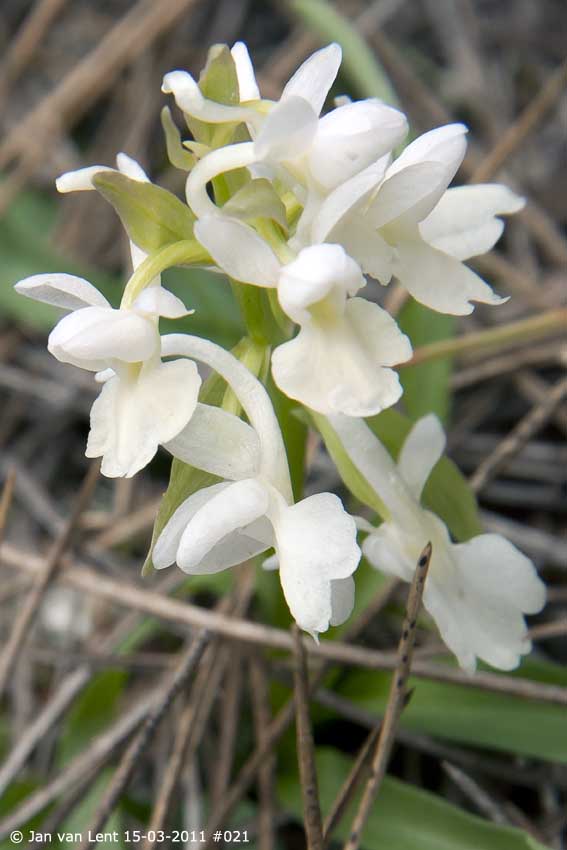 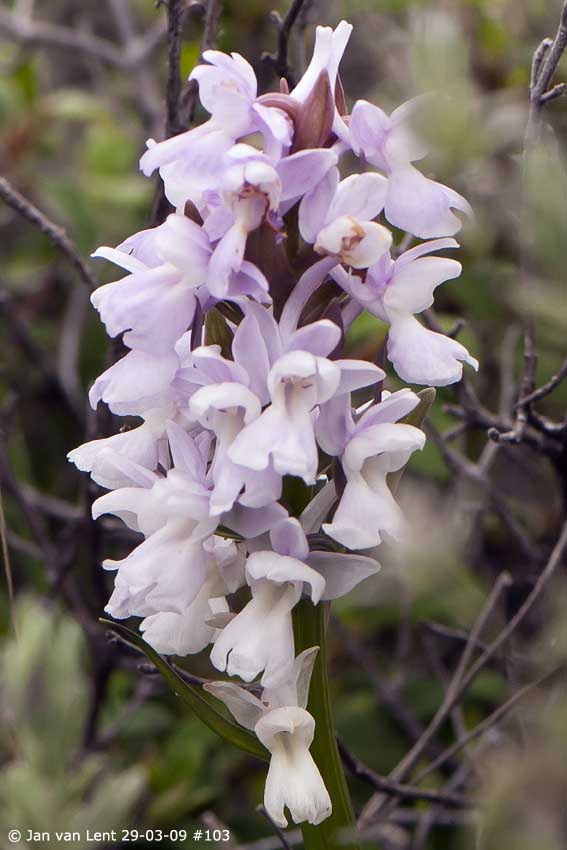