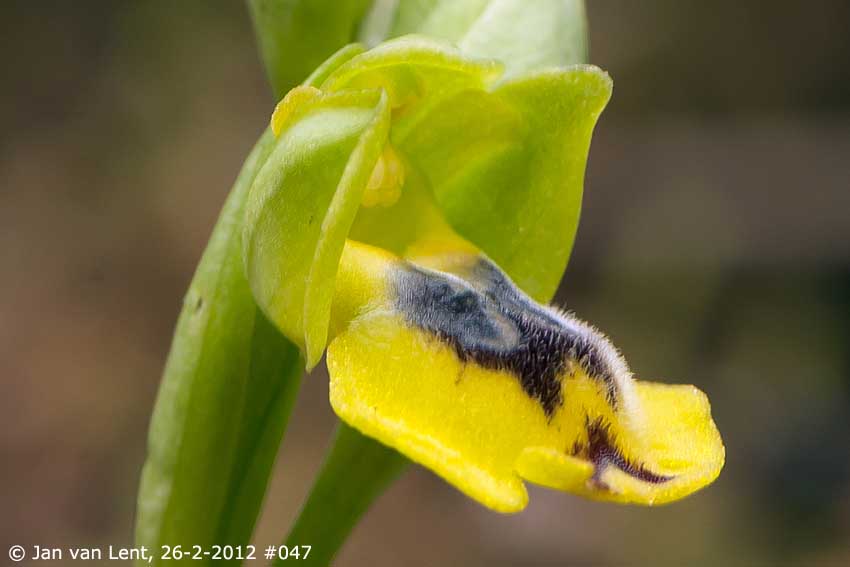 HUNTING. Every year in February or March the first wild orchids arrive in the phrygana or in the abandoned Olive groves in Eftalou. Eftalou is situated a little bit to the east of the medieval village of Molivos, in the North of Lesvos. Here I live and work. Every year it is a surprise which orchid will arrive first, Ophrys sicula, Ophrys mammosa or Ophrys speculum (or synonym: Ophrys vernixia var. orientalis) and when: in the middle or end of February or in the beginning of March. This depends on the quantity of rain and sun in January and February. Actually there can be three weeks difference from one year to another. When they arrive in mid February it will be an ‘early’ year, when they arrive in March it will be a ‘late’ year. But today it is nearly the end of February and it feels already like spring. Everywhere you look now there are anemones in white, rose, red, purple and blue and red. But I am looking for orchids, not anemones. And I know of course where to look, this is my ‘home’ land; I walk here every day and every year eight to ten different orchids species occur. The rosettes are already getting small stems so it is now just a question of days before they will arrive. 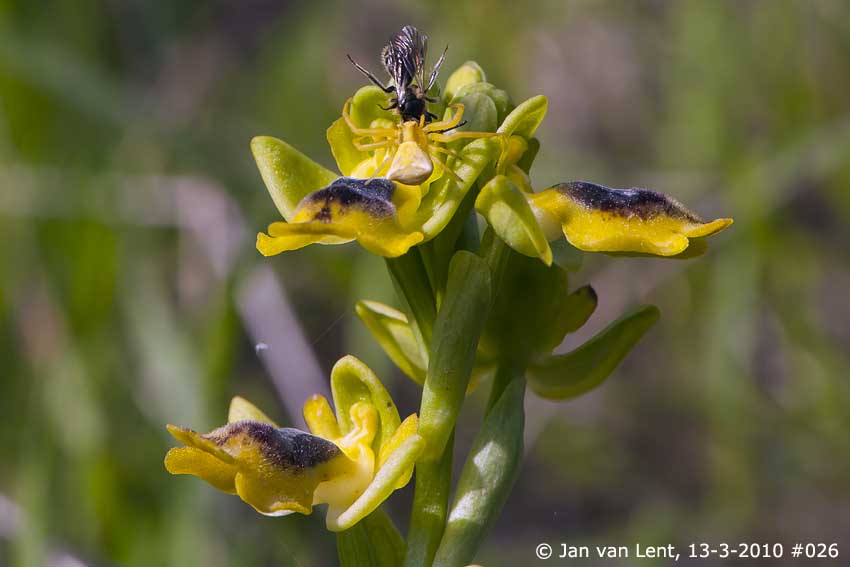 Two years ago an Ophrys sicula next to an old almond tree, which had once been hit by lightning, won the race but not this year, because on this habitat they’re getting smaller and smaller every year. Last year the first sicula arrived a few weeks later, in the shelter of some old Funereal or Italian Cypresses (Cupressus sempervirens). I’ve noticed for weeks now on the west end of the fields, in between hundreds of not yet flowering bushes Spanish Broom (Spartium junceum), a lot of very big rosettes of, I think, Ophrys sicula. And yes, today the first sicula is there! Only one, and not the one with the biggest rosette but one alongside a small path I cut through the Spanish Broom to reach some new habitats where I maybe could find new orchid species. Those fields here have not been ‘done’ the last 20 or more years. So I have to slam, chop, cut and saw myself a way through not only the Spanish, but also through the very Thorny Wooly Broom (Calycotome villosa), the Shaggy Cistus (Cistus creticus), prickly, wild olive trees, and the new growing, young pines; it’s really a wall there which you have to get through. But, there it is, the first orchid of 2012!

And this is an Ophrys sicula and not an Ophrys phrygana. With those big yellow borders of the lip, the almost horizontal standing flower (because the lip is NOT folded at the base), the tuft of hairs on the lip, the small upside down V on the tip of the lip and the metallic or blue shining blazon. I am sure, this is Ophrys sicula! 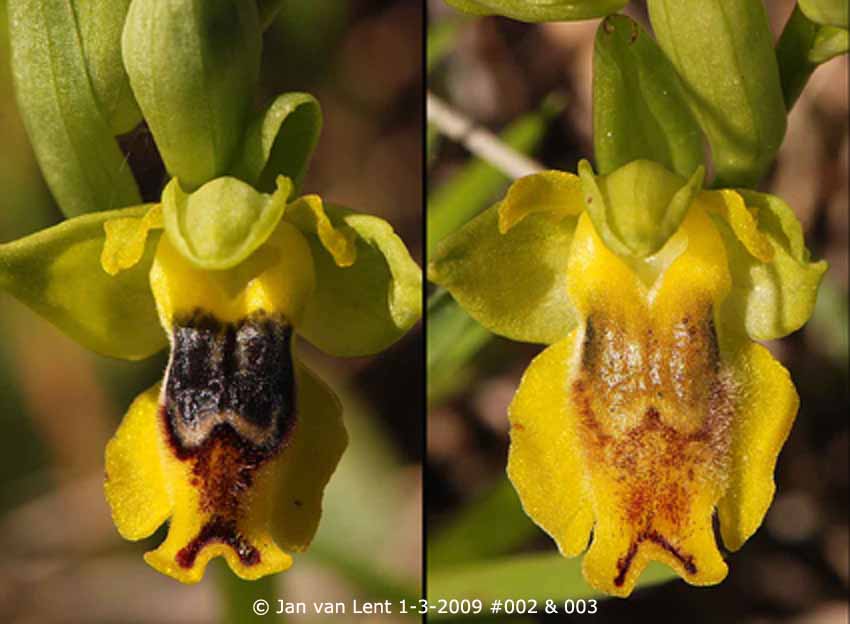 BOTTOM-LINE: It is all about names. On Lesvos (in the Eastern Mediterranean) there are two different species of the lutea group. The one species almost the same as Ophrys lutea but a lot smaller and with less yellow on the lip is Ophrys phryganae, blooming between the end of March/beginning of April until the end of April. The only other ‘yellow’ species which is flowering on Lesvos is Ophrys sicula, the former Ophrys lutea ssp. minor, galilaea, murbeckii, which blooms from the middle of February until the middle of May. And Ophrys sicula is abundant on Lesvos, Ophrys phryganae is more rare; until now I found it only on a few locations (Alifantá, Mixou, Mt. Spathi) in April. 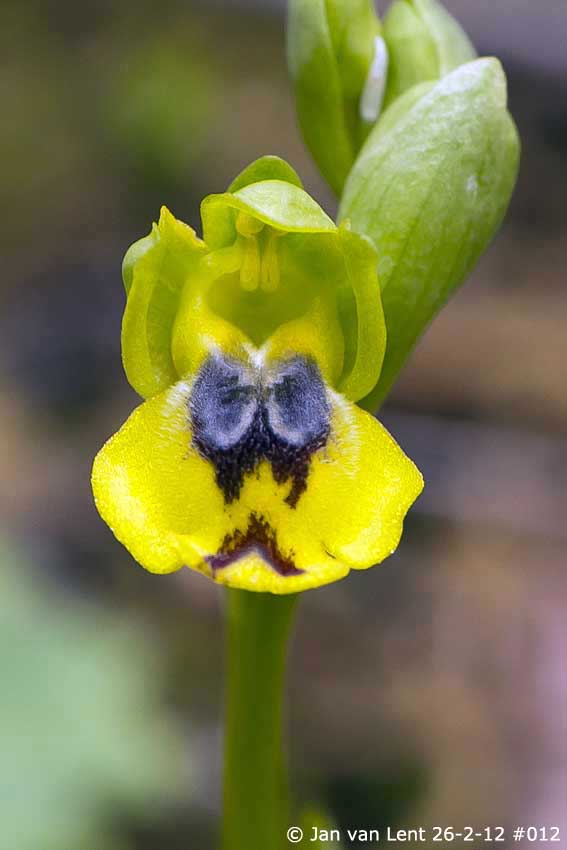 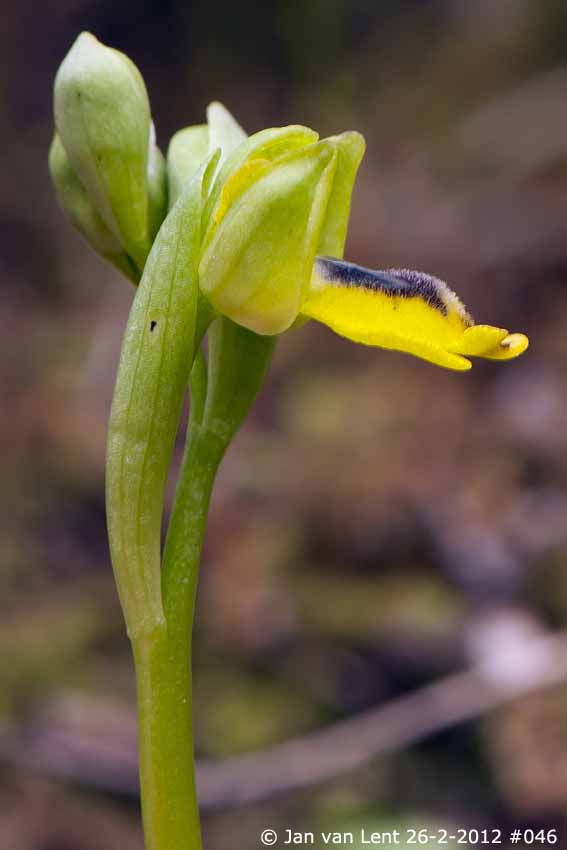 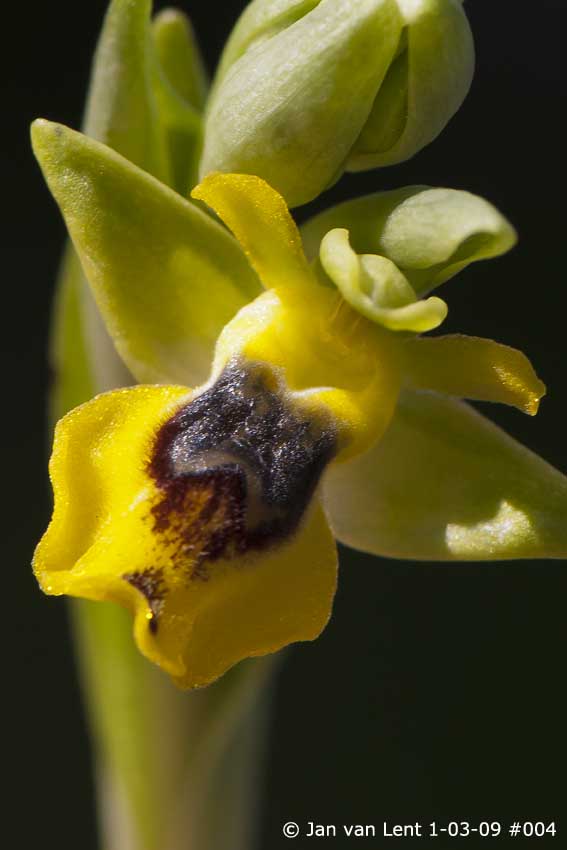 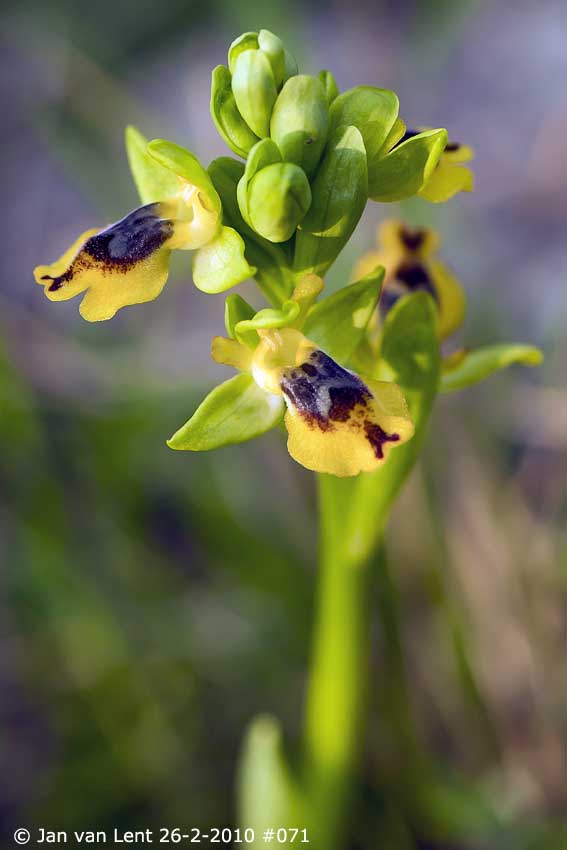 Ophrys phryganae J. Devillers-Terschuren, & P. Devillers, 1991, (above) is also on Lesvos more rare than Ophrys sicula. The difference is not so much the size of the lip (sicula 8-11mm, phryganae 10-13mm?) but the more vertical position and the 'knee' at its base and the big brown speculum or blazon on the lip. Because of this curved shape the lip looks like a small boxing glove (as in the omegaifera group). 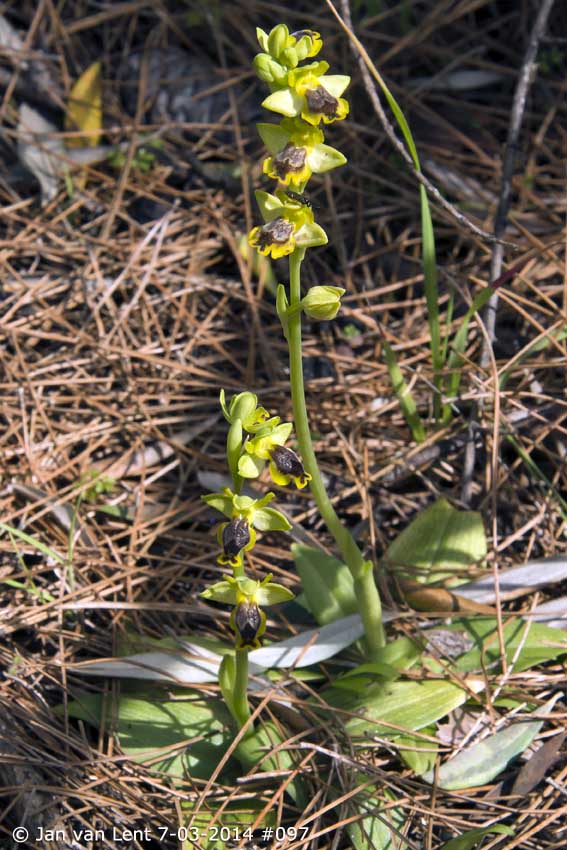